Treasures of the Aegean

What happened to the Minoan civilization? Join parkour master Marie Taylor and treasure hunter James Andrew in a historical action thriller, as they unveil the secrets of a forgotten kingdom which has been tragically trapped in and endless time loop. Explore a beautifully hand-drawn non-lineal open world, recover valuable relics, chart a lost island, and gather new clues in every loop to complete an ancient prophecy. Solve the riddles and mysteries that angered the old Gods, on your quest to prevent history from repeating itself forever.

> A Dashing Duo: Marie Taylor and her associate historian James Andrew are a treasure-hunting team on the search for ancient relics and adventure!

> Time Loops & Puzzles: Exploit a glitch in time to secure information on a persistent map and solve key puzzles, before the world blows up and the loop restarts!

> Discover Another World: Hidden in the depths for several millennia, the island of Thera is full of historical treasures to collect and mysteries to decipher.

Treasures of the Aegean is a clever and exciting adventure that's fresher than the salt-scented seas of the Mediterranean. It might not be the brightest gem on display - but even with it's dust-crusted stumbles, it's a unique rarity that's worth your time.

It’s not often you get to see a game take risks, even in the indie scene. Treasures of the Aegean from from publisher Numskull Games and Spanish developer Undercoders is one such daring game; it doesn’t just mash together existing ideas in exciting ways, but does so with a reasonable amount of success.

Inspired by the real-life islands of the Aegean sea, the game takes place on the coasts of Santorini when an explosion causes the long-lost island of Thera to resurface from the waters beneath. Thus, our protagonist Marie Taylor must take a break from her vacation and team up with her treasure-hunting partner James Andrew; both set out to find the truth behind this mysterious isle that was once home to the ancient Minoans. Unfortunately for Marie and James, something more sinister is brewing in the background; the duo are trapped in a time loop, causing them to endlessly repeat trips to the island leading to the explosion of the Therian volcano. The only way to break out? They must uncover the secret behind the Minoans and their prophecy.

The game takes place across different timelines. There’s the present-day exploration sections on Thera; and then the flashback segments that explore Marie’s beginnings in her profession, as well as her relationship with other characters in the game.

Welcome To The Jungle: 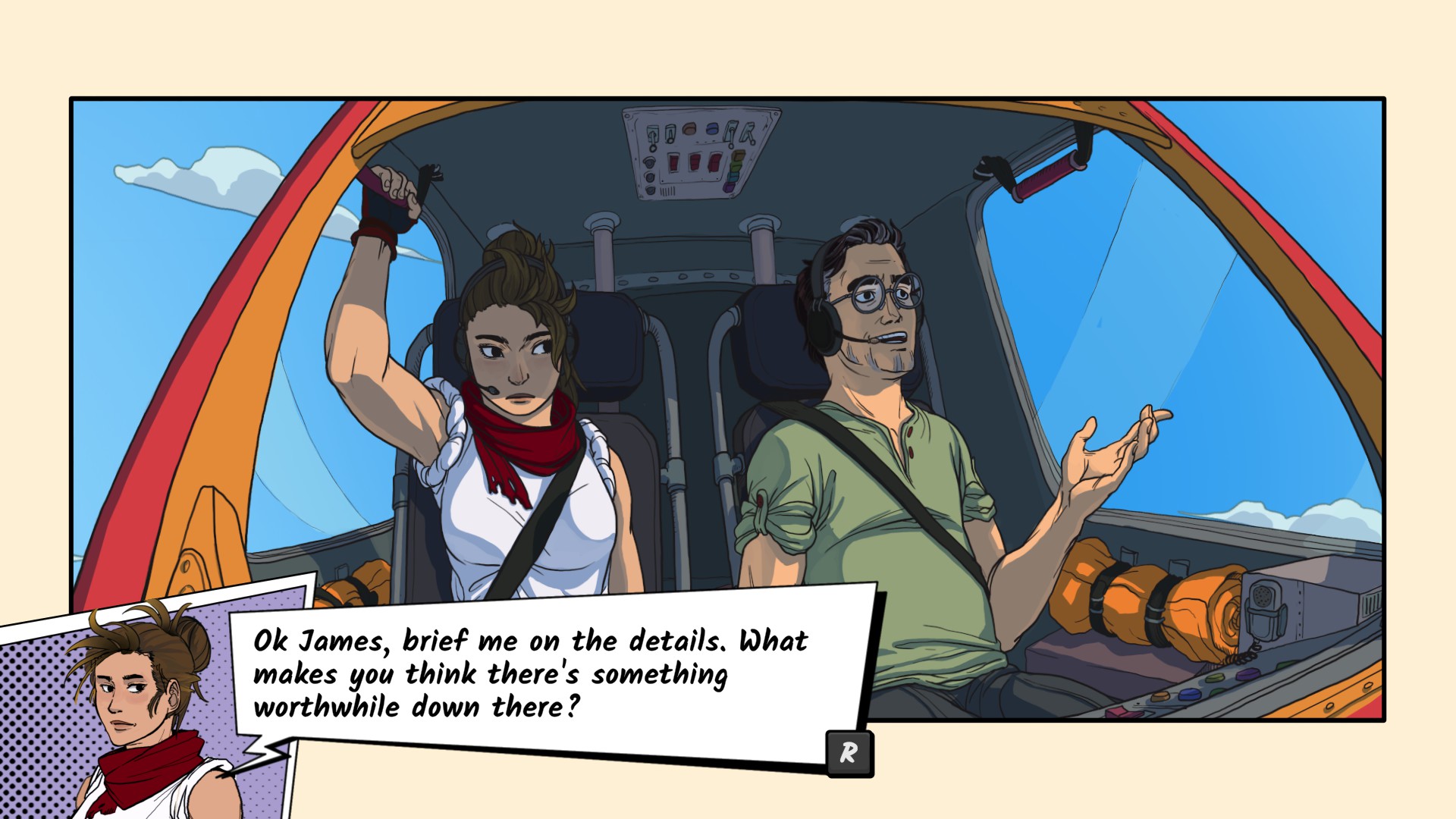 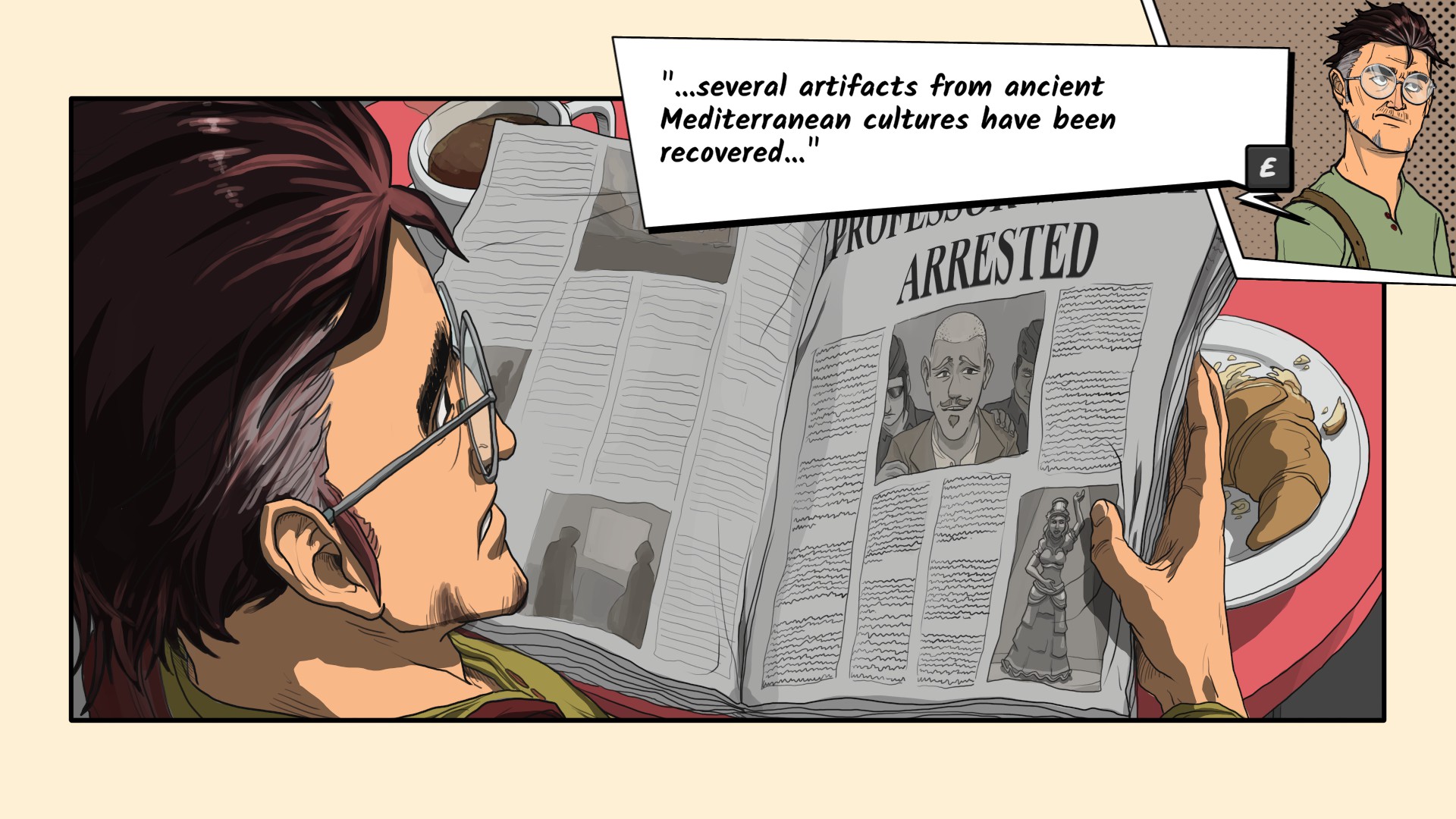 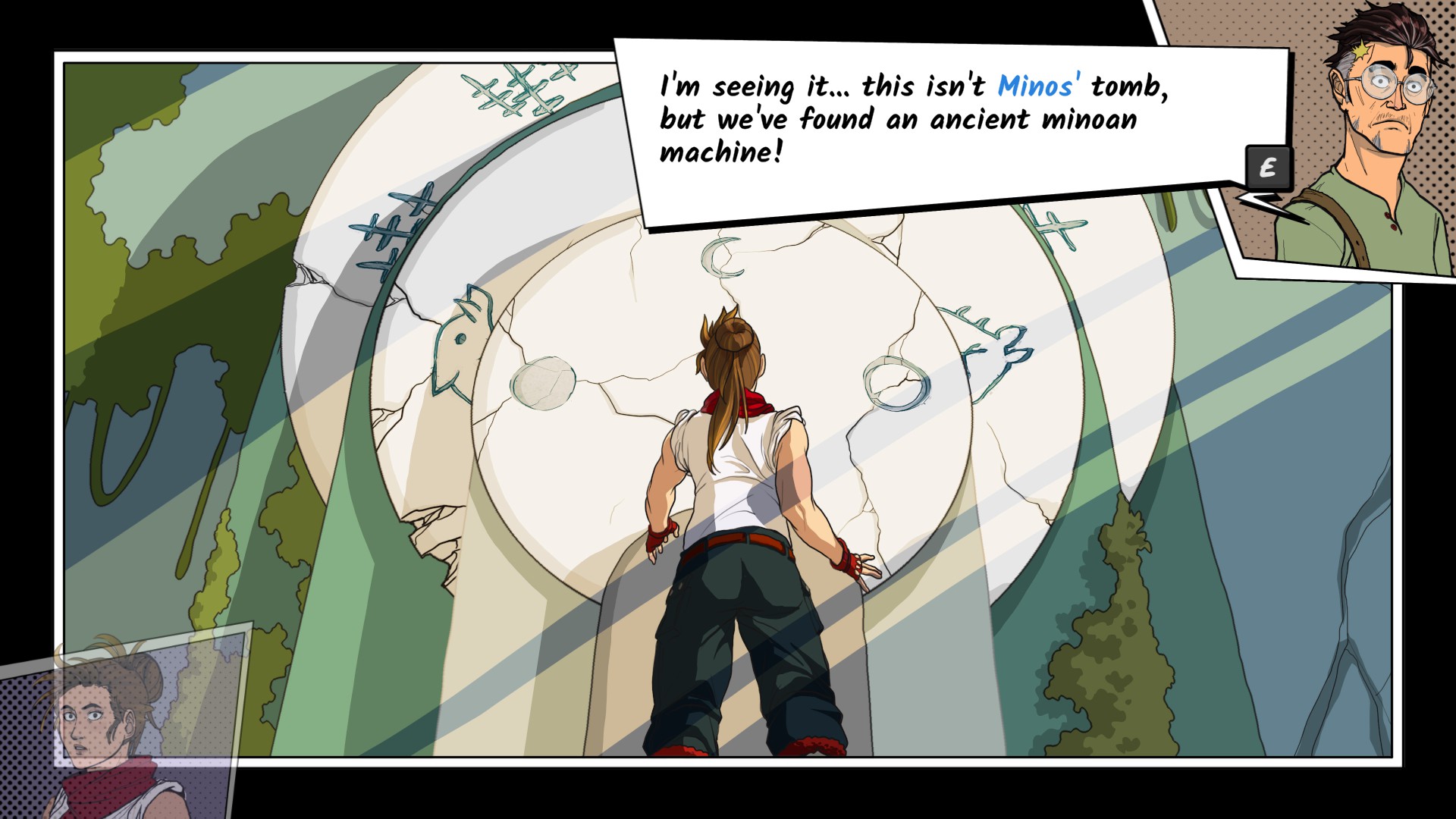 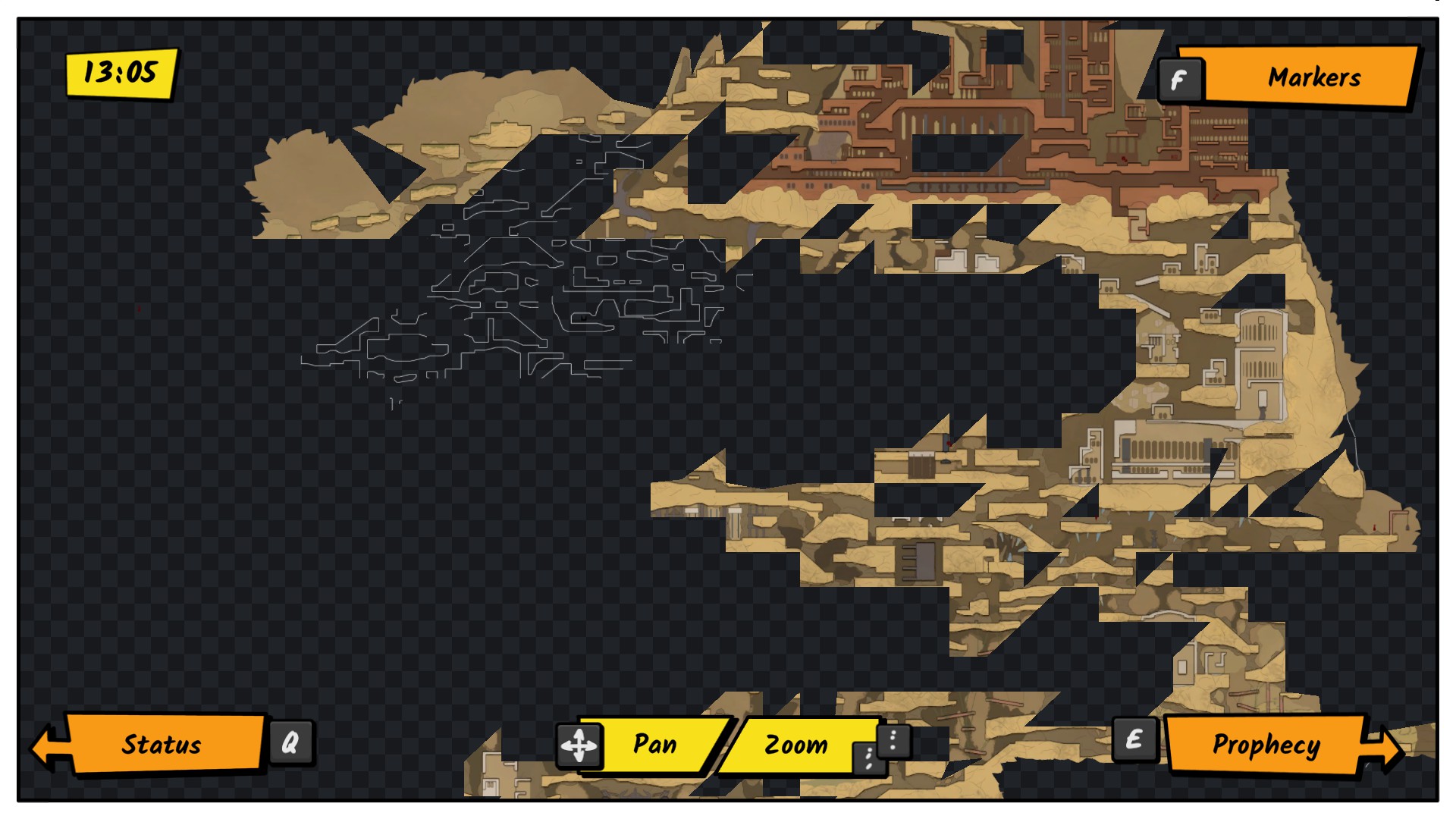 The first most striking aspect of Treasures of the Aegean has to be the visuals. Taking a note from European comic books (particularly the Franco Belgian aesthetic), it really looks like a comic in motion. Cutscenes are also presented in the same fashion, with still images and text boxes. It looks appealing, to say the least.

Next, the scope: Thera is a huge, ruin-laden obstacle course boasting a number of biomes; from run-down temples and hazard-littered forests to creepy catacombs and shipwrecks, all hiding secrets of their own. Marie runs, slides, jumps and vaults over obstacles with ease; it wouldn’t be an exaggeration to call this one of the best free-flowing games out right now. Speaking of which, the game is an adventure platformer with a heavy focus on exploration and puzzle-solving. It can be best described as Mirror’s Edge in 2D with a Tomb Raider-esque setting… All set within a Metroidvania-like world brimming with a rich past.

Interestingly, that’s also the most exciting part of this game: the history. Incorporating their own take of the pre-Greek civilization, there’s many instances of cool facts from a bygone era to be found here. This is especially reflected in the treasures you collect, from pendants and vases to relics like swords and coins. A journal and prophecy screen let you track all you’ve seen and done throughout your adventure. All serve to aid the lore, by offering historical facts to educate players; plus it also benefits the gameplay as the more treasure you collect, the more time you will get to explore. 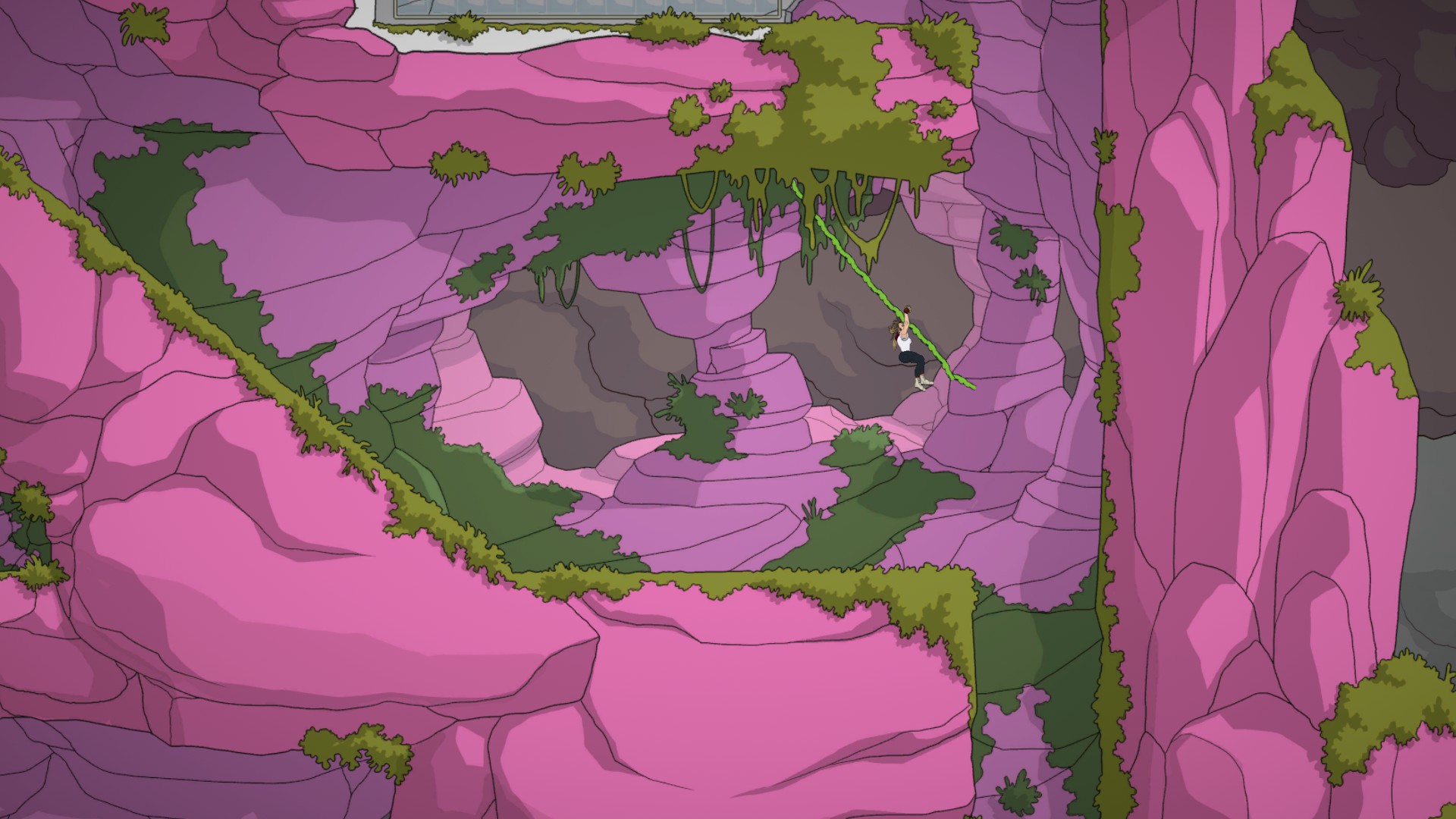 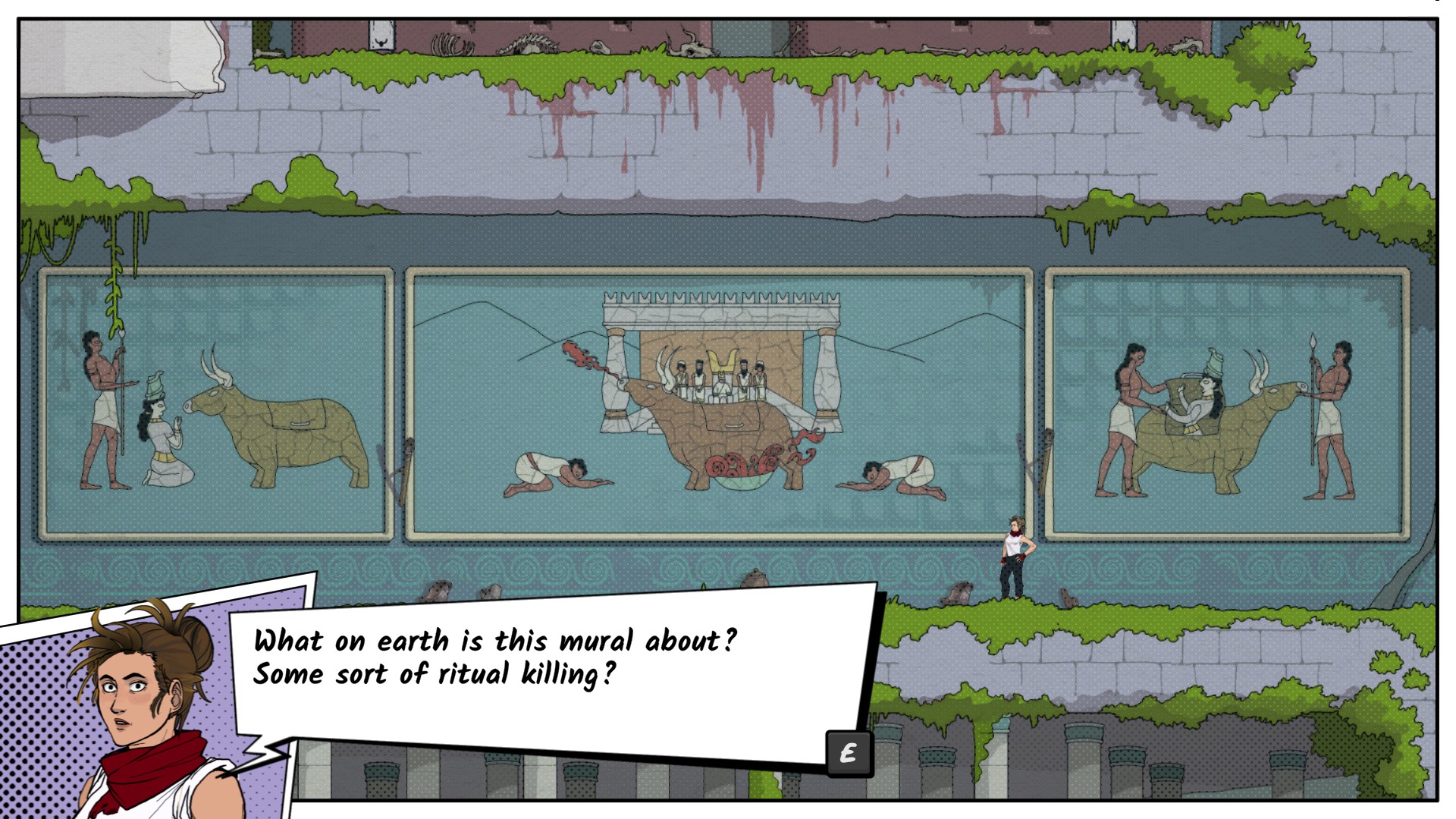 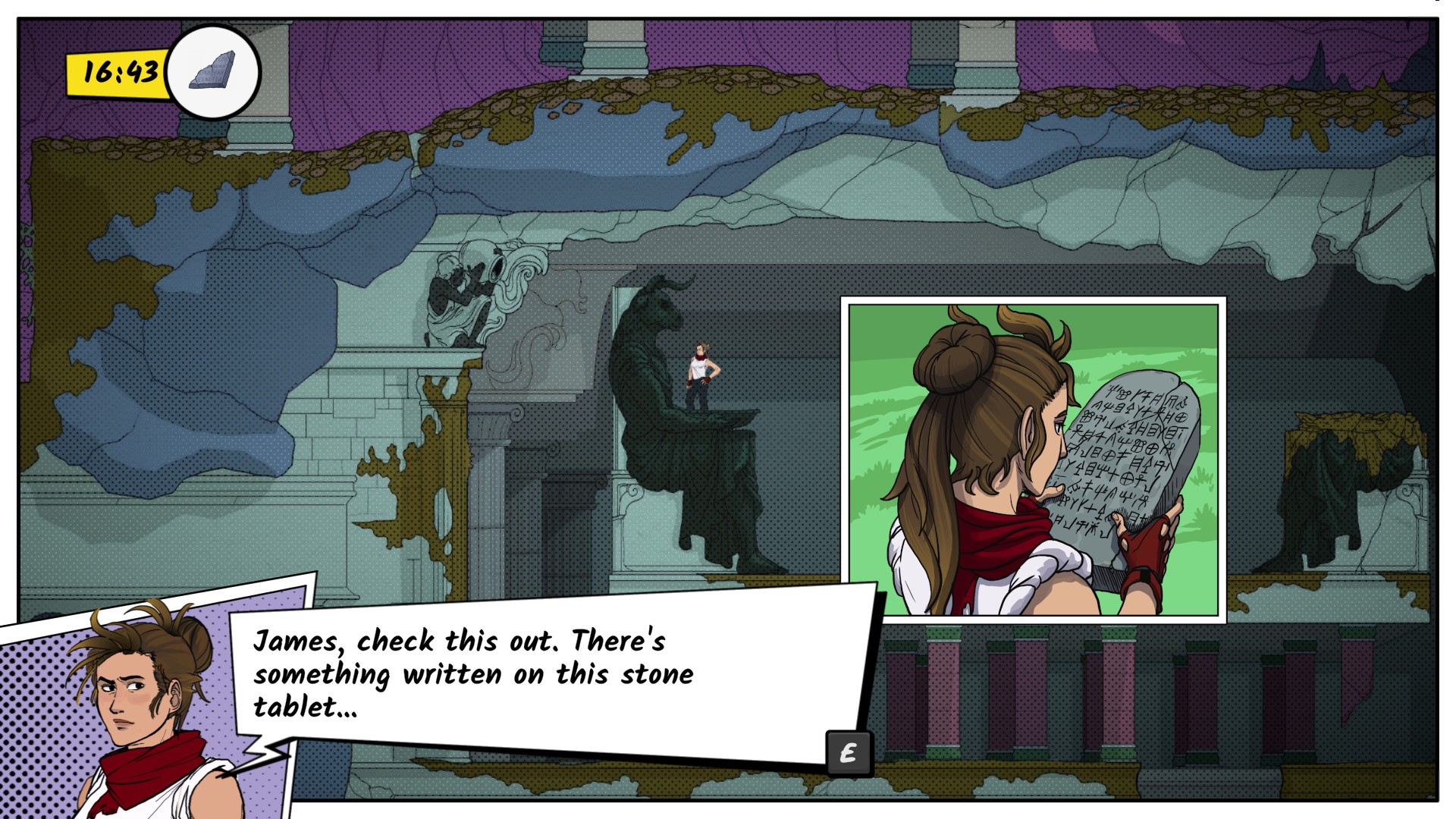 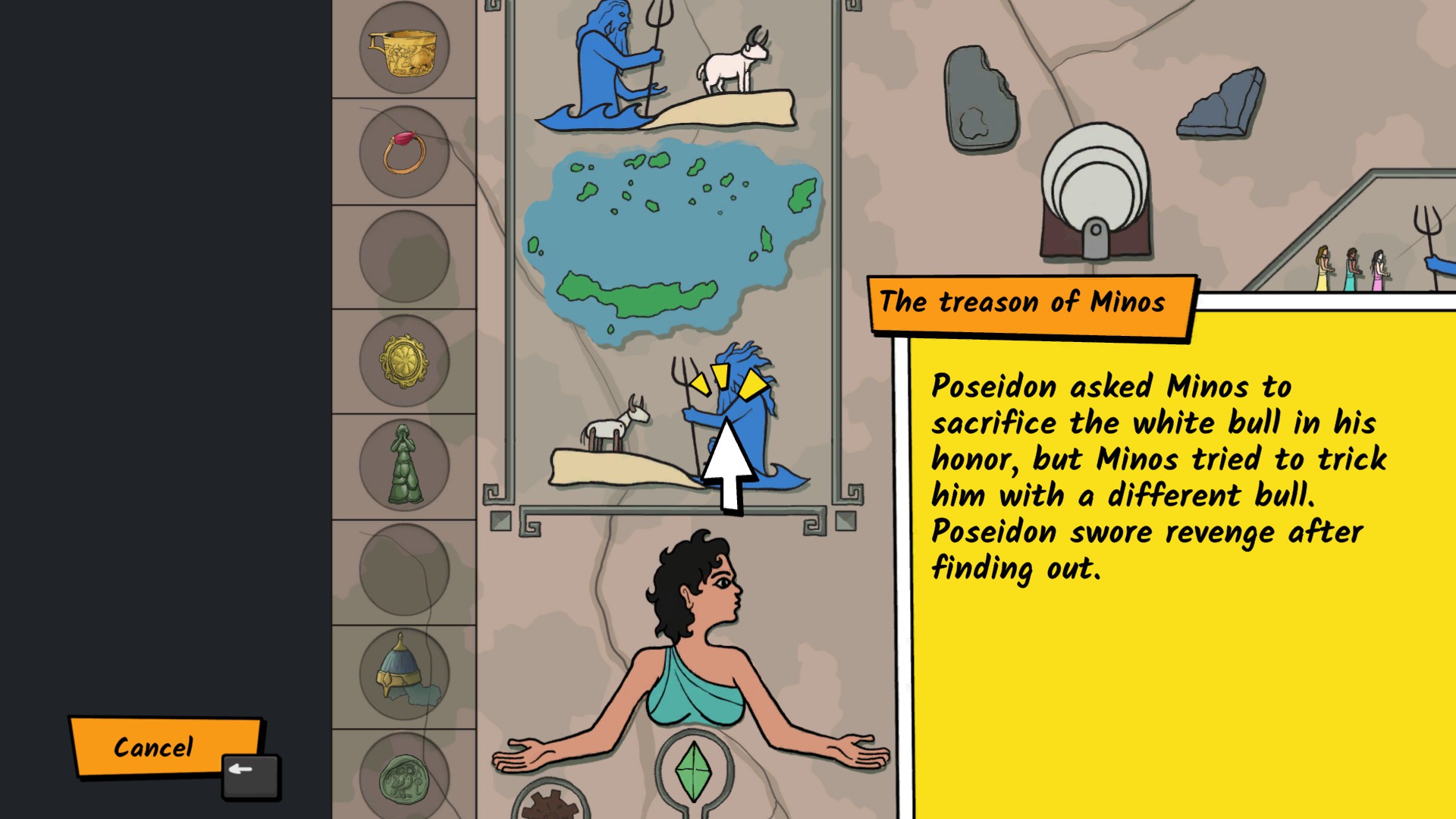 Oh yes, each “loop” (initially) occurs in 15 minute sessions during which players must traverse the environment to shed light on their predicament. Of course, since both Maria and the player will have limited knowledge about their circumstances, incrementally playing through several loops to come to grips with how the game’s mechanics work will be crucial – and of course to progress the plot.

Those of you who hate time limits in your games might turn your noses up at this one; but it’s very clear that Treasures of the Aegean is a game made with speedrunners in mind. The map is pretty big and players are not restricted in any manner from exploring it – as mentioned before, it’s their own lack of knowledge that gates progression. It also plays a big role in exploration as the game automatically charts visited locations as outlines on the map; but it is up to the player to fill in the context using the in-game markers to highlight points of interest that can be referred to on later runs. In fact, the devs have unveiled that it is very much possible to complete the game in one or two loops once you know exactly what needs to be done to unlock the finale.

Surprisingly though, I did not mind the time limit’s restrictions – it adds another layer of challenge to the lack of handholding. The puzzles are simple; it’s often either hitting levers based on clues, placing objects or pushing blocks; they’re all still well crafted. Some of the more advanced ones also involve quick movement and parkour. The stellar OST only elevates the experience. 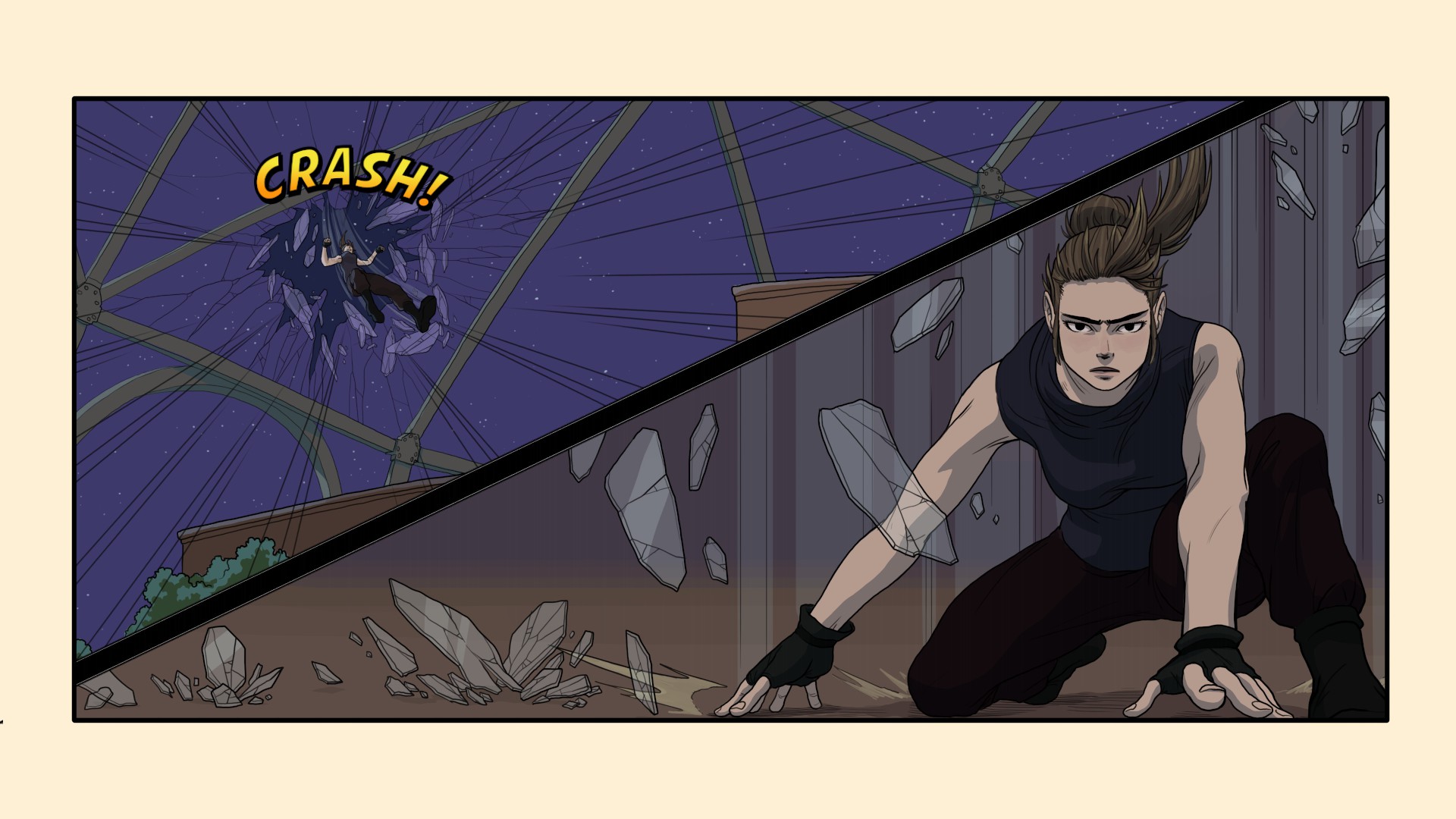 The overarching plot has some pretty dull writing and the characters aren’t memorable, including the villain. There’s more than a few grammatical mistakes in the dialogue too. The game also does not allow you to choose where you land at the start of each loop, it seems to be random.

There are no progression abilities or mechanics in this game – not in the traditional sense anyways. Which kind of feels like a missed opportunity to be honest; a boost to Marie’s parkour arsenal (like say, double jump or ledge grab) would’ve made it a smoother experience. And while the map is cool, it really is not helpful in the long run as it does not even highlight important areas (like major puzzle rooms).

There’s no combat from the player side, so the enemies end up being a nuisance than a challenge; the AI is pretty weird and their gun bullets travel in a weirdly slow fashion. Their patrol patterns can be an unpleasant hindrance too; eg. I had a guard stop right in front of a door I needed to enter to obtain an optional item. But he won’t budge, no matter what – and that wastes precious time. And note that taking damage (either via a fall or bullet) does not kill Marie… but it will shave off a whole minute off your timer.

Some mechanics like falling onto weak platforms to break through or the rope-swinging can be hit-or-miss. The game also does not make it clear at times as to what can or cannot be climbed on, largely due to some animation quirks. I also was not a fan of the flashback sequences which try to add some variety to the gameplay but end up feeling half baked.

Treasures of the Aegean is a clever and exciting adventure that’s fresher than the salt-scented seas of the Mediterranean. It might not be the brightest gem on display – but even with it’s dust-crusted stumbles, it’s a unique rarity that’s worth your time. Besides PC, the game is available on PlayStation (PS4, PS5), Xbox (One, Series X|S) and Switch for $20.

Ever since his first gaming experience with Wolfenstein 3D at 6 years old, Siddharth has fallen in love with games across many genres. He's especially fond of RPGs, puzzlers and platformers and you'll never see him NOT gush about his Top 3 favorite games: The World Ends With You, Borderlands 2 and Okami.
You might also like
Reviews
7.0

by Siddharth Patil on December 22, 2021
Often times, a game will come by that’s honestly nothing special – and that isn’t necessarily a bad thing, given it does something new, or at least different. Publisher Thunderful Games’ The Gunk is just that. It’s also [...]

by FreeckyCake on October 2, 2020
Since its appearance on the original PlayStation in 1998, The Simple Series was nothing but a line of budget-priced video games published by D3 Publisher and developed by several developers such as Taito, Irem, Success and Sandbot. For the most part [...]
Latest Reviews
The Gunk (PC) Review – A Suck-cessful Expedition
7.0
50
Treasures of the Aegean (PC) Review – Blast From The Past
7.5
8.6
Ori & The Will Of The Wisps: Review- Hearts On Fire
9.0
8.7
Latest News