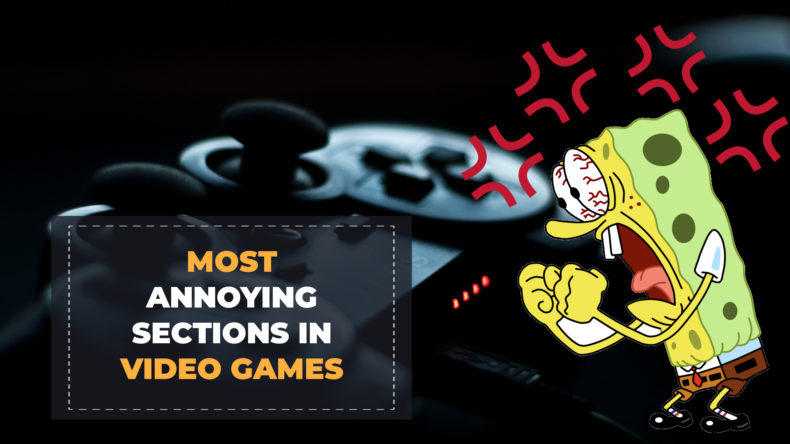 We’ve been playing games for as long as we’ve been alive, and now that we’re much older, it’s unlikely we’ll ever quit. It’s a habit that has stuck with us, despite increasing age and  various pressures. We have some of our fondest memories attached to the medium, as we have to others (like books or movies) and it’ll always be a part of our lives.

With that said, games tend to really piss us off from time and time. Occasionally we’ll come across some design decision/ level/ section or the other that genuinely makes playing the game feel like a ‘waste of time’ as most people often claim. Usually games inspire us creatively, but occasionally they make us completely scratch our heads in a state of baffled confusion. Look, making games is hard. It’s  an incredibly complicated endeavor that requires juggling a lot of balls in the air. Eventually, of course a few are dropped here and there.

We don’t mean to criticize the designers or anything, all we want is a written explanation on what they were thinking. Without further ado, here are the gaming moments that made us lose faith (temporarily):

10. Forsaken Fortress- Legend of Zelda: Wind Waker: Most people would probably put ‘Water Temple’ from Ocarina of Time as the worst 3D Zelda has to offer, but in my opinion the bland, horrible opening to the otherwise impeccable Wind Waker smacks of some of the worst design decisions in modern gaming history. After the fun intro, you’re dropped into a boring-looking castle dungeon and are made to play through a contrived, forced stealth section that has no bearing on the rest of the game (or a proper feedback system to be honest). It’s horribly designed, confusing ,padded and almost ensures that a certain amount of impatient,young gamers would just throw their hands and give up on the game even before it has a chance to properly begin, instead of the Triforce Quest where they’re actually supposed to (I kid, I kid).

9. Sen’s Fortress- Dark Souls: To be clear, this isn’t bad level design. It’s great level design. Sen’s fortress comes right at the time when the player is feeling ultra-confident about his/her skills and finally seems to be getting a grasp on the game. Having rung both bells, and finally unlocking that mysterious looking gate, you finally you’re gaining control of things. Unluckily for you, FROMSOFT puts one of the biggest difficulty spikes in recent gaming history. First, you’ll be instantly be humbled by those green lizard swordsmen, then you’ll be forced through suffer through the entire devious, trap-filled dungeon with nary a bonfire in between, forcing you to restart outside each time you die, and too bad for you, death comes in seconds here. Eventually reaching the bonfire outside feels like a huge sigh of relief, making the player feel like he/she has survived an incredible ordeal( He/She has not. Anor Londo is about to suck their souls just up ahead). We get that communicating this feeling is kind of the point, but can’t help but feel FROMSOFT need to occasionally put less sugar in their coffee.

8. Deus Ex- Naval Shipyards: Deus Ex is known for its’ sprawling, globetrotting scope and making the plater infiltrate various military bases, corporations and secret organizations around the world. Sometimes though, it can be too much.This particular level is set right after JC finally returns to NYC (after his awesome Hong Kong Sojourn) Whilst important in terms of story and fairly large in scope, it is an absolute slog with objectives that aren’t really fun to complete, enemies that aren’t fun to fight, a very confusing level layout and no major dramatic plot twists. Sure after beating the level, you move to Paris and it’s all awesome again, but everytime we re-play Deus Ex, this section seems to grow longer and longer. It feels disconnected from the tight pacing of the rest of the game. The ‘Missing Link’ DLC in Human Revolution reminds us of this level, and we don’t mean that as a compliment.

7. Persona 5- Shido’s Palace: I don’t hate it as much as a lot of the fanbase, but it no doubt is a needlessly convoluted mission that makes Atlus’ otherwise amazing RPG a bit of a slog towards the end. Whilst the story payoffs are exceptional, going through an overtly confusing maze, solving overtly confusing puzzles, whilst being periodically forced to be turned into rats and being awkwardly forced into fights with tough enemies (aka instant game over) is not. Both Persona 3 and 4 boasted incredibly strong and imaginative final sections. 5 on the other hand, takes its cues from Nocturne and Digital Devil Saga (on the SMT spectrum) on making the final (or semi-final) sections an absolute chore.

6. Seymour Flux- Final Fantasy X: Let’s be honest, I dislike Final Fantasy X pretty much from start to finish. It’s hard to stomach the linear structure, the absolutely awful protagonist, the confusing lore and so much of the forced grinding with absurdly high encounter rates that the game forces upon on you. To top all that, you have the misfortune of fighting this Bastard. Not only is the fight absurdly cheap and confusing (with awful OHKO attacks), you’ll probably be all but under-levelled, and force yourself to grind at the nearest save spot to strengthen up a bit. Also, lest not forget taht grinding is a total chore here, thanks to the annoying enemies. As if all this wasn’t bad enough already, it’s important to remember that FF X has unskippable cutscenes (in case you forgot), making you watch the same boring cinematic over and over again, each time you take him on. All these things combined make for a dispiriting, head-scratching moment in time where you wonder why it is you’re playing the game anyway.

5. Fighting Rugal Bernstein- King of Fighters ’94/’95 :  Me and my first cousin used to be huge fighting games enthusiasts back in the day. So of course, we cut our teeth on all the games of the SNK golden era, by which I mean the nigh-unbeatable, rubberband bosses from Geese Howard onward to whatever Animu monstrosity the early 2000’s KOF threw at us. None however, gave us as much of a culture shock as facing the final boss of the first two King of Fighters games. Memories are fresh in our minds from slowly but surely perfecting our way through all the challenging fights, only to run into this autocratic, elitist asshole destroying us over and over again. All the while being incredibly smug whilst doing so. It was frustrating to say the least.

4. Ghost Fish in Ninja Gaiden/ Black/Sigma: There are two things that are well accepted: 1)  2004’s Ninja Gaiden reboot is a masterpiece and 2) Series director Tomunobu Itagaki is a man consumed by his vices, i.e drinking and gambling. Here, he appears to have succumbed to them a bit too much. By adding incredibly annoying, vicious , ‘ghost fish’ that home in on Ryu when least expected, and almost always end up biting off huge chunks of his health, till the ‘Game Over’ screen begins to flash. They are especially annoying in the penultimate ‘Boss Rush’ chapter where they just seem to make things a giant slog. I understand the game’s need to ‘throw everything at you’ before the final boss, but I still wish Team Ninja would have reined it down a bit.

3. Everything after ‘The Big Twist’ in Bioshock: Bioshock is a great game that expertly builds its world and narrative through various gameplay and storytelling devices. It’s thematically deep and has the courage of its convictions, all of which it masterfully builds to its stunning central revelation. Problem is, it runs out of tricks immediately after and absolutely limps towards its conclusion. Abandoning the whole moralistic complexity all of a sudden, with a comically idiotic ‘boss fight’, boring forced combat sections, and two equally terrible simplistic endings, it ends up leaving a bitter taste in your mouth. It’s still a great game, and we’ll always remember Rapture, even though it pulls its punches at the final moments. So unlike Andrew Ryan.

2. Artifact Hunt- Metroid Prime 2 : The ‘Artifact Hunt’ was the only major maligned portion of the original Metroid Prime, but it was forgivable considering the clues were lenient, the world was easier to navigate and you could even do them ahead of schedule (in subsequent playthroughs, when you know where they were hidden). It wasn’t too big of a pain in the ass. PRIME 2 however, is another story. You can’t do most  of them out of sequence,due to the need for Samus’ light suit, and there are no simple clues given like in PRIME You have to cross reference the lore to figure out locations. Not worse enough yet? Check this: You have to scan then in the environment using Samus Dark Visor, making an infinitely annoying section, even more annoying. PRIME 2 is a great game that expertly amps up a lot of the elements of PRIME 1, but not always for the better. This section being the chief example. Seriously, WTF Retro?

1. Flying Missions- Ps2 era GTA’s: People usually have polarizing opinions on GTA game, but there’ no doubt that everyone hates the infamous ‘flying missions’ that are shoehorned into the storyline. There’s good reason for that, as Rockstar still hasn’t figured out how to properly implement it. While in itself is an enjoyable, polished activity, the way it’s integrated within missions is forced, haphazard and almost always a pain in the ass. The need to do everything precisely (from take-off to land) doesn’t really endear it to gamers, and usually there is a time-limit involved which makes things ever worse. GTA 5 had checkpoints to mitigate the pain, but gamers all over still have PTSD flashbacks over ‘Demolition Man’ and ‘Supply Lines’ from Vice City and San Andreas, and those are for good reason.

What are the moments that most annoy you in games? Sound off in the comments below