by Siddharth Patil on December 22, 2021
50
0
previous article
Treasures of the Aegean (PC) Review - Blast From The Past
next article

The Gunk stars Rani, part of our duo of gritty space haulers, struggling to make a buck as they chance upon an untouched planet brimming with life. They came in search of valuable resources, and it looks like they’ve hit the jackpot…

As they uncover the dormant secrets of a shattered civilization, they must battle the curse of a toxic gunk parasite, all while getting caught in a spiral of festering mistrust.

Use your trusty Power Glove to reverse the corruption, uncover secrets of old and heal the planet! Experience the evolving relationship of the crew, as you explore this unique planet. Use your ingenuity as well as your quick reactions to overcome the challenges that await. What stories lay hidden in this mysterious abandoned world?

What does it all mean? What role can Rani play in the fate of this evocative, moody planet? Sometimes you just have to take a leap of faith. Uncover the mystery. Cleanse the Gunk. Save the planet.

> Engaging Exploration: Discover a lush jungle planet with damp caves, venture into the unknown and explore a bygone society.

> Corruption & Regrowth: Eradicate the gunk, restore nature, and transform the world around you. Employ the revived plant life to delve deeper into this strange and wondrous ecosystem.

> Intimate Narrative: The narrative is intrinsically linked with the exploration, where our two main characters keep in tight radio contact throughout the game. Fiona Nova lends her voice in a stellar performance as main character Rani.

> Music & Atmosphere: The Gunk invites you to take the time and listen to its soothing tunes. An explorative atmosphere conveyed through an evocative art style. Kick your feet back and enjoy an adventure like no other!

- Combat is uninteresting and the overall gameplay loop is a tad shallow.
- Most upgrades barely make a difference to gameplay.
- Odd narrative pacing.
- Lack of extensive graphics tinkering options.

The Gunk perfectly captures the sense of awe when faced with the unknown - and that is its biggest strength. For all it's faults, this is still a quality showcase from the developer and I can't wait to se what they do further with this new IP.

7.0
Total Score
—
User Score
You have rated this
Full Review

Often times, a game will come by that’s honestly nothing special – and that isn’t necessarily a bad thing, given it does something new, or at least different. Publisher Thunderful Games’ The Gunk is just that. It’s also Swedish developer Image & Form Games’ debut foray into 3D games; it might not blow you away, but it’s a step in the right direction. 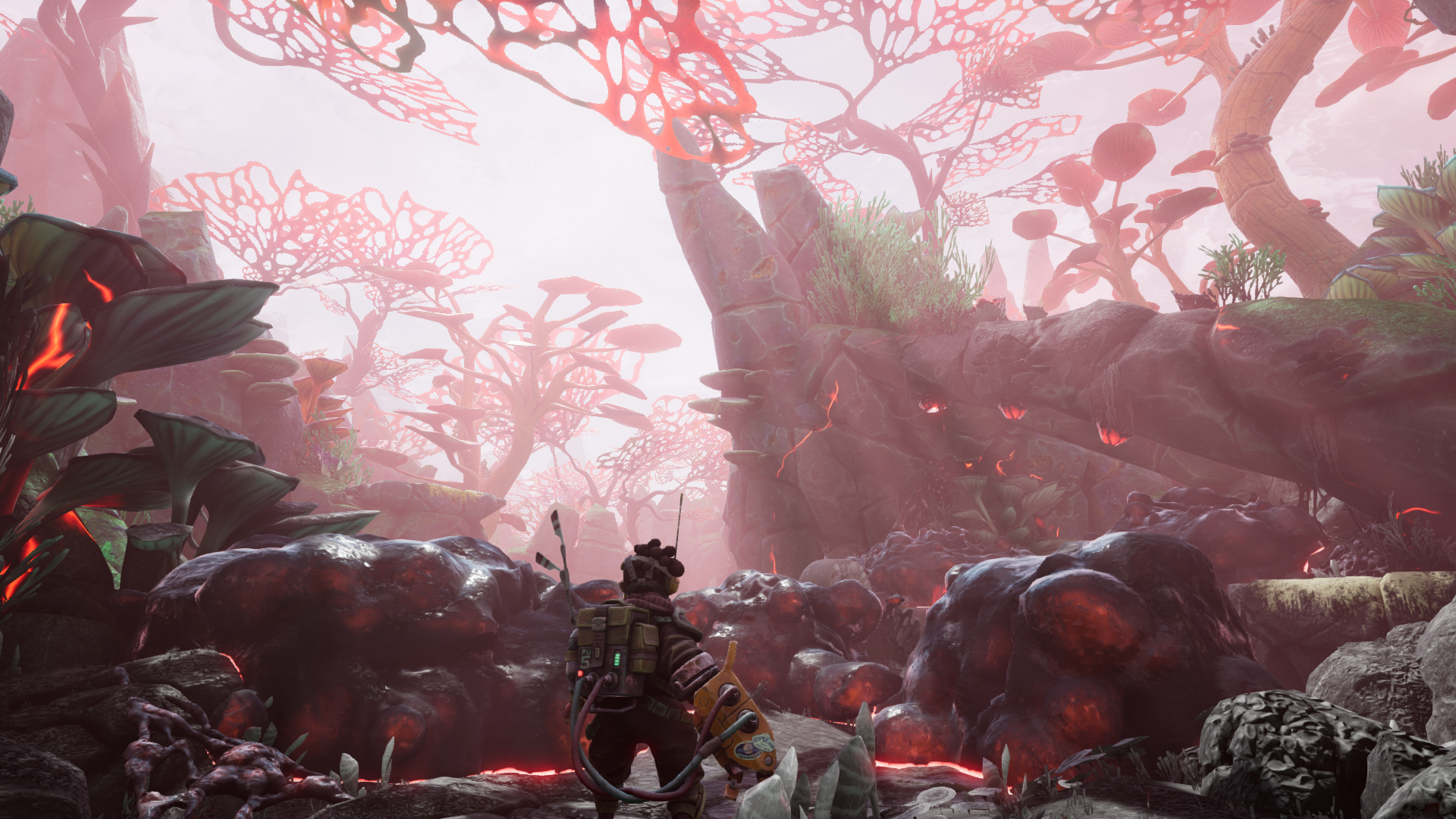 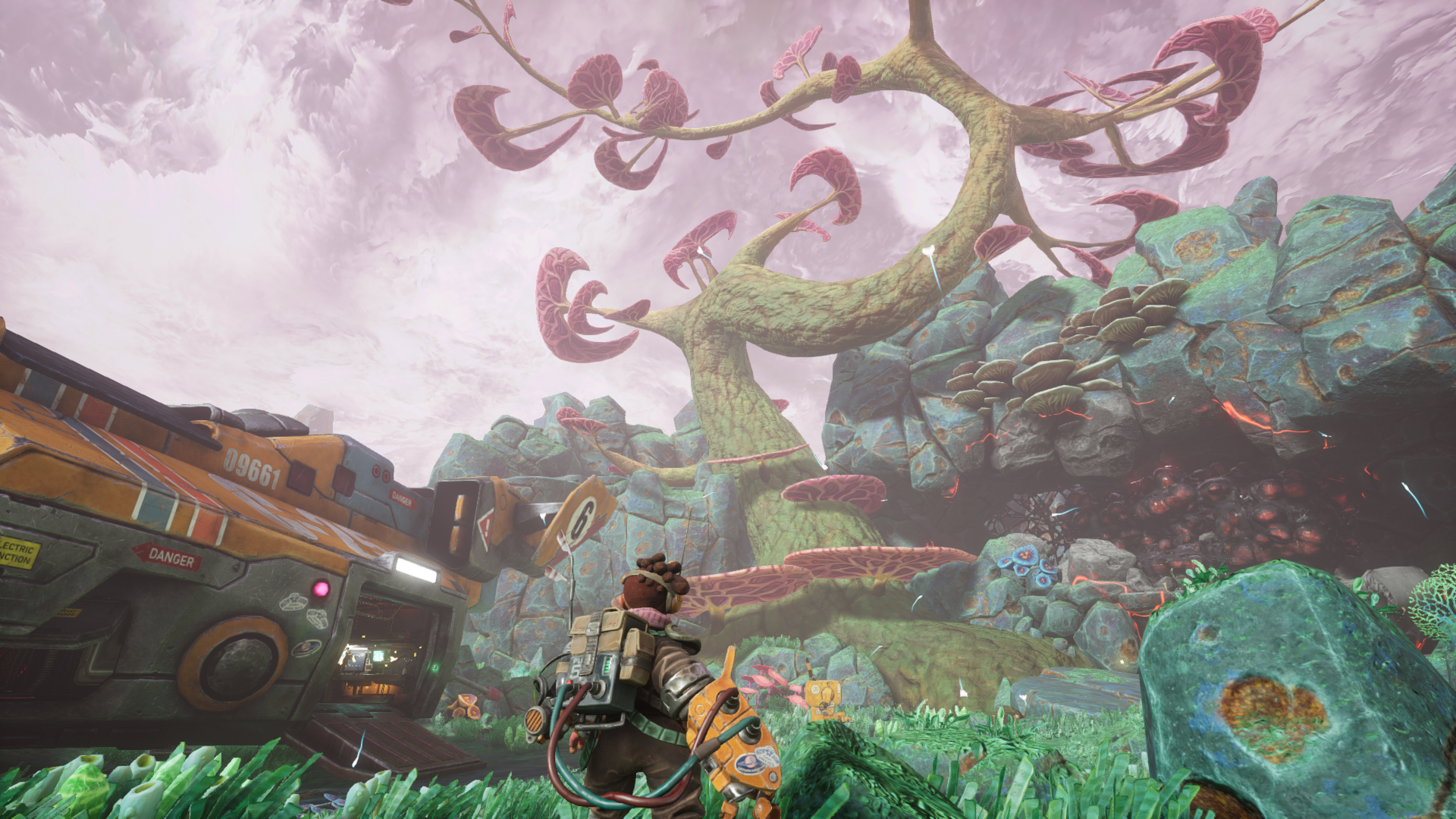 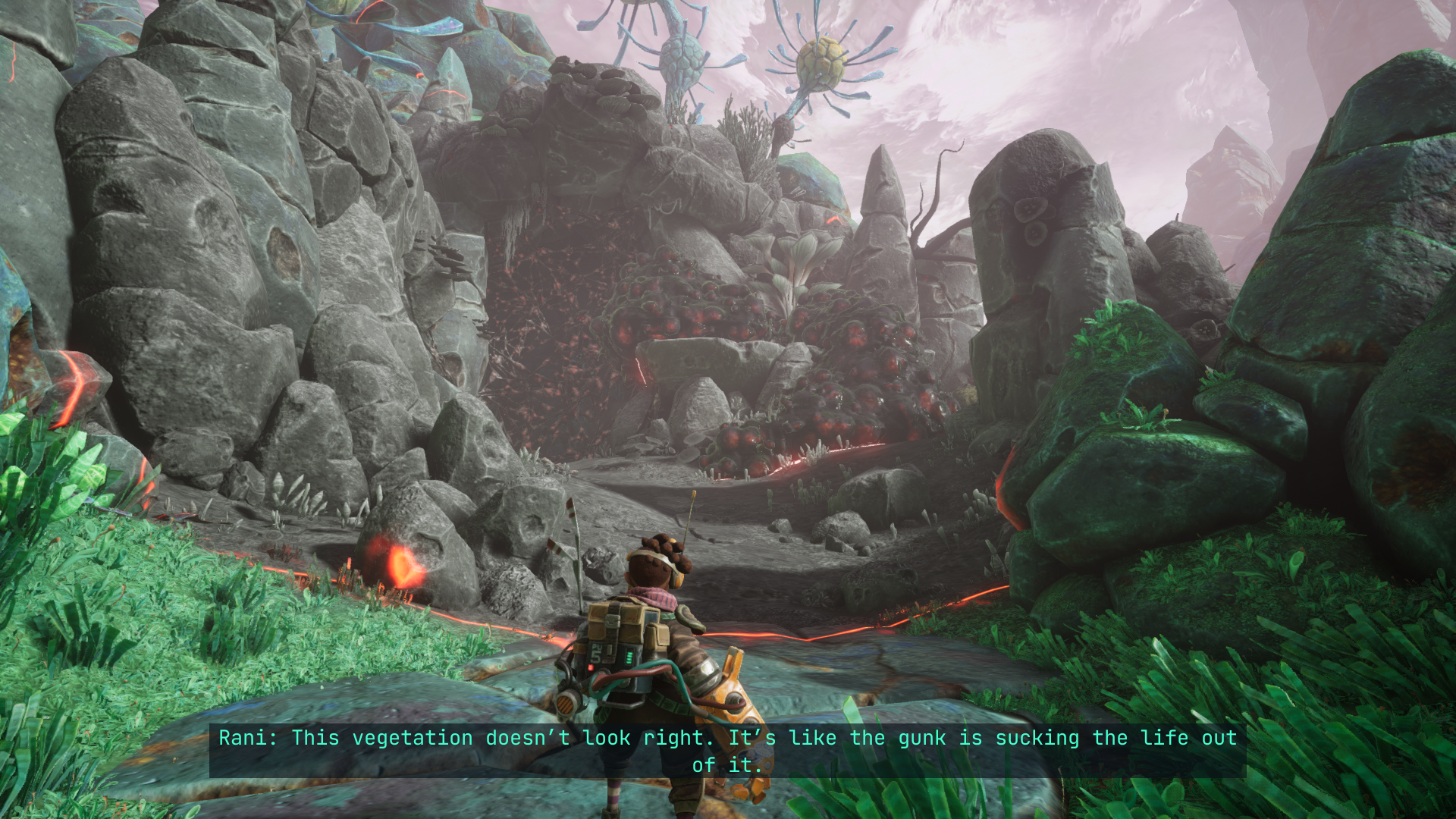 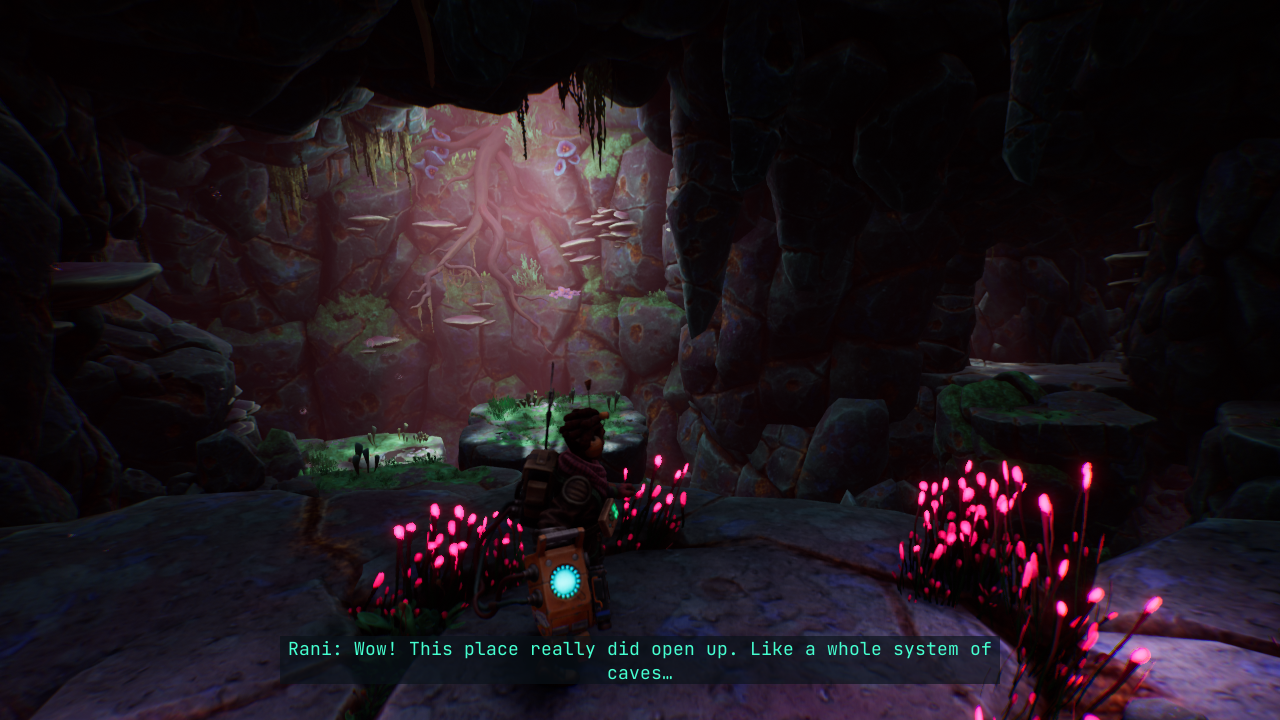 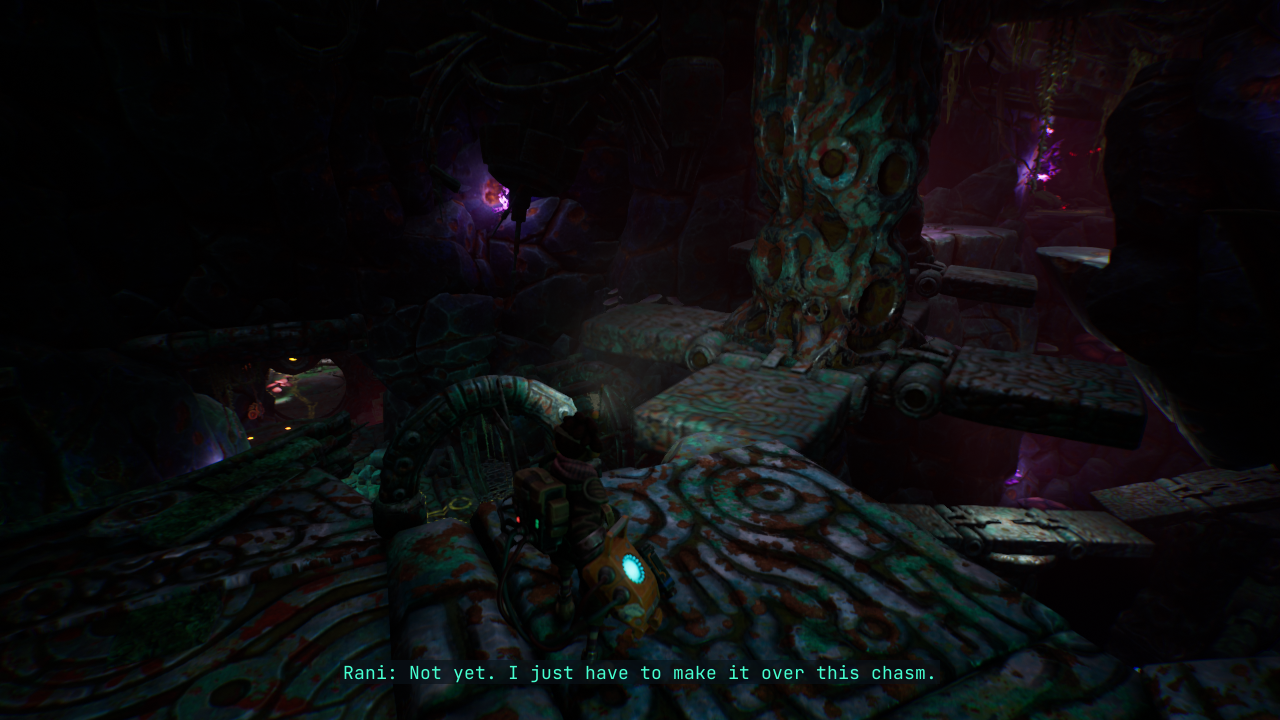 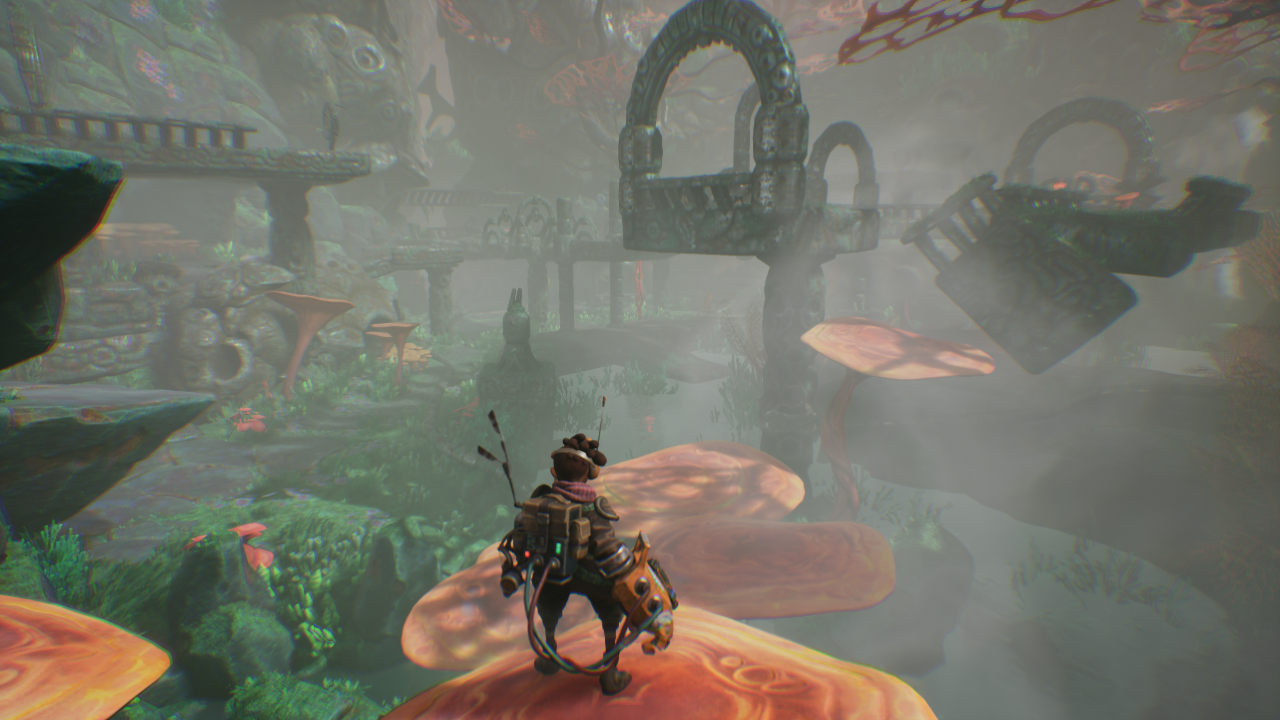 For starters, it’s a wonderful looking game. The vibrant color palette pops and the celshaded artstyle is beautiful – The Gunk offers some genuinely screenshot worthy moments. What’s less than stellar though, is the lacklustre settings screen – there’s only presets. Dislike motion blur? Tough luck, you’re stuck with it.

Now, the narrative is definitely the next most appealing thing about this game after the visuals. Control Rani, who lands on an unknown planet with her partner Beck on their spaceship nicknamed Bunny; being the scavengers they are, the duo plan to explore this alien wilderness for resources. Yet what seems like a thrilling adventure turns into mystery; they come across clusters of parasitic goop that is suppressing the wildlife. Adamant on unearthing the root of this anomaly, Rani sets out to fix things armed with her power glove called Pumpkin… and soon, the duo discover that there’s more to the planet than meets the eye.

It’s a wholesome plot about trust and friendship, plus the environment-friendly message is a nice cherry on top. The cinematics are mostly well done (save for the occasional janky animation) and the voice acting is good. The soundtrack is solid too and pairs well with the visuals. 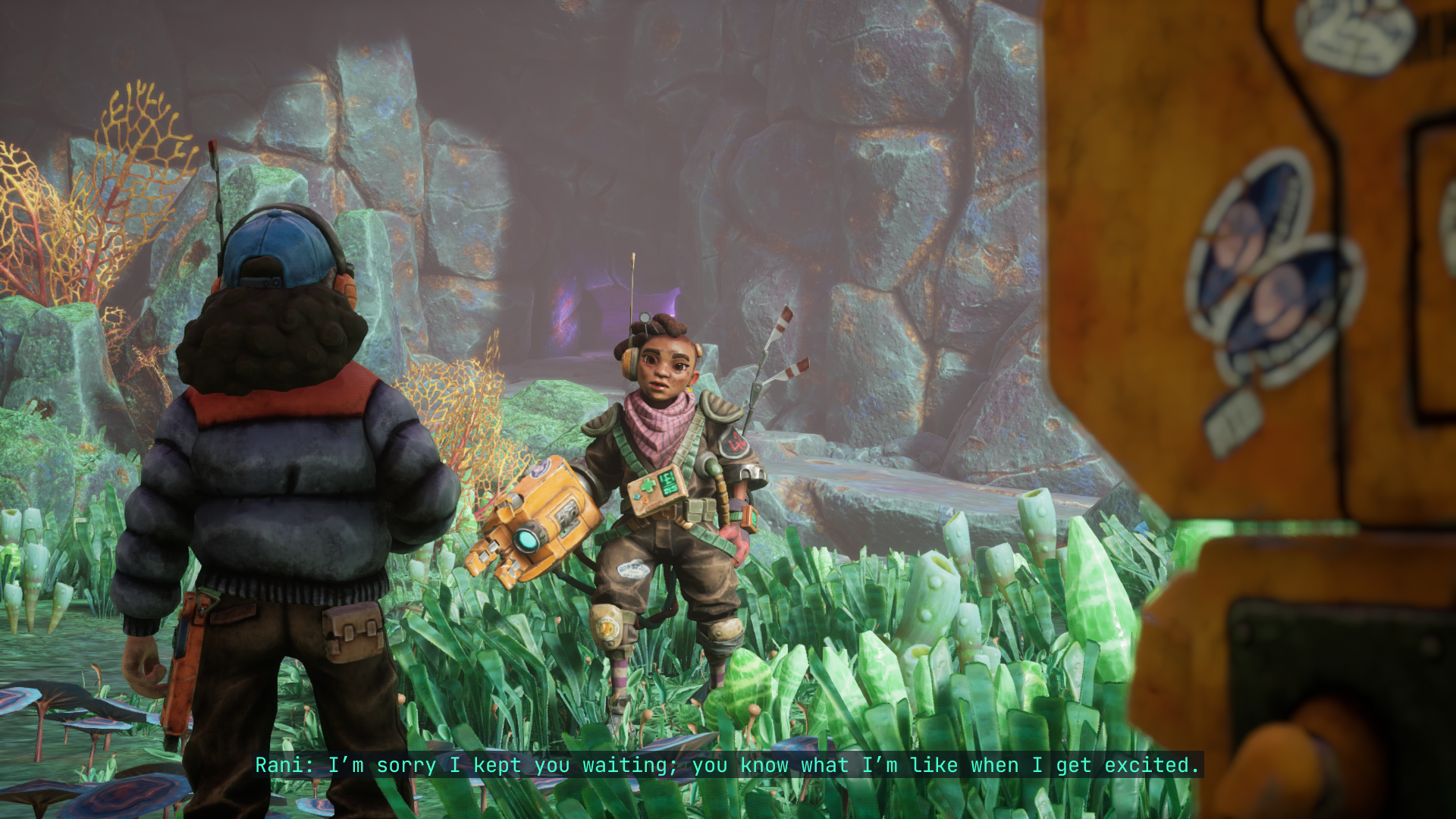 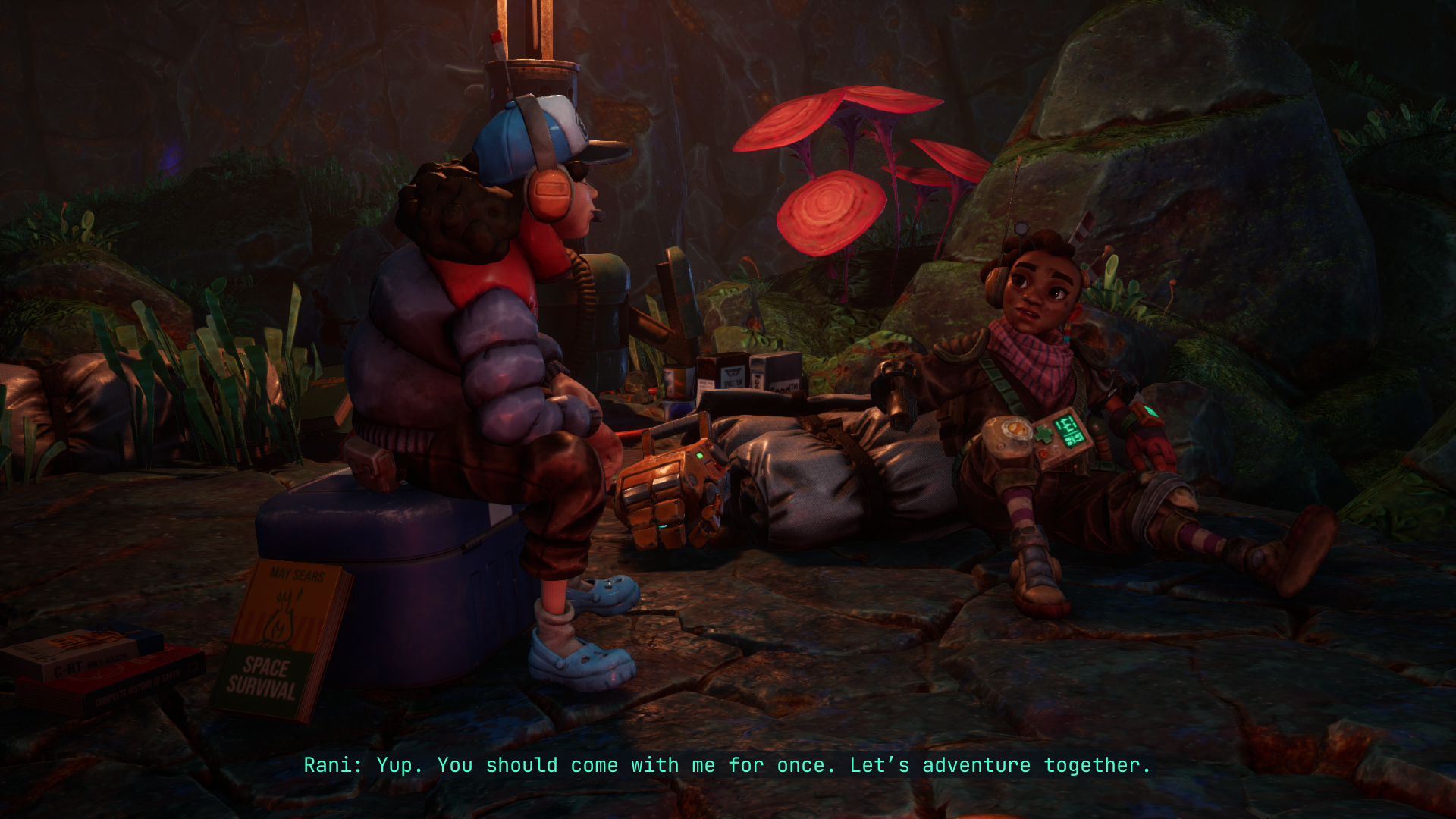 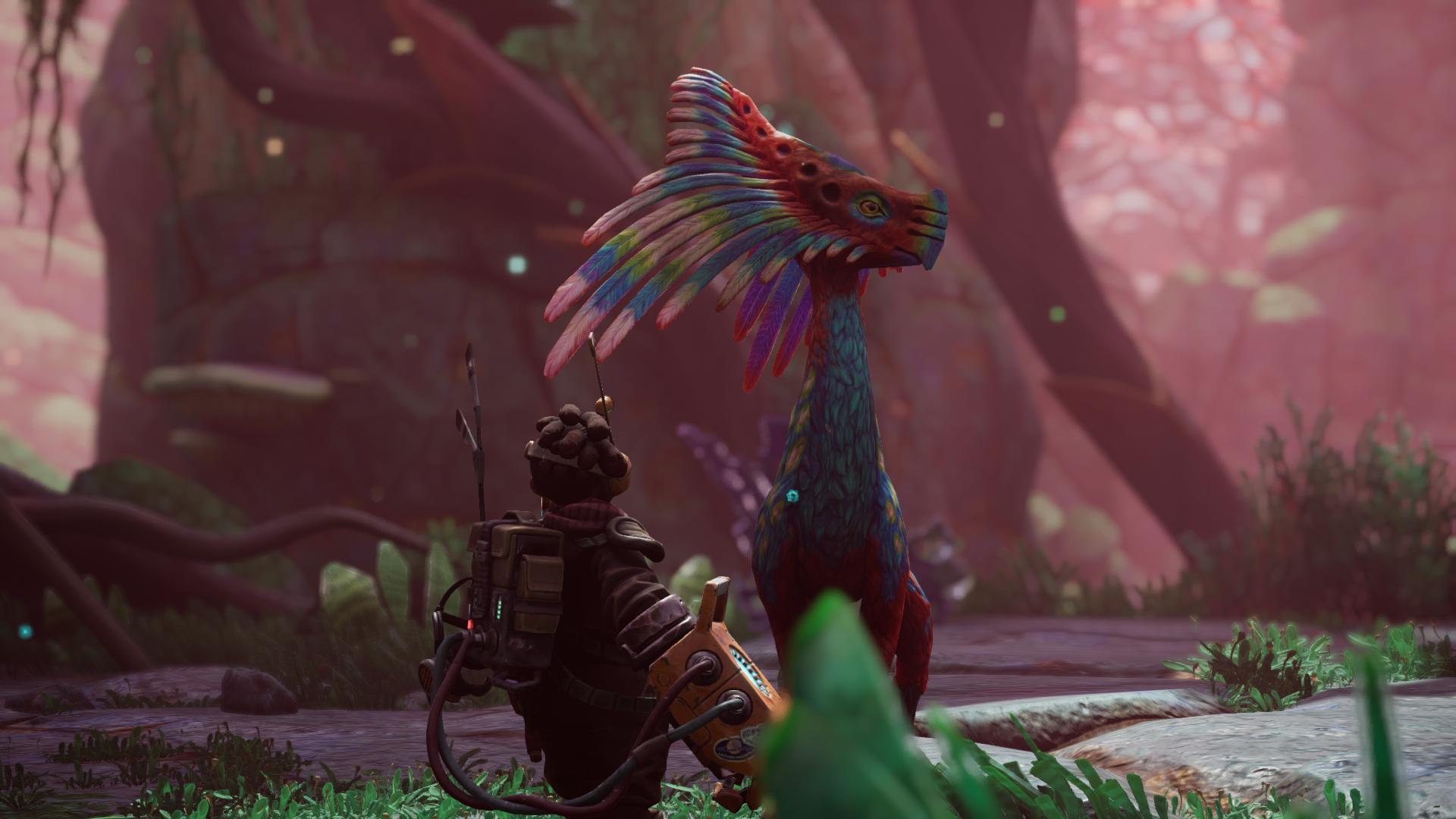 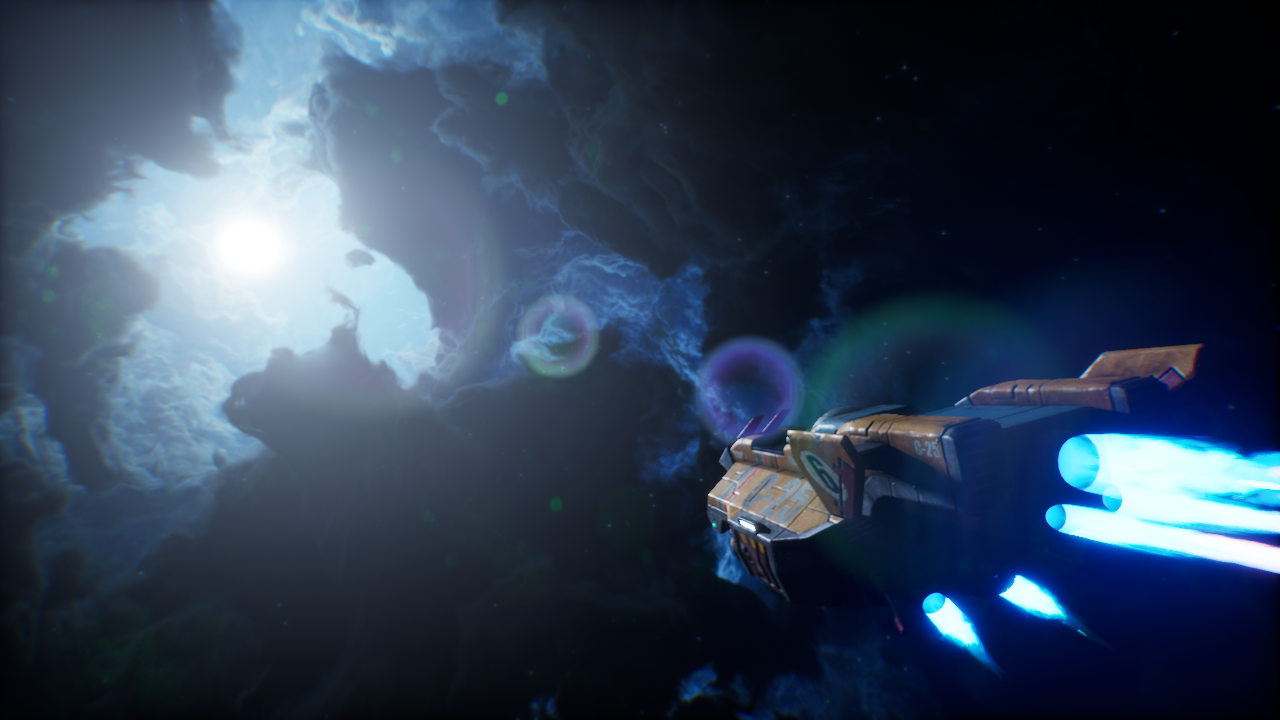 The game is essentially an action-adventure game. Rani traverses a variety of levels – from rocky caverns to lush forests and forgotten ruins – all connected in a linear fashion. The planet is teeming with mostly fungi lifeforms, which don’t just make for visually pleasing backgrounds but also help with platforming. On that note, Rani can jump, climb, run (with an upgrade) and grab onto Tomb Raider 2013-esque marked ledges. Speaking of upgrades, that’s what drives forth the mechanical progression of The Gunk; new upgrades are unveiled in her database as Rani scans her surroundings (ala Metroid Prime) and she must spend resources earned while out exploring to unlock them. These range from tame, like a more powerful suction, to neater options such as a decoy to distract enemies. And yep there are light combat sections which I will touch on later.

Rani’s power glove also plays a big role throughout her journey. From sucking in resources (and the Gunk) littered around the levels and scanning them, to interacting with the environment and shooting plasma shots… little Pumpkin does it all. The resources are split into several categories: Organic, Fiber, Metal and Alien. The former two are obtained from flora, metal from ores and alien from, well aliens. You’ll mostly be platforming from point A to B, collecting the shiny stuff in between, solving puzzles to progress… and ultimately clear areas of the goop, causing the flora and color to spring back to life.

Rani can also place beacons at specific spots in each area to allow her to take a break from her excursions. Heading back to camp lets her unlock new abilities at the computer and also engage in idle chatter with NPCs (yes, besides Becks). It lends a bit of immersion to the otherwise static world.

For all it gets right, it’s hard to look over the weakest aspect of the game: the combat. Gunk infested areas will often spawn small alien critters which, while annoying in numbers, are fairly easy to deal with. Then there’s the immobile stalks that chuck projectiles at Rani – tedious, especially in areas without much cover. The decoy is useful in these situations, so its an upgrade I recommend unlocking ASAP.

Overall, the combat ends up being more of an inconvenience than something engaging, and the small enemy variety gets stale quick. But even besides that, the overall gameplay loop – mostly consisting of hitting levers, destroying debris or growing mushrooms for platforming to progress – doesn’t have enough depth to really shine beyond being passable; it plays its cards too safe for that. Platforming is alright, but doesn’t really feel tight. Then again, there’s no penalty for dying either so that lessens the frustration. The worst offender for me though is the slow pacing at times and just general handling of a certain “plot armor” segment in the later half that makes no logical sense – but oh well.

When it comes right down to it though, The Gunk perfectly captures the sense of awe when faced with the unknown – and that is its biggest strength. In conclusion, the rest of the experience is engaging enough to make me sit through the short 5-ish hour story. For all it’s faults, this is still a quality showcase from the developer and I can’t wait to se what they do further with this new IP.

The game is available on PC, Xbox One and Xbox Series consoles (via the Xbox store), including Xbox Game Pass. Buy it if you’re itching for a chill game to breeze through on a lazy weekend and want something quirky.

Ever since his first gaming experience with Wolfenstein 3D at 6 years old, Siddharth has fallen in love with games across many genres. He's especially fond of RPGs, puzzlers and platformers and you'll never see him NOT gush about his Top 3 favorite games: The World Ends With You, Borderlands 2 and Okami.
You might also like
Reviews
7.5

by FreeckyCake on October 2, 2020
Since its appearance on the original PlayStation in 1998, The Simple Series was nothing but a line of budget-priced video games published by D3 Publisher and developed by several developers such as Taito, Irem, Success and Sandbot. For the most part [...]
Latest Reviews
The Gunk (PC) Review – A Suck-cessful Expedition
7.0
50
Treasures of the Aegean (PC) Review – Blast From The Past
7.5
8.6
Ori & The Will Of The Wisps: Review- Hearts On Fire
9.0
8.7
Latest News