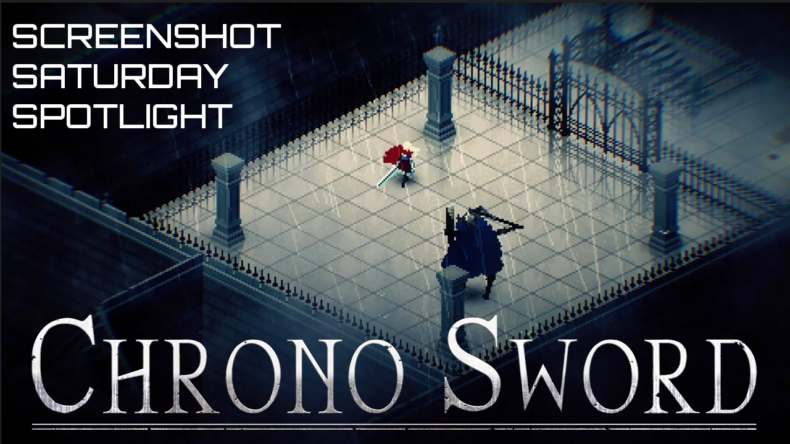 Our love for indie games has constantly driven us to look for hidden gems that might go under everyone’s radar. Through our new series, Screenshot Saturday Spotlight, we plan to channel our energies to bring to you any upcoming game that you will likely not hear about.

To this day, many people (we included) remember Eitr; the gorgeous pixel art Soulslike game that was shown off at 2015’s E3 and then vanished into thin air practically. We actually happened to run into Chrono Sword while we were looking for Eitr and investigating its disappearance from the Steam store.

So what is Chrono Sword?

Chrono Sword is an isometric Soulslike with a time travel twist being developed by 21c Ducks. The story will follow Aenor who loses her memories and has to juggle between two timelines to save the world. As is staple with Soulslike games, there will be bonfires, boss battles, a harrowing atmosphere, and an orchestral soundtrack. Emi Evans of Nier Automata fame has been onboarded and will be lending her talent to the title track. This gives us a small reflection of how passionate and serious the developers are about delivering a high-quality product.

As for why we are excited for the game, the answer is pretty simple – it looks gorgeous and is a Soulslike. That pretty much qualifies for hype in our books despite naysayers who might groan “Another Soulslike!?!?!”. It might not have the Norse inspiration that Eitr had, but it still looks mighty impressive – both in screenshots and in motion. Complimented with a soundtrack that sounds as good as that, we can’t wait to get our hands on it.

21c Ducks had released a demo sometime last year for the backers but sadly we were not able to get our hands on it. We did gather some insights on the game from a few gameplay videos of the demo that were released, but we still can’t clearly tell how well it plays. We’ll just have to wait for it to release or hope that the developers release a demo before the launch of the game.

The project was first conceptualized in 2014 and started materializing in 2018 with various tools, prototypes, etc. It was launched on Kickstarter on October 29th, 2020 and was successfully funded on 27th November 2020. Chrono Cross will be releasing on Steam, Switch, PlayStation, and Xbox sometime this year. So what do you think? Are you interested in the game? No store pages are up right now, but you can visit their socials given below.

You can find our other features in the Screenshot Saturday Spotlight series here.

by Pratyush on September 6, 2021
I promise you that this will be the last 2D platformer I cover for a while in this series. So, please indulge me. Rose & Locket needed to be on here. It is just that beautifully made.  So what is Rose & Locket all about? Taking place in the wild [...]

by Siddharth Patil on September 2, 2021
September is here, bringing along with it a fresh catalogue of exciting indie games. Here’s six of the many releases that we are looking forward to: Webbed Arachnophobes may want to look the other way for this one; Webbed is a physics-driven 2D [...]

by Pratyush on August 13, 2021
You won’t be held at gunpoint by pop culture nerds if you have never heard about Turbo Kid. It is actually a Canadian superhero comedy film written and directed by François Simard, Anouk Whissell, and Yoann-Karl Whissell. We didn’t know that [...]
Latest Reviews
The Gunk (PC) Review – A Suck-cessful Expedition
7.0
50
Treasures of the Aegean (PC) Review – Blast From The Past
7.5
8.6
Ori & The Will Of The Wisps: Review- Hearts On Fire
9.0
8.7
Latest News