Multiplayer Nights – 3 Underrated PS1 Games to Play with a Friend 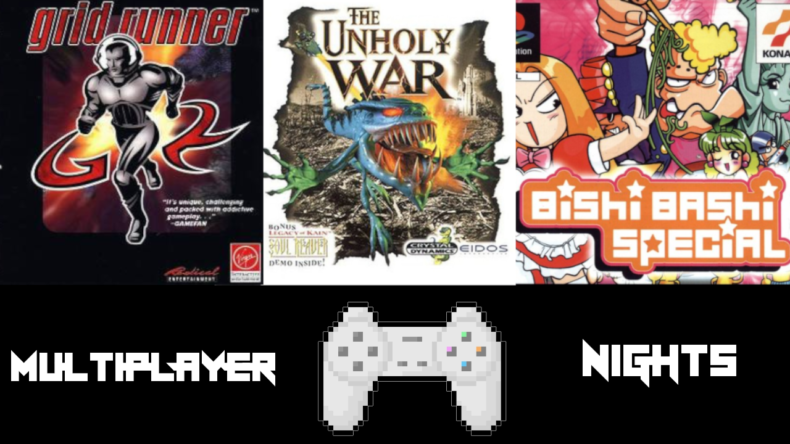 We all sat there in the late 1990’s with a few friends and a multi-tap, excited to blast our way through aliens or throw an opponent tumbling out of the squared circle. We all played the classics, with cumulative weeks of our lives dedicated to Tekken 3, Crash Team Racing and Worms Armageddon, but it’s absolutely worth digging your grey box out again to try some games you might have missed the first time around. Welcome to Multiplayer Nights, in which we will be running through three local multiplayer games per article, starting with the PS1.

The PS1 era was effectively the golden age of gaming, with the PS2 even building upon that to make for an even greater time. You’ll be hard-pressed to find someone who doesn’t agree with me on that. The games we are looking at today you might well have never played, or potentially even heard of prior to today, but once you’ve finished reading this piece, you should absolutely pick them up for your next multiplayer night.

Best explained as a cross between tag and capture the flag, Grid Run is a weird yet awesome experience. Released for the PS1, Saturn and PC, Grid Run was pretty well received by critics and gamers alike, and for some reason fell into obscurity rather swiftly.  Grid Run was initially thought of almost a decade before it saw release, and was pitched as an innovative, non-sports, non-fighting title, something that was pretty scarce for the time on the system. It follows the story of a freelance space adventurer who becomes captured by an evil with empress and tasked with competing in a deadly game for his freedom.

The game in question consists of the player needing to capture a set number of flags, which are littered across a large isometric arena. If knocked down by an opponent, the player will then need to chase them, knock them down and then start re-taking flag points. It’s sort of similar to conquest battles in Pandemic’s Battlefront/LOTR series.

The stages are really interesting, with conveyor belts on some of the levels making navigation tricky, and even trickier if you’re chasing someone. Teleports and other hazards are scattered across other maps, and the ability to build platforms ahead of you to reach flags is invaluable.

If you missed Grid Run when it came out, now is the time to pick it up. I’ve had a lot of fun playing it with a friend and I am sure you will too.

A game I will never get tired of talking about, The Unholy War is a brilliant arena fighter meets turn-based strategy game made by the developers of Skylanders. Set on a Heroscape-esque hex board, The Unholy War pits two teams against each other in all-out strategical warfare. You’ll have to gather resources to summon new units from your base, and pull off awesome abilities, and you’ll have to engage in 1v1 arena battles to take down every last one of your enemy’s units to win each match.

Matches can last minutes at first, but can easily last hours – and still not manage to feel like it. Time flies when you’re having fun, and The Unholy War is exactly that. The game has quite a lengthy campaign, and also a ‘Mayhem’ mode where you can get straight to the fighting side of things, without having to worry about the strategic elements the game has to offer.

A real draw to The Unholy War is the unit roster. There’s a lot of variety, and each unit has a special ability to use in the strategy mode. Some units are able to teleport, others are able to fire nukes at enemies and one, the Prahna Devil, is able to spawn other units via a coin flip system. These units also have their own two or more in-battle abilities, including homing missiles and a kamikaze ability that is incredibly powerful, yet also risky.

The Unholy War isn’t the cheapest game on the platform, but it’s worth every penny. A top-notch fusion of two brilliant genres. A must-play for any multiplayer night, especially if you’ve got a fair few hours to play with.

Releasing the same year as the PlayStation 2, it’s likely that the console release dampened sales on the Konami’s party title in the west. Bishi Bashi was much more successful in Japan, with new titles hitting the arcades as recently as 2018 (Bishi Bashi Channel). Bishi Bashi Special is hard to describe. It’s weird and wonderful. It features 85 minigames ranging from memory games to quick reaction games, and they’re all strangely themed. Moving the D-Pad across to stack ingredients on a burger quicker than your opponent or pressing the face buttons to correspond to actions as fast as you can is a hell of a lot of fun, and things are sure to get heated and competitive quickly.

Know of any other underrated multiplayer PS1 games? Let me know, and I’ll be sure to dig around for a copy and call a friend over!