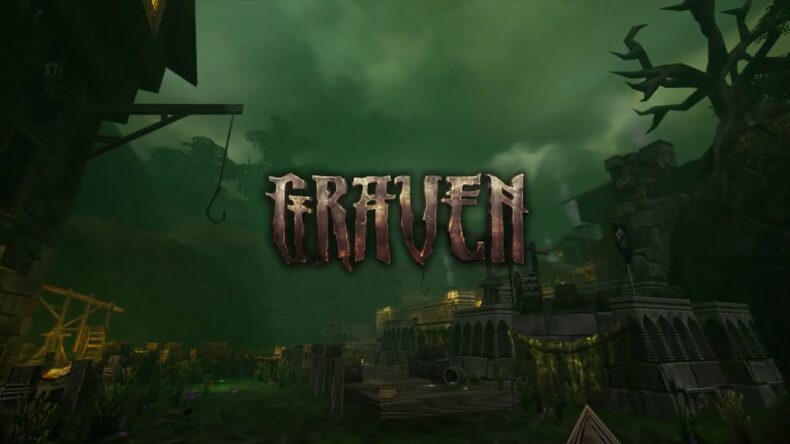 The 1980s-90s was a revolutionary period for 3D graphics in video games. Major heavy hitters, especially in the PC space such as Quake and Unreal paved the way for future tech, both on a software and hardware level. In fact it was such an influential era that people continue to reminisce about these “golden days”. Thankfully, devs still haven’t forgotten their roots which explains the resurrection of numerous retro throwbacks we’ve seen in the market through the years, especially with regards to FPS titles: ULTRAKILL, Project Warlock, Ion Fury and many others are shining examples of the modernization of the old school formula.

That being said, 3D Realms and 1C Entertainment’s Graven is the newest kid in town, quoted as being a spiritual successor to the Hexen series. Developed by Slipknot Ironworks, it is an exploration-driven FPS game with RPG and immersive sim elements. But whether it is worthy of a seat amongst its inspirations, remains to be seen.

The first thing to know is that Graven is currently in early access. As it stands now, the game has only a few hours of content; around, 3-4 if you take your time exploring and messing with its systems. In fact, the game got its first patch at the time of writing this preview and addresses the numerous issues players complained about since launch – so it’s good to see the devs are hard at work and listening to player feedback. The patch includes general bug fixes, new additions, and some tweaks to the overall gameplay. Many of these changes will be looked at further in this preview.: 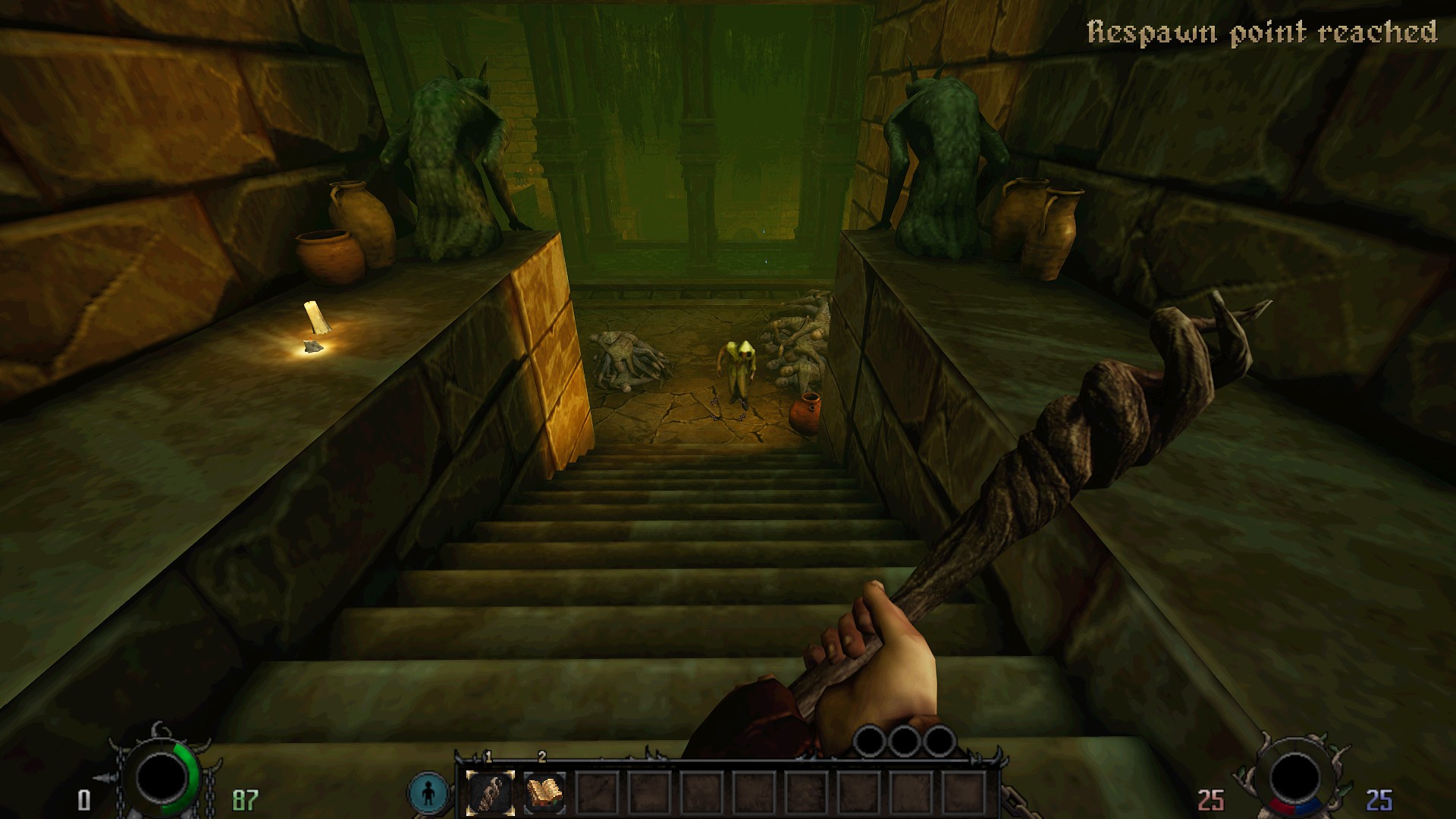 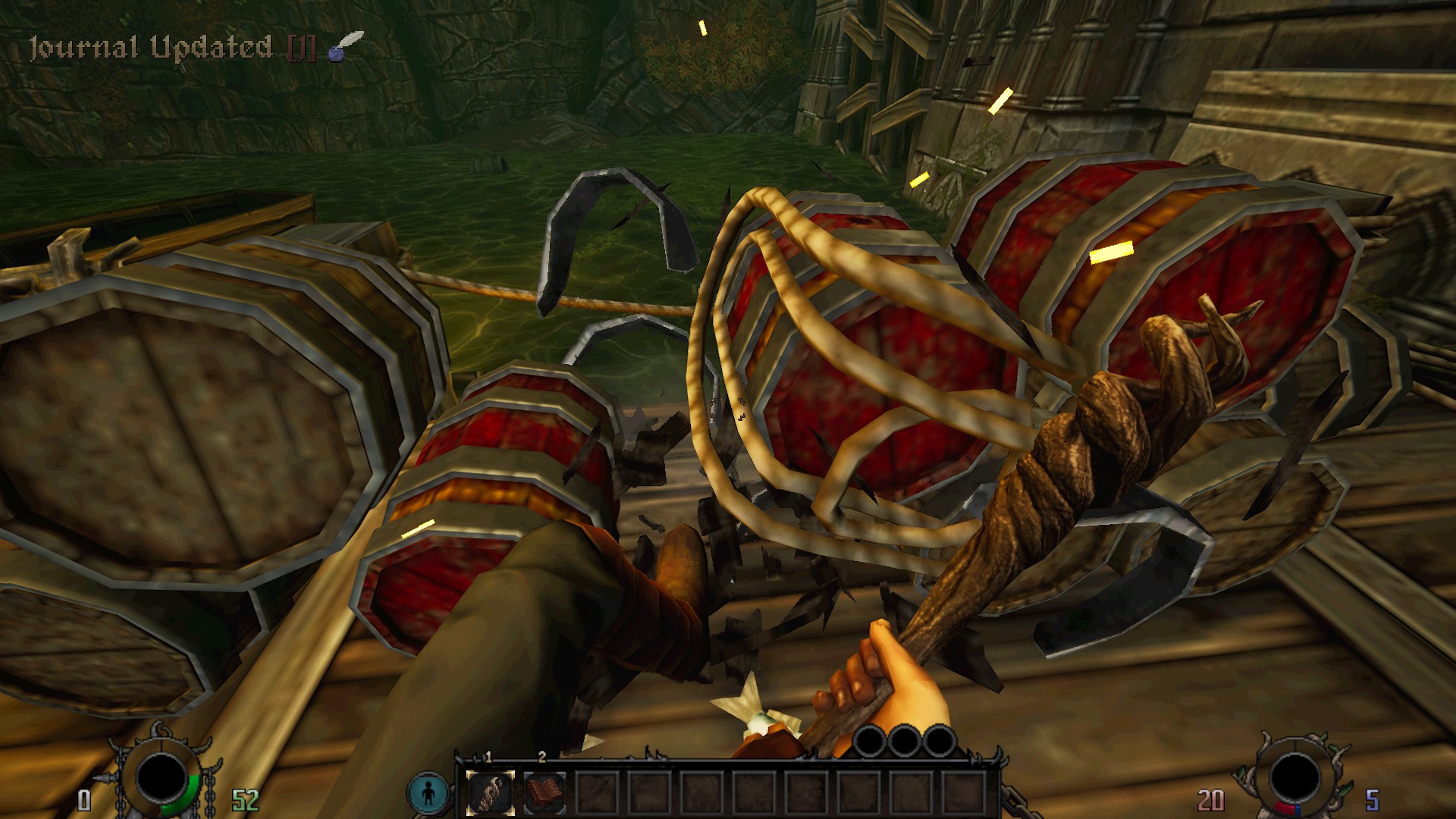 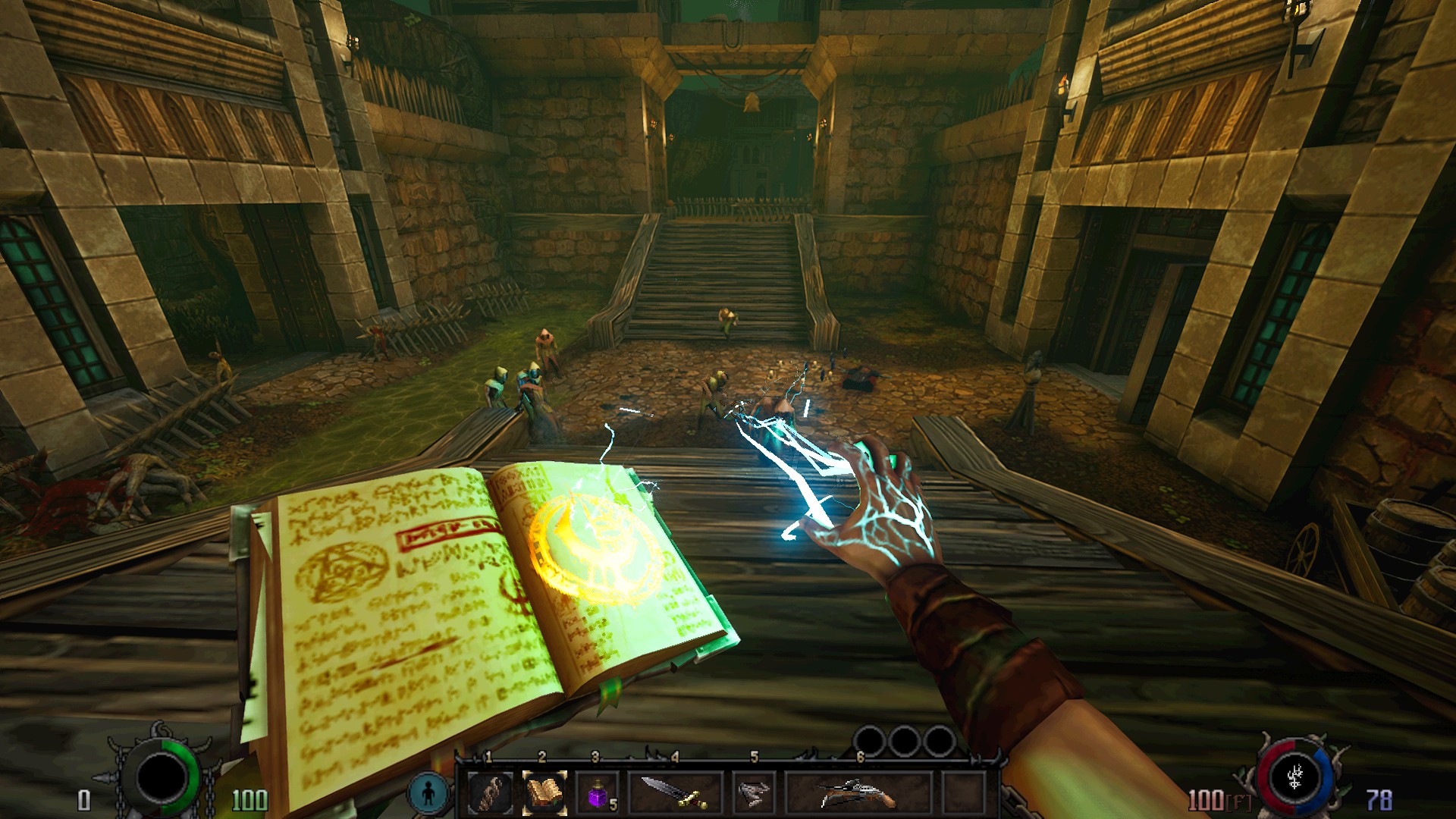 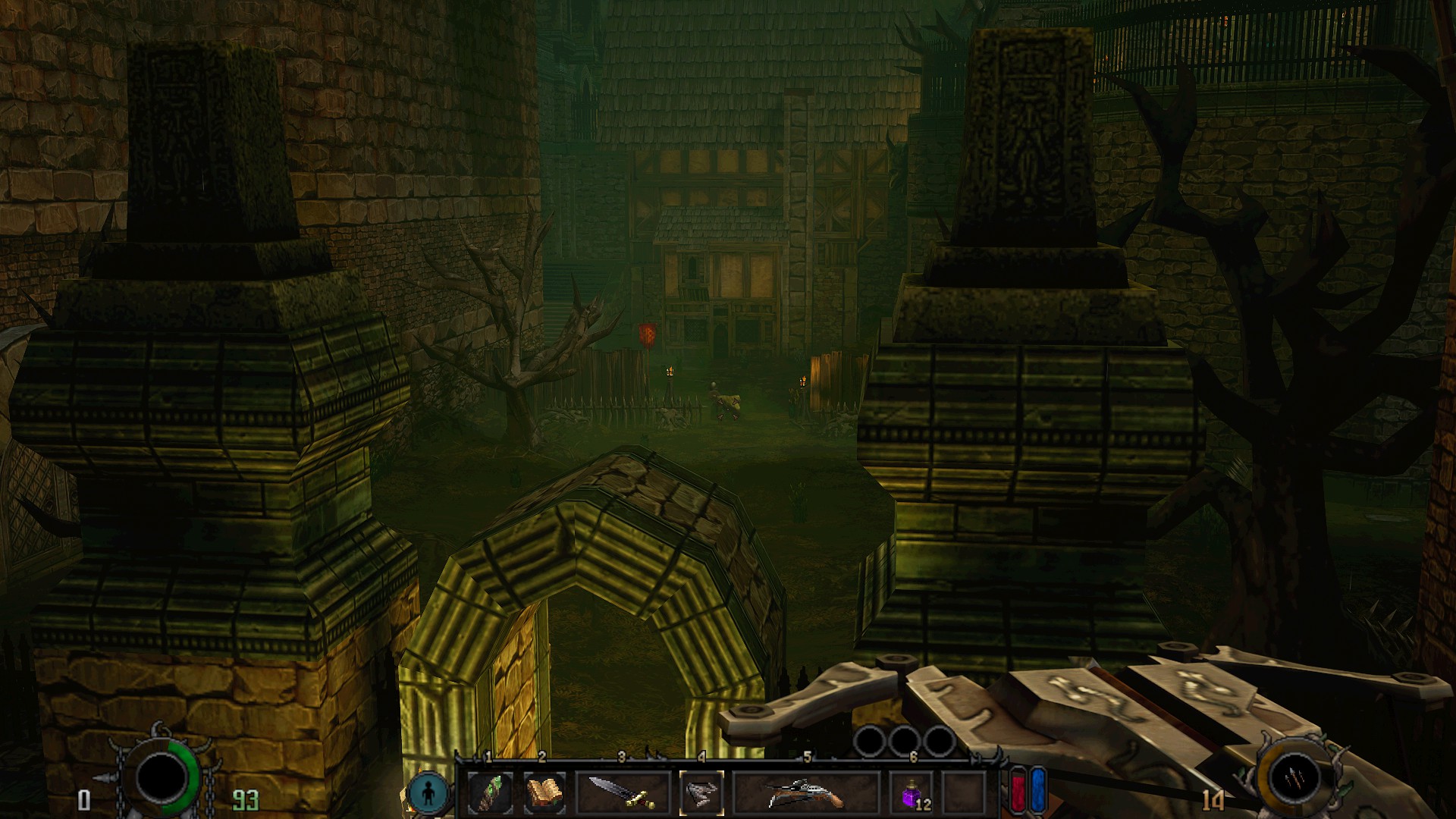 As previously mentioned, this is an exploration-driven FPS – and that is about it. The protagonist is an exiled priest ferried to rid a quaint town of a mysterious plague. Staying true to its roots, the narrative is certainly not the focal point of this game. Minus some instructions from an NPC and your trusty journal to keep tabs on what you’ve learned so far (and what you could do next), the game leaves the player to their own devices.

The priest starts off on the docks of the town, armed with only a staff and a tome/spellbook; there onwards, exploring and interacting with anything and everything in the world forms the basic loop of the game. Any new spells acquired are added to the spellbook, each having unique uses – for the record, the game originally only included the fire spell, while the update adds the Discharge (electricity spell). The staff allows bashing open crates by default… and enemies too. Besides these, there are also a cool variety of other weapons – a “wristheld” crossbow, for example, or the Peat Launcher, a powerful “grenade launcher” that fires explosive peat bricks. All weapons can be upgraded at the blacksmith in the final game, but so far there is no such option – in fact, post-patch, the blacksmith has been disabled entirely; this is a good thing as the game originally let the player outright BUY weapons that otherwise required exploring monster-infested areas to acquire them.

Speaking of monsters, there’s a decent variety in the demo: from shambling zombies and angry skeletal warriors to acid-spewing one-eyed bats and large, lunging lizard-things. Sadly the AI is basic and its easy to outmaneuver them by just strafing around them, whacking away with a sword till they drop. Things can get a bit messy when there’s a large mob of creepies, but the environments are often spacious enough to allow keeping a distance. On that note, the enemies are more aggressive after the patch. Also, pickable drops from boxes or just placed around the world help replenish ammo, mana (for casting spells) and HP.

The priest can run, climb and even swim/dive; overall he controls fluidly with little to no problems. The game’s UI elements allow tracking HP, mana, stamina (post-patch) and a hotbar to which items can be bound to – unfortunately, swapping between items between the inventory and hotbar is more cumbersome than it should be due the Resident Evil 4-like grid system. This often brings the fast paced combat scenarios to a crawl, if not a screeching halt. 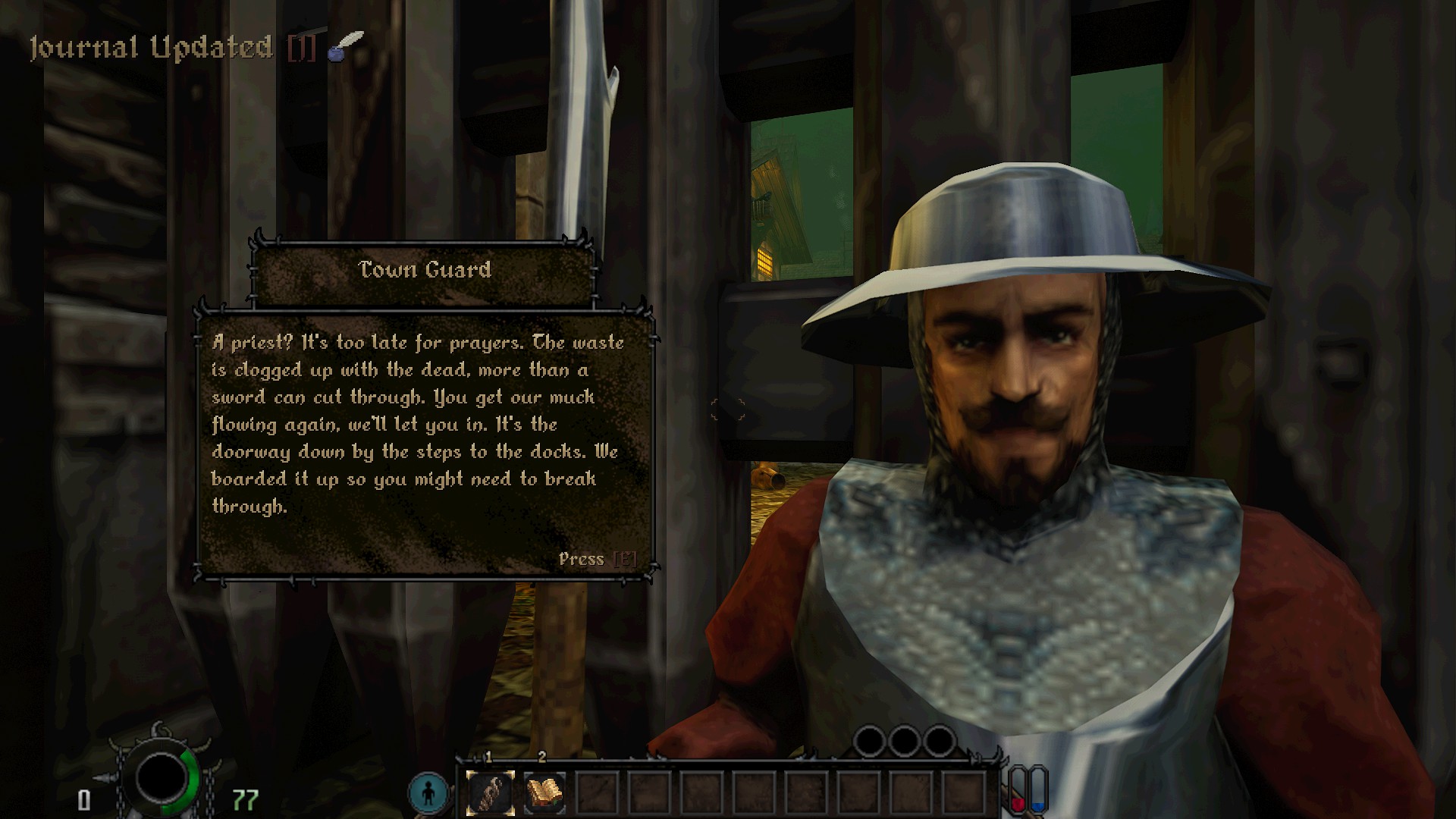 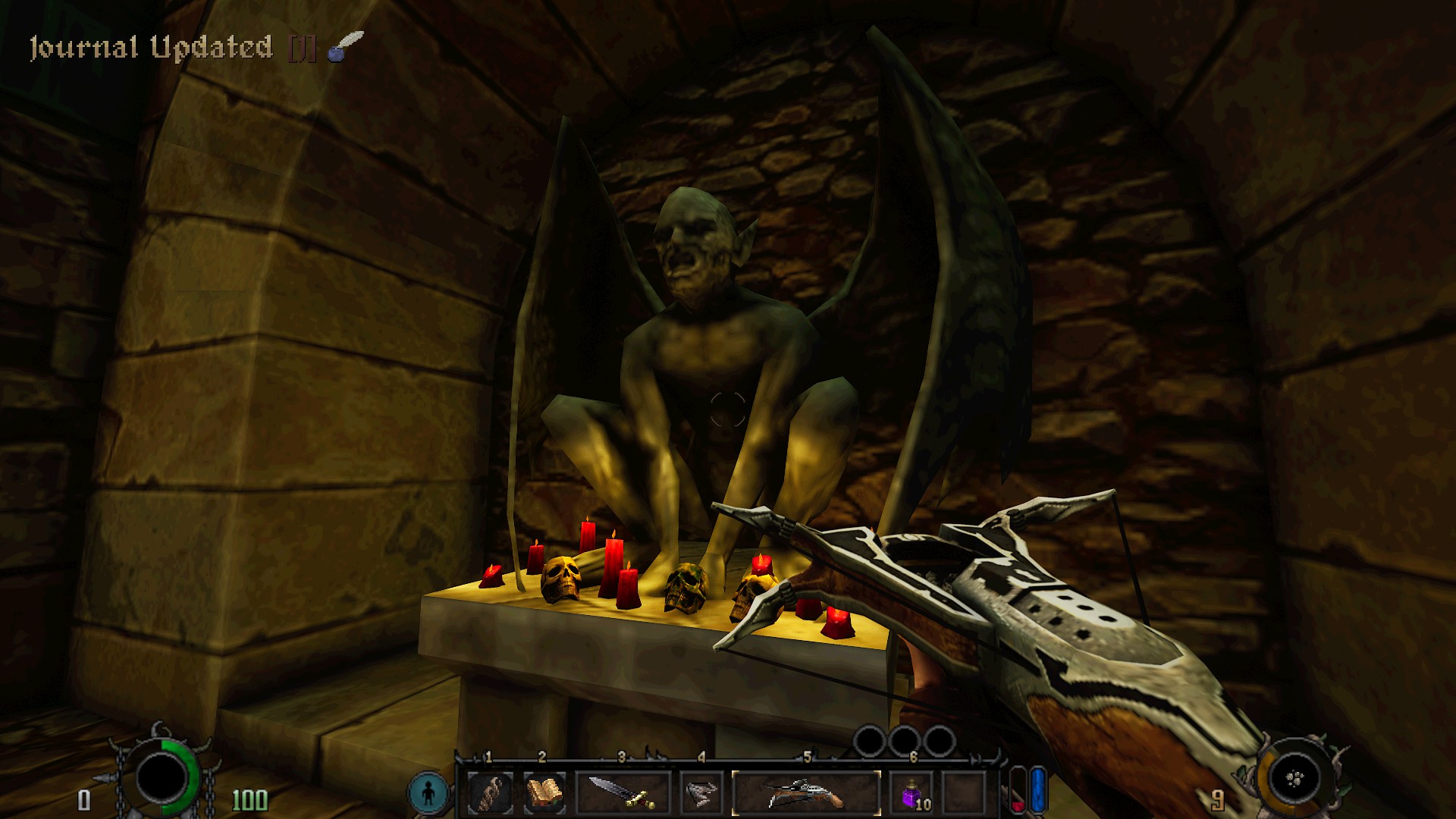 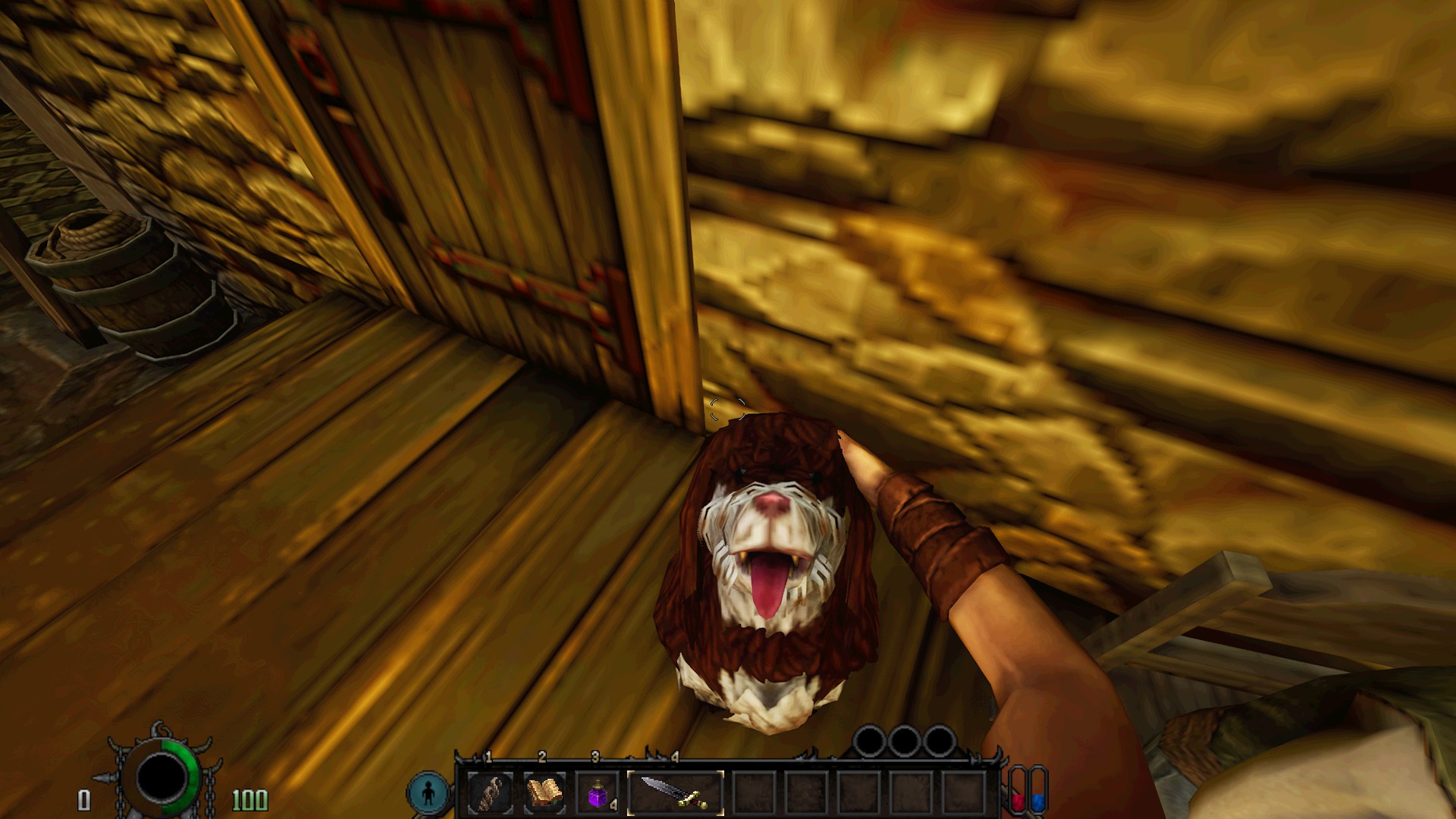 Developed on Unreal Engine 4, Graven does a stellar job of emulating the look and feel of a game right out of the 90s, what with its visual blur of greens and browns. Low poly models, roughly textured environments and the lighting all work in tandem to keep up the illusion. Atmospherically, it’s eerie from start to finish; it manages to instill a sense of awe as well as foreboding while the game’s ambient BGM loops throughout, only pierced by clank of the priest’s sword and the cries of the undead it just gutted.

All in all, it’s a good looking and sounding game that embraces its aged origins with enthusiasm and also a nostalgia treat for fans of the oldies. 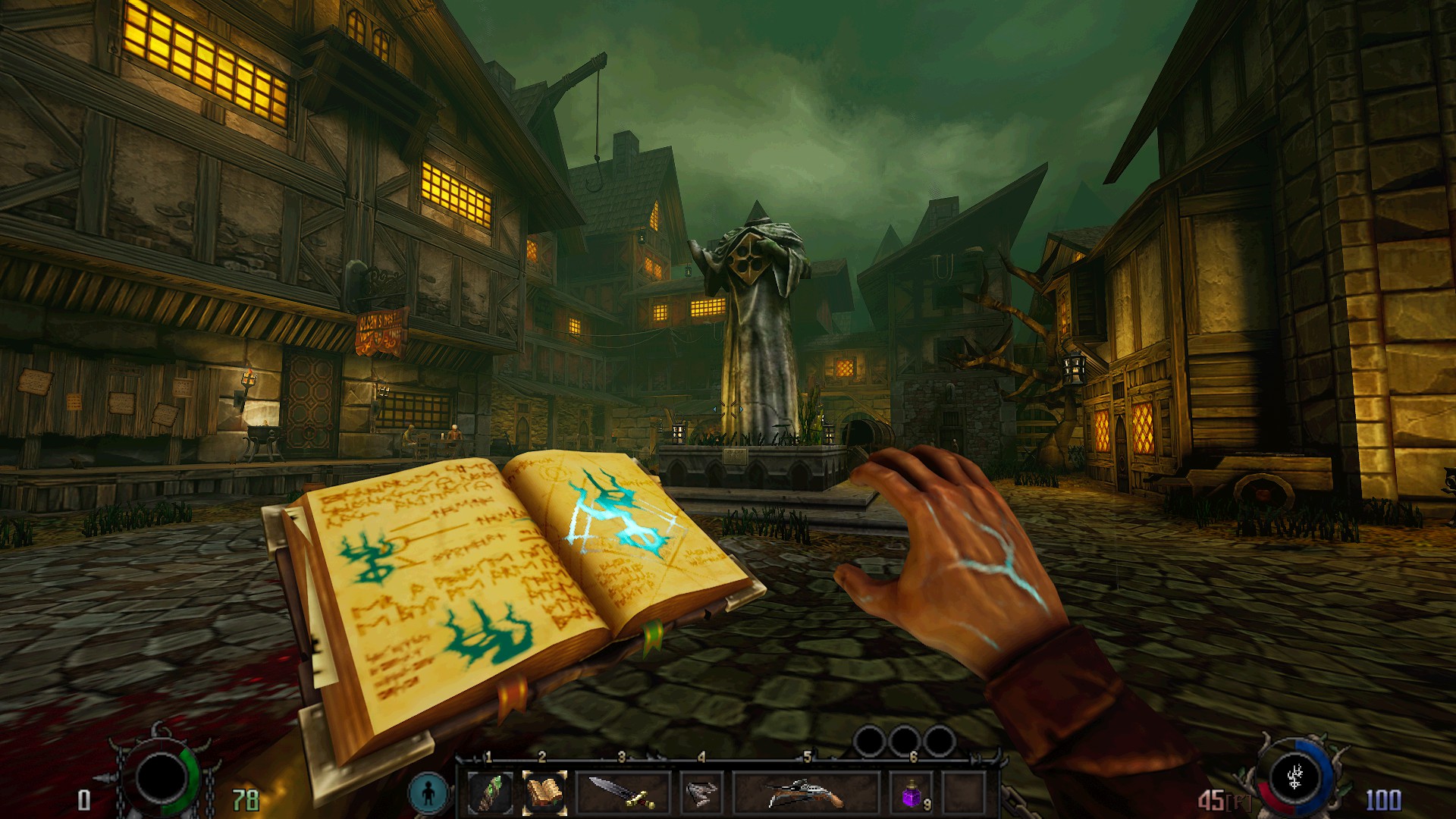 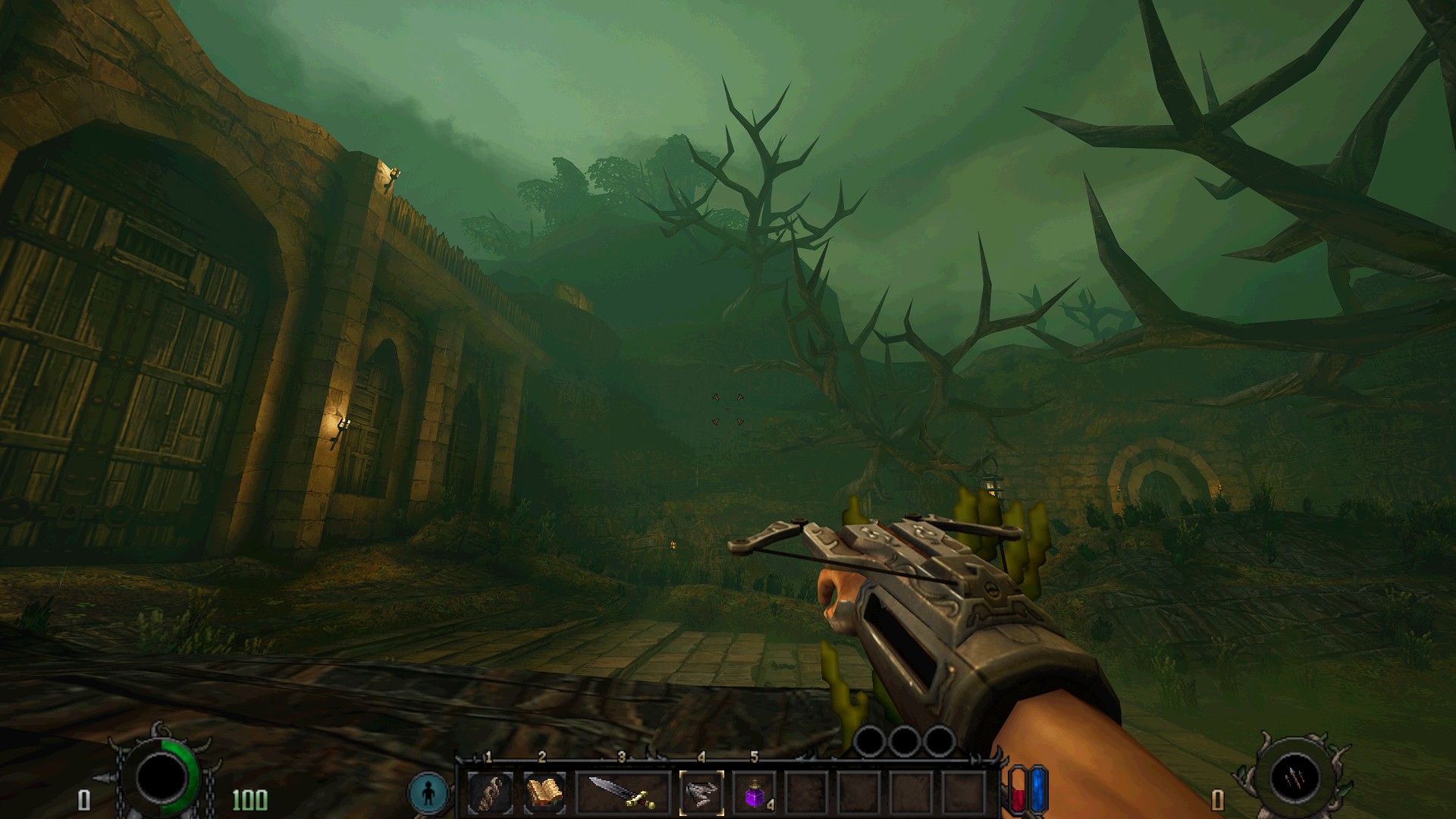 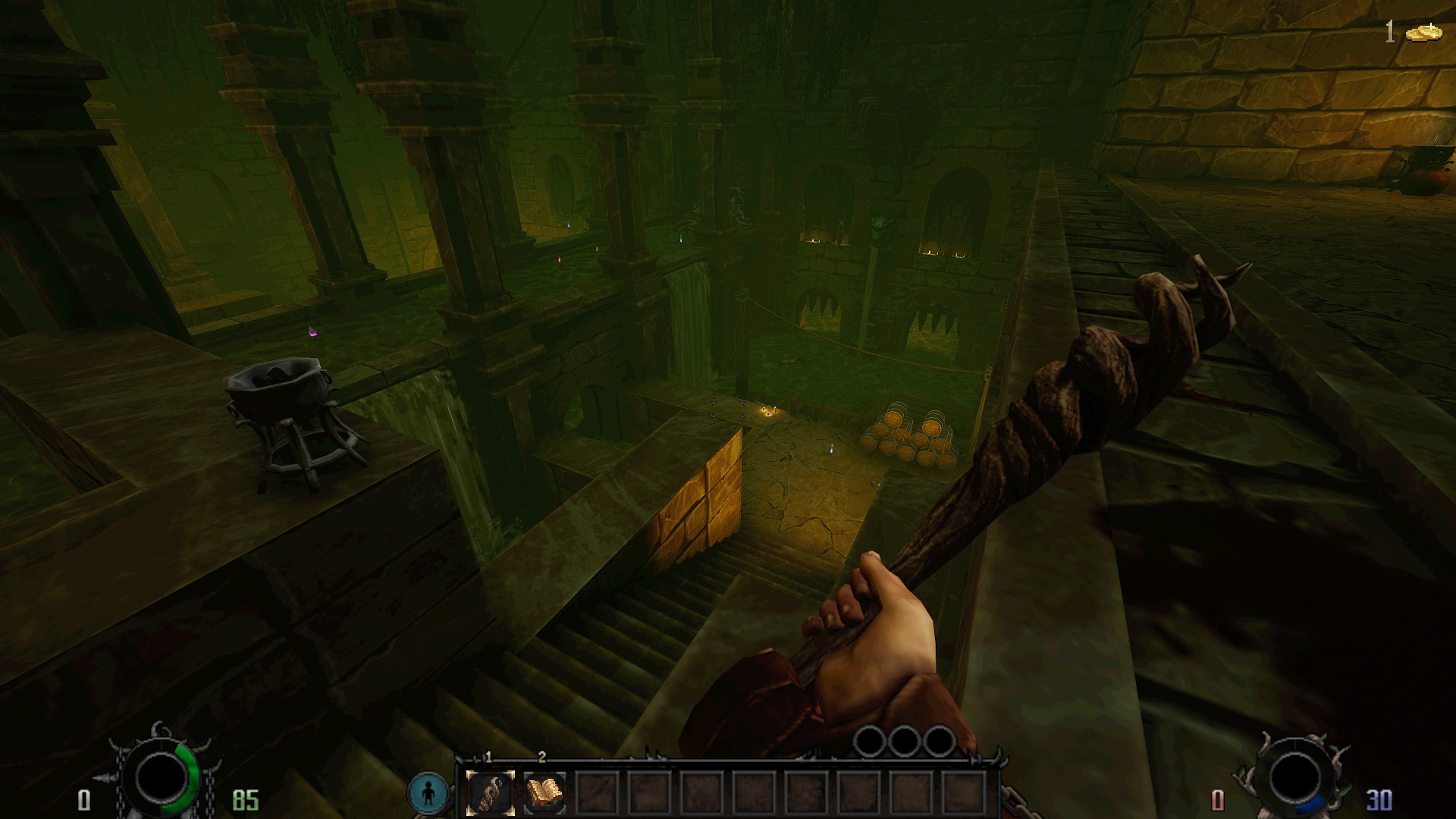 The world is divided into several biomes (punctuated by small loading screens), many of which are labyrinthine in nature packed with secrets to uncover, puzzles to solve and monsters to kill. Overall the level design is varied and none of the areas drag on for longer than they should. Nearly each area has a shortcut, often unlocked using a series of tools and mechanics not acquired yet – and this is where Graven shines not just with regards to exploration and backtracking, but also immersive sim elements.

Enemies with wooden shields? Set them on fire to destroy them. Foes chasing through a body of water? Electrocute the water with the Discharge spell. Yes, these are limited interactions for limited scenarios but any level of organic design is always welcome. The game “ends” with somewhat of a whimper – but there’s still more to come which I thoroughly look forward to. 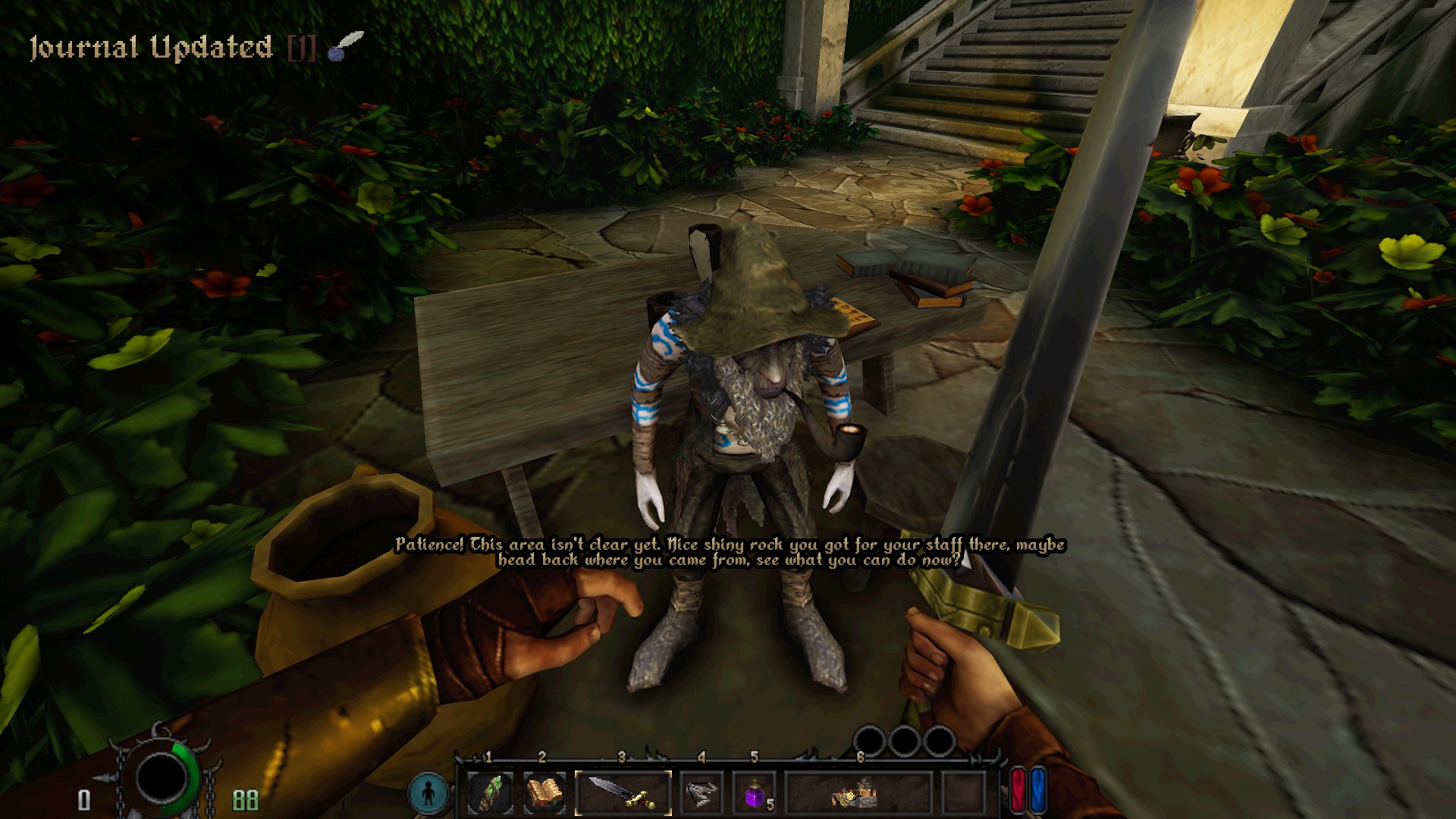 Graven admittedly had a shaky launch (looking at the mixed reception on Steam), but the recent update has sparked a hope within me that the devs might just turn this around into a must-have experience; it certainly has the potential for greatness, once the poor design cobwebs are brushed away and its systems are tweaked. The final release is scheduled for sometime later this year.

Have you played Graven? What are your thoughts? Sound out in the comments below.