Technobabylon is one of those games that really nails the cyberpunk setting. It follows almost all of the cyberpunk tropes and still manages to create an interesting story and one of the best cyberpunk games.

Developed by Technocrat Games and published by WadjetEye Games in 2015, it was made using AGS. Initially developed as an indie project by its game designer James Dearden in 2010, he decided on episodic content and only released two episodes, before putting the project on hiatus. After meeting WadjetEye founder in 2012, they partnered up and eventually finished and released the game in 2015, featuring improved graphics and voice acting.

One of the first things one will notice is the attention to the lore and world-building. Almost everything in Technobabylon has an explanation and a reason why it’s there. The backstory and lore are really interesting and only gets deeper as the game progresses.

The game is set in a city on Newton, which is governed by a sophisticated AI, known as Central. This virtual entity maintains various systems and any laws passed by the government, but Central also has authority over Centralized Emergency Logistics (CEL), which acts as a police force. Technology has made huge advancements, eradicating most of the diseases, and creating nano-mechanical welfare devices which allow users to modify their brain functions, or mentally interact with computers. One of these inventions is Trance, a virtual reality system in which users can create programs and socialize with other users. 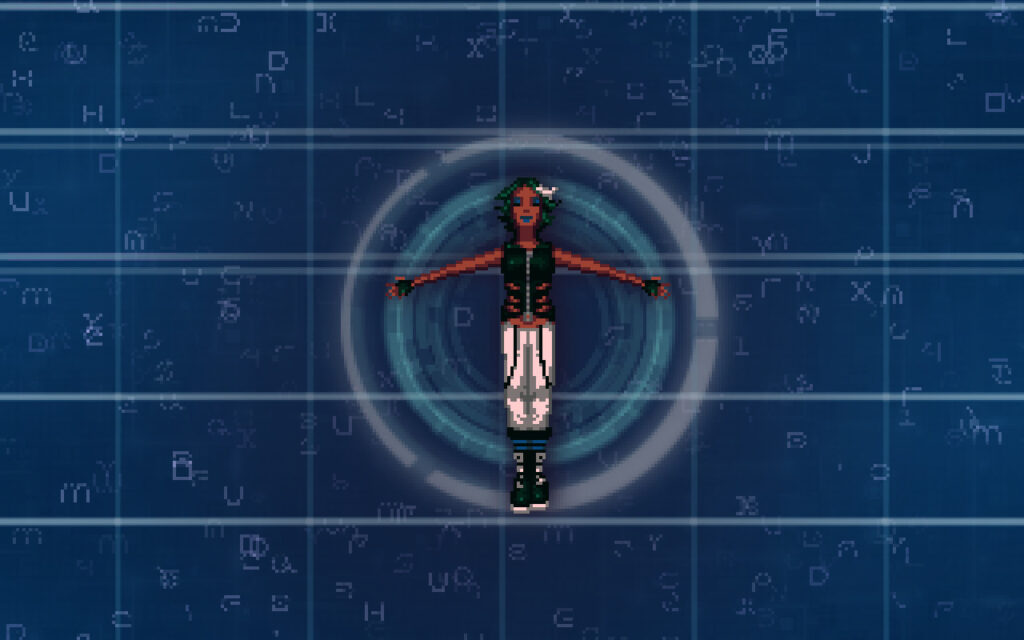 In Technobabylon you will control multiple protagonists, all of them with their own personalities and beliefs. You will play as Latha Sesame an unemployed addict to Trance, who finds herself locked in her apartment and kicks off a series of events. As the game progresses you will also play as agents of CEL, Charles Regis and Max Lao investigating a series of murders by a serial killer known as Mindjack. What’s particularly interesting is that the Mindjack is able to extract information directly from the victim’s brain.
As the story progresses, slowly all of the characters will become connected and they will discover things that will question everything they know.

The strongest aspect of the game is its writing and world-building. The game has an explanation for almost everything, whether it’s technology, history, political situation, food, etc. In addition to the various beliefs held by other characters, you can also discover more of their backstories and motivations for certain actions.
While the game is set in a cyberpunk setting, the game doesn’t have that dystopian feeling often seen in most cyberpunk works. Instead, the game is grounded in some sense of realism, and there is the sense that the world is still going forward and not everything is bleak as it seems.

What really adds to the narrative are the characters that you play as. Technobabylon features excellent character writing and voice acting, which helps make memorable characters. The dialog is never forced or too on the nose, but instead natural flowing, which in turn keeps the plot grounded, and the amazing delivery of lines by voice actors actually enhances the story. 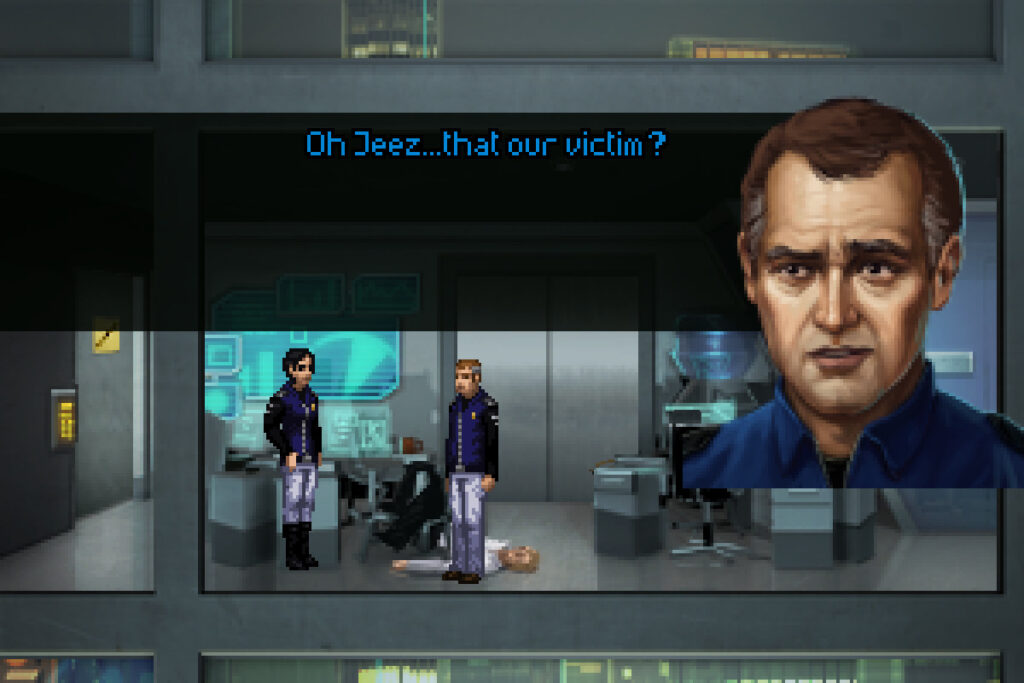 Techobabylon plays similarly to the classical MS-DOS point-and-click adventure games. The gameplay is relatively simple, with left-click being used to interact/pick-up object, and right-click to examine them. The game restricts your movement more than other games, but it makes up for it with dialog and puzzles. The puzzles in the game aren’t hard, but there are several challenging ones near the end of the game. In addition to solving puzzles, you will also have to make choices on how to solve certain puzzles, but these have little impact on the overall story.
The game also cleverly uses Trance and using organic computers you have the option of hacking and interacting with objects as you would in virtual reality. The Trance parts of the game are designed well, but a bit underused. The ascetics of Trance have that 80s/90s cyberpunk feel, and the puzzles are a bit more abstract.

Overall presentation in both visuals and sound is excellent and only adds to the atmosphere. The graphics are pixel art but beautifully done like most WadjetEye games. The scenes were actually created in 3D, after which the artist would use them as the base for his art. The parts in Trance were specifically designed to be visually distinct from those in the real world, and they have that distinct 80s/90s cyberpunk feel, and the puzzles are a bit more abstract.
The voice acting is excellent, and there are several returning actors from the other WadjetEye games.
Like most games from the developer you can also turn on commentary, which will provide insight into game’s development, art inspiration and process and also bloopers. With these turned on, one can see the passion and fun that went into creating the game, which is always nice to see. 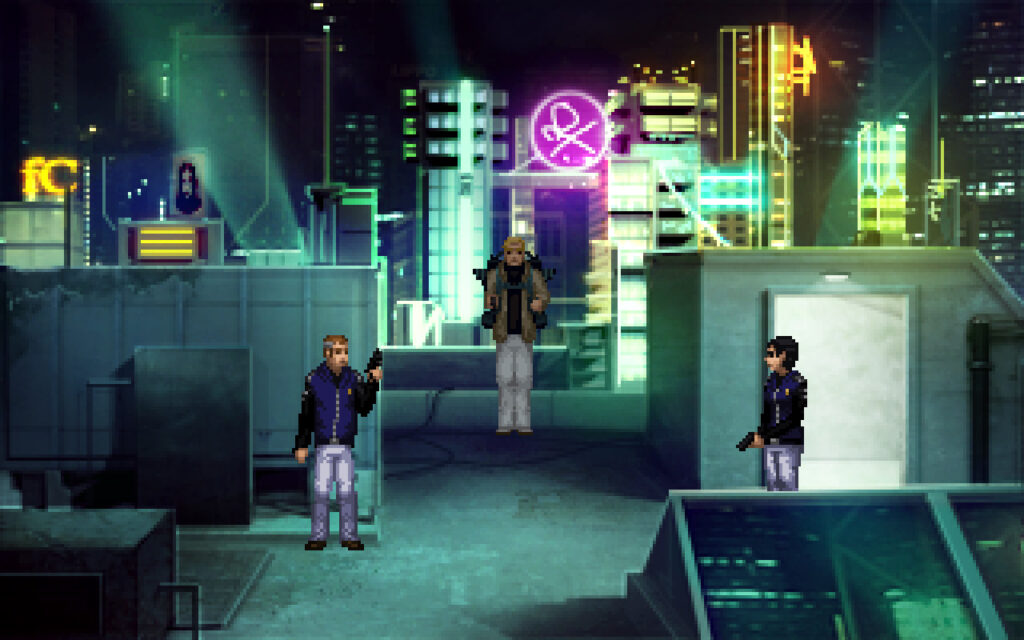 In conclusion, Technobabylon is an easy recommendation if you’re a cyberpunk or an adventure fan. If you’re a fan of the latter, you will like the world-building, characters and the concepts in the game and those who enjoy the latter, you can’t make a mistake by playing a WadjetEye title. The game is available on both Steam and GOG (the GOG version also offers bonuses, such as Behind the scenes videos, Storybook, Soundtrack, etc.).
If you’re looking for a good cyberpunk story, give Technobabylon a try. It’s got excellent writing and characters, in addition to the low price which makes it an easy recommendation.