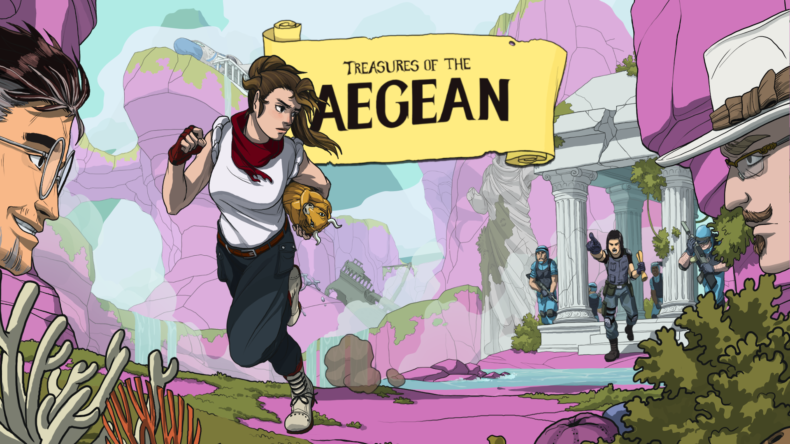 Treasures of the Aegean is a 2D adventure puzzle game influenced by the likes of Pitfall, Prince of Persia, Flashback, and Tomb Raider. You play as parkour master Marie Taylor and treasure hunter James Andrew who are in search of a forgotten civilization for secrets and treasures.

The game is set around a lost civilization that is both advanced and distanced from the rest of the world. Players must use parkour to traverse the environment – surfing steep slopes, climbing high walls, and swinging on vines. The game also features a time-loop mechanic where players must solve puzzles in order to discover the hidden secrets of the island before they disappear and the loop starts again!

As the story unfolds, players learn about historic events, real characters, and mythology whilst adventuring around the forgotten city. Players will discover a lost Minoan citadel, a sunken Ottoman fleet, and doors to an underground palace – uncovering details of the former population that met a tragic fate.

Treasures of the Aegean’s aesthetic is inspired by classic European comics, notably The Adventures of Tintin and Asterix.

The game is developed by Undercoders and published by Numskull Games. It will be available digitally on November 11th for Switch, Xbox, Steam, and PS4/5. A physical release is planned for Switch, PS4/5 in both a standard edition and a Collector’s Edition which will include an artbook, soundtrack CD and cloth map.

by Siddharth Patil on September 8, 2021
Focus Entertainment and Saber Interactive have finally revealed a release date for World War Z on Nintendo Switch. This horde based co-operative zombie shooter garnered a bit of attention back in 2019 for rendering up to 1000 zombies at once on scree. The [...]

by Siddharth Patil on September 7, 2021
Debuting back in 2010, Remedy Entertainment’s Alan Wake released to pretty good critical response; however it was it’s eerie atmosphere and fresh take on the third person shooter blueprint that made it a fan-favorite. The titular writer finds [...]
Comments
Leave a reply