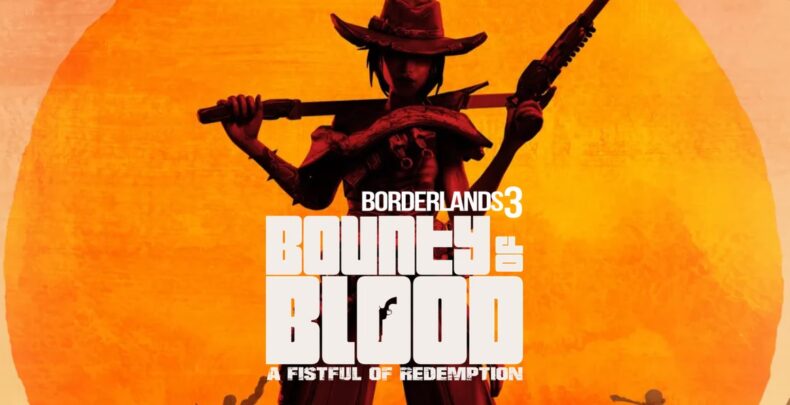 Before we start, let’s make one thing clear: Borderlands 3 wasn’t the “coming of the messiah” that everyone was hoping for. What could’ve been an epic entry in 2K’s popular looter-shooter franchise, more than just underwhelmed fans when it dropped – from the terrible writing to underwhelming design decisions, it left a bad taste in fans’ mouth, me included. But Gearbox seems to have learned from the backlash and it shows with their post-release DLC content. The third and latest expansion titled Bounty Of Blood successfully continues this winning streak.

Our Vault Hunters come across a bounty demanding a worthy gunslinger and thus they travel to a new planet: Gehenna, home to Mars-red desert environments reminiscent of the Wild West with a touch of East Asian architecture. The town of Vestige, where you first touch down, is under threat of invasions by a gang called the Devil Riders: cowboy bandits riding big dinosaur-esque creatures. Of course, the Vault Hunters are more than happy to take on the job.

This 6-7 hour journey is a sizable experience that introduces new characters, enemies, vehicle type, loot and even gameplay mechanics – all for the better. The emerald-robed character Rose is easily the star of the show, and she gets the spotlight almost right away when you start the DLC campaign. While other characters aren’t really that memorable, they’re thankfully not cringe either nor do they overstay their welcome. The overall design approach remains the same as the base game: go from point A to B, kill everything that has a health bar and grab shiny loot, while occasionally interacting with triggers and buttons as per context of the quest.

The game tries it’s best to reduce tedium with variety and actually decent humor. For the former, there’s a few new tricks the game introduces: Jump pads that send the player flying in a direction (functionally the same as those in Borderlands: The Pre-Sequel), exploding plants that can break down highlighted environments, teleporters that transport the player between linked areas and mind-controlling bugs that spawn from conveniently placed nests once shot. These keep the gameplay fresh (unlike the base game’s large expanses of boring nothingness) even though they’re gimmicky and feel pointless in the long run.

There’s some new enemy types, with the reptilian Devils and elemental horse-like Beliks both of which are fun to take down. Bosses are varied and interesting as well. But what’s the point of all this if there’s no cool weapons to demolish baddies with? Right? Well, Bounty Of Blood has you covered. Over the course of my playthrough I came across several brand new legendary rarity gear from both quests and enemy drops, my personal favorite being the Light Show – a pistol that shoots fire lasers like an assault rifle. It made quick work of everything that stood in my way, including the final boss – and yes, Borderlands 3’s gameplay is as frantic and fun as ever. No complaints there.

What I do have issue with mostly stems down to optimization: the game is still a mess on PC, with stuttering every now and then, and I even had the game crash on me halfway through a mission. It’s disappointing that Gearbox considers nerfing guns more important than performance for it’s game especially coupled with the dreadful Denuvo DRM.

Despite these minor blips, Bounty Of Blood offers the player more reasons to keep playing Borderlands 3 and when it works, there’s honestly few games like it out there.