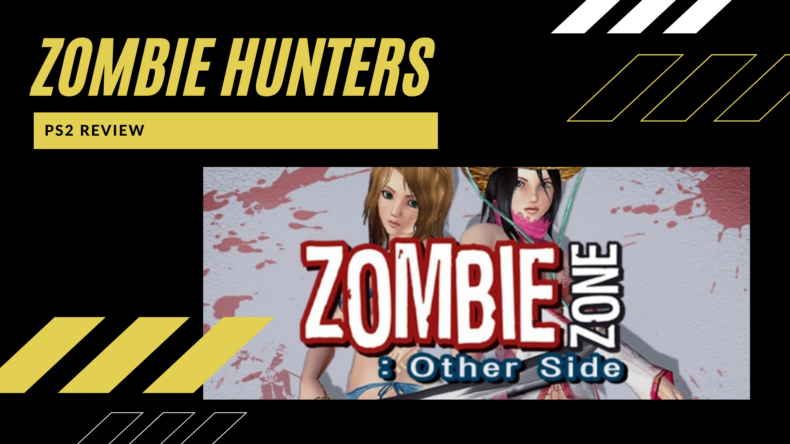 Since its appearance on the original PlayStation in 1998, The Simple Series was nothing but a line of budget-priced video games published by D3 Publisher and developed by several developers such as Taito, Irem, Success and Sandbot. For the most part though, these games were seriously generic, offering nothing but an interpretation of common video game themes, including racing, tennis, and board games such as mahjong and cards.

However, with the release of the PlayStation 2, The Simple Series would witness a drastic change as the games would begin to use larger genres such as RPGs, scrolling shooters, and in addition to original concepts like Demolition Girl. Unfortunately, most of the good ones were released exclusively in Japan, making it harder to get our hands on one. Nevertheless, among the myriad of Simple Series games, there’s one game that I liked for what it was. It is neither the best nor the worst, but certainly left a lasting impression on me. The game I’m talking about is Zombie Hunters (known as the Onechanbara series) for the PS2; an upgraded version of Zombie Zone which both were released exclusively in Japan and Europe. (Sorry fellow Americans and Aussies, you don’t need this kind of waifus. It’s bad for your future). 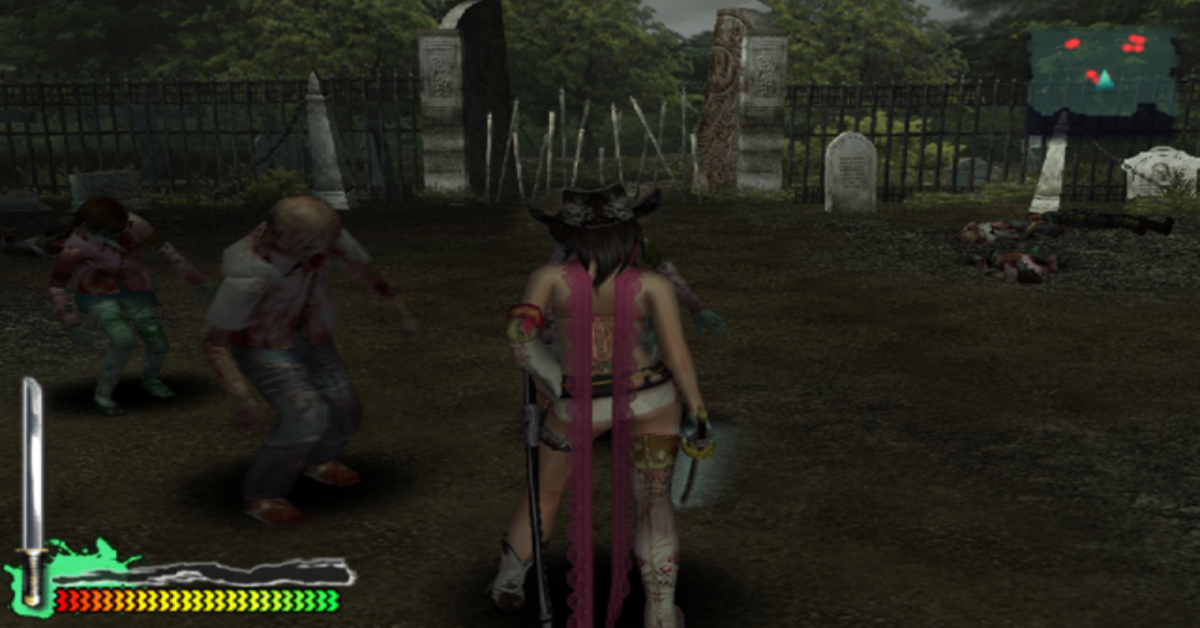 The game was developed by Tamsoft Corporation known for games such as Senran Kagura series, Captain Tsubasa: Rise of New Champions, Hyperdimension Neptunia U: Action Unleashed. D3 Publisher Inc published it back in 2005 for the PS2 exclusively in Japan, and was shortly imported to Europe.

In the game, you assume the role of several hot Japanese babes equipped with a full-fledged sword ready to slice anything that walks in front of them. Unfortunately, if you are looking for a story here, don’t bother, there’s none. The sole purpose of the Onechanbara series is to cut any walking dead on your path as you control a hot Japanese chick. No wonder why the series is so popular in Japan. This first entry, in particular, saw enough limelight to warrant a franchise. After each game, the series began to improve, offering new characters, new weapons, enhanced visuals, and even a story. 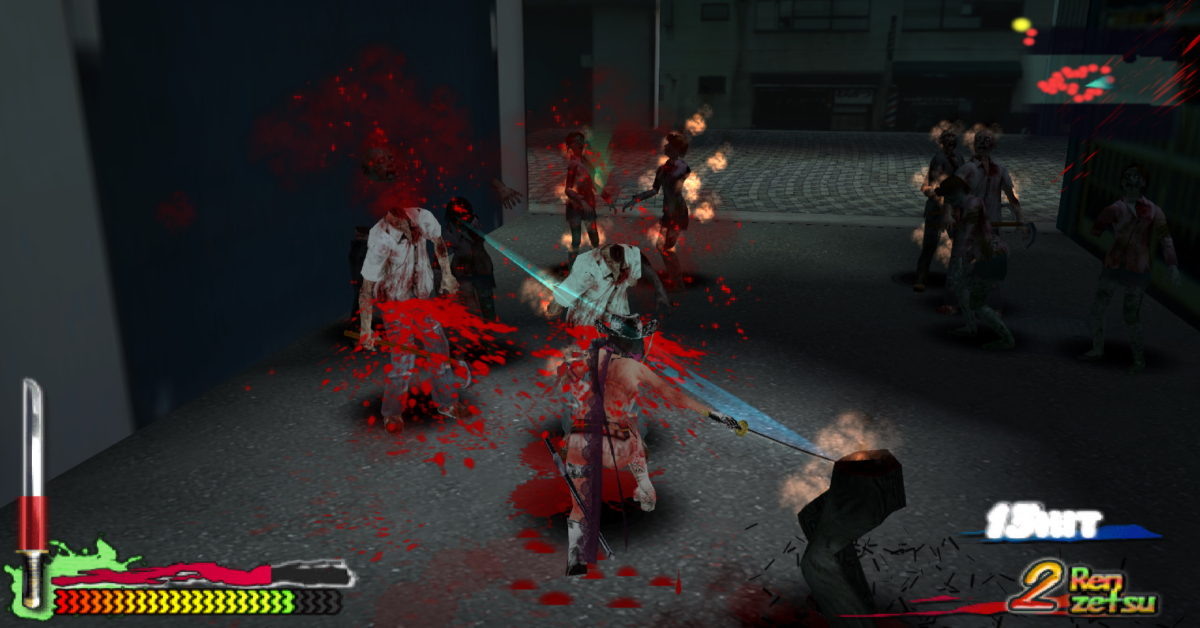 The gameplay is seriously violent as it features hack and slashes action where you hack your way through huge mobs of walking zombies at every corner. It only takes a few seconds for the environment to turn into a bloodbath sprayed with zombies corpses all over the place, and body pieces such as limbs, legs, and rotting heads. When it comes to the gameplay, Tamsoft has put some effort into designing the main characters to look both sexy, and stylish. And let’s not forget the details when swinging the sword to slice and dice them nasty creatures.

In addition, the combat style is quite fascinating for a low budget title such as Zombie Hunters as it resembles Warriors Orochi somehow. Not only are players are capable of executing deadly strikes, but they are also able to perform a string of regular attacks together to form a quick combination. In addition to this, the cowboy babe can launch her enemies into the air by holding the analog stick in different directions. The player can also execute a heavy thrust which can be followed by a crescent-shaped swing that cuts your enemies to half. Lastly, pressing the circle button activates a power attack capable of scattering your foes everywhere. Honestly, I think the more you play this game, the more you feel you are nothing but a bloodthirsty lunatic who kills zombies for a living. However, this blood has some consequences. 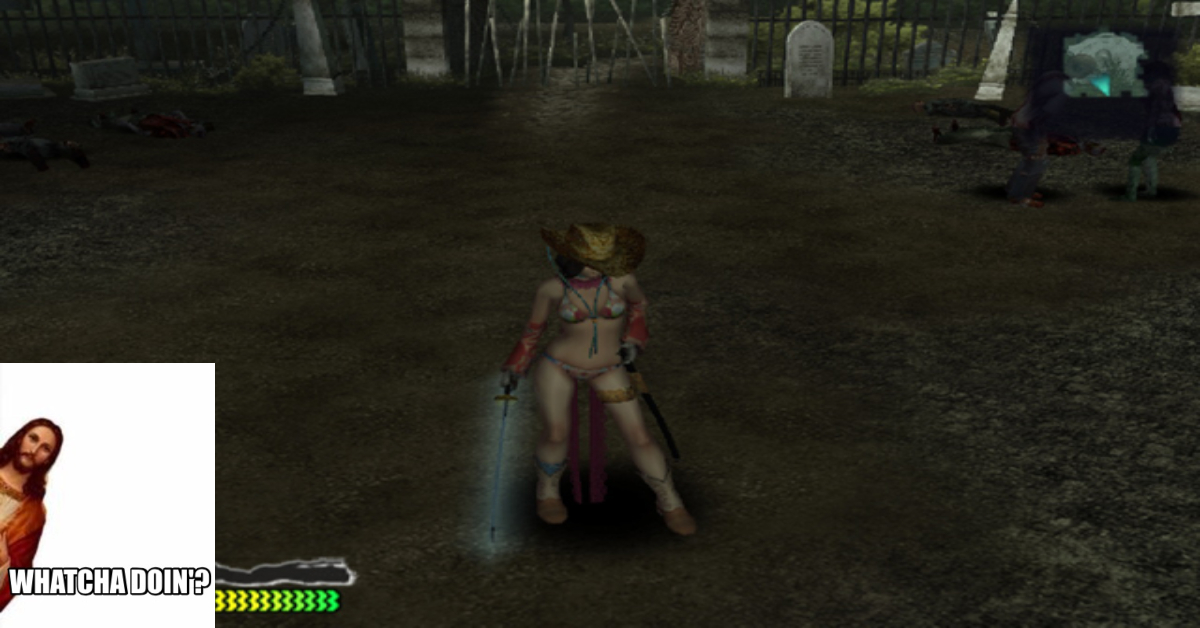 As you continue slaying zombies over and over again, your sword progressively becomes soaked with blood. This accumulation of blood on your sword isn’t beneficial as it makes the main character swing her sword slowly. To avoid that, swing your sword by holding the L1 button which flings all of the blood off your katana. Secondly, after purging a handful of zombies, this will allow you to transform into a full-fledged demon with increased speed and power once the bar is full, but it also lowers your defence state and drains your health slowly. To stop that, simply use one of your healing items after pressing the start button, or try backtracking to a location where you can find an ” Angel Statue ”.

Bear in mind, that if you continue killing zombies, you will be prone to keep losing blood. This can be noticed when Aya or any main character starts dripping puddles of blood on the floor after a while. I think this feature is a double-edged sword. It can be fun and challenging, or annoying and stressful. One feature I liked in the game is the ability to deflect projectiles. This is essentially the only defensive option available to the player, and replaces it with the latter which is awesome, and will come in handy against boss fights ( you only have to master it tho after hundred tries) 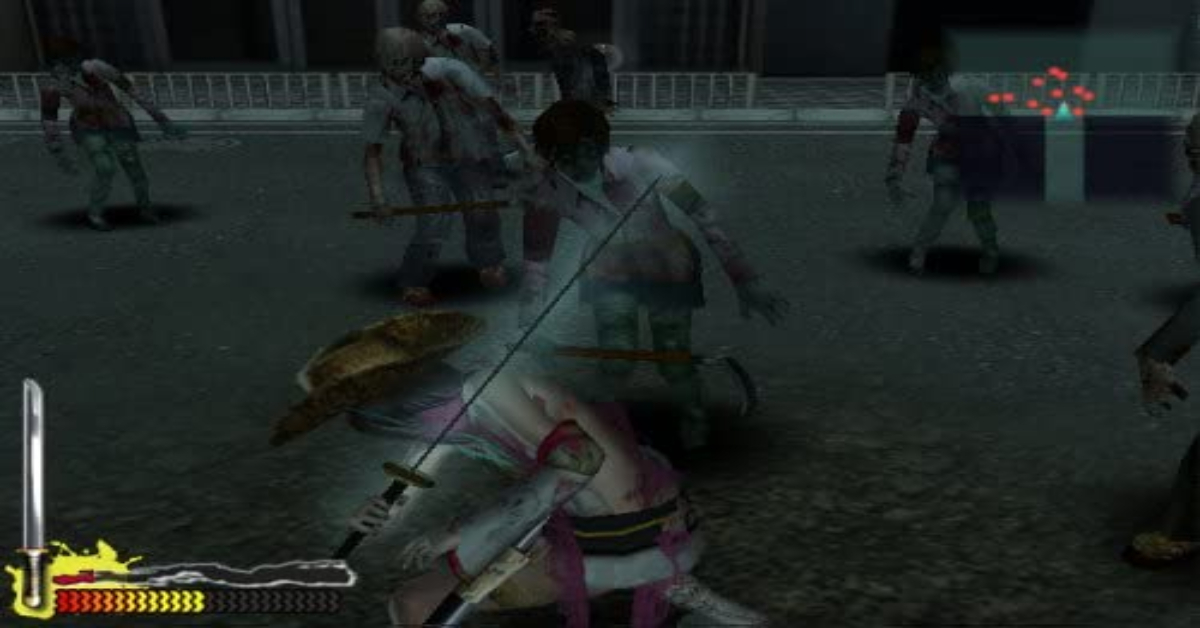 Last but not the least, let’s talk about what makes Zombie Hunters an annoying game sometimes. While I did compare the game to Koei Tecmo’s game, Warriors Orochi, the aforementioned comes with the same problems. Zombie Hunters quickly turns into nothing but a button masher where you fight hordes after hordes of endless zombies. Moreover, the level design is seriously lacking. The levels look the same throughout the game and the less said about the soundtrack, the better. The same music is repeated in every level of the game, except boss fights where your ears will thank you for allowing them to listen to something new. They did fix this problem in subsequent entries. To be fair to the game, it is a low budget title and players shouldn’t expect much in terms of added bells and whistles. Despite that, it remains a decent Musou games that fans of the genre will enjoy.

The final verdict: Is it recommended?

If you are a fan of button masher games such as Dynasty Warriors, Warriors Orochi or looking for something to pass time, this game is for you. The hack and slash combat is excellent despite being repetitive at times, but seeing how it’s nothing but a low-budget title, it remains decent for those who are looking to swing their sword playing with hot Japanese babes.

by Cola Powered Gamer on September 21, 2020
It’s always nice to see a passion project come to life, and VirtuaVerse is one of those games. Developed by Theta Division, a small team of artists and adventure game enthusiasts one can see that a lot of work and passion went into this game. [...]