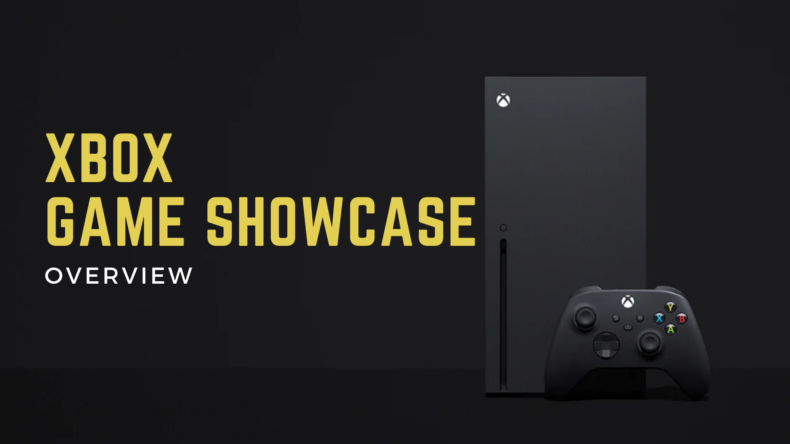 The heading might suggest that I had just ONE issue with Microsoft’s showing, but that’s as far away from the truth as it gets. These shows are meant to be gameplay showcases, not cinematic presentations. Now, I know this is completely one man’s opinion, but I don’t understand the point of “cinematic trailers” to begin with. At best they are a small indication of the story of the game, at worst they’re just false representations of the same.

The show ended with a 1 to 6 ratio for gameplay-to-CGI-footage time and yes I did count; approximately 10 minutes of gameplay among the full 60 minute show duration, most of which came from Halo Infinite. I also don’t think this problem is exclusive to Microsoft – I spent almost all of E3 last year wondering whether it was really worth the time investment if I just had to sit through cinematic trailers at all conferences except Devolver Digital’s.

Since the start of the generation, I have had this impression that Microsoft’s shows are a great way to know about upcoming indies that I might be interested in. While I wouldn’t say that the show was devoid of good looking indies, there wasn’t a single “HOLY SHIT! I AM GOING TO BUY THIS DAY 1” game. I don’t bite to their Halos or Gears or Forza simply because they don’t interest me. But Cuphead and Ori & The Will Of The Wisps (Blind Forest too) will go down as some of the most memorable games I have purchased and had absolutely no regrets paying full price for. Anyway, I digress.

Their pre-show consisted of interesting games like Exomecha, Echo Generation, Hello Neighbor 2, and Balan Wonderworld. In what I would say was a very decent run-up to the main event, these indies showed more gameplay than the rest of the show did and despite lacking the killer app (for the lack of a better word), they had me genuinely excited for what was to come.

Halo Infinite was the first game on the show and was the only one we saw comprehensive gameplay from. Now, I am not comparing here, but having come fresh out of Doom Eternal, the gameplay seemed underwhelming. Many people complained about how the visuals of the game looked sub-par and I don’t even have an issue with the visuals. I stopped caring about the visuals since the start of this gen when I realized that great (for clarification I would say realistic since that’s what the majority peddle and artistically great does not necessarily equate to realistic) visuals are almost always accompanied with boring gameplay. The visuals are fine. It’s just that the game didn’t “hook” me in.

After Halo, the show took a steep nosedive into being a snoozefest. Just to be clear, this isn’t a dig at ANY of the games that were shown. I am excited for S.T.A.L.K.E.R. 2. I AM DEFINITELY EXCITED FOR EVERWILD. The same goes for Psychonauts 2, Avowed (despite lack of gameplay), and CrossfireX. But cinematic trailers just don’t cut it for me.

Halo’s presentation was succeeded with the brilliant looking Everwild. We know that the game has potential because an acclaimed studio like Rare is behind the game – but still, in-game cinematics can only go so far to grab one’s attention. Everwild was already announced at last year’s E3. Now would have been the perfect time to show off some gameplay to make people excited.

We thought that announcing DLC was a new low in E3 presentations when Microsoft did it in one of the previous E3s, but they dug in deeper yesterday when they took out time to announce the “Definitive” version of Ori & The Will of The Wisp that will be running at 120 fps on the Xbox Series X. Yes! They took out time to announce a 120 fps version of a game. Not a DLC. Not an expansion pack. Nope, just a hardware upscaled version.

Obsidian took to stage next as they showed off 3 projects that are in the works. I wonder if that isn’t stretching the studio a bit too much even if they have been acquired by Microsoft for the Xbox. The first was a DLC to The Outer Worlds called Peril On Gorgon which was followed up with a short trailer for Grounded featuring a Cyberpunk 2077 reference. And then there’s Avowed – a first person RPG set in the Pillars of Eternity universe, and also quite clearly a jab at Bethesda’s Elder Scrolls series. What a cruel way to cut off the trailer right when the character PoV was shown without any gameplay on display.

On that note, Psychonauts 2 was perhaps the best showcase of a “gameplay trailer” in the entire show. I would still consider it as more of a music video, but it was better than most of tge other things that we got. No exaggerated BS, just plain old gameplay footage portraying the game’s vibrant art style and frantic platformer based gameplay.

The Gunk looked like another interesting game. Coming from the makers of the Steaworld games (especially Steamworld Dig), The Gunk feels felt like a 3D Metroidvania (Unconfirmed) set in a world where a black goo corruption is spreading. It will be up to the players to find out the mysteries of corruption as they explore the world and uncover its secrets.

All in all, it’s quite embarrassing when third parties had better content to show than Microsoft themselves. But again, company head Phil Spencer has stated in the past that they won’t be focusing on exclusives for the first couple years of the Series X so that could have something to do with it. Let’s just hope it doesn’t end poorly for Xbox. For your convenience, all the trailers are linked below.

Oh and a new Fable “cinematic” was shown.

What's your reaction?
LOL
0%
Cheers
0%
What!?
0%
Meh...
0%
Sad
0%
RAGE!
0%
Editorials
AvowedBalan WonderworldExomechaFableHalo: InfiniteHello neighbor 2Ori & The Will of The WispPCTell Me WhyXbox One
Avowed, Balan Wonderworld, Exomecha, Fable, Halo: Infinite, Hello neighbor 2, Ori & The Will of The Wisp, PC, Tell Me Why, Xbox One
About the Author
Pratyush