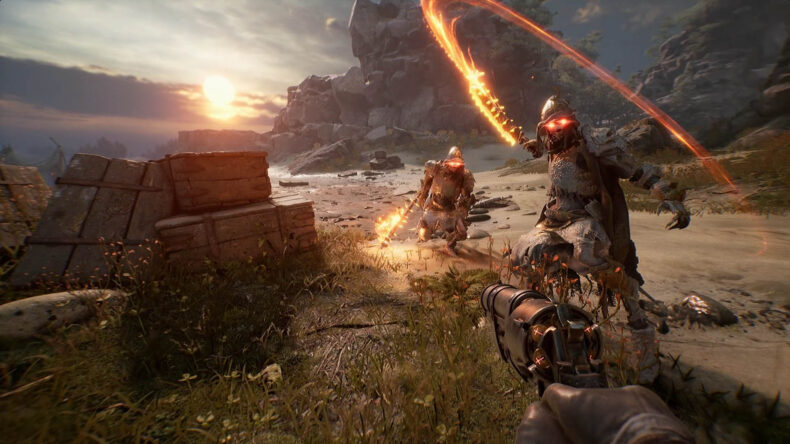 Information drip on The Astronaut’s fantasy horror shooter has been a slow burn. First introduced to us through a spooky trailer 2 years ago, people were almost instantly invested in Witchfire due to the pedigree of the developers consisting of industry veterans with titles like The Vanishing of Ethan Carter and Painkiller in their resume. Following a controversy regarding “looter shooter” elements that spawned around 4 blog posts from the developer as a response, we have had a really slow slew of updates. In their latest blog post by director Adrian Chmielarz, we have gotten an update after 3 months on how they have been coping in a post-COVID era.

Detailing the workflow, Adrian goes into how they were balancing the development between implementing gameplay systems and having a demo ready, quoting the journey as a “story of happiness” and “a warning and a lesson”.

The basic idea is that the team had been on-and-off, seeing what works and what doesn’t. While the core system was in place they felt as if a crucial element of fun, something that would make anyone who picked up the game during those brief moments go “aha!”, was missing. Their unending pursuit to get all core systems in place for a fully synergetic environment finally paid off; after being hard at work for a couple of weeks, they finally figured out the perfect pacing and rhythm to the game – or at least as much as a brief presentable demo would allow.

Happy with the results, they aimed their sights towards the next milestone – a bigger, bolder chunk of gameplay that exudes the same confidence and polish as they managed to achieve before. Sadly, this is one of those moments where the harsh realities of game dev set in: Things may not seem as easy as they are at first glance. That coupled with the ongoing COVID-19 pandemic threw the studio into chaos. Thankfully they seem to be back on track as the team adjusts to WFH (work from home) practice; they’ll be setting a tight work schedule, cracking their knuckles and hunching over in concentration to give the project the attention it needs to shine the best.

The next stop for the studio is not just crafting a hefty showcase of brand new gameplay, but also including what they deem as unorthodox gameplay elements; a bold plan for sure and the devs seem to have some backup tricks up their sleeve, lest the minecart tumbles off the track unexpectedly. Answering the Question of the week, Adrian adds in that less updates means that they are busy working on the game – a good thing indeed.

That being said, Witchfire is certainly looking to be one of the more unique FPS games this gen. In the modern world of constant updates, it’s important to believe in waiting for the final product. Not one to cause an uproar over incremental development changes, I know that developers don’t want to create an unintuitive game that will deviate from their core vision. Witchfire is looking good and I am definitely anticipating its release. Hopefully, the release date is sooner than later.

What's your reaction?
LOL
0%
Cheers
50%
What!?
0%
Meh...
50%
Sad
0%
RAGE!
0%
News
The AstronautsWitchfire
The Astronauts, Witchfire
About the Author
Siddharth Patil