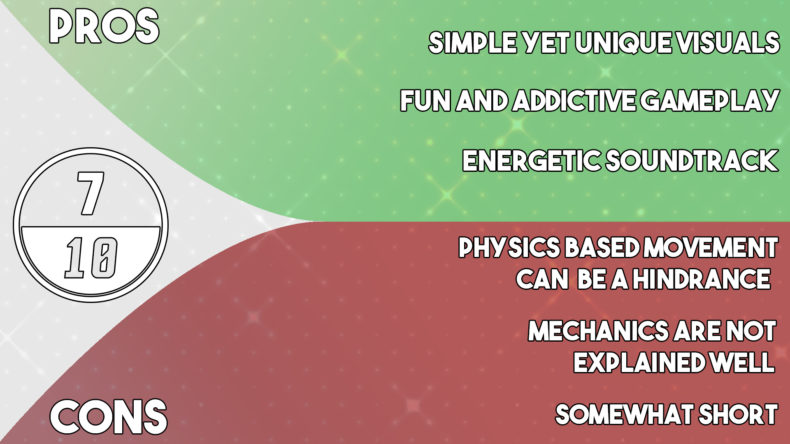 Will Glow The Wisp

It's a melee bullet hell platformer where you dash around, avoiding harm and try to reach the end goal.

Developed by Nikolas Crisci under the alias Part Time Indie, Will Glow The Wisp is a bullet hell platformer for PC and available for purchase on Steam for $8. Is this game worth your time? Let’s find out:

Well, there’s none to speak of really, it’s purely gameplay-focused. The objective of the game is to navigate the wisp through a variety of levels each with their own series of obstacles and enemies, and reach the green portal at the end. 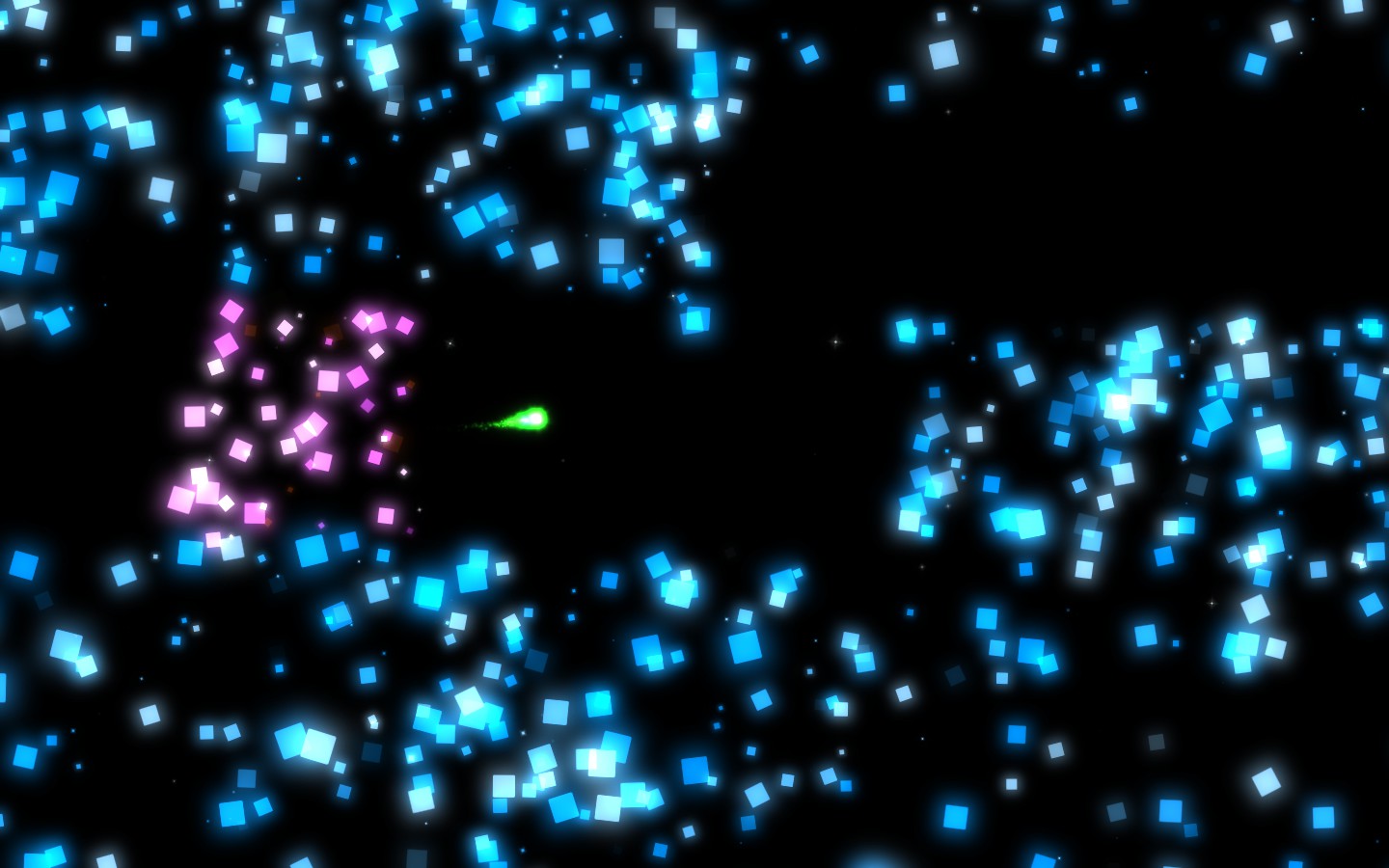 Will Glow The Wisp has a  simplistic yet aesthetically pleasing artstyle. The neon clusters of cubes glow and dim magically as you navigate the treacherous levels. While the art design remains constant throughout, there’s enough visual variety on offer with the colorful spray of bullets and particle effects.

Movement is handled via the standard WASD scheme to make the wisp hover around. There are 4 different wisps to choose from, each different from one another with regards to the following stats – acceleration, speed and handling. The yellow and blue wisps are quite speedy, while the pink one is the slowest due to having the best handling. The green one is a decent middle-ground of the two. I personally used the pink wisp for the majority of the playthrough, and to a lesser extent, the green one.

As mentioned before, this is a bullet hell (although slower paced due to the tight, corridor-like nature of the levels) and like most bullet hells, you can be hurt by everything (including the stationary blue walls). In addition to objects like spikes and moving walls of death, there are also a variety of enemies that shoot out bullets. But worry not, you have a handy dash mechanic at your disposal that can be used to maneuver around tight spots and enemy fire and is employed by holding down the left mouse button; this not just lets you aim in any direction, but also slows down time. Cool, right? This is the main appeal of the entire game, and mastering the dash is the key to success.

While the wisps do feel fairly tight to control, I must point out one aspect about the movement mechanics that may turn some people off: i.e. the physics.

Everytime you move, the wisp takes a few seconds to come to a complete halt – and this is a bigger issue when aiming as your aim is thrown off by the physics as the wisp is displaced due to momentum. This wastes a few precious seconds and this lost time could mean the difference between successfully dodging fire or running into a wall as you try to adjust your aim. Of course I got used to this minor annoyance over time but it’s still a minor blemish on an otherwise decent game formula.

The level design is mostly well done, and revolves around objectives like clearing a room of enemies before proceeding and navigating an obstacle course. There are also boosters scattered around levels that provide temporary bonuses everytime you touch them, like increasing your movement speed, slowing down time and deflecting all enemy projectiles on screen. This is a great mechanic that adds more variety to the simplistic gameplay. 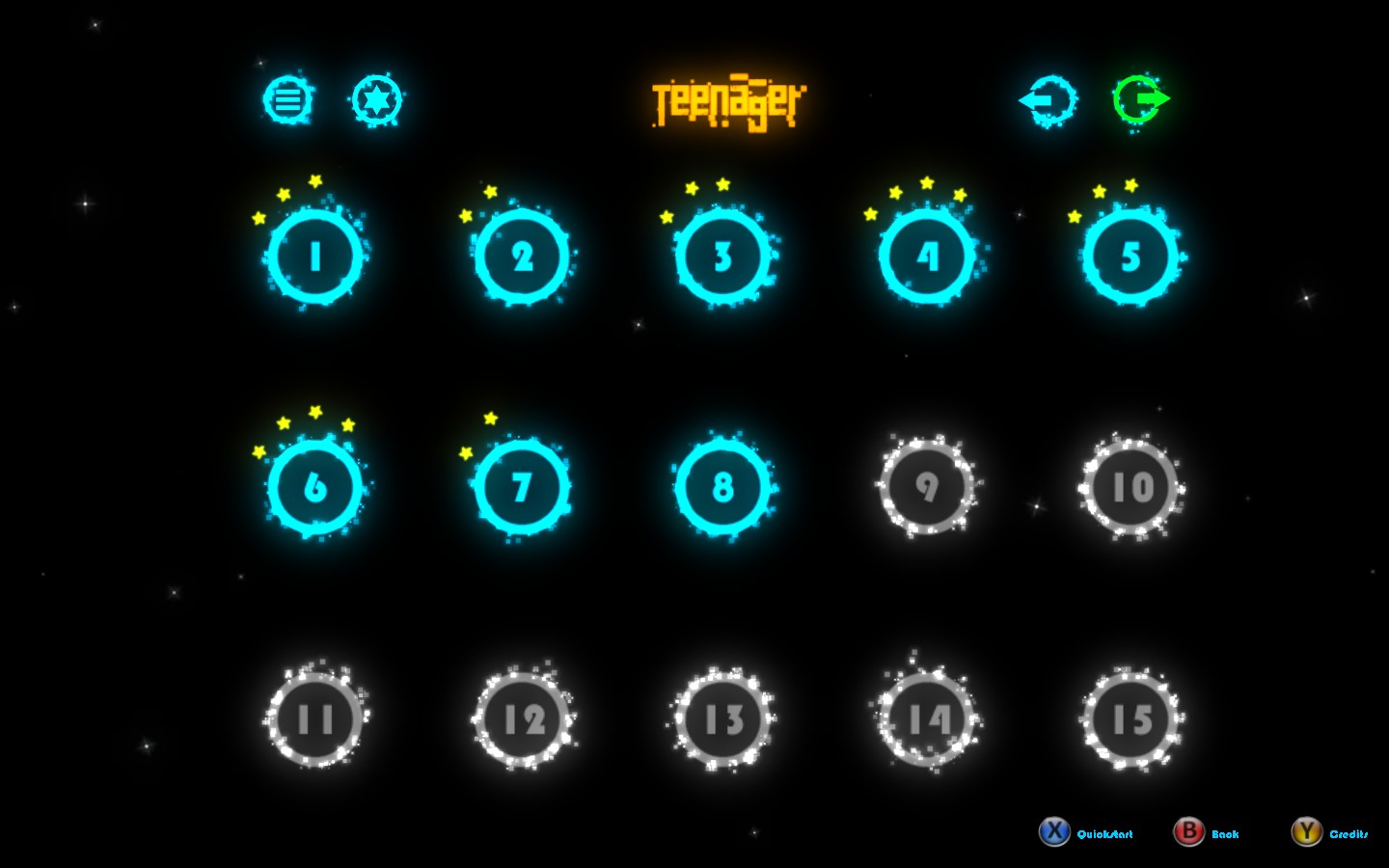 One of the four difficulty levels

Apart from the 5 demo levels, there are four different “worlds” each consecutively ramping up the difficulty – Baby, Child, Teenager and Young Adult; except Baby, all worlds have 15 levels each, with the last level being a boss fight of sorts (Baby has only 12 levels with no boss fight). This brings the total number of levels to 62; at first that may seem like a lot but not when you realize that most levels take anywhere from 5-15 seconds to complete (while bosses are a bit longer, lasting a few minutes). To remedy this, the game has a worldwide leaderboards for every level as well as a time attack-based Challenge mode where you can try beating the developer’s time record through the levels. It’s not much, but perfectionists will find a reason to spend some more time with the game.

Another area which the developer didn’t seem to give much thought to is:explanation (or lack thereof). While the entire Baby world is essentially a tutorial on how to move around and dash, the game tells you nothing about certain aspects like environmental hazards (considering certain objects are of the same color as a wisp, one could not be faulted for thinking that each wisp may be immune to certain types of hazards; that’s certainly not the case) and even the ranking system (you’re awarded out of 5 stars depending on how quickly and deathlessly you finish a level – I didn’t really understand this till I reached the final world). Again, not a deal breaker, but a minor nitpick.

This is perhaps the strongest suit of Will Glow The Wisp for me. Every sound, from the hovering wisp and dash to the chill, electronic soundtrack feel spot-on, ESPECIALLY the soundtrack which is extremely catchy, intense and upbeat.

So is Will Glow the Wisp worth a purchase? Yep definitely, especially for the unique gameplay and terrific soundtrack; but I would recommend waiting for a sale.