Why We Can’t Wait for Devil May Cry 5 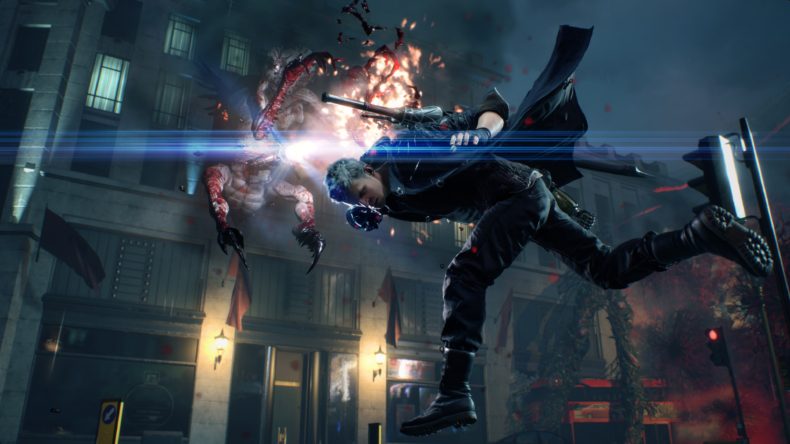 The Devil Cry 5 demonstration at Gamescom was promised to be a great one. And it very much delivered on its promise. Watching Nero bounce around, hacking and slashing enemies felt great and inspiring, and watching Dante jump back in the fray with a motorcycle that turns into TWO swords felt like catharsis. All in all, it seemed to be exactly what the fans have been begging Capcom to make for the better part of the last 10 years.

The series seems to have regained its unique ‘feel’ back as well. There are no pretentious, anti-capitalistic statements, no try-hard ‘edginess’, no ‘random sex with strippers’, no idiotic blaring EDM music, and hey look the character(s) we play as seems to be both in-your-face but playful, charming and easy-going at the same time— instead of being insufferable, aggressive douchebags. While some of the aesthetic is defintely inspired by the-game-that-must-not-be-named, the charming gothic-anime soap opera that we all know and love seems to be restored–replacing the awkward Grim N’ Gritty nonsense and ‘edginess’. Thank god.

( Somebody send the memo to Ninja Theory that making a character flip the bird to a boss isn’t how you do it.)

Jokes apart, the game looks absolutely gorgeous, and if it genuinely manages to run at 60 fps like its claimed– then it’s another technological feat for the modern console generation. The series always prided itself on being both great-looking and fast– and it seems like that trend will remain here. This would hopefully encourage more developers to push themselves to deliver high performing, great looking games. Not to mention, this game is set to act as a true test of the RE engine– after Resident Evil 7 provided a good showcase for its graphical capability. DMC 5 on the other hand has to deliver speed, visuals, performance and stability. Which it seems to be doing very well so far.

The game is also set to act as a homecoming of sorts. This will be the final chapter in the ‘Sons of Sparda’ storyline, which has been going on since well…forever. It seems like all major characters will be involved in it one way or the other ( including an iconic, fan favourite who is all but obviously in the game). It seems like a lot of lingering mysteries and fan theories will finally be resolved as Capcom and series Director Itsuno will close the curtain on an enduring legacy that has established itself as a vital part of gaming history since it first exploded on the scene in 2001.

The original Devil May Cry was a hugely influential game, that basically set a blueprint for polished, responsive combat controls in video games at the time—especially when games moved from the ultra-blocky 5th gen to the more polished 6th generation. It not only created the ‘character action’ sub-genre, but influenced third person combat at large in general in video games. Despite a dull sequel, the series managed to hit its pinnacle in the third installment, and was able to cross over brilliantly to the HD era (despite some hiccups) with Devil May Cry 4.

Devil May Cry 5 seems like it has learned from the entire series’ history, and how the action genre has evolved in general. So far, it seems like it is all primed to deliver the boundless variety and creativity, polished and deep combat, memorable story and characters, impressive challenge and replayability and non-stop iconic moments. Ones that seem all set to delight both returning series veterans and a new generation of gamers all over again. These are all qualities that made the franchise an instant classic to begin with, and it’s good to see them back again.