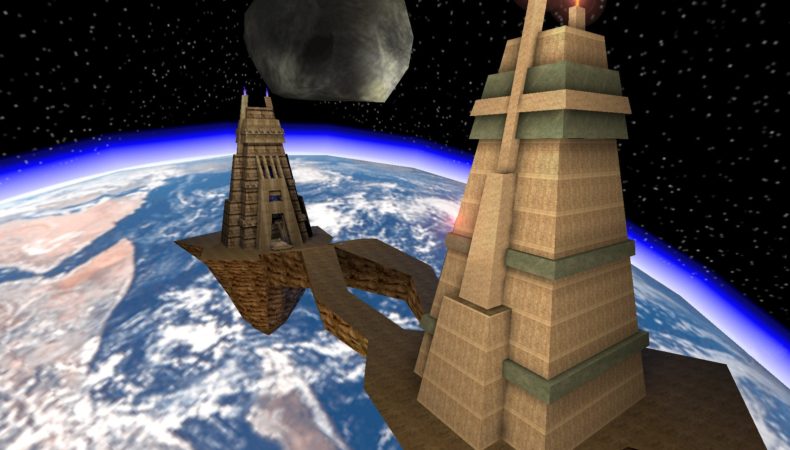 Between our circle we often talk about the healthy multiplayer competitive scene of the late 90’s. It was very competitive and aggressive, but it wasn’t nearly as overstuffed, populated and toxic as it is now. ID Software birthed the modern first person shooter with WOLFENSTEIN, inspiring a legion of instant devotees. A year after its release came DOOM, which instantly perfected the genre and introduced modern multiplayer gaming. This inspired an entire generation of passionate gamers to finally take the plunge (and shell out the money, of course. It sure as hell wasn’t cheap) and begin the process of testing their mettle against each other.

By the time its sequel rolled around, and a few years later QUAKE was released, ID had already carved an epitaph in the gaming landscape that would never be erased. The house that Romero and Carmack built had taken on the world and won. Seemingly, created a perfect product that there was no substitute for. Sure, there were a flood of clones that hit the market (and a few of them got really popular), but none were able to recreate the sheer creative high and innovate to the level of these games. By the time QUAKE 2 rolled around, it had all but dominated the multiplayer scene, and there was no games that could ever even hope to compete with ID’s magic formula.

Well, except one. There was UNREAL TOURNAMENT.

Developed originally as an extension of Epic games’ ahead-of-its time shooter UNREAL, it ended up taking a life of its own during development. Originally called the ‘bot pack’, the decision was made in development to transform it into its own entity. And whilst this may sound cynical and contrived , it was quite the opposite.  UNREAL TOURNAMENT is a full-on evolution of UNREAL’s concepts. It takes the basics and forms a whole new equation that transcends the surface similarities. Fundamentally altering its DNA to make a whole new organism of the same species. The original UNREAL is an often-overlooked classic (which is a topic for another day) that probably isn’t as fondly remembered as it should be, but UNREAL TOURNAMENT was instantly regarded as a masterpiece, and has managed to sustain itself. Because well, it really is that amazing.

Now I wouldn’t say that UNREAL TOURNAMENT is necessarily better than QUAKE or DOOM. But by god, is it close. In many ways, what EPIC created was inspired by ID’s work but they wrapped it around more innovation than any other first person shooter of its time, and almost any since. It took the fast paced formula and tweaked it around with so many intelligent design decisions, that make it not only not dated today, but still cutting edge even now. The game to this day, stands as a testament to the insane amount of creativity and innovation that games of that era pioneered.

No game could ever be as fast and precise as DOOM or QUAKE, but Unreal got over that problem very easily. Whilst the nature of gameplay it encouraged was still high-speed movement, it was far-more loose-cannon and experimental than both of those ID classics køb viagra. QUAKE and DOOM required you to constantly be in zen-like control of your movement and precision shooting through a rigid level to build momentum. UNREAL TOURNAMENT on the other hand, required you to master movement across whole levels. The levels were large, multi-tiered and often closing loops, with elevators, boost jumps and teleporters placed just at the right places. This made the game much more about movement and high-flying acrobatics than both those games. You weren’t just restricted in a linear plane when it came to trying to gun down your enemy. Here, you would often move around in whole loops in and around the level before till only one of you was left standing. Be it up and down elevators, through portals or multiple planes. UNREAL TOURNAMENT would require you to partake in multi-level treks across both air and ground till you started raking all those sweet, sweet killstreaks.

It also a bit less rigid with its requirements for precision shooting. The weapons were less designed to be an archetype, and geared towards creative usage. The returning weapons from UNREAL were tweaked from their original incarantion. Now they were even more punchy and responsive. Put it simply, UNREAL TOURNAMENT had some of the best weapons in any game ever. The ‘Flak Cannon’, ‘Shock Rifle’, ‘Enforcer’ and ‘Redeemer’ need no introduction. Not only was the weapon handling perfect, there were also alternate firing modes for each. The addition of a weapon called ‘The Translocator’, which allowed you to transport to different areas around you, further sweetened the deal.These were all designed to accommodate the experimental movement style. Players would often scramble between their available weapons as they dodged, wall jumped, double jumped and in some occasions, performed the infamous ‘rocket jump’.The weapons selection in UNREAL TOURNAMENT was so ahead of the curve, it’s hard to imagine that anyone could think all of this back in 1999.

Then there were the maps. Boy were they something else. Each and every map was a veritable toy box that was drastically different from each other. Some would offer insane verticality, some would be maze-like and some would offer ridiculous gravitational boosts. Some like the ‘CTF-Two worlds’ have become an icon in the multiplayer world, due to their simple execution of such a brilliant idea. The multiplayer modes also were fantastic and enhanced by the stellar map design. The words Deathmatch, Team Deathmatch, Capture the flag etc. took on a whole different context and meaning, when you put them in UT’s zig-zaggy gameplay loops, and completely mental maps. Playing the game was a mad rush that almost always led to off-the-wall improvisation. It required quick reflexes, weapon switching, constantly switching position and using aoe/splash damage often just to come out on the other end. Such a thing felt completely unique from Quake’s extreme linear structure and that’s what helped set it apart, and set such a foothold.

Then of course, there was the soundtrack. UNREAL lacked the heavy metal/ satanic aesthetic of ID’s game. It settled on a moody, ambient, electronic score by genius composer Alexander Brandon. Each and every track is an absolute masterpiece and provides the alien-seeming levels with their atmospheric, otherworldly qualities.  It genuinely gives the whole cosmic vibe of the game that extra push. All this music seems ingrained in the soul of each and every outstanding level, to the point that any fan would be recreate the entire map in his/her entire head when they hear the music. From the moment on the tutorial starts with ‘Run’ playing in the background, the music makes its presence felt in seconds. Almost every classic UNREAL TOURNAMENT map is associated with a kick-ass track to this day. These tracks are so iconic, they are recycled/remixed on a regular basis. And to be honest, are a part of our daily playlists till this day.

The original UNREAL was a stunning debut for the graphical capabilities of the UNREAL engine, and introducing it to mainstream popular culture. Against all odds though, UNREAL TOURNAMENT pushed it even further. It looks even better than UNREAL, and was one of the technological highlights of the PC gaming era at that time. It was able to successfully translate the alien, otherworldly, surreal vibe that helped put UNREAL apart from other single-player shooters, and apply it to multiplayer gaming. Epic games ( then ‘Epic Megagames’) was able to apply what they learnt in single- player and then tweak it to multiplayer. UNREAL TOURNAMENT was by far the best looking shooter at the time of its release, and whilst the visuals are dated now, it still retains it’s atmosphere. The game still feels great.

The learning curve was also smoother than ID’s games. Whilst mastering the maps would of course take a lifetime, there was a great single-player mode that gradually eased you into the curve. You would slowly learn to compete with excellent bot AI (that had multiple skill levels). If you didn’t feel like competing online, you could select any map in the game and spend hours playing with superbly designed Bot AI in any mode. Hell, you could even adjust the game speed and the air speed. The amount of detail that was housed in this single piece of software was just well….Unreal.

This brings us to the final piece of the puzzle: content. This is an area where UNREAL TOURNAMENT not only trounced QUAKE 3 (It’s then nearest competitor), but almost every other title that is out today (or ever). The game had single-player (with bots), fully featured multiplayer with 30+ maps, and most importantly: community tools. That’s right. It may be sacrilege nowadays, but Epic Games actually released the source for Unreal along with the game, allowing people to form their own maps and play around in the sandboxes of their dreams. This was a major milestone at the time, and was instrumental in building a community around the game. Epic Games have always prided themselves in making games that deliver value to the players first and foremost, and to this day this game stands as a benchmark for that practice. There simple is no other shooter around till this day, that gives players so much bang for their buck. If anything, this makes it infinitely replayable.

All these aspects make the original UNREAL TOURNAMENT stand out till this day. Both the insane high it gives off, and the incredible level of immersion it was able to deliver the player in regular basis made it a standout title both in its era, and now.  People jaded by the mediocre state of modern fps’s recently, ought to fire it up. They’ll feel instantly transported to a place that they’ll never want to leave from . The later games in the series were great, but gradually lost the unique appeal of the original title. While the weaponry got better with time, the slowed down the pace, and changed the overall aesthetic and vibe to something more generic. They are still good games, but just do not give you the rush that the original does.

I’m sure Epic knows this, as the new, upcoming version of UNREAL TOURNAMENT is being developed with the help of the community itself. Making it a reverse-engineered version of the original and its popularity. Things have a habit of coming back in cycles, and there is great hope that this once titan of the multiplayer fps genre will go back to ruling its lands again. Let the tournament begin.