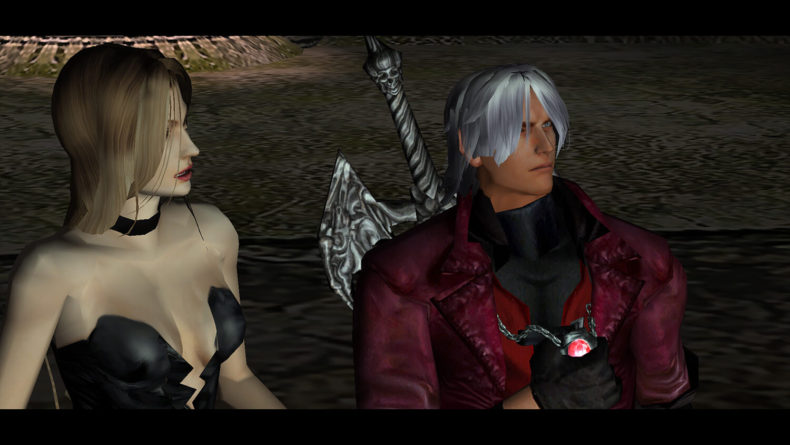 The Devil May Cry series is slowly but surely gaining its way back into the spotlight. Ever since its initial showing of Devil May Cry 5 at E3  – it’s gone from strength to strength – with a series of well-received trailers that are bringing both old fans into the fray, and winning over new ones in the process. While all of this is exciting, it is perhaps another reason to go a bit further back in time and revisit the first game in the series. One which was responsible for birthing the entire ‘character action’ sub genre, influencing combat in third person games overall, and to be frank, being an incredibly memorable action masterpiece on its own.

While its successors have definitely become more famous over time, the original Devil May Cry was, and still is, an instant classic. While some elements have become archaic, and others have been bettered by the games that followed— there are some things that it just does better than each of those games—even to this day.

Firstly, there is no doubt that Devil May Cry has the best level design and atmosphere in the entire series. The game has a lot more exploration than both 3 and 4, with the game making you explore the ins and outs of the castle in mallet island. The art style and mood gently creeps up on you, and is more akin to the gothic aesthetic of a Castlevania game (something that has been explicitly stated by game director Hideki Kamiya himself). All the resident evil- style fixed camera angles make sense, as they provide a sense of cinematic flair to all the large amount of walking and jumping around – and more credence to how it was originally supposed to be a resident evil game. All in all, the sense of world building and familiarity is exquisite.

The combat also still holds its own. The game is much more grounded than its successors, and focuses on quickly dispatching the hard-hitting, fast-moving enemies with a variety of attacks before they make mincemeat out of you. It’s still the weightiest, most hard hitting fighting engine of the series – making each blow and dodge much more important than the other games – something that both 3 and 4 abandoned in favour of more freeform combat and acrobatics. Almost every attack from every weapon feels much more pronounced that it does in other games of the series and while the enemies are smaller in numbers, they are much,much harder than they are in 3 and 4. They move faster, hit harder and generally force the player to make on-the-fly decisions on how to dispatch them – and force him/her to use all the tools in the arsenal to win. This sort of makes it a precursor to games like Dark Souls – which also adopted the philosophy of making every moment matter in combat—in further immersing the player.

The Devil May Cry series has a universally excellent reputation for epic boss encounters – and sure enough, the foundation was laid from the first game itself – with plenty of epic boss fights. While the bosses are fought multiple times (once again, limited assets), Capcom is far from lazy in this regard. They often switch the nature of boss fights completely and you are put under different fight scenarios when taking them on. One minute you may be fighting the Griffon on a ghost ship—the other you may be taking it on on a large arena. Same thing? Sure, but feels completely different. Not to mention the epic three encounters against Nelo Angelo that dramatically ramp up in both difficulty and atmosphere. Usually, you face each boss at least three times –but the amped up circumstances give the player a great sense of progression and achievement.

Speaking of those two, Devil May Cry has them in spades. As is common knowledge, the game is a stiff challenge—that while not overtly taxing by any means—still makes the player work for his wins. The stylish cut scenes and story beats fill the gap in between, making the game much more immersive. While Devil May Cry does not have the production values and cinematic excess that Devil May Cry 3 had, it still manages to tell a charming, goofy, earnest (and sometimes) cringe story with an instantly iconic lead protagonist.

Speaking of which, he indeed is the biggest gift that the game gives players. Dante endeared himself to a whole generation of gamers because of his positive qualities. He was brash and cocky without being aggressive and in-your-face, dressed well and carried himself with confidence, enigmatic yet approachable—and had a large amount of loyalty, nobility and care for his fellow man. In short, he was genuinely cool. The sort of guy most people would always want to hang out with. There were hints of a painful, difficult past that made him the way he is (explored with more detail in Devil May Cry 3), but all things considered—he just seemed like a great guy in general. Which is what everyone wants to be.

Devil May Cry was hailed as a groundbreaking game on release – and rightfully so. It’s tight, precise, mechanical combat, great atmosphere and setting, memorable and creative encounters and a large sense of personality made it a standout title during the PS2’s early days. Some minor blemishes aside, all these qualities remain mostly intact almost 17 years later –waiting to be discovered by those who remain in the inclination to do so.

We also recapped Devil May Cry 3 a while ago. Check it out here.