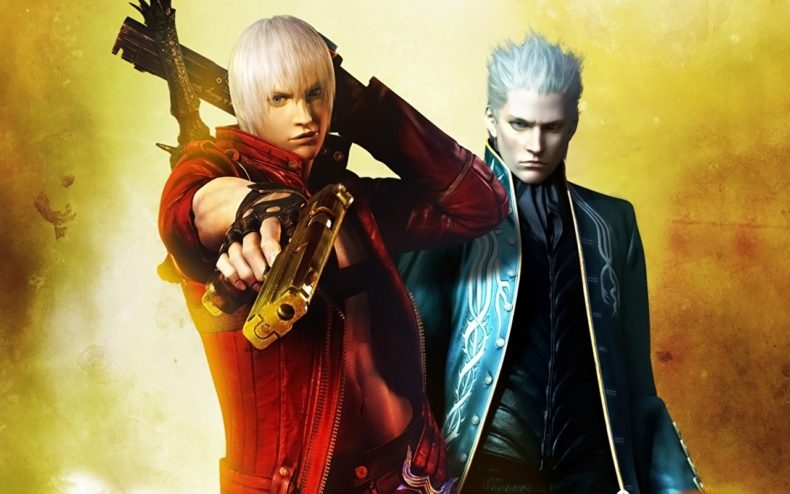 Most everyone who owned a PS2 during its heyday, has fond memories of Devil May Cry 3. A game that has acquired all but mythical status since its release, is now considered one of the cornerstones of the character action/ hack and slash genre, and one of the defining titles of Sony’s sixth generation juggernaut. The game has since then, of course moved past its initial platform onto others and has enjoyed a vaunted reputation as a generational classic, and one of the last few truly great titles that Capcom ever put out. (As proven by the constant Resident Evil 4– level milking that the once respected developer/publisher keeps subjecting it to)

Whilst it’s reputation is fully deserved, it also has a bit of historical notoriety that a lot of people seem to disregard .You see, the version of DMC 3 that is most popular currently is the Special Edition. With Vergil as an additional playable character, and a re-balanced (but still steep) difficulty curve. The one that has been relegated to the  unspoken corners of history, is the original version: with no Vergil, no in-built continue system, a higher difficulty by default, among  other things. People who bought the original Devil May Cry 3, perhaps still have battle scars lodged in their brain. This was a title Capcom put into market, it seems to deliberately punish internet commentators who constantly whined about Devil May Cry 2 being too easy. While that endeavor made sense, it can also be argued that in their quest, Capcom took it too far and almost broke a truly exceptional game as a result. Almost everyone probably spent hours trying to beat the first (or second level), before realizing the only way to do so was to: 1) Switch the difficulty to ‘Easy’ (which was actually the default ‘Normal’ one in hiding) and 2) Keep on replaying to grind for more red orbs, eventually getting stronger, newer moves. Only then was it possible.

The pattern would follow the rest of the game, where the player would need to adequately prepare for each chapter( for the most part), in order to make it alive. Aside from the newer moves, the player would need to hoard green and purple ‘Vital Stars’, Yellow orbs (aka continues) and Gold Orbs (Instant revival) in order to get past exceedingly insane challenges that the game threw at you.Those who cut their teeth on the original version of the game probably have since then formed a clandestine cult in some strange corner of the globe, where they meet each week to gloat about their achievements. To be frank, they kind of deserve it too. With all that being said, the Special Edition is the way to play the game now. As mentioned before, it has Vergil playable, mid level continues, re balanced difficulty,  (Don’t worry, it’s still pretty hard), and the Bloody Palace mode. Don’t worry even if you’re an insufferable ‘purist’, you can play the game like its original iteration as well, by selecting the ‘yellow’ mode and starting on the hard difficulty.

Still, be it the original or Special Edition, it’s hard to argue what an incredible game Devil May Cry 3 is. Most games are lucky if they nail one or two aspects with complete conviction, yet this one nails all of them. Not only does it revive the Devil May Cry franchise from total obsolescence after the dismal,dull Devil May Cry 2, it revamps the pioneering combat system in the original and builds it to stratospheric heights. In fact, the combat system of Devil May Cry 3 is probably the deepest ,most rewarding in any game ever and rewards the player in dizzying,  . Between all the weapons, styles, unlockable moves, upgrades , there really is no limit to how good you can get. The combo possibilities seem endless, and there are numerous ways in which you can get your combo meter to SSS rank in seconds. In fact, the game not so subtly encourages you to beef up your  Dante/Vergil to their best possible shape, and go for the S-rank in missions, as well as tackle the hardest difficulties. While it’s a steep learning curve and the player starts off weak, the more you play, the more the game rewards you in both improved reflexes, and a constant stream of new moves and weapons. Thanks to the sheer depth, and how much you can learn, absolutely everything seems possible.

Whilst the puzzling, platforming elements of Devil May Cry 3 are notably weak and not all that important, the intense close quarters combat coupled with the seemingly limitless combo potential (and the suitably grunge/industrial temp track) keeps things incredibly intense from start to finish. The game constantly throws you in one dire situation after the next where you have to take down multiple fast-moving, hard-hitting, extremely intelligent enemies that often are as agile as Dante himself. This creates a high amount of ‘either kill or be killed first’ tension throughout the game where the player has to find ways to dispatch a room full of dangerous foes, as fast as possible lest he/ she sees the game over screen pop up.

Speaking of intelligent enemies, without a doubt the most formidable aspect of the game are it’s many boss fights. It has to be said that  Capcom truly delivered on this front. These are no pushovers and by far the hardest in the series. Whilst they have patterns of course, figuring it out is a bit harder than the previous games in the series. Often, they will also switch patterns here and there to fool the player (Cerberus, I’m looking at you) and it’s not always obvious what the best method to defeat them is. A lot of them are also extremely Agile and move as fast as Dante himself, providing a real test of your reflexes at all time. Stupid mistakes are punished almost instantly and the player will have to learn their patterns, and figure out which weapons/ style best suits their way of playing in order to defeat them. Still, difficulty aside, they are extremely varied, creative and enjoyable to fight. They can also be taken down in multiple ways, once you acquire new moves and weapons. From the icy death that Cerebrus brings you, to the 2-on-1 fight against Agni and Rudra that taxes all your skills and energy, to the absurd camp that Nevan presents, these bosses all have a lot of charm and personality that makes them instantly memorable in the players eyes. Not to mention, the three epic central showdowns against Vergil that set standards of capturing the feverish, relentless intensity of two equally omnipotent god-like beings going at each other.

The best thing about Devil May Cry 3 however (and the reason why it’s so beloved) has to be the story, and the way progression is laid out. All the game’s four central characters (Dante, Vergil, Lady, Arkham) are well- laid out and have an in-built arc within the plot. All of them have separate motivations that often come to conflict with each other throughout the game’s duration, and both the plot and stakes keep on twisting and turning throughout the duration. Each character has secondary motivations/ hidden agendas that reveal over time and they experience growth throughout. The game especially handles the arc of Dante, giving him depth and texture. How he grows from an immature, self-centered jackass to a responsible, determined person trying to salvage what’s left of his family is commendable. The best character in the game though, is no doubt Vergil. Initially, portrayed as a cold-hearted, hyper calculating villain, who lusts for power, you find out that his determination is there for a reason, i.e to bring a more fair balance to the world in which he sees fit. Clearly, both brothers have been through childhood trauma, and the tension between them is palpable. The final showdown (and somewhat bittersweet ending) has genuine emotional weight and poignancy, because of this said dynamic. All in all, much kudos to Capcom for pulling it off so well apotekerendk.com.

Devil May Cry 3 is one of the most fondly-remembered Capcom titles to this day, and alongside Resident Evil 4, represents its creative/ artistic peak. It was followed up by the also excellent Devil May Cry 4, that expanded on its’ concepts and themes respectably, but was overall not up to it’s level. Sadly, the abysmal, unnecessary reboot DmC: Devil May Cry and its failure put the series in a state of limbo, in which it’s been ever since. A  series revival has long been fan-requested and rumored, and if Devil May Cry 5 (or whatever it’s called)  ever comes to being realized, we can only hope it captures some of the ‘lightning in the bottle’ magic like this game did.