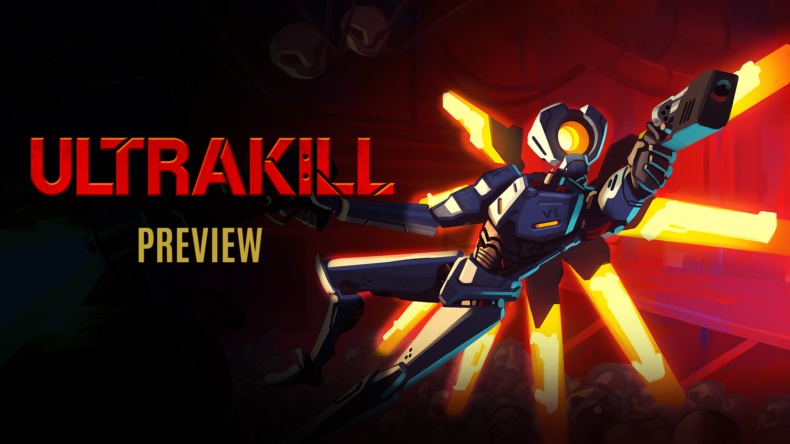 Ultrakill is hands down one of the most fun action games I have played in a while. I don’t remember the last time I spent 15 hours on a game that has content that is barely 3-4 hours long. It is brutal, it is extremely fast-paced, it is visceral and it is all the things I have ever wanted in an FPS game.

Mankind is dead.
Blood is fuel.
Hell is full.

This is how the game introduces itself.

Preceding the amazingly fast and brutal gameplay, is a short ‘serene’ intro that teaches you the basic traversal mechanics of the game. Don’t worry, this isn’t a walking segment where you have to carry a log of wood on your shoulder for a quarter of an hour. Assuming control of V1, the player character, Ultrakill immediately introduces you to the various movement mechanics: wall jumps, the infinite slide, and the dash which can be chained together for insane boosts to movement.

The game’s aesthetic is personified by a 90’s visual style, harkening back to old 3D shooters of yore – particularly Quake 2. The low poly, low res environments, models and effects all have a somewhat modern taste despite their humble inspiration.  The core level design is more or less boxed in, if not linear, nudging the player steadily from point A to B; from one room to another, sometimes you’d face off waves of enemies, other times you’ll be solving simple puzzles to progress. No convoluted, time-wasting bullshit here, just like its inspirations.

Yep, in fact, the core design philosophy of Ultrakill takes after two action classics – Doom and Devil May Cry. To say that it combines them both seamlessly while retaining the essence of each would be an understatement. It features the hyper-fast movement of Doom while also demanding precise dexterity to pull off combos like DMC.

The first weapon you get in this retro-inspired shooter is a pistol. ‘Pretty basic’, one would think. Imagine my shock when I went from “Ehhh Doom 2016 much?” to “ID Software should learn how to make pistols from the *single* guy who made this game!” when I realized that the Pistol’s alternate fire is a mini-railgun. A weapon that makes short work of enemies that line up for THE perfect shot.

I mean look at poor Doomslayer – getting handed a weak-ass pistol to start the 2016 reboot. When you think about it further, the first shotgun in Doom wasn’t of any use once the Slayer was decked with any (or all) of the other weapons. In contrast, Ultrakill’s shotgun has the impact of an airplane fitted with the engine of a rocket ship. It might look unimpressive/simple at first, but once you start using the full breadth of its abilities, it absolutely obliterates almost anything in your face.

A style meter to the right of the screen always reminds you of how well or how bad you are playing. It nudges you subconsciously to spice up your play style when you are graded B’s and C’s. To be really clear, the combo system is still sort of archaic. As long as you are able to pull off huge damage numbers per second, it will take you to “Ultrakill” within a matter of moments. I am not complaining though, seeing that sweet sweet “Ultrakill” is always satisfying. 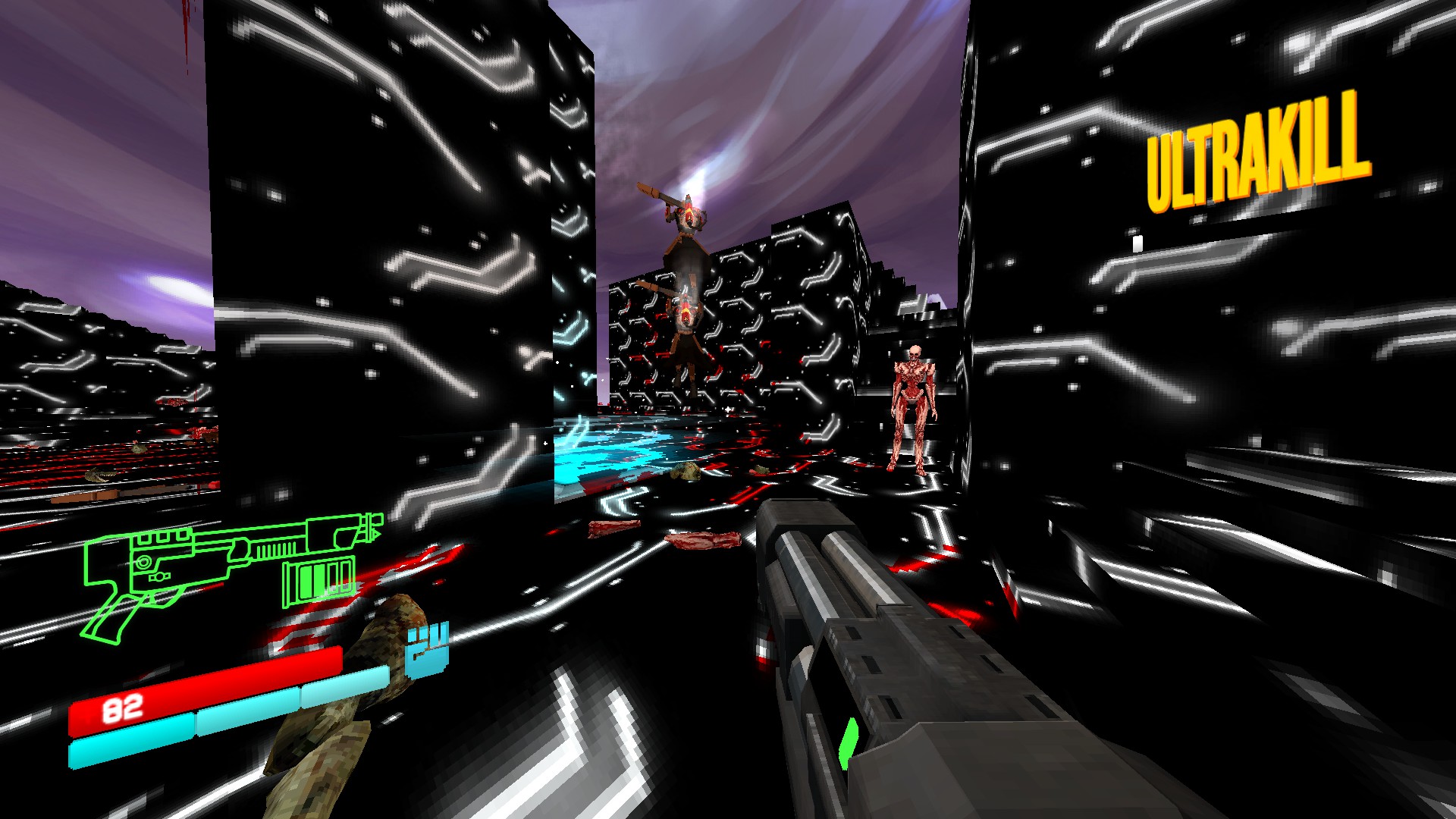 From Doom, it pulls off the “push forward” combat philosophy with ease and in fact, I would say Ulktrakill does it better. Here, health is refilled by bathing in the blood of enemies. Any blood that is splattered via violence on a living breathing enemy restores health. This encourages players to get into the face of enemies more so than Doom where glory killing was the main incentive to refill health. The lack of glory kills allows players to stay immersed. To be fair, glory kills weren’t immersion breaking, but they did halt the flow of the combat somewhat.

As for what it takes from DMC, the depth in combat is definitely something that Ultrakill translates very smoothly into the first person perspective. It instills the same feeling of awe that DMC (Not the reboot) did with how much Dante could do at any given moment. Ultrakill has some fresh mechanics of its own that give the game a nice twist. For instance, an alternate fire mode for the pistol is the “Coin Toss”. Essentially, V1 flips a coin in the air and if the coin is shot at before it hits the ground, the bullet ricochets to the nearest enemy’s weak spot, and the weak spot might not necessarily be the head in every case. The coin flip can also be combined with the rail gun in case the enemy is out viewing angle or if an opponent is too fast to manually aim at. The possibilities are endless.

From parrying enemy attacks to being able to punch shotgun bullets from your own gun, discovering the plethora of the not-so-apparent mechanics has this cathartic effect, especially when you are able to use the abilities efficiently. Through all of this, Ultrakill follows the high-risk high-reward system to a tee. I won’t spoil many of the mechanics I learnt as I played through the game because they are a wonder to discover.

Ultrakill exemplifies the combination of Doom and DMC by having a diverse set of bosses. There are the big, hulking ones like the ones from Doom with massively telegraphed attacks where players have a huge target to aim, and then there are the nimble ones that are not only hard to aim at but also hit as hard as the bigger ones. Ultrakill features two of my possibly favorite FPS bosses of all time. V2 and Gabriel are instantly memorable due to the inspiration behind them. The same goes for Corpse of King Minos and other sub-bosses that start appearing as regular enemies in the latter sections of the game.

Bosses form a part of what makes the game so enjoyable. The real fun lies in the effective and skillful use of weapons which include the – pistol, shotgun, nailgun, and the railgun. Switching between them the key to maximizing damage output. There is no ammo limitation – that means no ammo management. So it is just you, the guns, and the enemies. I can’t help but love this minimalistic, laser-focused approach. Each weapon has multiple alternate fire modes. Every weapon has a fairly straightforward alternate fire mode and another more skill-based fire mode. This creates a really good balance of options for advanced as well as beginner-level players.

Giving the player options is all well and good. However, none of it would work if the game’s level design and enemy design weren’t up to scratch. A plethora of ranged and melee enemies try to push you around. Some make a bee-line for you while some dodge your fire. The variety of enemies and tight-cornered arenas keep players on their toes. Aside from that, there are also well-hidden secrets to hunt for, which when found, activate more challenges for the player to take on. 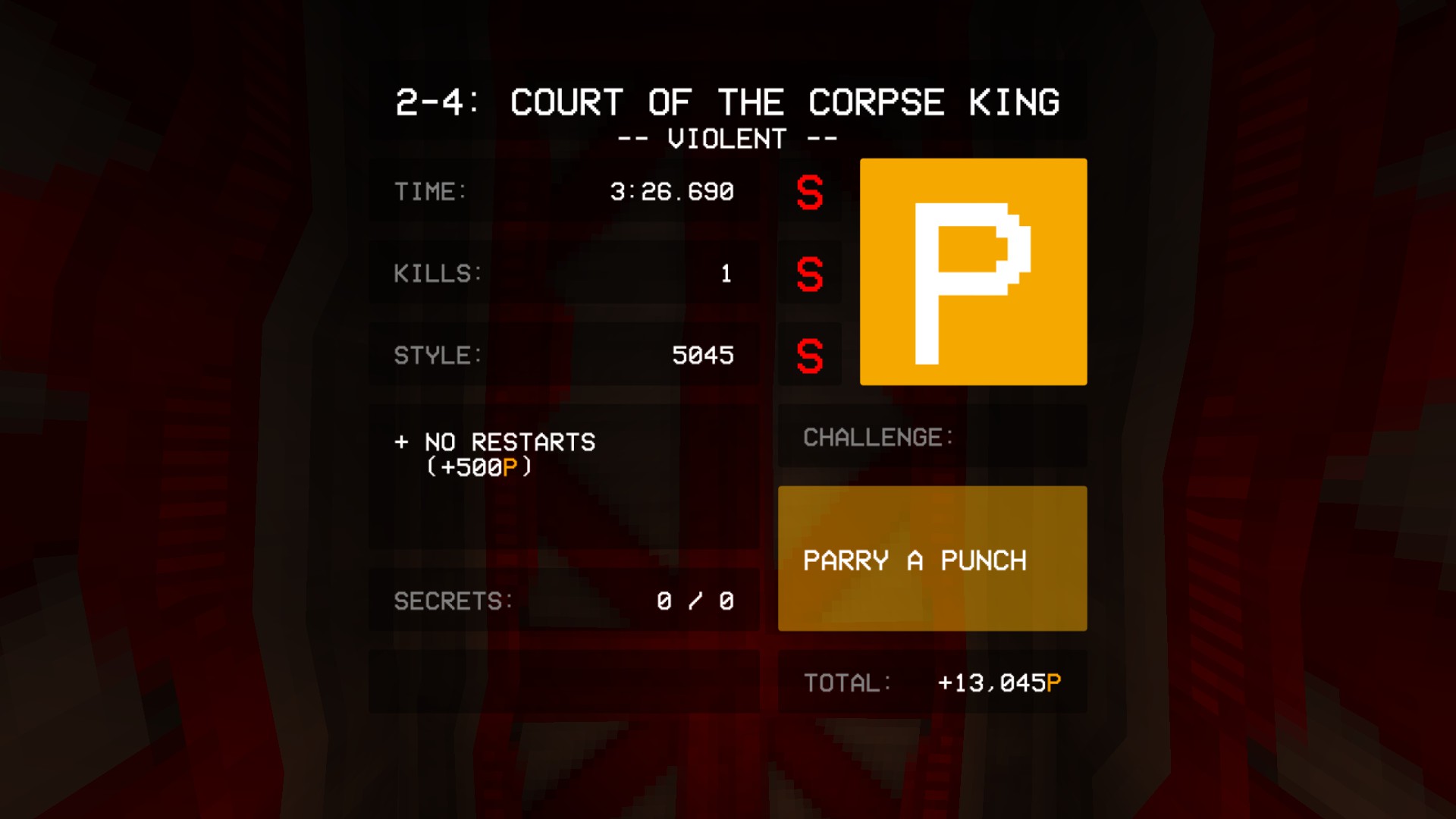 Last but not least, let’s talk about the game’s implementation of an endless arcade mode which is dubbed the Cybergrind. This is essentially Ultrakill’s “Bloody Palace” and it is extremely fun. Out of the 15 hours I have spent in the game, around half of them were spent in the Cybergrind. What differs here is the dynamic arena. After defeating each round of enemies, the arena changes, giving each encounter a sense of freshness.

Ultrakill truly is the baby of Doom (or Quake) and Devil May Cry – two of the best action games ever made. The skill ceiling is as high as you want it to be and the creative freedom that the game lets you have with violence allows you to be the best *hypothetical* first-person action movie choreographer. Yes, you can play in the most effective way of spamming the most powerful guns, avoiding direct contact and circle-strafing, but the game highly encourages you to be in the enemy’s face. Just a heads up, this strategy isn’t going to work on Cybergrind or sure. Doom Eternal was supposed to be 2020’s best FPS, but Ultrakill is definitely taking that spot for me. This is not a dig at Doom Eternal. Ultrakill is just that good.

Having completed the game on the hardest setting possible, I can already say that I am rearing to get back into it with higher difficulties and new levels when the next update rolls out.

by Zach Murphy on May 19, 2020
I spend a lot of time browsing through Steam listings for all things old, new and upcoming. I follow a bot on Twitter that updates me whenever a new steam page is created, or whenever a game goes on sale. Suffice to say, I know my storefront well. When [...]

by Zach Murphy on May 12, 2020
Of all the settings currently running amok in the new wave of retro-style shooters, Hell is one hell of a popular choice. Hell Hunt takes the demonic theme and runs with it, tossing a myriad of miscellaneous body parts along the player’s path, and popping [...]
comments
Leave a reply