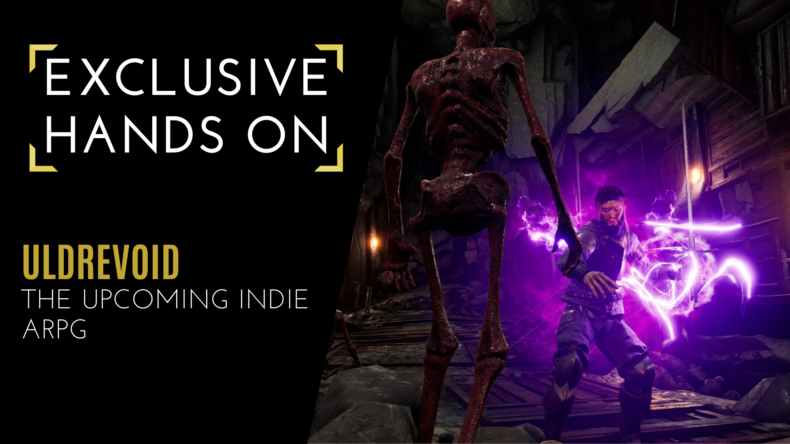 Inspired by classic Piranha Bytes titles, UldreVoid is set to be the debut project from South African indie developer Byron Dunwoody, who comes from a history of 3D modelling and graphic design. First conceived in late 2017, UldreVoid should enter Early Access on Steam sometime soon, though the exact date is still under wraps. I previously highlighted the game on another site, but now I am able to look a bit more in-depth after a hands-on experience with the playable v0.5 Alpha.

Originally scheduled for a Q1 2020 release, UldreVoid was pushed back to allow for further testing and refinements. It is unclear when it will become publicly available at this stage, but it seems to be close. Despite encountering a few bugs during my play session, the game is wholly rather polished, and I was able to get a pretty decent impression of what to expect from the completed product.

UldreVoid thrusts you into a medieval world, littered with giant spiders, walking corpses and terrifying creatures. With only yourself as company, you must fight back creatures and enemy soldiers as you discover what lies in the void, a monumental orb-like energy growth that changes the world around it. It’s up to you to discover the dark truths of the chaotic world.

As UldreVoid loads up, I find myself walking along a woodland trail, surrounded by mountainous rocks and active wildlife. Deer roam freely across my path, and it’s really all quite peaceful for a game that will soon lead to me fighting for my life against all creatures great and small with a blood-drenched cudgel. The sounds of an eerie piano accompany the tweeting of birds and rustling of grass beneath my feet and I am tasked with finding a weapon. Stumbling across a rusty axe buried in the top of a barrel, among blood-covered body parts and dead soldiers, I journey further into the wilderness, this time on a quest to find a key that will grant me access to the caverns that run between the woodland and the valleys. This is where you’ll first get to use your trusty axe, and experience UldreVoid’s fantastic combat. 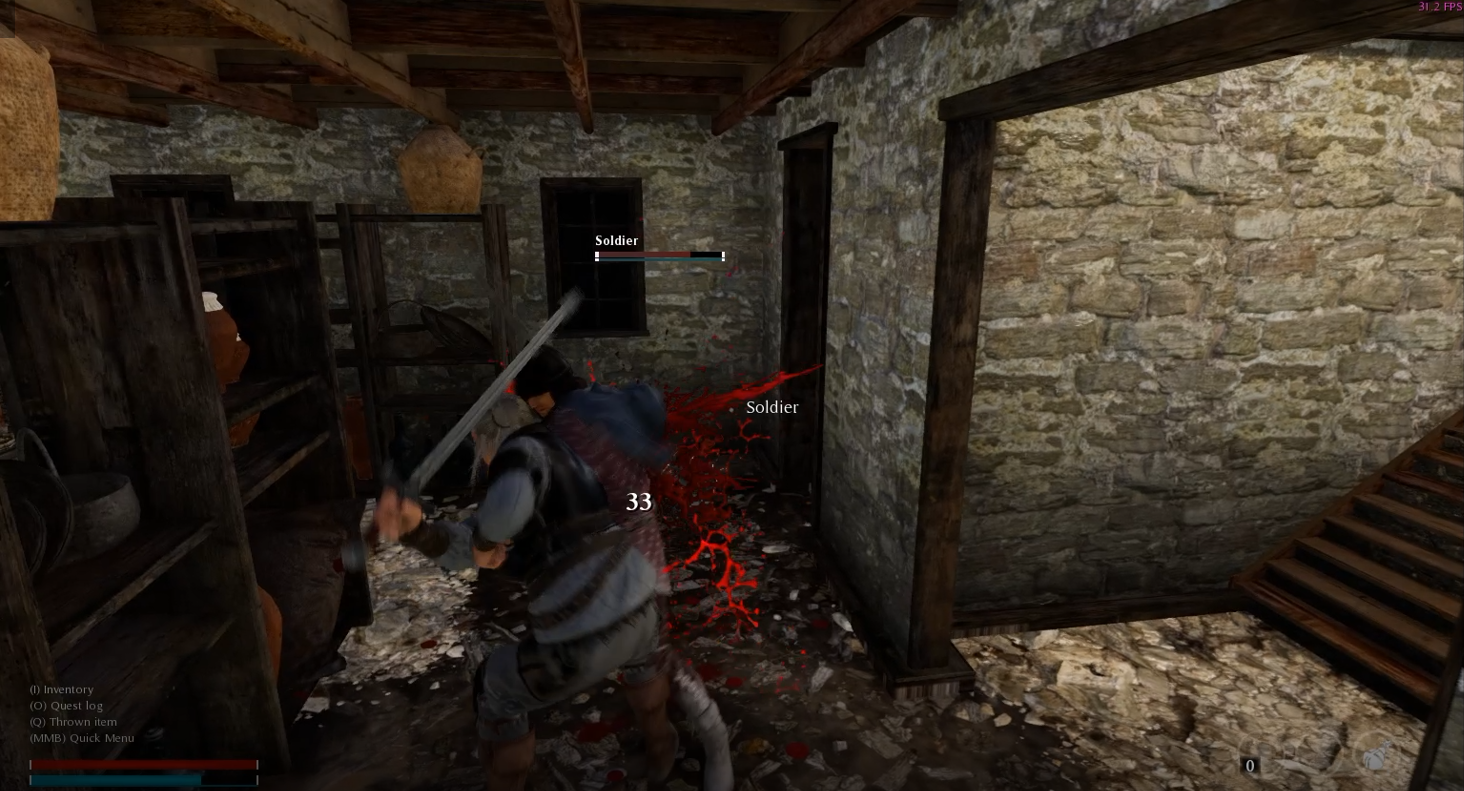 There are a few elements to the combat in UldreVoid, dodge-rolling, heavy and light attacks, and spells. You’ll need to perfect your dodging if you want to conserve health points, but it’s not completely essential – dodge-rolling is more of a tool to get you out of tough situations rather than a necessity. As I approach an abandoned run-down house, two giant cave spiders crawl out from within. A couple of heavy swings from my blade and there’s nothing left but a pile of blood and legs. The combat is brutal and incredibly satisfying, absolutely on par with some pretty great titles in the genre such as Arcania: A Gothic Tale and Untold Legends: Dark Kingdom.

After entering the caverns, the combat becomes more and more common, as enemy soldiers patrol the darkness, and they’re out for blood. It’s here that you’ll start to gather more weapons and it’s here that I start to really get a feel for the game. It’s beyond gloomy in the caves, and I never quite feel at ease. Every time I believe myself to be safe, a horde of feral rats will swarm me, or I’ll stumble upon what feels like an entire legion of soldiers.

Following the cavern segment, the game really opens up. A wide-open valley teeming with tall trees and brush. The side-quests really start to flourish here as well, with objectives to clear houses of zombies, solve a murder mystery and more. You’ll find houses full of soldiers in the valleys, and the limited movement space lends itself well to the combat. Your enemies cannot run from your sword-swings if they’re backed into a corner.

Skill points also present themselves at this stage, with a skill point being acquirable as a reward for clearing a house of soldiers. You can place it into a number of categories, including more life points, more damage and stronger spell effects. I imagine you’ll be able to become quite the force to be reckoned with after using a few of these skill points. Accompanying the skill point was a chest, containing one badass claymore which came in handy for slashing my way to the next area. 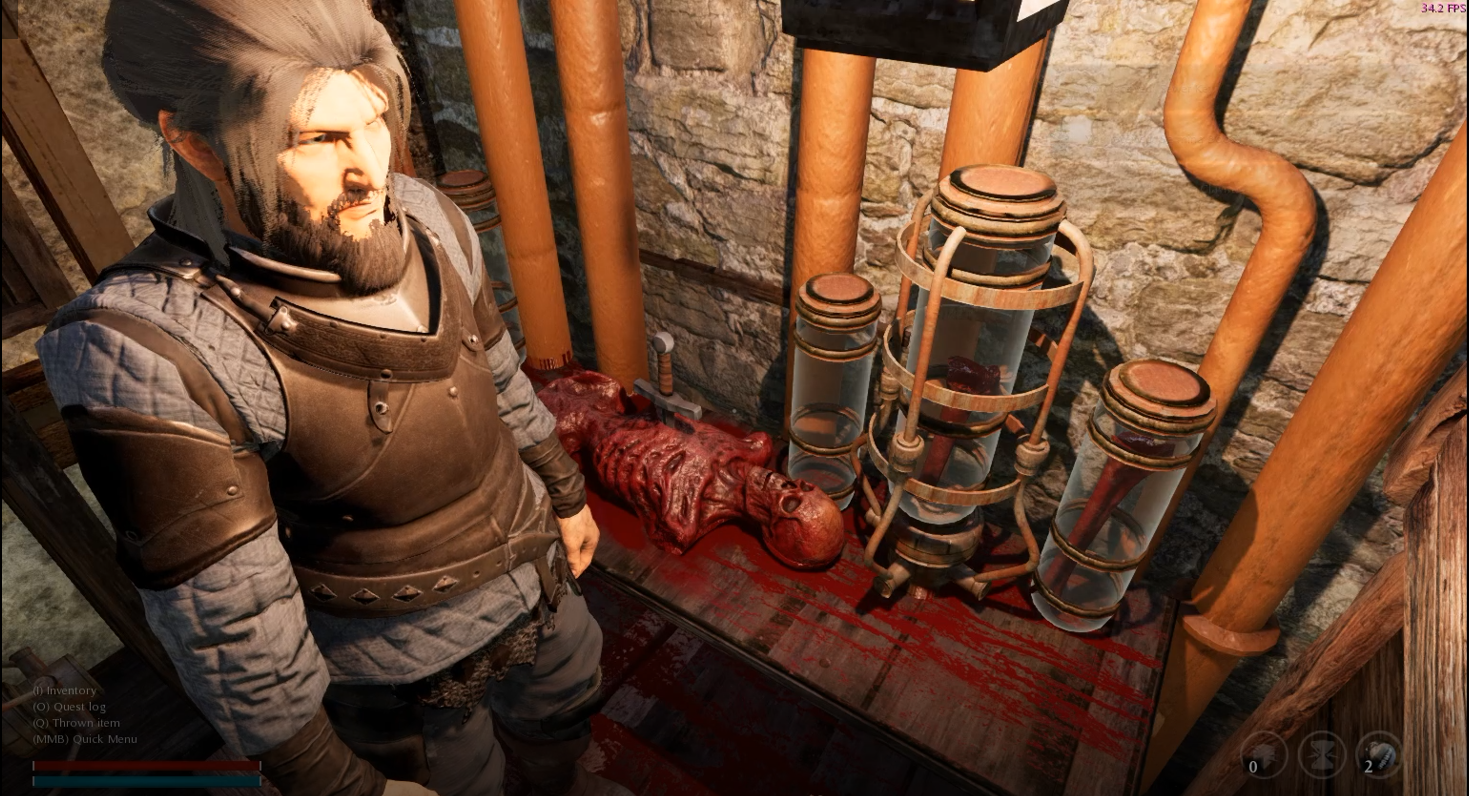 As I returned to the open valley, I encountered one of the creepiest looking enemies I have ever encountered outside of The Suffering games. Named the Scrapper, this tall, looming creature scampered towards me in a way I can only describe as urine-inducing. Tackling the beast felt intimidating and rewarding, as looting the corpse resulted in my character obtaining a couple of solid weapons.

There’s really a lot on offer here, and the 1 ½, perhaps 2 hours that I spent in the world of UldreVoid were well spent. I can see the game really blooming into somewhat of an Early Access gem on Steam, and I hope it doesn’t go undiscovered for too long. It’s obvious that Byron Dunwoody really has a talent for this genre, and I hope to see more and more of him in the industry in the years to come.

UldreVoid is already an incredibly polished experience, and I can’t wait to see as more content gets added to it post-launch. If you’re a fan of the genre, this is one to keep your eye on – and if you’ve been looking for a new combat-heavy title reminiscent of Bound by Flame, this won’t disappoint.

If you want to explore more indies, we have a whole section for it called IndiExploration.

If you’re interested in UldreVoid, you can wishlist the game on Steam.

by Pratyush on July 6, 2020
Regardless of what people might say about video games being violent, it is a form of escapism that no other visage of media can match. Especially when it comes to titles that hand you a bunch of tools of destruction and set you free upon unsuspecting [...]

by Juste Rayge on June 30, 2020
The Musou genre (or Crowd-Brawler as some prefer to call it) came out as a surprise to many of us back in the 2000s with Dynasty Warriors 2. Mixing hack & slash elements with a myriad of enemies fitting in front of the player’s eyes was a clever [...]
Comments
Leave a reply