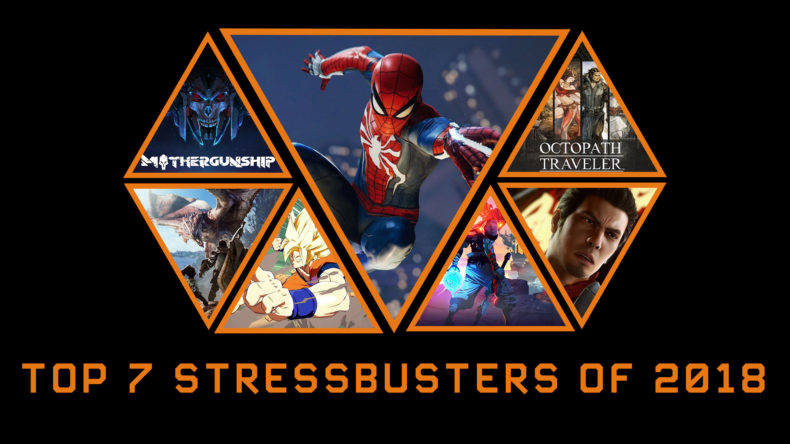 After an exhausting day toiling at college or work, it’s often not a feasible idea to crunch down on carefully crafted 70-80 hour RPGs or rage inducing, pixel-precise platformers. The following 7  “stress busters” help us ease our stress, blow off steam and let us have fun, engaging experiences that no other medium except video games can provide.

The initial launch of the game might have been marred by its RnG systems, but there is no doubt that chipping away health bars and crafting huge damage dishing, screen obscuring guns by connecting various gun parts together is extremely satisfying. The feeling is very reminiscent of Doom’s use of a shotgun. Remember how satisfying it felt to blast a super shotgun’s shell in the face of any of any random hellspawn? That is how it feels, just that, instead of a shell, you are firing rockets, railguns, chainguns and all sorts of weird weaponry down a machine’s throat. Yes, it does lack the visceral nature of Doom, but that doesn’t take away from the sheer amount of fun that is to be had – despite it being a pretty niche indie release on top of that.

Dragonball, as a fighting game franchise, had always been a bittersweet experience for me due to my lack of serious interest in the fighting genre – up until ArcSystem’s Dragonball FigheterZ came along. Not going too much into detail as to why its so good, I’ll just say this- during the Open Beta of the game on Nintendo Switch, I poured about 8 hours within 2 days of my time despite a hectic schedule. Thankfully the Switch is portable, so I did crunch in some extra gameplay time during travel.

The fast-paced fighting, the snazzy-looking combos and close adherence to the art style of the source material, all come together to form a oomph-tastic stress-busting experience for fans and weebs alike.

To no one’s surprise, this universally acclaimed rogue-like action title from French indie dev Motion Twin is one of the finest games this year to simply boot up and steamroll through if you’re in a bad mood. Seamlessly marrying a tight and incredibly fun 2D hack & slash combat system with RNG loot mechanics, it has our protagonist – a nameless blob, possessing a rotten corpse – get better the more you play the game.

Tackling the Metroidvania-ish dungeons teeming with wild monstrosities, looking for powerful weapon drops to pick up and melt enemies’ faces, collecting Cells (for character upgrades) and uncovering secrets – all of this becomes a blur of rinse and repeat as the addiction of this brilliant design hooks you in. Even death eventually stops being an annoyance as it’s usually the player’s fault for not paying attention and more importantly, it’s another reason to romp through the atmospheric levels of the game.

Dead Cells understands the makings of a good rogue-like and is an experience no gamer should miss out on, even though the genre may not be their cup of tea – stressbusting never felt better.

Monster Hunter’s reputation as a ‘challenging’ game wouldn’t ordinarily be classified as being a ‘stress buster’ but to be honest, that’s what it actually is. Coming home after a long day, and co-opnig with other friendly players was one of the biggest releasers of stress we’ve experienced this year. The endearing, whimsical vibe mixes so well with the microsystems, ecology and the addictive combat–not to mention the constant set of rewards. It’s a boundlessly replayable game, in which the grinding counts for something aside from being just there for its sake– which is, to put a smile on your face.

Yakuza 0 was the moment the series truly achieved mainstream attention, which continued throughout as Yakuza Kiwami, Yakuza 6 and finally Yakuza: Kiwami 2—which in our opinion was the best game out of the bunch. The game, which is a remake of the much storied second game in the series, takes the basic framework of that fan-favorite title and wraps it around the gloss of the Dragon Engine that was introduced in Yakuza 6. The excellent soap-operatic storyline is given a big boost due to the enhanced visuals and some of the content that was lacking in Yakuza 6, also makes a welcome return. The superbly paced storyline also makes it the more preferable option over the more beloved Yakuza 0, due to the lack of bloat and more dynamic set pieces and climaxes. It’s just so much more fun in this title to do all the side activities, explore detailed nooks and crannies of Kamurocho, play all the minigames and just hang out. This makes it just a joy, every time you switch on your PS4.

Everyone was talking about how Insomniac’s take on the webcrawler made the players “feel like Spiderman”. Personally, I was just enjoying swinging around New York, entangling bad guys in webs. Seriously, the swinging in Spiderman is so SATISFYING – all due to the right combination of impeccable animation quality and a good sense of speed and momentum. I hope it’s not just me whose primal instincts are awoken due to the meditative quality of swinging.

The combat is no slouch either; from flashy finishers to a vast array of web gadgets (although some are OP as shit), Insomniac didn’t pull any punches. Being a Spiderman fan, the story was also a huge reason as to why it acted as a stress relief. Spiderman, as a hero, has always been associated with hope and optimism Insomniac tugged at all the right strings as far as the story beats were concerned; about showing a good balance between Peter Parker’s miserable (Maybe a bit harsh?) life and Spiderman’s heroics.

With well over 60 hours just swinging around the city after completing the story mode, just casually beating up bad guys, it’s a testament to how gratifying the traversal and combat mechanics are.

My love for classic JRPG’s was well-rewarded with this outstanding Square Enix gem, that took me straight back to their games of yore. While there’s nothing groundbreaking about the game — it is, after all, a JRPG in the most traditional of senses — there’s barely a foot it steps in the wrong direction either. With a stunning art style, that is both pixel-based and polygonal (a very unique approach to 3D visuals, boasting a stunning diorama aesthetic), outstanding music, charming characters, and blissful exploration, it is a JRPG nut’s dream come true.

It’s such an exemplary piece of craftsmanship, I’ve lost dozens of hours into it and don’t regret a single second. It’s one of the few highlights in the now repeatedly-diminishing company that is Square Enix. Everytime i feel down, Octopath picks me up— eliminating all the stress, and injecting me with that special old school magic that makes me believe again.