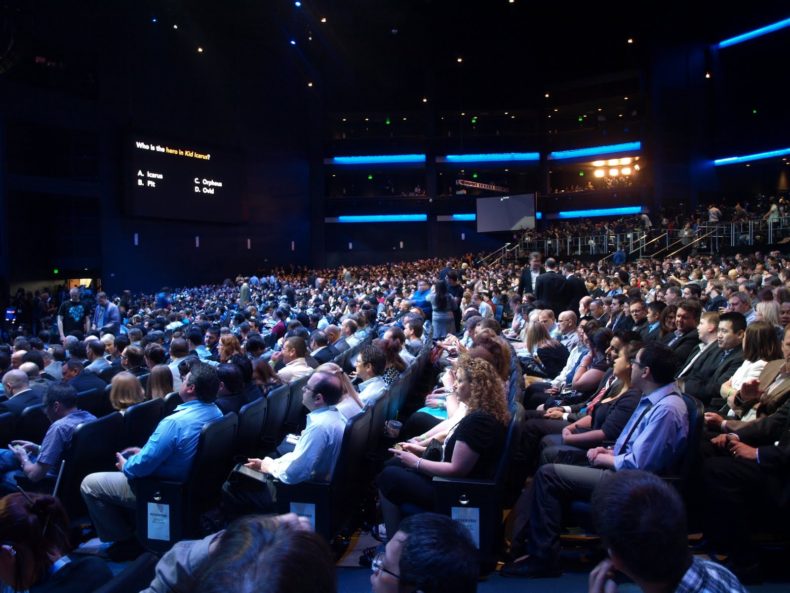 We sort of pride ourselves on our (amiable) cynicism regarding the games industry here. But if there’s one thing we most definitely get excited for, it’s E3. No matter how much we bitch and moan about the state of the games industry, we’re always hopeful that someone on this show will pull out a rabbit from their hats. Some of our best gaming memories are attached to watching E3 when we were young and naive, and despite age and various pressures, we still feel the same each year.

We decided to collect our thoughts since the show is on the horizon, so without further ado, here they are:

Karan: So Pratyush, to start with, how do you feel about E3 this year?

Pratyush: Well E3, as usual seems to be the place where it’s about how many adjectives a second the promoters can pop out with the familiar words like “Bigger”, “More immersive” etc ringing in my ears, especially after EA’s presentation. Yeah, Sea of Solitude and Unravel 2 were good, but apart from that the show was pretty mediocre. I am not really sure how I feel with E3 because the games I am excited for are far and wide. What do you think?

Karan: Well things definitely seem like they’re turning a corner. Over the last year, some great game companies that had lost their way like Capcom, Team Ninja etc, are trying to learn from their mistakes. As everyone knows there are rumours on some really big announcements like a new Devil May Cry, Onimusha being on the verge of announcement. Team Ninja official unveiled Dead or Alive 6, which we hope will lead to a new Ninja Gaiden eventually. A new Hitman was announced and a new Splinter Cell is rumoured to be so as well, what with Sam Fisher’s recent cameo in Ghost Recon Wildlands. It seems like the need for catering to core gamers’ taste are being heard. So I’m excited. I’m also excited to see Shenmue 3 and what exactly Samus Aran in next gen would look like, when Metroid Prime is shown.

Pratyush: The games you mentioned are precisely the games I am excited for apart from some of the smaller indie titles. Otherwise the presenters have their usual slew of sequel churning- FIFA 19, Battlefield V (Not sure if both CoD and BF’s developers have lost it at maths), dramatizing, displaying titillating trailers and trying to woo the crowd by trying to look serious. I am really concerned about that Splinter Cell announcement, worried that Ubisoft might add the franchise to their blob of mediocre sandboxes which they have been pushing out by the numbers. But yes, after Nioh’s success and veteran developers coming back to make a proper DMC sequel, I think this is the most exciting E3 for me since 2014. Plus FINALLY, we get to see or hear something about CYBERPUNK 2077. Oh well, you already know Witcher 3 is my Game of The Generation, so you know Cyberpunk is the winner of E3 for me anyways.

Karan: Yeah CYBERPUNK 2077 is definitely going to steal E3 I feel. It will launch a thousand hashtags and will trend incessantly. Personally, i can’t wait for it. Witcher 3 I agree, is one of the best WRPG’s ever made and knowing how dedicated CDPR are to their craft, I can’t wait to see what I hope to be the most fully-realized cyberpunk dystopia ever put in a video game. It could sure give Deus Ex a run for its money. I really hope it has a large showing, not just another trailer. I hope the devs give a proper, long demonstration of what it is and how it plays. Anything else would be unfair, because It’s been too long. One publisher I’m most curious about always is Bethesda. I can’t wait to see what’s up their sleeve, because they have been delivering big-time the last few years.

Pratyush: Well, I can’t really say how it’ll stack up against Deus Ex because, hey we are about 20 years into the future and still don’t have a game that is like Deus Ex when it comes to an overall package. Bethesda is a wildcard really. Their publishing side is doing wonders while they are slaughtering their in house developed IPs. I mean look at Prey, Dishonored, Doom and now RAGE 2 which looks insane while they have been launching Skyrim for everything that comes out the hardware door. I am excited for Bethesda as well. Considering that Prey had a considerable amount of Looking Glass cast in it’s ranks which they have hopefully retained, I would love to see what they come up with next.

Karan: Yep RAGE 2 looks like a sure shot. I wonder if it will finally nail open-world mechanics with old school shooting. Let’s see. I’m hoping for a sequel to DOOM as well. Also I hope the rumours of the  Rocksteady ‘Superman’ game are true. I feel it could really cross some uncharted territories, as Superman is really hard to get right in any medium. Just ask Zack Snyder. I hope we get to see more immersive sims this E3. I know System Shock remake has been pushed, and the third installment is still a few years away, but it would be nice to see Underworld Ascendant, hopefully at the PC gaming show. Where it belongs. Also, I hope Spector, Neurath, Smith etc. make an appearance like they often do.

Pratyush: In the first few moments when I saw the trailer, it looked like Doom, so I can say that it could be the first open world game with old school shooter-esque mechanics. I am really not sure about Superman. I really feel like any kind of scenario they make will be immersion breaking as long as it’s going to be open world. If they go the Arkham Asylum route, they will miss out on exploiting the flying prowess of Supes and if they go the Arkham City route, they will have to make enemies that don’t get knocked out by simply blowing wind and will have to design that world according to Superman’s powers which is a huge deal. I am conflicted on the Superman game, but it would really be interesting to watch Rocksteady approach Superman in a way no one has previously attempted. I hope to see more of Underworld Ascendant. After their recent trailer it is definitely on my Top 5 list of “I want To See More of This” at E3.

Karan:  Well to be honest better an experimental, weird Superman game than the same-old stuff Sony seems to be giving us with the Spiderman game. When it was revealed, I genuinely thought it would be unique. But right now, I’m not all that hyped. Speaking of which, as a fellow PS4 user, anything you’re looking forward to from them?

Pratyush: I agree, I would rather have an experimental unpolished game over a bland game with run of the mill mechanics polished to perfection. As for Sony, I am really looking forward to Ghost Of Tsushima. Infamous: Second Son was pretty good and I am hyped up for what Sucker Punch can do in a Nioh-esque atmosphere. There is Dreams as well, which had caught my attention back in the days when it was announced. Apart from that I don’t see myself excited for much. What are your thoughts on Sony?

Karan: Well, the Japanese side of Sony does look promising. DMC 5 is rumoured to be an exclusive. Shenmue 3 will definitely be shown. Maybe, just maybe Kingdom Hearts 3 and the 800-pound mysterious gorilla that is the Final Fantasy 7 remake may be shown , if Square Enix wills it. I also hope for some cool japanese exclusives from the company. I hope they have presence. Who knows? It’s easy to by cynical about Sony, but this year does seem like a turnaround.

Pratyush: I thought we were talking about first party exclusives. If it comes to third party announcements there can be a lot. I mean Sega has Yakuza and Persona series exclusive to the PS, while DMC 5 has me excited too. There can be a lot of really good surprises from Japanese third party devs. Also I forgot to mention, we could see something from the devs behind Gravity Rush 2 which in my opinion was an excellent game. I am anticipating a return from Housemarque who developed Matterfall and Nex Machina.

Karan: As for the last piece of the equation, and a switch owner, anything you’re hoping from Nintendo?

Pratyush: As for Nintendo, like you mentioned before Metroid Prime is the front runner with Shin Megami Tensei 5 being a close second and Project Octopath taking it’s seat on the watch list. Oh and I am hotly anticipating the Metroid Prime remasters which would just be a pleasant surprise before Metroid Prime 4’s inevitable release. As a future Switch owner what announcements will solidify your decision finally make the purchase?

Karan: I’m almost decided on my purchasing date. I’ll be busy with Zelda for a while, but yeah, Metroid Prime 4 is the king of the mountain. I also hope the rumoured remastered Prime Trilogy shows up. Along with Shin Megami Tensei 5 of course, and the Pokemon RPG. I’m sure Nintendo has other stuff on its sleeve, let’s hope for the best. That about wraps it up for me. I’m really excited.

Pratyush: We forgot about Microsoft.

Karan: Yeah. When is Cuphead 2 getting announced?

That’s it for now. We’l be covering E3 in one form or the other. Stay tuned

Playing games as a child became a lifelong obsession for Karan that somehow he’s managed to sustain to his adulthood. Enjoys Adult, ‘grown man’ responsibilities as much as the next person, but enjoys play old PC shooters, immersive sims and JRPG’s more.
You might also like
Hot Topic

by Pratyush on June 29, 2018
With the advent of the Steam sales and their exciting discounts, it can often be hard to select games for purchase. So we’ve derived a host of articles, each a list of 5 games from a specific genre consisting of games we consider must-buys. In this [...]