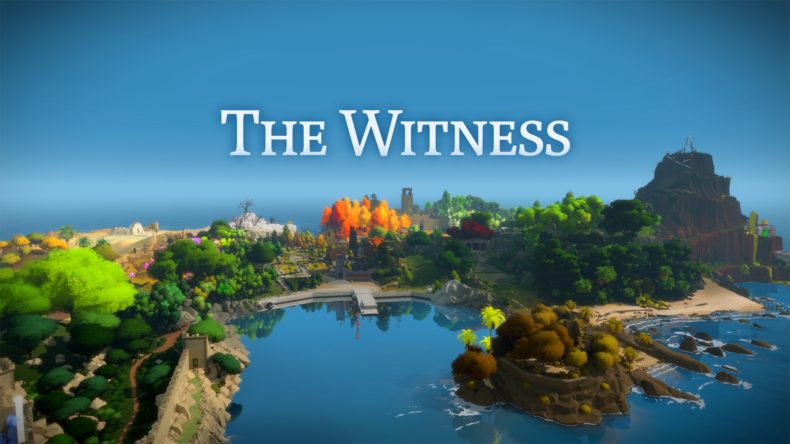 “Hmmmmm”, I mumbled as I was finally bested by a particularly tough puzzle after breezing through a set of easier ones. “Hmmmmm”, I thought to myself as I finally gave up and looked around at the vibrant flora and architecture, in search of a lesser challenge to tackle.

This pretty much sums up the player’s experience as they explore the beautiful, puzzle-dotted island in Thekla Inc’s first-person puzzler, The Witness. I first came across it back in 2016 itself a few months after release and instantly fell in love with it – and since it’s currently free on the Epic Store (till April 18), it’s a great opportunity to revisit this cult classic, which also is slowly inching towards becoming one of my favorite games of all time.

Part of The Witness’ charm comes from its mantra of ZERO handholding – and zero, means zero. There’s no cutscenes, no dialogue, not even a plot or a tutorial (at least none in the traditional sense). You wake up as a voiceless, nameless person inside a tunnel area. On reaching the other end, you come face to face with a panel with an odd engraving in it; interacting with it reveals it to be a line puzzle of sorts – essentially connect the starting, bleeping end of the etch to the other bleeping end, that’s the basic objective.

Once that’s done and you’ve exited this odd bunker, you’ll find a handful of more similar but more complex brainteasers to solve. Eventually, it’s pretty clear you’re on an island; an island filled with hundreds of different such puzzles scattered throughout various biomes and set pieces, each having their own quirks, rules and gimmicks – despite all of them being about making a line pattern on a panel. 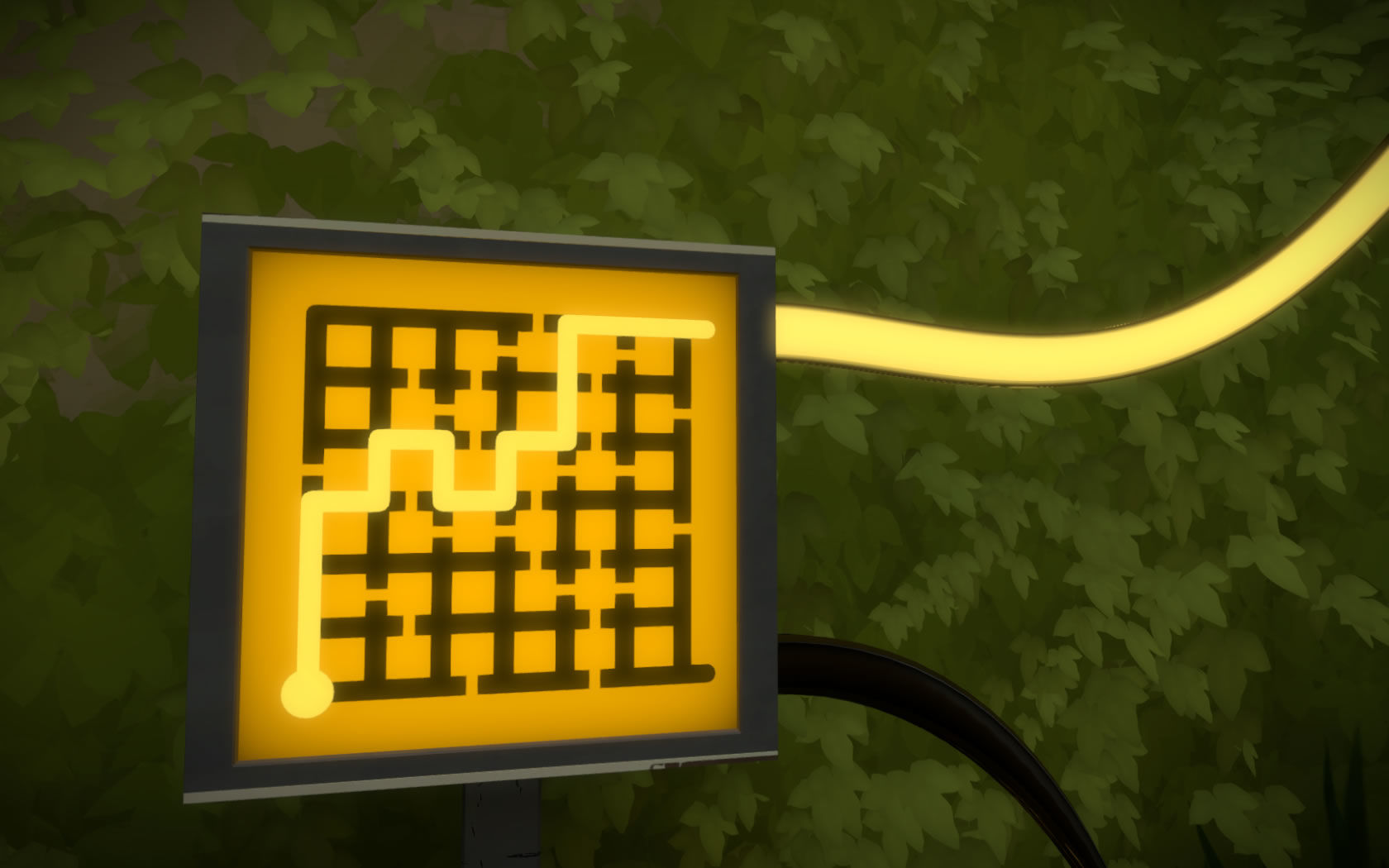 One of the puzzles in the starting area

Some may require the use of elements from the surroundings to progress (like sunlight and shadow), others might demand pure logical skill. Some even make use of environmental sounds, exactly why the game lacks a soundtrack of any sort – but it does make up for it with crisp, clear sound design, be it the solid gravel crunching beneath your feet or the echo of your footsteps bouncing off corridors. 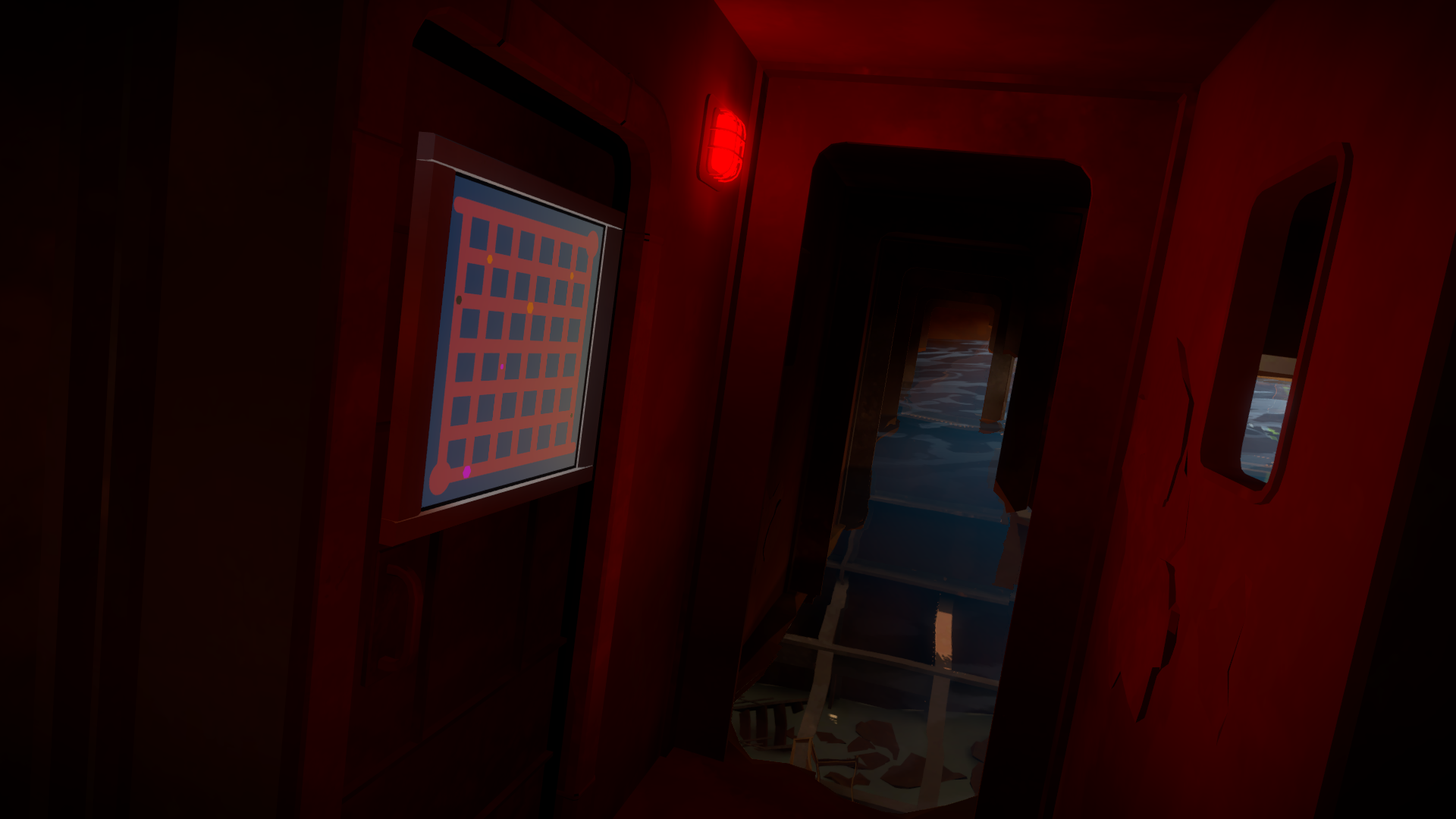 One of the puzzles in a shipwrecked area

Now as mentioned before, The Witness leaves you to your own devices. Why are you on the island? What mysteries does it hide? Why are there puzzles everywhere? How can you get out of here? To answer these questions, you’ll need your wits and a truckload of perseverance to see through to the end. 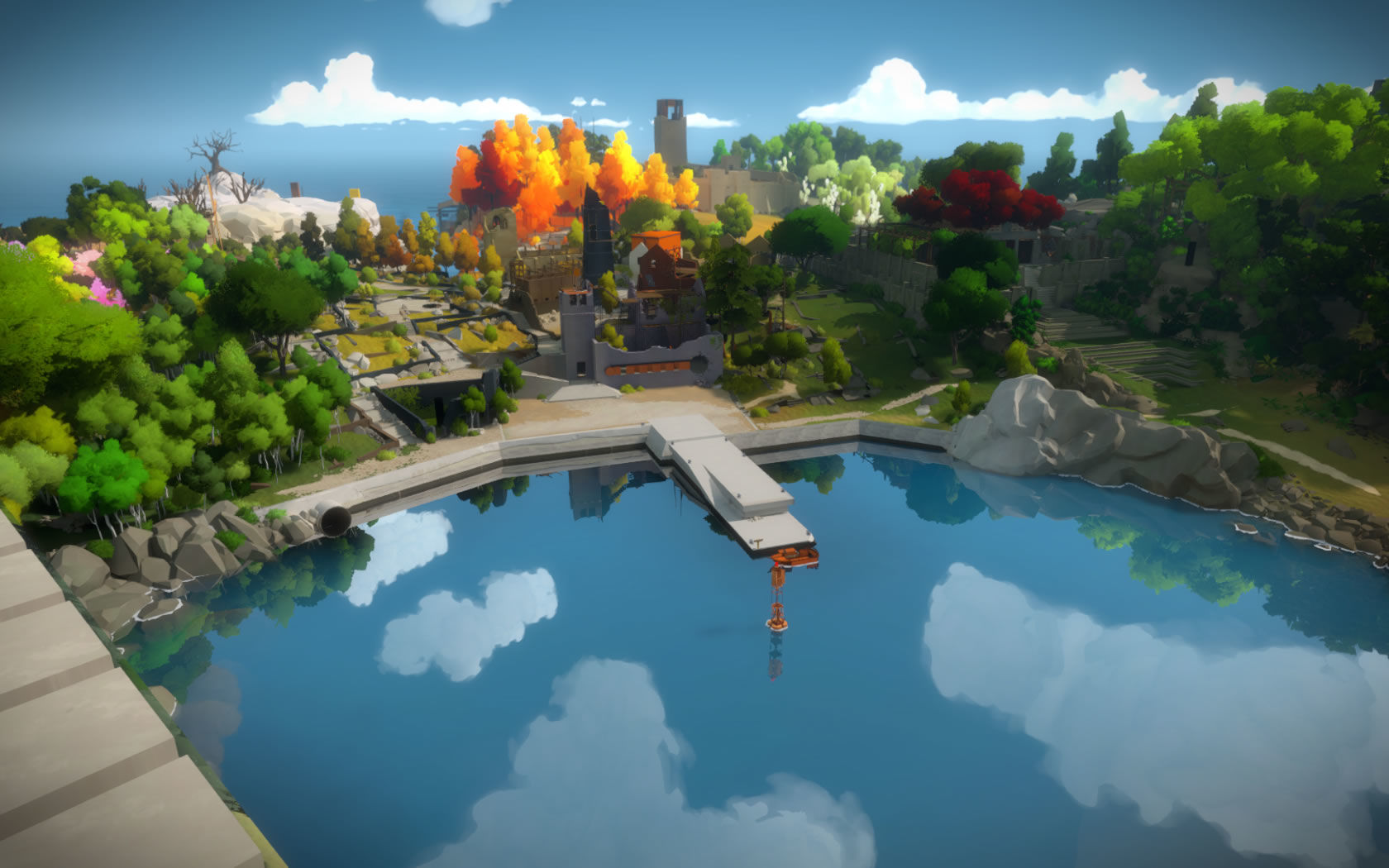 The island to be explored is a completely non-linear, open-ended one; you can go nearly anywhere, solve puzzles in any order as needed. Can’t make head or tails of a specific puzzle? Perhaps move on to some other area.. who knows, you may stumble across the answer. I will admit that I’ve not finished the game on either occasion of playing it – in fact currently, I doubt ever will. Some of the puzzles (especially the larger set pieces revolving around entire environments being parts of the puzzle or even wholly separate puzzle ecosystems of their own) are incredibly obtuse, so much so that even hours of head-scratching may leave you stumped at square one. 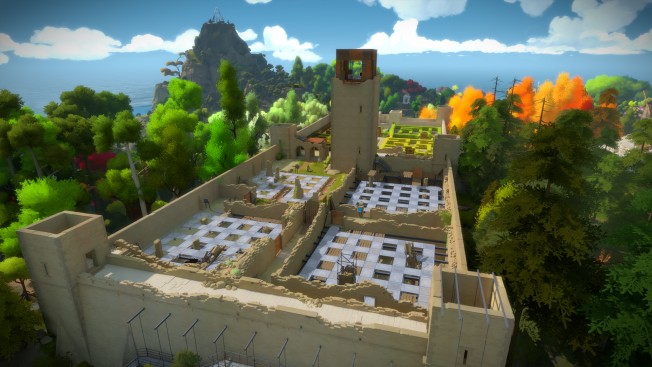 A head-scratcher for sure

Looking up what certain symbols pertain to will certainly help, as there are more than a few missteps on part of the devs in terms of game design because the game can often lack a sense of clarity; as weird as it sounds, it may even be such that the ruleset of a puzzle may elude you even though you manage to solve it – and that could pose a problem in future resulting in potential roadblocks. As an example, I still cannot for the life of me, figure out what the panel puzzle inside the white warehouse near the desert area is about even though I’ve solved most of them. Most importantly though, none of them feel tiresome or repititive due to the sheer variations to be found. 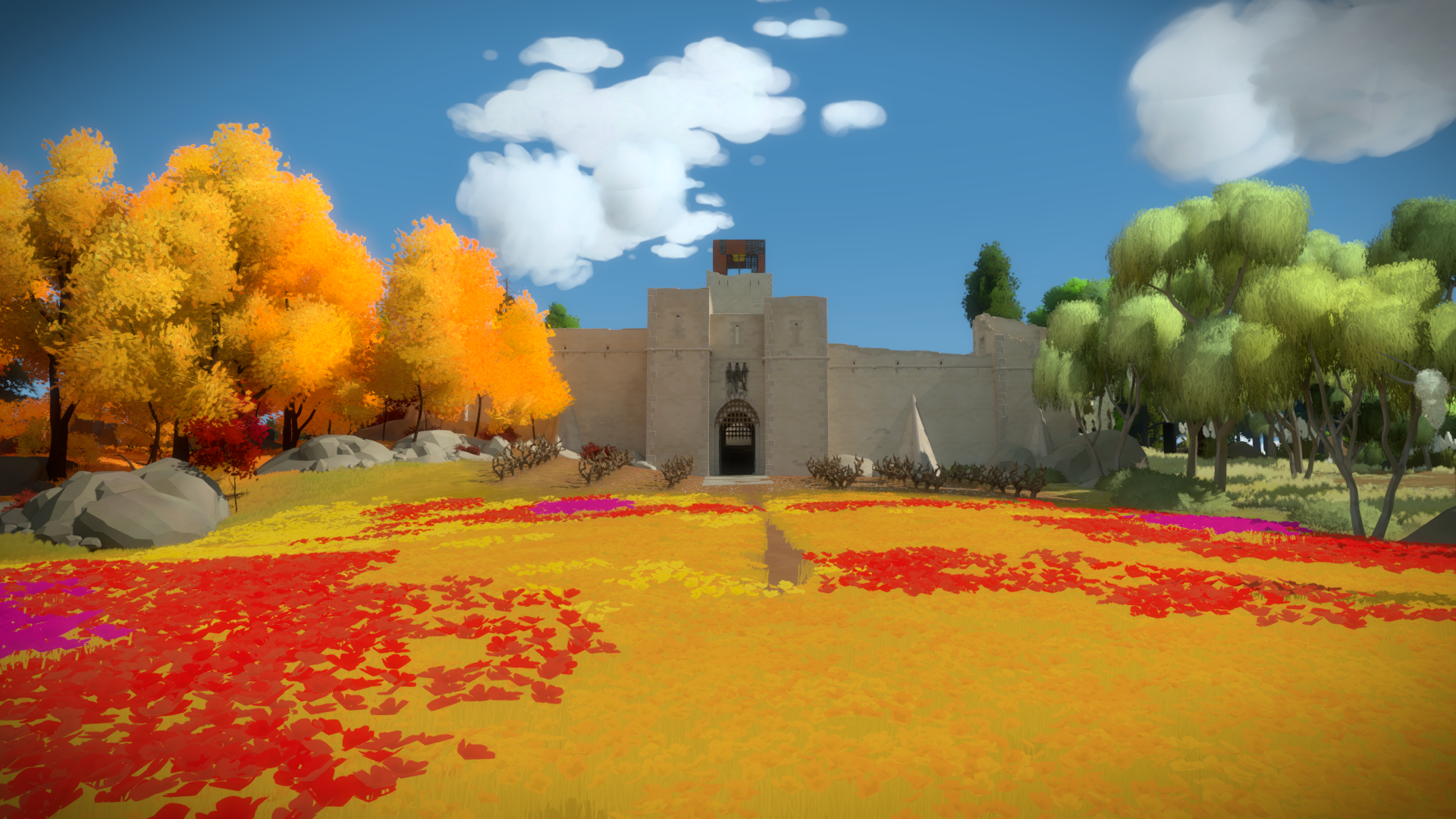 But The Witness does offer more than just walking and puzzles, and that’s the other “charm” of it – the art style is simply BEAUTIFUL. From the fiery autumn-laden pocket of the forest, lush green bamboo thickets, pleasingly blue beaches to rundown settlements, forlorn castles and secretive observatories – the vibrant colors just pop and pour into one another, resulting in visuals akin to something out of a mesmerizing watercolor painting. 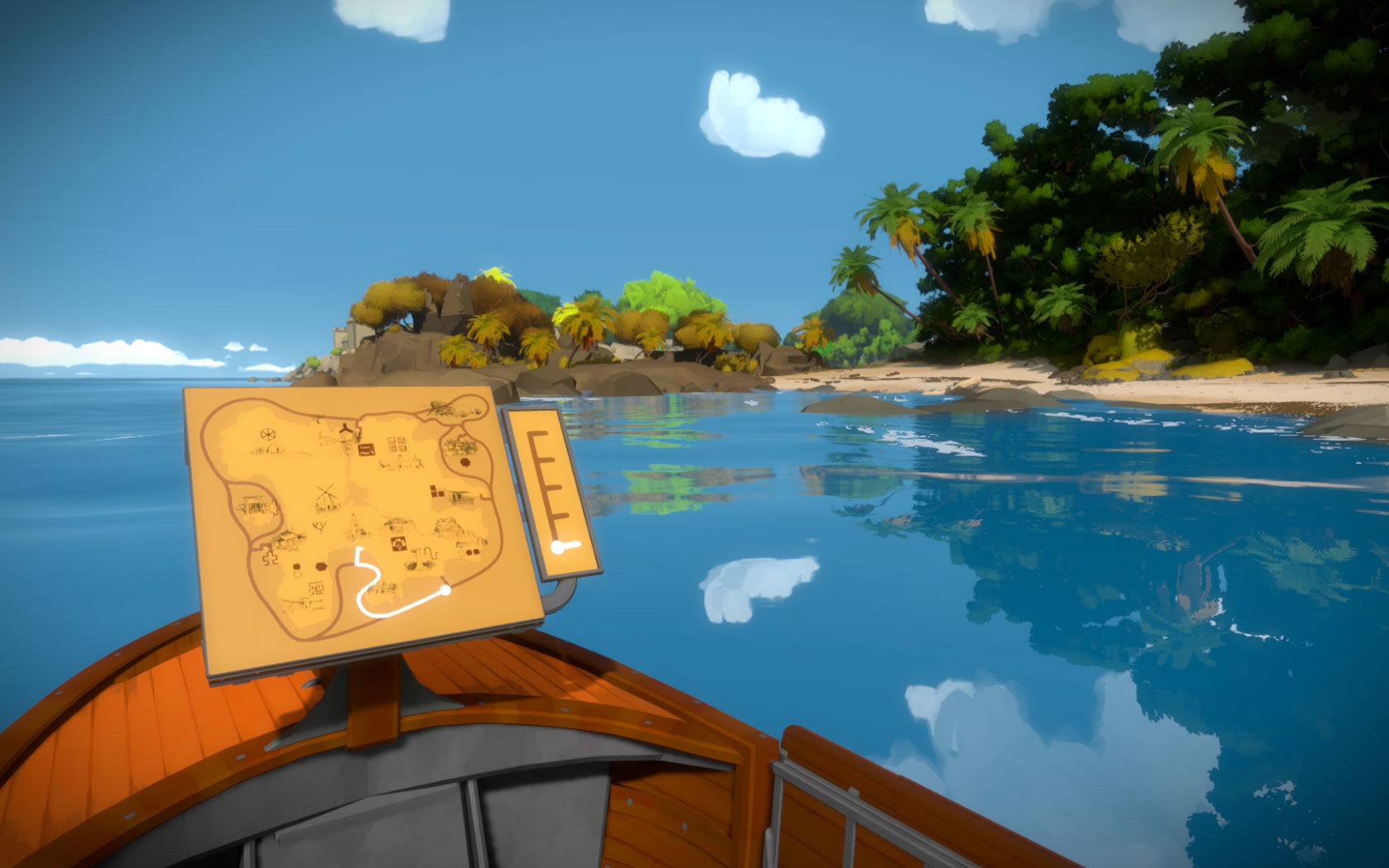 There’s even a boat you can summon from one of the several docks that can be used for quick traversal across the various settings of the island; it’s an amazing mechanic to not just move around but also take in the gorgeous environment and pick out points of interest, like hidden away puzzle panels. 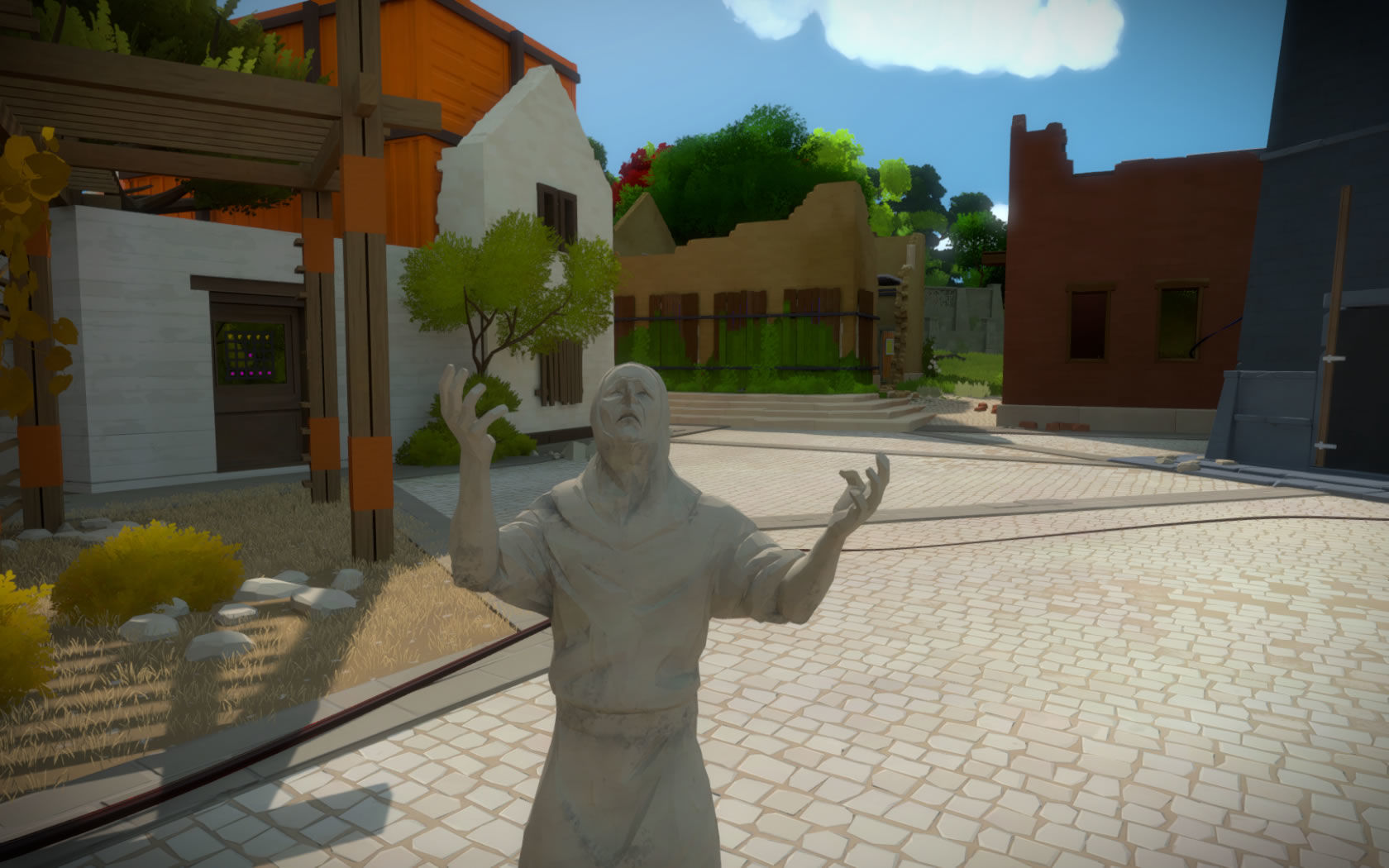 Then there’s the handful of audio logs smartly placed around the map, each spouting philosophical quotes that… Honestly make little sense in context of the game. There’s also several stone statues of people scattered around the island, frozen in time and each in a different pose, like reaching out to someone or something, or expressing an emotion. Just for decoration? I think not, as the game is too smartly made for that.

Overall, there’s a lot more going on on this island than meets the eye, and I’m willing to spend hours more trying to uncover the truth to this forsaken heaven of puzzles and mystery, however frustrating the journey may be. Puzzle lovers are more than welcome to explore The Witness’ secrets, but those who hate these kind of games would do well to stay away – this one’s not for the faint of logic.