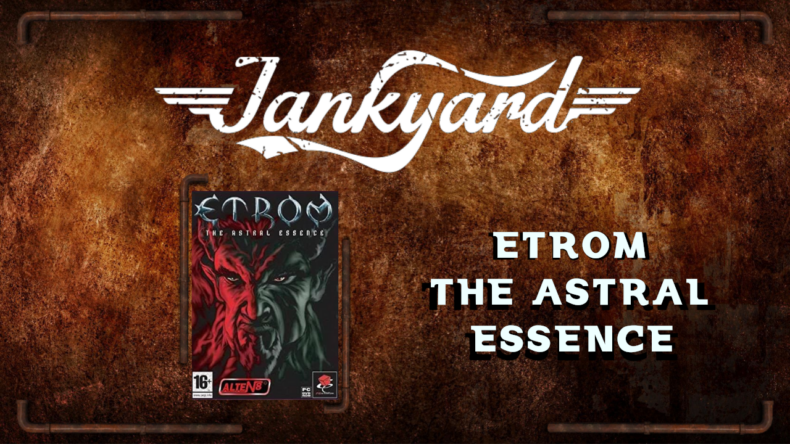 Most people go one of two ways when it comes to click-to-kill RPGs. Some prefer that it makes the game feel more stats than skill-based, and some feel that it makes the game a little boring and monotonous. I somehow, sit in the middle of these two opinions. I’ve played my fair share on either side, with games like Dungeon Siege III and The Lord of the Rings: War in the North on one side, and titles like The Chosen: Well of Souls and Sacred 2: Fallen Angel on the other. I guess what I’m trying to say is that I’ve experienced a lot of games that have tried to emulate the Diablo-like formula and a lot that have tried to carve their own identity in the heavily saturated world of PC RPGs, but I’ve never experienced anything quite like the techno-fantasy epic that is Etrom: The Astral Essence.

Announced on July 3rd 2003, Etrom was meant to be the centerpiece for a new multimedia brand, consisting of the video game, a line of comics, and a classic pen and paper RPG. Developed by P.M. Studios, it was set to be their biggest project to date, with much of their previous works consisting of Flash game releases such as the engine-pushing King’s Island series, as well as Fantasy Kommander and Eukarion Tales. Whilst they may not have ever been a household name outside of their homeland of Italy, they were obviously a team of talent, and ambition – something is displayed by the sheer depth and variety in their flash titles. The company has also gone on to make various educational games, in lines such as the environmental-based ‘EcoWarriors’, and the risk-awareness themed ‘ScacciaRischi’, which has an annual tournament that takes place in schools in the Apulian region of Italy.

Etrom was born out of a fork in the road. P.M. Studios had been working on the action platformer Kien for the Gameboy Advance, which ended up being unfortunately cancelled, despite seeming very promising. Etrom was conceptualized as a “point and click action RPG”, a game that would’ve mixed Blade Runner with The Lord of the Rings to create a setting unlike any other – techno-fantasy. Both EA and Ubisoft had been interested in a publishing deal with P.M. Studios early in development, as the announcement and website had managed to generate quite the buzz. Unfortunately, post-release of the game’s demo, both publishers backed away, stating that although it did seem like an interesting project, it didn’t suit their needs.

Eventually, P.M. Studios would fall into debt, and the summer of 2005 was spent working harder than they had ever worked before, trying to get a gold master of the game and sell it, or perish under their crippling debt. Managing director Fabio Belsanti managed to track down some distribution channels, and the studio self-published the game in Italy prior to Christmas 2005. Unfortunately, due to the rush here, the game wasn’t exactly how the studio wanted it to be, in their eyes it was unpolished, unfinished, their innovations were limited, and even cut – along with the multiplayer that was planned.

Following the Italian release, P.M. Studios wanted to patch up the game before looking to publish it in the rest of the world, they wanted to make all the necessary changes to make it in line with their vision, but their self-publishing had done little to remedy their cash problems. The financial mismanagement of their then-accountant had cost them dearly, not only monetarily, but in terms of vision as well. At the beginning of 2006, P.M. Studios needed to sell Etrom to a publisher, and it needed to happen fast. Contracts were signed for 18 physical and online distribution deals, but there was very little room for marketing or advertising.

Later in the year, Etrom made its way to players and journalists and ended up with one of the most polarising ranges of reviews I have ever seen. GameSpot gave the game a severely undeserved 2/10, and GameZone gave it a 7.5/10. I’ve covered some pretty polarising games over the past few years, such as Alpha Protocol and Advent Rising, but a range like this is really something to behold, and a clear sign that you should stop taking GameSpot seriously. The game ended up falling into obscurity pretty rapidly, despite selling upwards of 50,000 copies, but unlike a lot of these stories, this wasn’t the end for the developer, and perhaps even more surprisingly, it wasn’t the end for the IP either. Etrom was recently revived in the form of an Italian language-only sci-fi novel, Etrom: L’Essenza Astrale – Il Richiamo (Etrom: The Astral Essence – The Call), but that’s a story for another time – onto the game.

Etrom is an old-school RPG with a free camera and Orwellian-esque narrative. The game puts you in the shoes of the titular character, Etrom, a member of an oppressive military unit, who after discovering an ancient artifact, has had his blinders taken off and realised his true purpose and left the military to achieve it, making him a hunted fugitive.

You’ll travel through the varied environments of The Astral Essence, fighting off tonnes of different enemies with your giant astral axe, magical abilities, and large 30+ weapon arsenal. This arsenal is pretty diverse, and there are a number of different options under every weapon type, such as multiple handguns and automatic rifles, with two different ammunition types spread across the game’s weapon types. You find these weapons on your fallen enemies, and in crates littered across the game world. If you explore enough, you can find some pretty awesome weapons, and I spent a lot of time grasping the powerful pistol I found in a crate within the sewers early on.

The sewers are just one of the many places you’ll be able to take Etrom too, and each locale is more intriguing and full of secrets than the last. The opening city has this awesome dystopian vibe to it, with stormtrooper-like enemies patrolling the streets, various military outposts and the relaxing audio accompaniment of a rainstorm, which obscure that which lies in the distance in such a way that you need to be incredibly wary of walking into your enemies line of sight without realising it until it’s too late.

The combat itself is pretty old-school, with the player needing to click on enemies to approach and attack them. Lining your hotkey bar with health potions is key to success, as the game thrusts some VERY difficult situations your way. You’ll run out of ammo often, you’ll run out of health potions often and you’ll end up being chased by more enemies than in round 20+ of Call of Duty: Zombies, often. Its difficulty is unlike any game I have ever played, and it’s all down to the resources. This means you will need to grind and grind hard. You’ll need to farm the same areas over and over again in order to farm potions and ammo. You won’t get by without doing so, and you’ll need to learn to separate packs of enemies, taking them out one-by-one like a slasher movie killer, albeit a hell of a lot less stealthy and brutal.

Whilst difficulty could be a turn off for a lot of players, there’s something about it’s presence here that just entices me, every time I die I feel more and more like I need to go back in, I need to discover the secrets, I need to help Etrom realise his true purpose. In many ways, difficulty is one of Etrom’s biggest strengths, and biggest weaknesses. Difficulty has always been polarizing when it comes to video games, and a lot of people won’t be able to stick it out, but those strong enough to keep at it will find one hell of a game buried under it, and one hell of a story.

P.M. Studios are fortunately still active to this day, and thriving – albeit not as an ambitious RPG developer. I would’ve loved to have seen the true Etrom that the Italian studio wanted to create, had they had the right finances and timeframe to do so. As it stands, Etrom is incredibly unique, and fairly interesting. It’s not perfect by any means, and the difficulty is likely to put some people off, but it’s definitely a game worth checking out. Buying a copy now can be difficult, and no money will go to the developer through general purchases. The best way to support them is to buy a physical copy directly from them at info@pmstudios.it – be sure to tell them I sent you!

If you’d like to see more oddities in the Jankyard, click here to view all of the previous entries.

Know of any other underrated, obscure, or forgotten games? Let me know, and I’ll be sure to look for a copy and potentially cover it in the future!