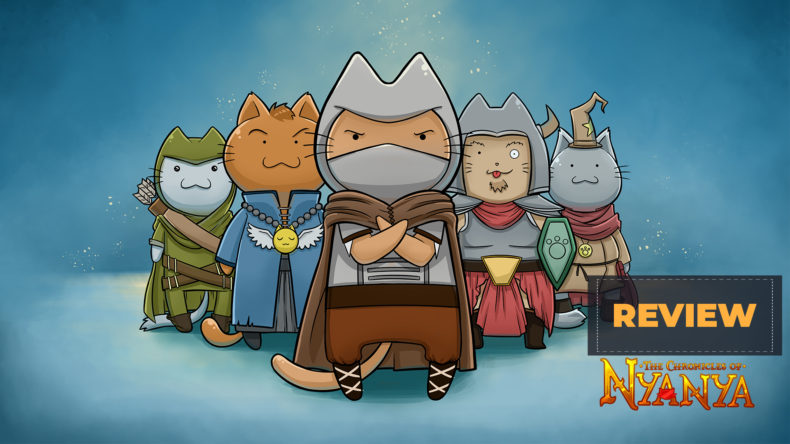 The Chronicles Of Nyanya

Taking place in the kingdom of Nyanya, this meowtastic adventure puts you in the role of a group of young cats and features JRPG-inspired gameplay and tons of popular references.

Looking at the title, you may think Chronicles of Nyanya is prominently about two things: pop-culture references and cats. And you’re right, it is.

Developed by Polish indie studio Hamstercube and published by Fat Dog Games, this is a JRPG-inspired tale about a group of anthromorphic cats on a journey to prove their worth. The game is available on Steam for $20 or 529 INR. 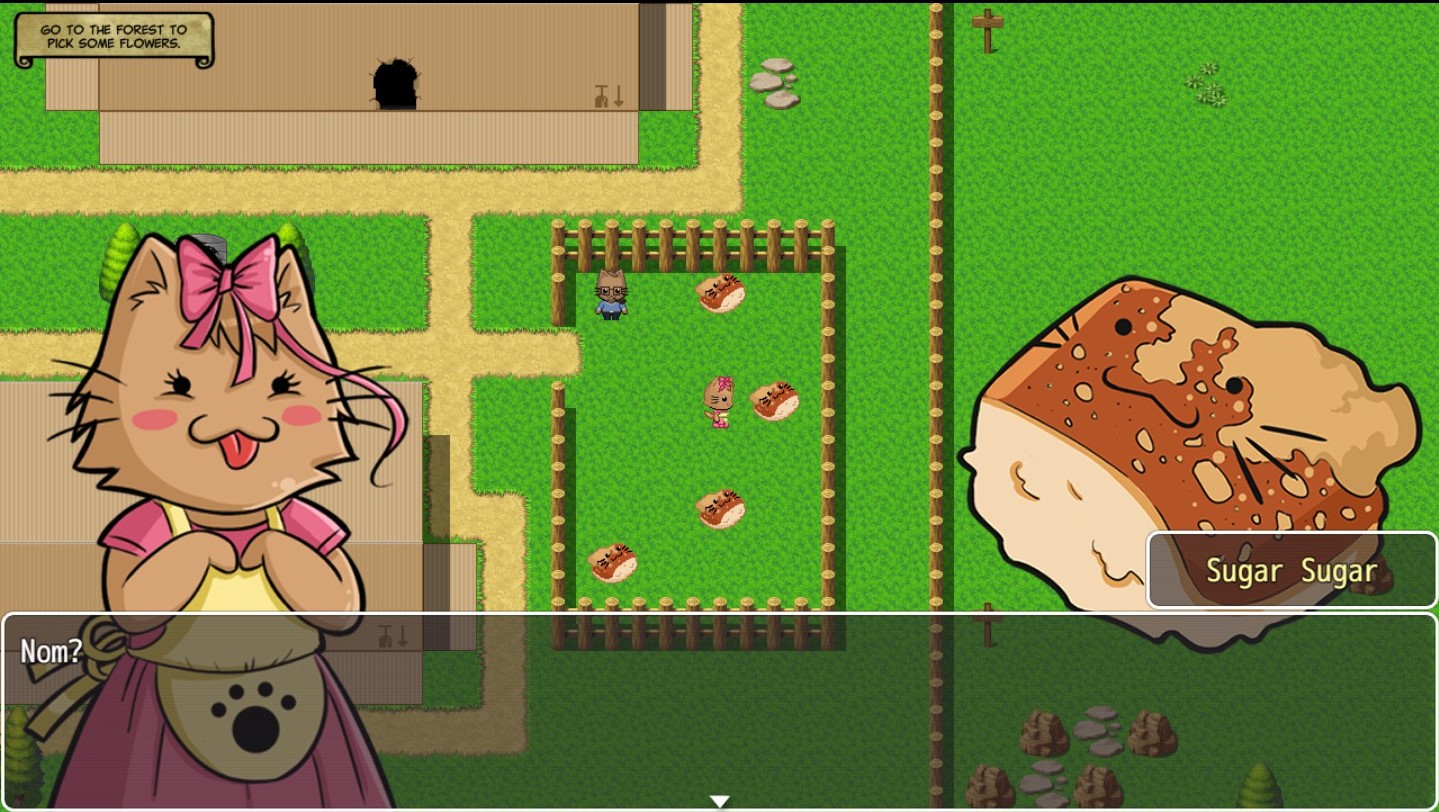 The game takes place in the whacky world of Nyanya, a kingdom where cats walk on two feet and talk, trees look like cats and bread rolls are kept as pets. Our protagonist Catair is a hardened “meowsassin” who, at a young age, witnessed the death of her family and village at the hand of Orcats, a tribe of violent orc-like cats and has vowed to avenge her family. Thus she sets out on a journey to learn the assassin’s arts, meeting a colorful cast of characters on her way and engaging in a variety of weird scenarios.

By now you may have noticed the games flair for referencing other popular media. The title is taken from C.S. Lewis’ Chronicles Of Narnia; Catair herself is based off Altair from Ubisoft’s Assassin’s Creed games. You get the gist. Of course there’s more, from references to other shows (including characters based off Naruto and Harry Potter), popular memes and even other games (like The Elder Scrolls V: Skyrim). 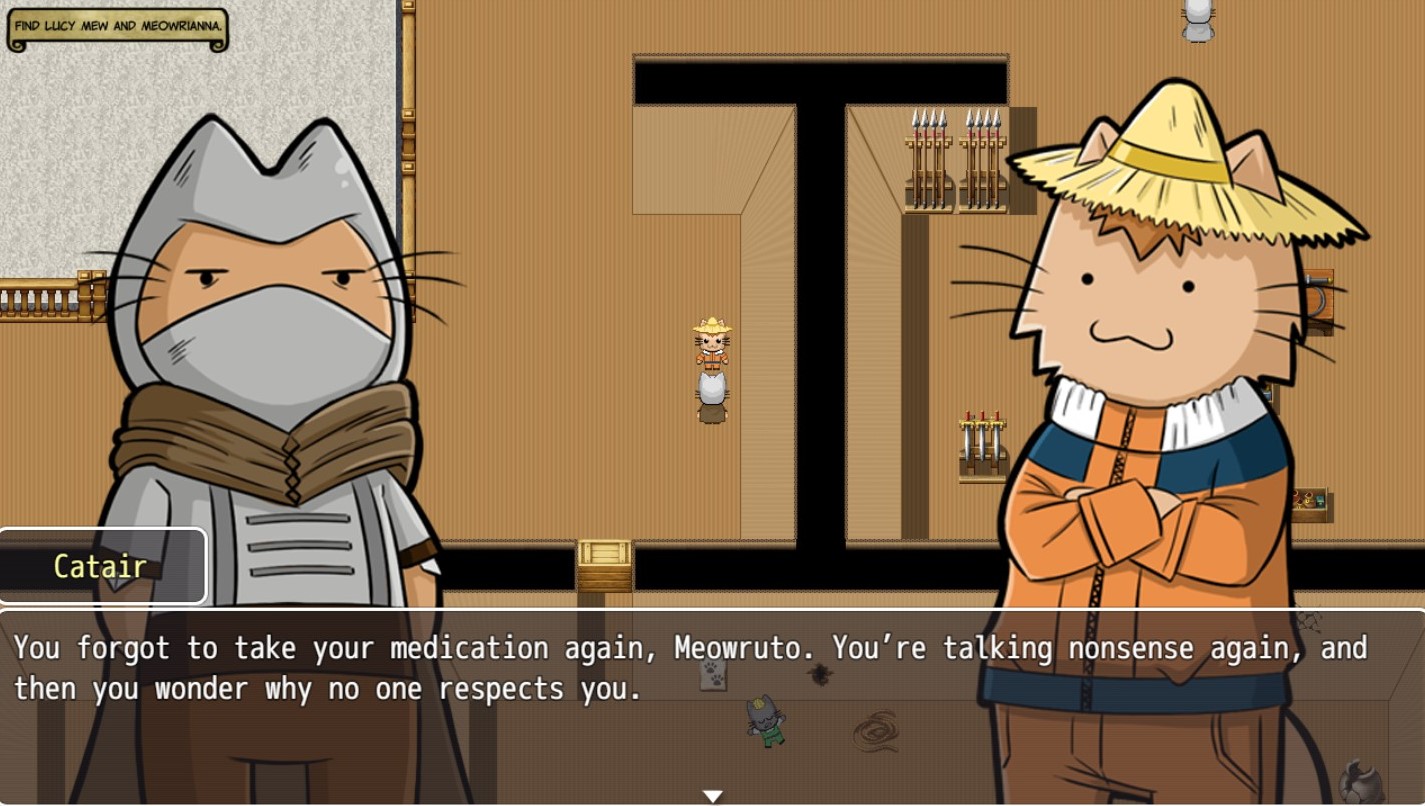 This, coupled with some witty dialogue makes up for some pretty funny dialogue, but more often than not the humor falls flat and at times, is even edgy and overused (like Catair’s constant reminders that she is a “dark avenger of hatred”).

Moving on to the characters, they’re quite unique, from the misunderstood “antagonist” Purrevar, the cunning magician Francat, the cheerful archer Catniss, the brawny Purrgli and the sorcerer Meowdledore (yep, a reference to Dumbledore from Harry Potter). All of them have well-crafted personalities but again, the humor can be cringey. 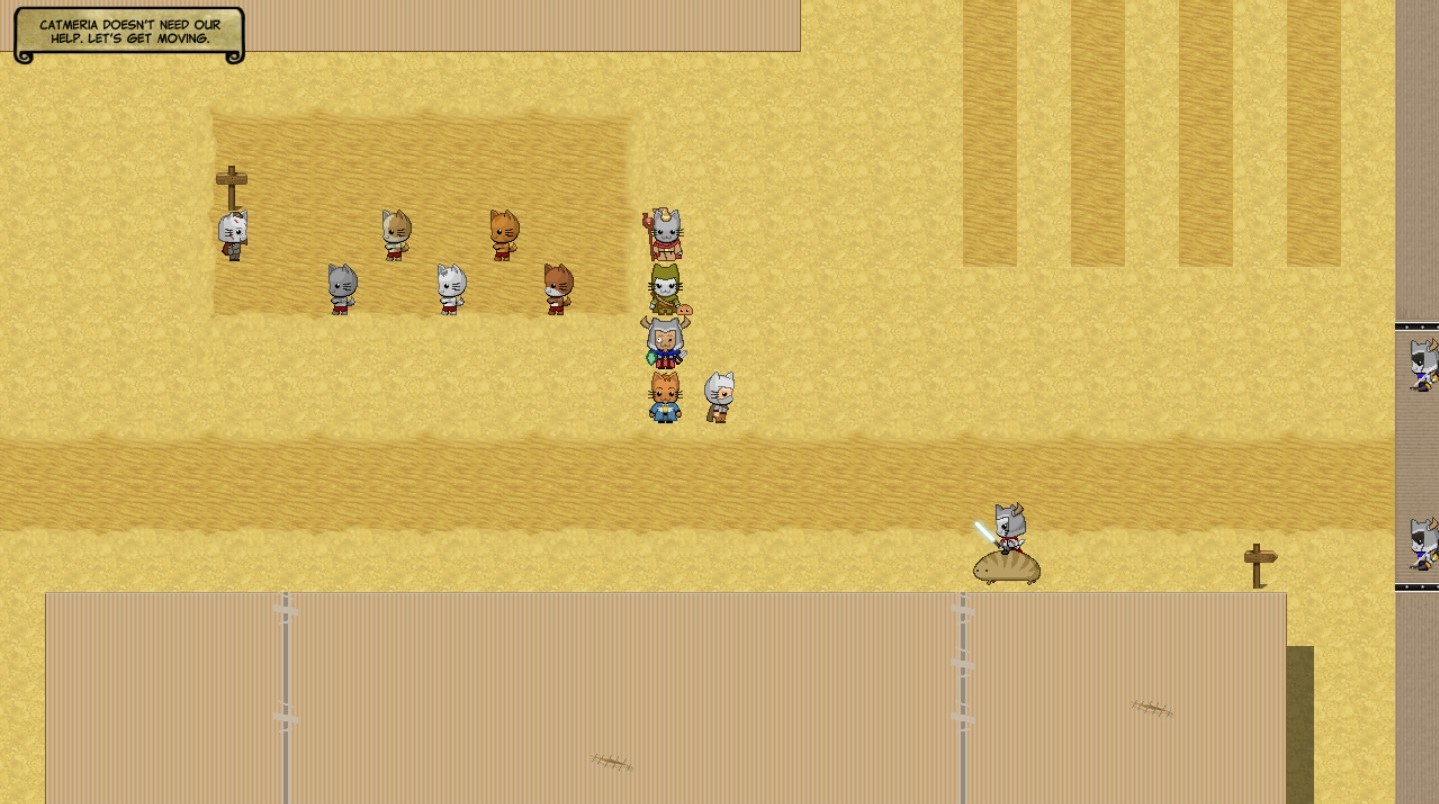 The game is developed using RPG Maker, so the visuals are quite simplistic and perhaps even a bit bland at times. The character portraits on the other hand are very well drawn with some pretty expressive ones mixed in the bag (like Catair’s comical flashbacks). Effects during battle are somewhat underwhelming and lack punch though.

The gameplay is moulded in your typical JRPG fashion: you explore areas (with or without your party at tow), talk to NPCs to get to know about themselves, the lore and the world.

The problem is, the game throws so much information (like lore details and backstories, at times even involving plenty of jabs and references) at you and with such frequency, sometimes it feels like you’re better off just skipping the dialogue, than read it. There are also characters and places that are just there for nothing more than fan service, and this renders most set pieces/quests unmemorable.

The game also allows you to have multiple dialogue and actions that, depending on what you say or do throughout your playthrough, will change the outcome of the game. For clarification, I got a bad ending where my party fails in their adventure, but yeah, this aspect is very well done. You can also talk to people to take up optional side quests, and the freedom of choice also plays a role here, affecting your final reward. The quests themselves are varied, like catching mice for an old traveling witch and saving a merchant from being tormented by Drowncats – undead zombie cats who drowned and now seek revenge on the living.

Now unlike most old-school JRPGs, this game does not have random encounters. Instead, they can occur in different ways like, set pieces and stealth sections; the latter of is frustrating for the most part since enemies act as sentries, patrolling corridors and spaces in a set pattern, therfore operating on a sound and visual format.

What’s the problem you ask? Run fast or enter their field of view (which you will, considering it only extends to 3 tiles and it’s tough to judge at times since there’s usually multiple enemies moving around), and they will rush you faster than you can have time to process what’s going on. Couple this with the extremely jarring encounter animation (that made me jump at least a dozen times throughout my playthrough), it makes you want to avoid battles rather than tackle them.

Speaking of battles, the game has turn based combat, with your standard Attack/Magic/Guard/Items/Run setup. In your entire party, only Francat and Meowdledore can use spells (which need MP to be cast). Catair and Purgli are melee attackers, but both also have a guage called Fy which builds up by a few points everytime you hit an enemy so that you can cast powerful special attacks (which cost Fy).

The enemy variety is quite decent, from orcish fiends, to cat mummies and even furniture (like a chair, stool and a bookshelf). Attacks and spells are also hilariously named, and buffing/debuffing is your path to victory. The objective to winning is still about dropping all your enemies’ health to 0, and while the combat system itself is well done, it doesn’t feel particularly satisfying or is anything worth writing home about; it gets the job done. However, there are tons of balancing issues here: 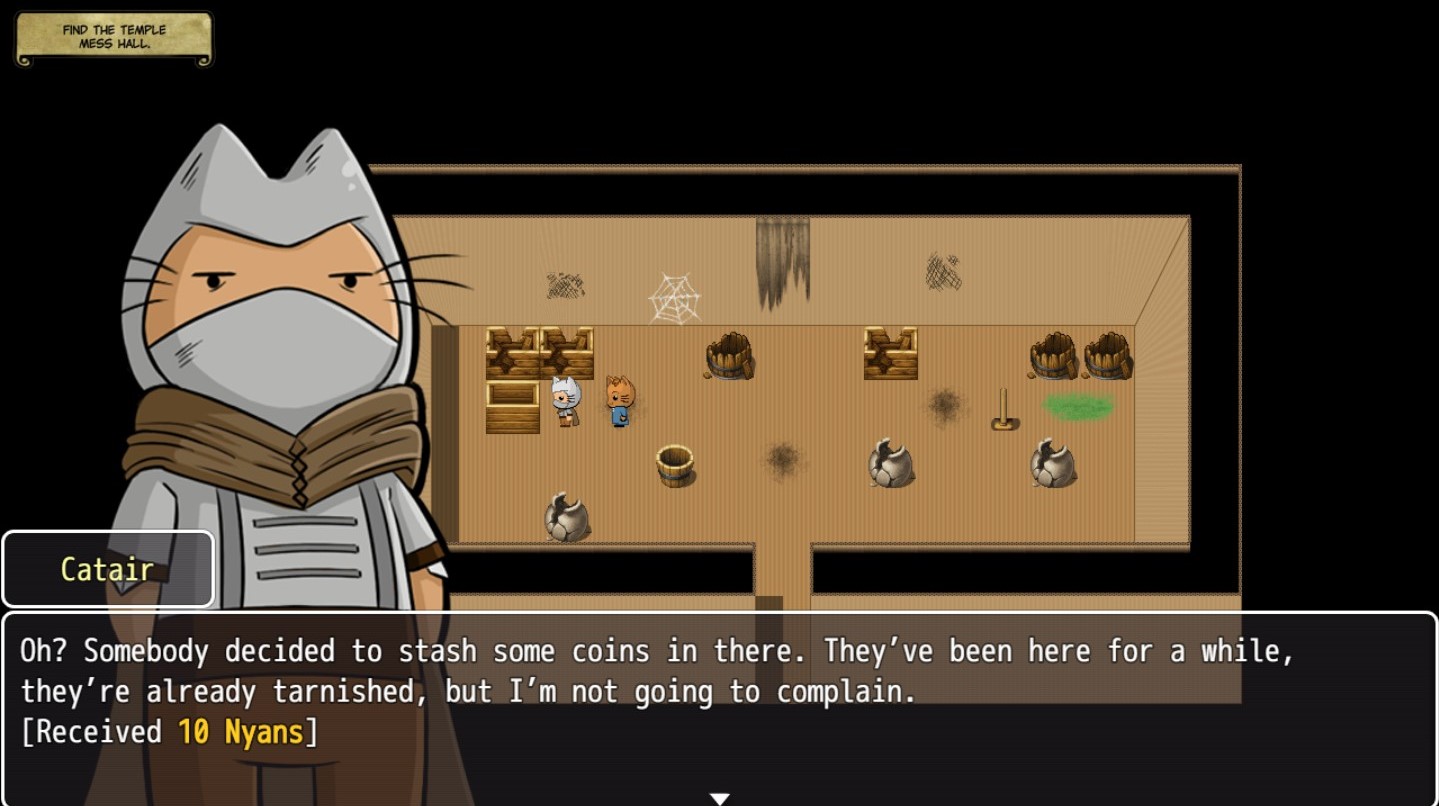 Engaging in encounters or completing side-quests will give you experience points which are quite vital for tackling some of the tougher enemies in the game. Exploring will also nab you ingredients to craft a variety of items (once you have the Crafting Cauldron that is), from bombs and magical arrows to armor. The latter are quite powerful, but rare, so strategic use is advised. Other than that the crafting is incredibly simplistic and doesn’t add much to the game apart from battle items. 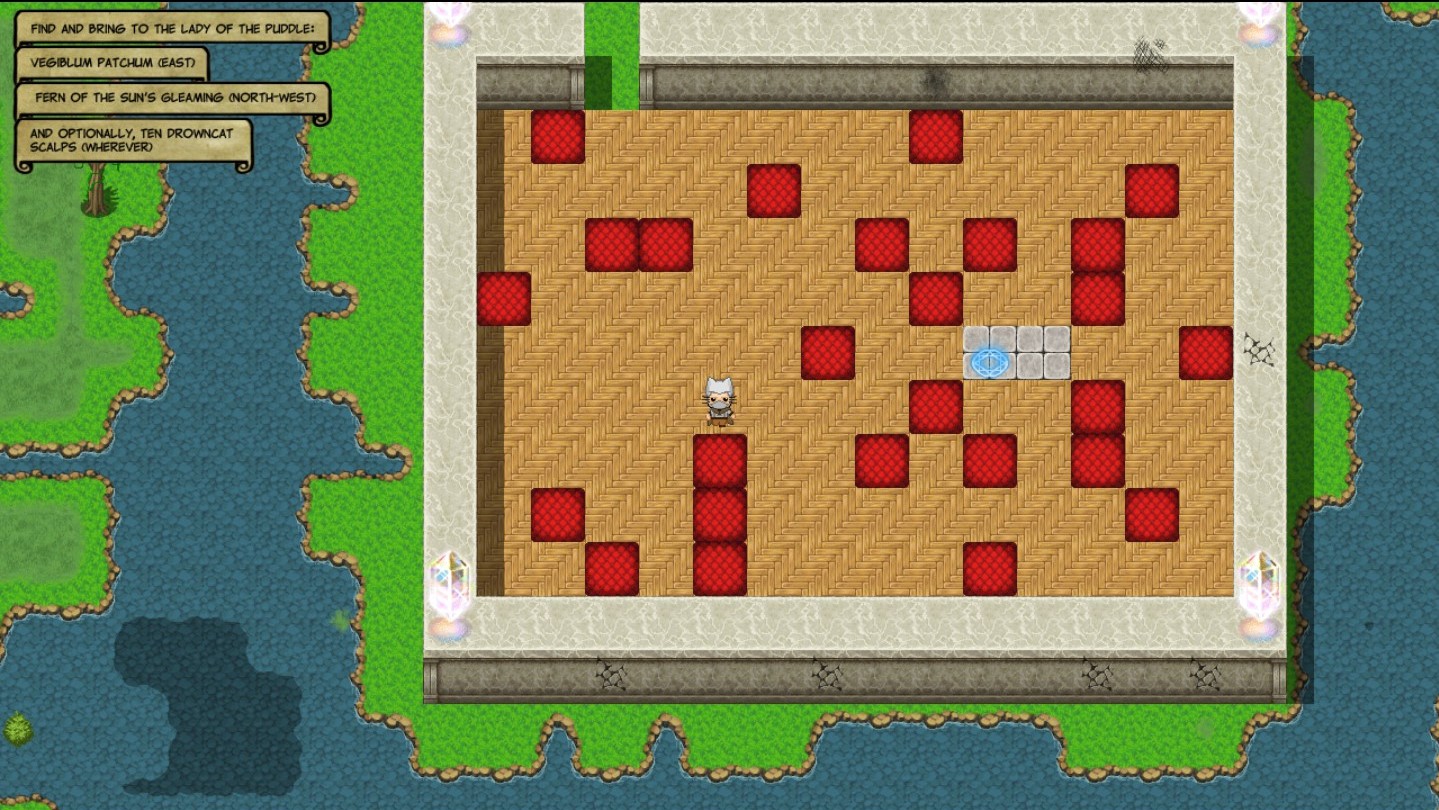 There are also puzzles to engage in, but these are are quite easy and of three kinds: pushing 3×3 puzzle pieces together to form a portrait, pushing shards in their respective colored spots and navigating a maze with a slippery surface. 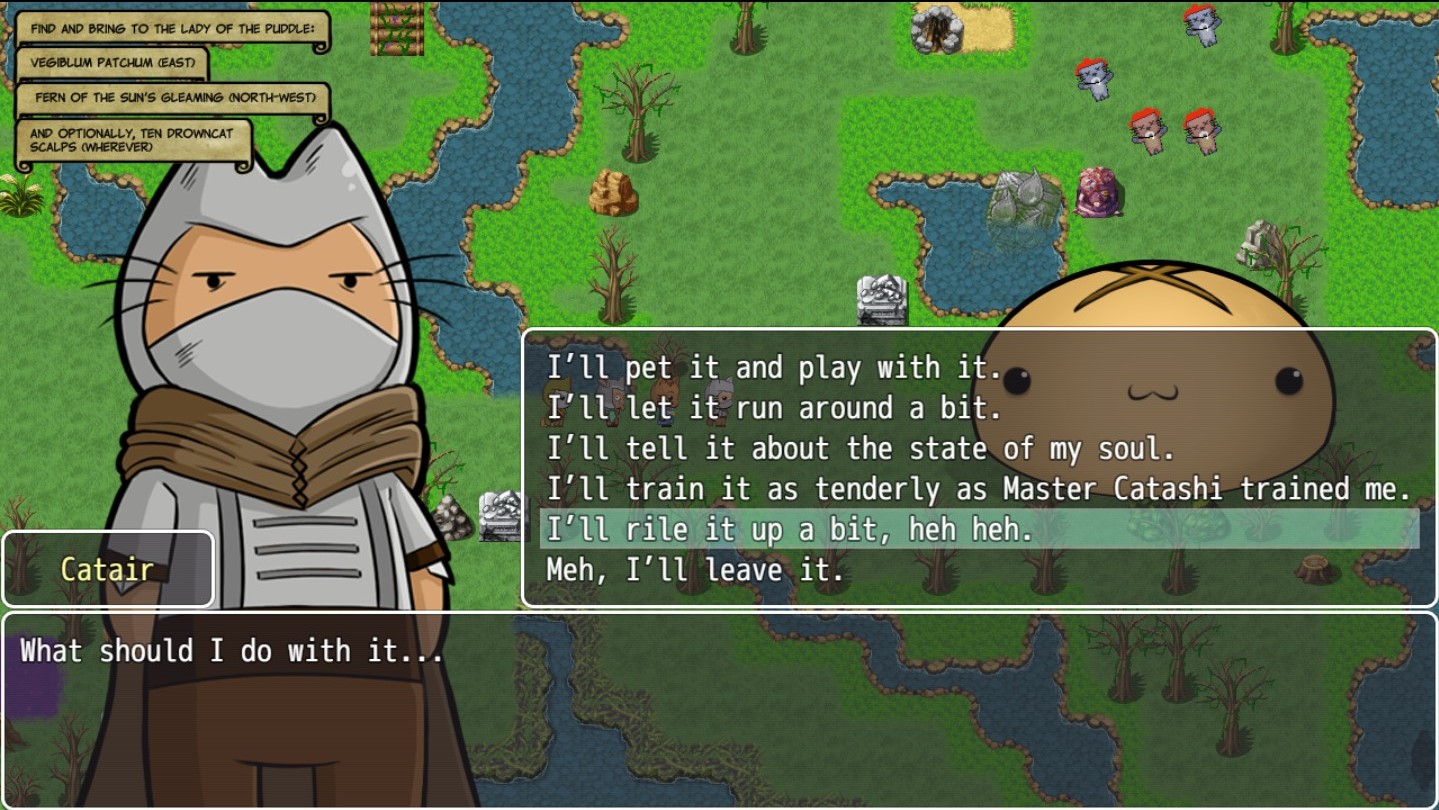 As a side-diversion you have your own roll (remember the pet bread rolls I talked about at the beginning?) but honestly I had no idea what to do with it (the game is quite vague when it comes to explaining the roll petting/growth) and it ended up dying. Oh well. And no, i did not rile it up if that’s what you’re thinking…!

The audio is well done here, mostly consisting of melancholy orchestral sounds which fit in well both in the overworld and during battle. Since this is a small budget game, there are no voiceovers at all.

The battle sounds, while decent, feel somewhat lacking in punch, and perhaps this also adds to the unsatisfying combat.

The game took me about 14 hours in total, so there’s a decent amount of stuff to see here. There’s also a New Game+ that let’s you start over with your achievements intact and gives Catair a new skill.

If you’re expecting a solid RPG experience from The Chronicles Of Nyanya, you will be disappointed. However, if you want to experience the weird world of Nyanya with it’s plentiful references, (mostly) humorous writing and dialogue choices, it’s worth a shot. 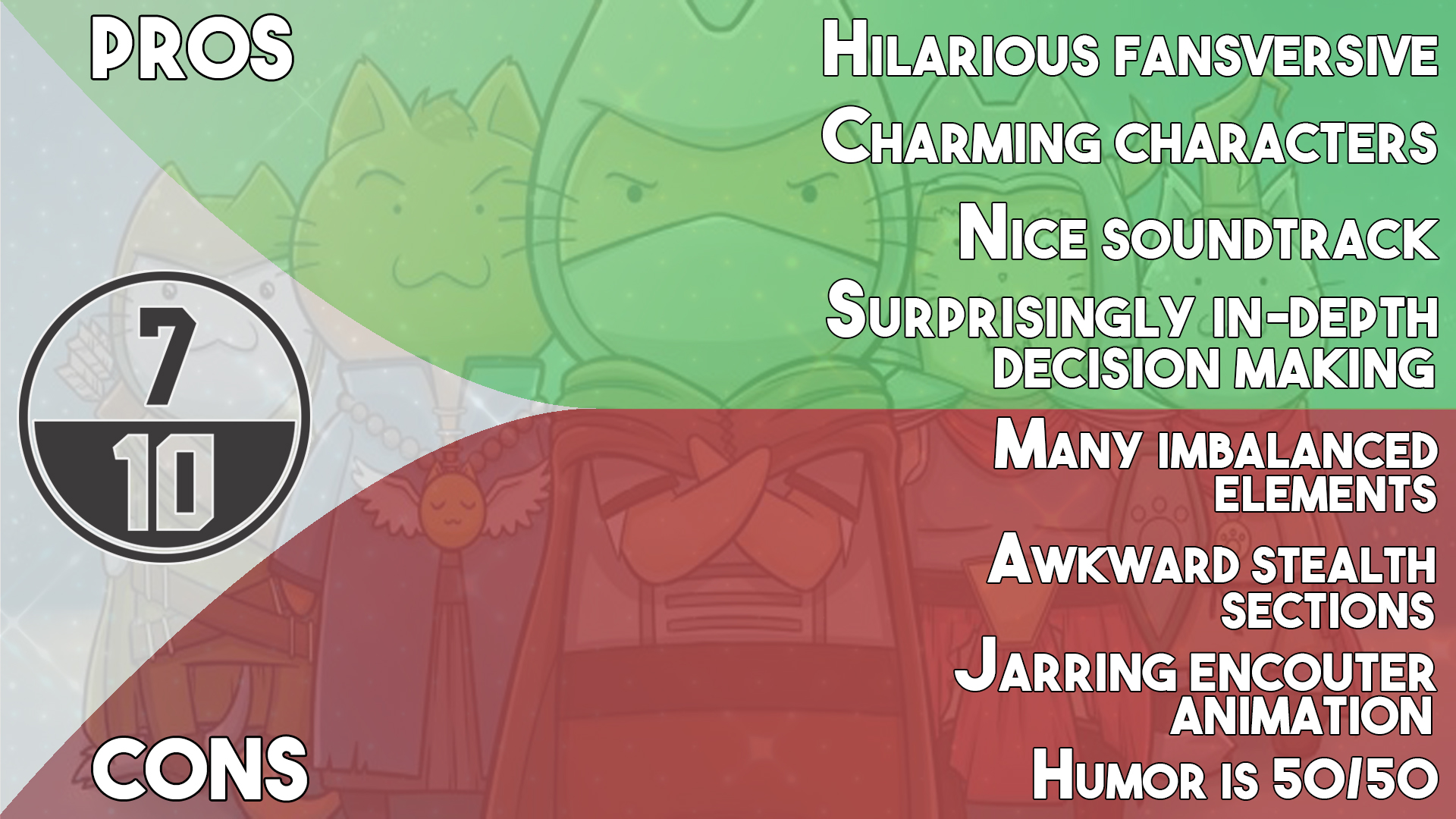 Ever since his first gaming experience with Wolfenstein 3D at 6 years old, Siddharth has fallen in love with games across many genres. He's especially fond of RPGs, puzzlers and platformers and you'll never see him NOT gush about his Top 3 favorite games: The World Ends With You, Borderlands 2 and Okami.
You might also like
Reviews
9.0

by Pratyush on March 18, 2020
Everyone has that one game sequel they consider impossible. Impossible not just in terms of existence from a publisher interest/funding standpoint, but also when it comes to raising the bar to a whole new level. Well, that is just what Ori And The Will Of [...]

by Zach Murphy on February 21, 2020
A blood-drenched meeting of the roguelike and hack & slash genres We’ve all been there, longing for a Star Wars game with combat to rival Jedi Academy and gore that matches some of the hack & slash genres best efforts. So many conversations have [...]

by Karan Negi on December 18, 2019
As someone who jumped on the Zelda bandwagon with the original OCARINA OF TIME, I’ve only been familiar with the series in all its incarnations in the third dimension. I’ve played and loved everything from WIND WAKER to BOTW, but titles like A LINK TO THE [...]
Comments
Leave a reply