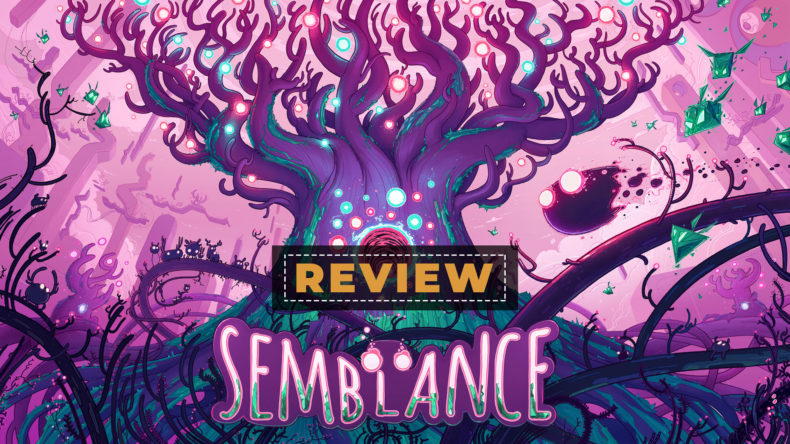 Semblance is an innovative platformer with deformable terrain, set in a beautiful minimalist world. It’s a game that asks, what if you could deform and reshape the world itself? Semblance takes the idea of a ‘platform’ in a platformer and turns it on its head.

8.5
Total Score
—
User Score
You have rated this
Full Review

BASICALLY IN THE WORDS OF THE DEVELOPERS:

Semblance is an innovative platformer with deformable terrain, set in a beautiful minimalist world. It’s a game that asks, what if you could deform and reshape the world itself? Semblance takes the idea of a ‘platform’ in a platformer and turns it on its head.

I am not sure if this analogy will work here (Or if it is even relevant), but if you have ever tried to create Michelangelo-esque sculptures from mashed potatoes by poking holes and twitching the edges “Oh just so finely”, this game pretty much induces that feeling. Playing as Squish, the player’s job is to remove the green crystallized infestation and turn everything back to squishy by solving puzzles through playing around with deform-able environment.

The malleability of the environment is the main attraction here which can create a whole lot of a mess when in the wrong hands, but the developers have included a simple “Reset Environment” button. It allows you to reset platforms within your immediate vicinity, letting the player start fresh rather than restarting the level.

By adding all these features, the environment becomes an extension of the player as well as the puzzle itself, hence allowing the game to spin standard mechanics in its own way. No longer does the player need a double jump to reach higher or lengthier sections while being equipped with just a single jump and a dash; a bump to a (relatively) darker platform allows the player to reach the desired platform. As the game progresses, which it does at a good pace, new mechanics and obstructions are introduced.

Initially, the puzzles are just about bending and moving platforms, allowing the player to acclimatize with how the game works and how platforms of various shapes move around when bumped. Then come the sections where Squish can’t use the dash ability in certain parts of the puzzles (Or rather parts of the map). Lazers that decimate Squish are also thrown in there along with some ‘light beams’ (For lack of a better term) that reform the deformed objects on contact (Which includes Squish as well) and propel the player in the direction of reformation.

Yes, Squish can change shape too. Though, there are just two alternate shapes he can take- the slender tall one or the longer short one. The taller version allows him to jump/dash higher while almost foregoing horizontal distance while the shorter longer one’s case is the vice versa. This opens up a lot of new possibilities where platforms are placed higher or at more distance to fit the desired purpose while also incorporating mid air changes to solve certain puzzles.

Progressing across levels and worlds, is masterfully eased on to the player for the most part and while I may be understating the difficulty of the game, the charm of the game lies in those “Eureka” moments when the realization of “DAMN! IT WAS SUPPOSED TO BE THIS WAY?!” dawns on the player. The challenge always seems to be JUST out of reach and thankfully, none of the puzzles require you to complete the preceding ones, enabling the player to move on to the next puzzle or even the next world if the current puzzle is too much for the brain.

I occasionally also felt that the game was designed this way, because I remember 2 instances where I moved on to the next puzzle and when I came back to the puzzle I was stuck at, the solution struck me almost immediately or it might just have been a refresh of perspective from my side.

Semblance is not a perfect game though in spite of having the creative edge. It might be just me, but it induced the same feeling that Light Fall induced in me- It feels like a tech demo. There is no denying that whatever the game presents is absolutely great, but there are quite a few missed opportunities when it comes to application of mechanics and that can be felt especially during the later stages of the game.

If you have a look at the prototype version of the game, it has even more mechanics. For example, the prototype build had intermediate shapes/sizes for Squish. So Squish had a size that was between the normal state and the tallest state which allowed him to jump a little higher than the normal one but not as high as the tallest one. This could have been used to vary the puzzles a lot and created quite a few more levels while including puzzles where the different thicknesses of Squish could be used as puzzle elements. If you want to see the prototype, head over HERE, GamesRadar+ has a video of the earlier version. I know I am sounding too demanding, since these mechanics and the addition of puzzles to fit these mechanics would have significantly bumped up the development costs. Hence, I really do hope that a second game is made which incorporates the shown mechanics.

The last section of the game changes tones dramatically, getting into the more platformer side of the puzzle platformer equation with lasers and crystals moving rapidly, just wanting the player to start spamming the dash button at the right moment (For the most part anyways).

From a story telling perspective, it is pretty much a standard story of Kryptonyte like infection which needs cleansing and is portrayed through paintings on walls that might be a bit off progression path. Last but not the least, the visual the sound department take the minimalist approach, making the game more about “Show, don’t speak”, which is actually true for the whole game considering that the game wants you to understand and experiment with everything.