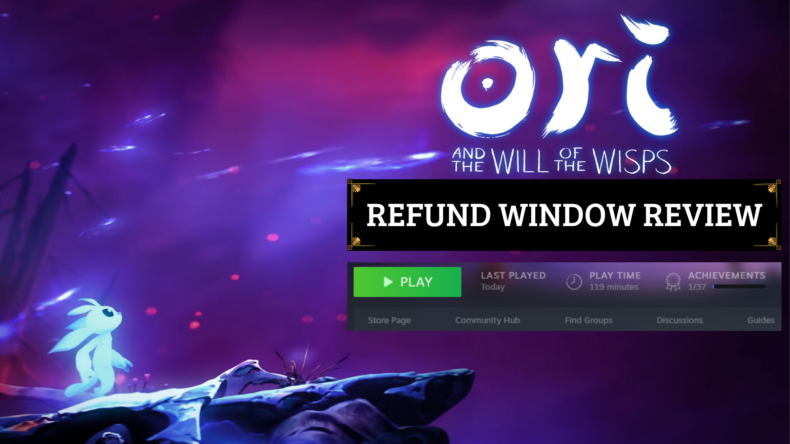 Steam certainly raised a few eyebrows when they introduced their refund policy a while back, but it’s honestly something gamers can’t live without at this point. Those on the fence about a certain game can just buy it, take it around for a drive and then refund it (including some conditions, of course). But again, not everyone has the time to sit through this patient process. With that in mind, our newest editorial section – the Refund Window Reviews – will detail exactly how your two hours of pre-refund playtime will enact so you, the player, have even more purchasing power. Now to begin, there couldn’t be a better game for our debut piece besides Microsoft’s latest entry in their beloved furry Metroidvania sequel, Ori & The Will Of The Wisps.

Right from the get-go, Ori & The Will Of The Wisps feels familiar yet different. In essence, it’s a mature, more confident rendition of Ori & The Blind Forest. The biggest touch of familiarity this sequel brings is that same urgency shepherding a subtle but powerful sense of immersion. All encased in a glowing, solid sense of game design. In a way, Wisps is a talented ventriloquist puppeteering the player, pulling the right strings at the right moments.

Like the innovative Bash ability (that for the first two hours is constantly teased via various environmental cues) returning from the original game to knock Ori into the air and then forward into countless brain-teasers that are eventually bested thanks to Ori’s pixel perfect movement, and then that satisfying crunch as his brand new spear whacks literal lights out an enemy encounter – every single frame (minus technical issues that will be discussed further) of gameplay can be felt as clear as a blast of wind on your face. It’s smooth, fluid, masterfully crafted and feels like an Oscar movie in motion: not a second feels filler or wasted, but most of all, it always remembers to keep the player at the center of it all.

It’s like that one mate that was the life of their friend circle, one that everybody loved for their charm and shyness. But despite those years that have passed, they’ve not just retained their magnetic wholesomeness but also shed their flaws, insecurities to be a better version of themselves, and thus an even closer friend.

This strengthened boldness is why it feels like a familiar face under a brand new mask. Obviously the devs at Moon Studios have had more experience, more third party titles to study since the Blind Forest. And the result is nothing short of awe-inspiring.

But what’s different? The graphics, the soundtrack, the movement, the gameplay – everything feels like an evolution of the previous game. Speaking of visuals? Gone are the heavenly green and blue overtones of the previous game – instead, they’re replaced with lazy and warm hues of yellows and oranges all the while retaining the ever-present purple streaks of looming darkness, mystery and evil. It not only retains the magic of the previous game but builds on it. Will of The Wisps also carries the original game’s trademark of knowing exactly how long to sustain any one aspect of the game- animation, story beats, level design, music, etc.

The new combat system definitely gives Will of The Wisps a much-needed facelift. No more are you relying on a ball of light floating in mid-air to automatically hit enemies in range. Ori needs to be precise in every attack. The three weapons I unlocked in my limited playtime were the sword for fast but weak attacks, the bow & arrow for ranged threats, and the bola-esque hammer weapon that staggers enemies while dealing huge damage. It all definitely feels more visceral this time around and is aided in its impact with some excellent animations and particle effects.

Directional inputs definitely add another layer to the combat, making it more involving. Combining all the traversal mechanics of Ori with the new weapons feels rewarding and fun. Though I did find myself using the hammer more often than not. Tweaking the combat system has also tilted the game into feeling better to play with a controller, unlike Blind Forest which felt equally comfortable on either a controller or a KB/M setup.

Currently, my only gripe with the game is its technical issues. Apparently not everyone is facing issues but some people are and I happen to be one of those unlucky few. There are quite a few stutters, whether it be the audio or the game straight up freezing for a few seconds, which is quite a shame. Let me clarify, none of it is game-breaking or even close. If this were any run of the mill AAA game with bland “realistic” art direction, generic music and a boring gameplay loop, then the stutters would have been bearable. But to have a piece of art that has a ton of effort and passion put into it stumble at the very last moment feels exactly like a tough math problem that went wrong in the last calculation.

My final verdict is that I am going to keep the game and not refund it. Its only flaw is that it needed maybe a couple of weeks more in QA testing and that will be fixed within a week or two with a couple of patches. To people who have not pulled the trigger on buying the game or have purchased it but haven’t gotten around to playing it, I would recommend maybe waiting a week or so to let the developers release patches that will improve performance. I do not say this because the game is buggy, but because it deserves to be played with absolutely 0 bugs.