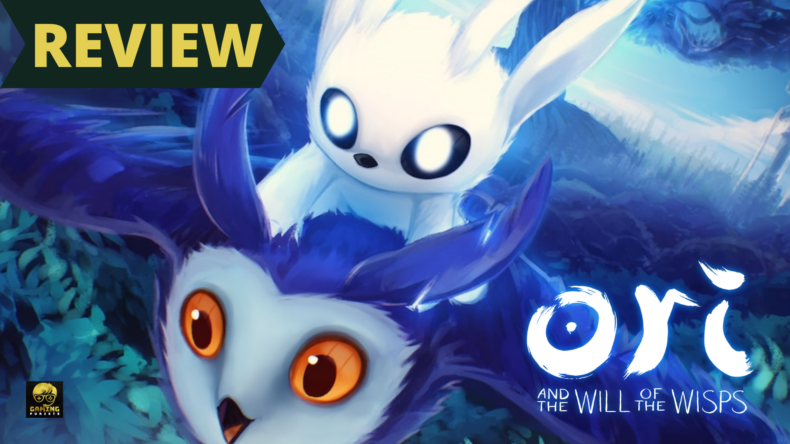 Ori And The Will Of The Wisps

Ori And The Will Of The Wisps is a more-than-perfect sequel to an already brilliant Blind Forest with a few technical speedbumps.

Everyone has that one game sequel they consider impossible. Impossible not just in terms of existence from a publisher interest/funding standpoint, but also when it comes to raising the bar to a whole new level. Well, that is just what Ori And The Will Of The Wisps achieves. Its E3 2018 announcement shocked worldwide fans of the original game – which by the way was an exhilarating, heart-touching journey through the perilous and magical forests of Nibel as a lithe, young tree guardian determined on restoring peace after it was taken over by a mysterious darkness.

As a Metroidvania game, it pays homage to not just classics like Nintendo’s Metroid series and Ubisoft’s Rayman franchise but lays down its own cards of wonder on the table to wow and amaze players. Does this much-anticipated sequel to the 2015 original manage to reach the heights set by it’s predecessor? Well, I have to bring news: it definitely does.

Each element of Ori And The Will Of The Wisps adheres to the basic principle of good storytelling at every waking moment – following the structure of having a beginning, middle, climax, and conclusion. Animations have just the right amount of delay between the build-up and the execution of each action. Music, gameplay and other minor elements of the game follow suit in a similar satisfying fashion. It is a quality that has been carried forward from Blind Forest only to be strengthened in the sequel with even better animations, music, mechanics, and gameplay.

As Ori surges through the new lands of Niwen, she becomes a direct expression of developers who WANT to show what they have made. Will of The Wisps basks in the glory of what made Blind Forest an incredible achievement of artistic brilliance while building upon it in meaningful ways. In this process, Moon Studios also manages to remove many of the little niggling flaws that peppered Blind Forest, the biggest of them being the combat. 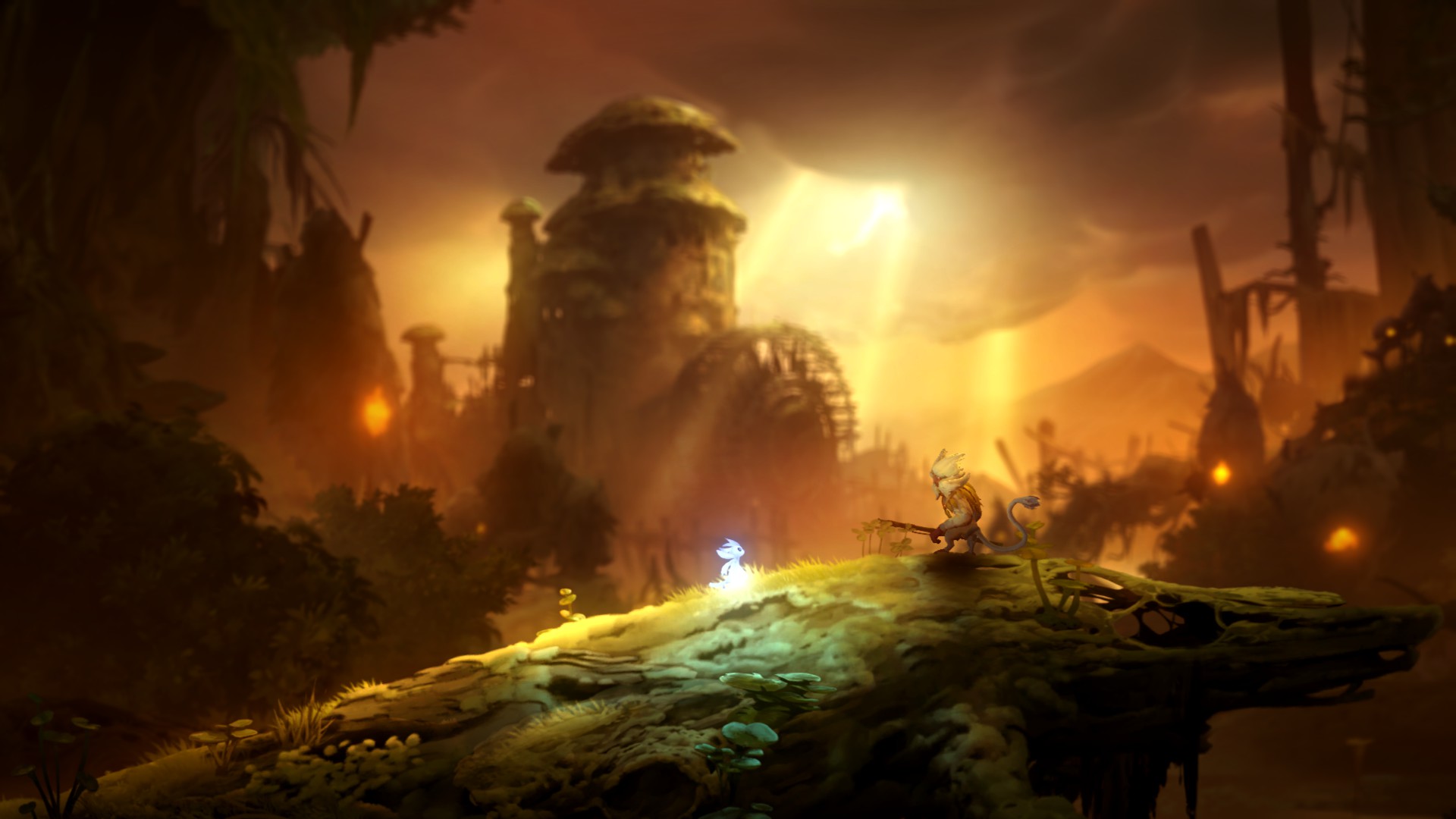 Talking about the combat, the involvement of the player has increased drastically. It is more in the player’s face than Blind Forest’s automated shock bursts. The sword (or rather the spirit saber) and the hammer form the duo of melee weapons available to Ori. A majority of Ori’s offensive abilities are also comprised of ranged solutions like the bow & arrow, spirit spear, fireball, etc.  Oddly enough, the ranged combat seems to subservient to the movement in a way. Whether it was a conscious design decision or not, most of the ranged abilities supplement the traversal system surprisingly well, almost like two long lost soul mates.

One might think that adding weapons to the game might shift the offensive focus in favor of the huge arsenal at Ori’s disposal. Moon Studios, being acutely aware of this possibility, have given Ori an even wider set of movement options that can be used as offensive measures as well. If combat takes two steps further from the last game, the traversal takes four steps forward. And that is quite a drastic improvement when you consider that the combat in the previous game was non-existent while the movement system was arguably already at the peak of the genre.

Just like the game’s mechanics, Ori too has “grown up” now. Fear of the unknown has turned into a sense of unexpected adventure. This is reflected in all the sequences, especially the set pieces, through Gareth Coker’s exquisitely composed music as the relatively chirpy and excited, upbeat tunes of the first game make way for relatively mature, deeper tones.

As expected from the sequel, Will of The Wisps abundantly provides players with challenges through its chase sequences which make a return from the original. The facelift to combat also opens a new path to tense boss fights, some of which have been masterfully fused with these heartpounding cat-and-mouse sequences to create segments where your skill with Ori’s combat systems as well as the new traversal mechanics are tested. 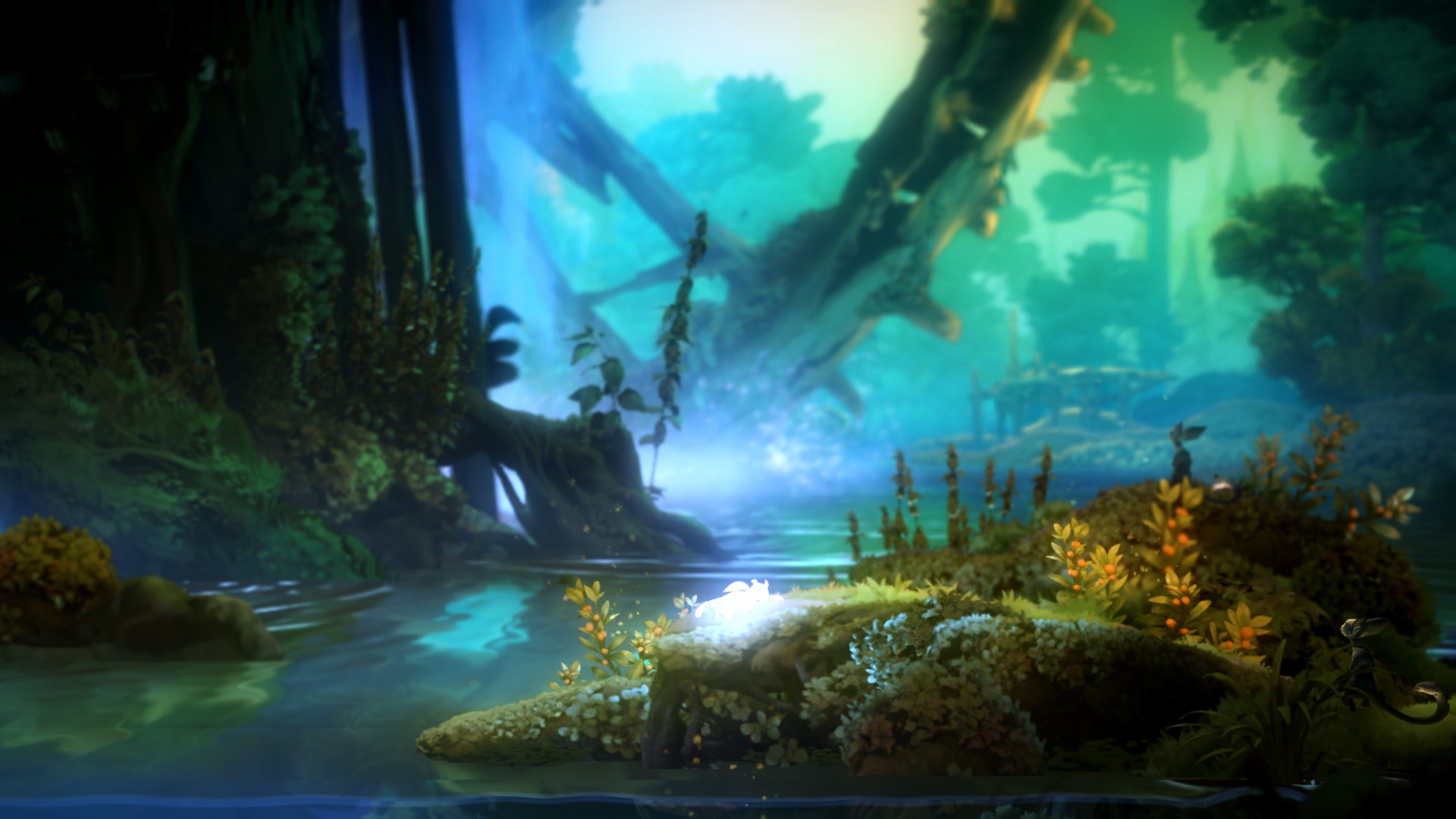 With a more fleshed out open world, populated by numerous NPCs and littered with many side quests, Ori manages to escape the tropes of open-world game design. It does this through a delicate balance of exquisite traversal design and involving side quests that don’t merely devolve into fetch quests. Wellspring Glades acts as a sort of central hub from where the story really starts unfolding and an area that acts as a base for upgrades that opens up as the game opens up.

It is surprising that the game takes about the same time as Blind Forest to complete in spite of feeling like it is set in a bigger more varied game world. Then again, the game offers some of the most impeccable and fluid movement mechanics ever seen in any title to date. It’s a deliciously and hearty full course meal, where the silky smooth animations are the appetizers, the rich atmosphere is the entree, the polished mechanics are the main course and the godly music is the final dessert.

Will of The Wisps provides an impressive arsenal of abilities for the player to experiment with, yet at the same time limits the player’s world interactivity that could be possible via these tools – a craving that would be quenched if provided with a larger, well-designed world. Compared to something like the interconnected and expansive hive of Hollow Knight where the abilities are few but the world design compels the player to utilize them to full effect, this game’s world is smaller, compact and focused. As a result, it’s unable to spread its wings; instead, it has to make do with limited applicability when it could be soaring the skies in a more ambitious, synergetic world design. 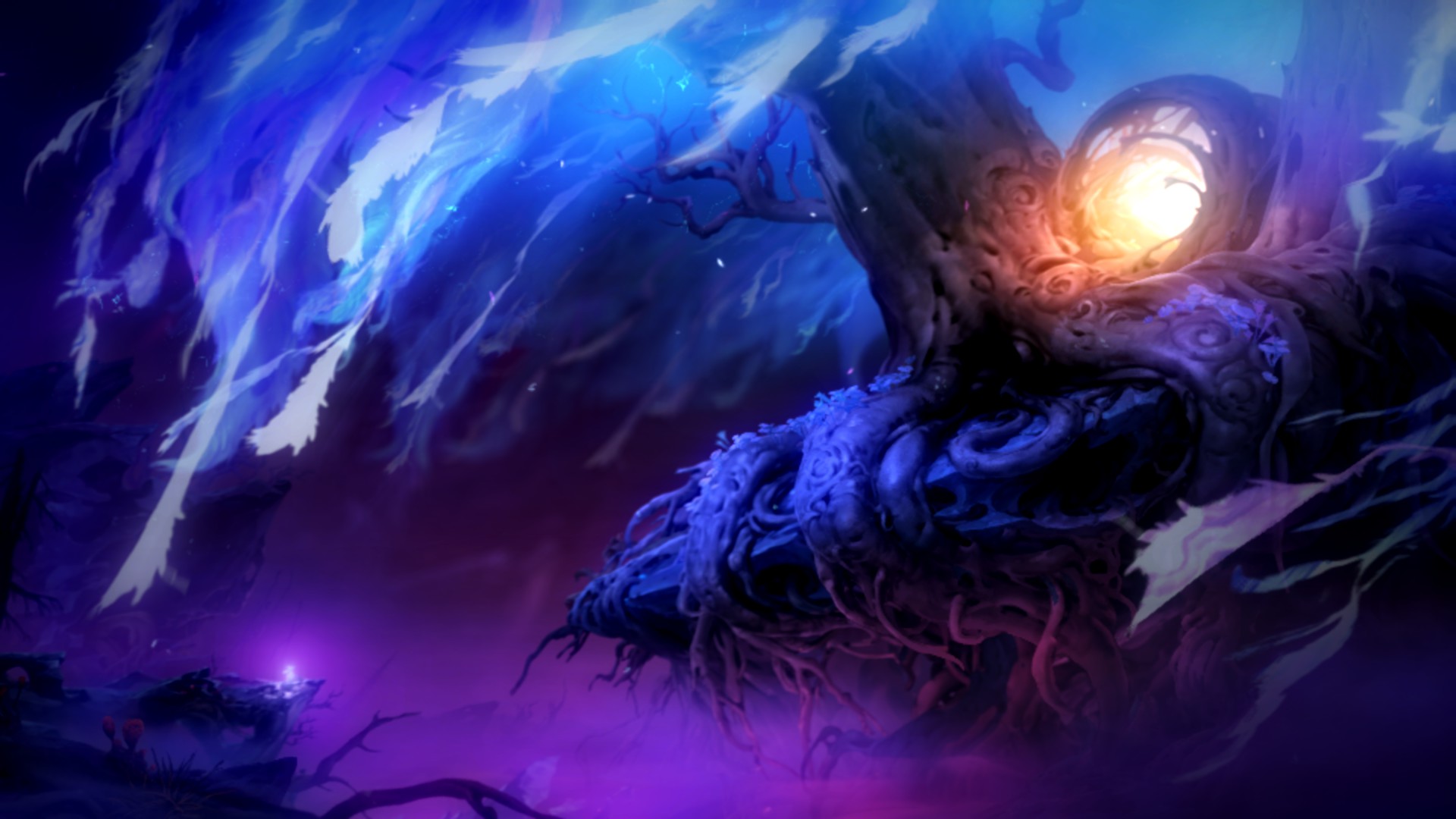 On the flip side, however, Niwel never feels like a chore to backtrack around in. By the 60-70% mark, Ori amasses enough abilities to flit across the map effortlessly. Yes, the fast travel system is available at a moment’s notice but just like Spiderman (PS4), I never felt like using it because of how fluid the movement is.

Smallest of gripes as it may be, the game never urges the player to use directional attacks despite providing the means to do so in spades. Yes, the basic aerial directional attacks come in handy for certain situations, but there is absolutely no threat in the game that can’t be put to rest with a well-timed/placed ground pound with the spirit hammer.

To my dismay, the soul link system has been abolished. While not a deal-breaker by any stretch, the soul link created a sense of risk vs reward that resulted in some tense circumstances. As much as Mr. Thomas Mahler may deny that the absence of Soul Link wasn’t missed by anyone, there is no refuting the fact that it played a considerable part in what made Blind Forest memorable. Being a huge fan of the previous game, all the memories of struggling through tough situations with low health in riskier areas came flooding in when the checkpoint system of Will Of The Wisps saved me from repeating long sections.

Through this omission, however, the developers have been able to focus on keeping the pace of the game up at all times. No longer do you have to worry about losing progress as the game provides ample checkpoints. This results in a less punishing experience while retaining the challenge that made the original game so rewarding to play.

Will of The Wisps draws direct inspiration from Hollow Knight, a modern Metroidvania classic, in some regards. Aside from the moment to moment combat, the shards in Ori And The Will Of The Wisps are quite similar to the charm/notch system of Hollow Knight where a limited number of slots allow for various builds. Following the thought process of making the game less punishing, players can switch shards on the fly without having to go to save points. It also borrows some world design elements from Hollow Knight in certain sections of the game.

As has been mentioned in our Refund Window Review of the game, Ori And The Will of the wisps runs into some minor technical issues and while they aren’t deal-breakers, this is the kind of game that absolutely deserves to be played. The only reason I am giving the game a 9 is because of the technical issues that I had to face with the game freezing up for more than a couple of seconds and the audio stutters drowning out the beautiful music of Gareth Coker. There were also times where the game bugged out while loading another area, something that annoyed me a lot since Ori disappeared into an invisible wall for a couple of seconds till the game loaded the textures. I did get stuck in the geometry once, such that I entered an area that I wasn’t supposed to.

Conclusively, Ori And The Will Of The Wisps has improved in unexpected ways. Even though it has a few technical hiccups, it’s an otherwise intact game – one that constantly surprises, impresses and magnetizes the player at nearly every step, proudly displaying its mechanical and fundamental gameplay evolution for everyone to see. And given how it is a true-blue sequel in every sense of the word, it absolutely deserves all bragging rights.

by Siddharth Patil on July 3, 2020
Before we start, let’s make one thing clear: Borderlands 3 wasn’t the “coming of the messiah” that everyone was hoping for. What could’ve been an epic entry in 2K’s popular looter-shooter franchise, more than just [...]

by Juste Rayge on June 15, 2020
FromSoftware is renowned for their bone-crushingly difficult Souls series. Yet they’re more than just a developer churning out Dark Souls games. The Japanese studio is also famous for making a myriad of mecha games such as Frame Gride, Armored Core, [...]

by Zach Murphy on February 21, 2020
A blood-drenched meeting of the roguelike and hack & slash genres We’ve all been there, longing for a Star Wars game with combat to rival Jedi Academy and gore that matches some of the hack & slash genres best efforts. So many conversations have [...]
Comments
Leave a reply