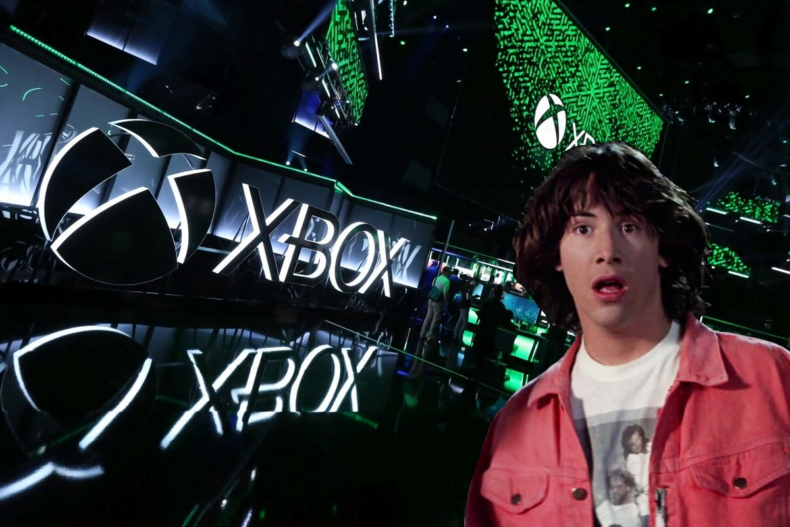 Microsoft, to cut short, just took care of the usual business. This conference was nowhere near as good as last years–to which it acted as just a footnote. The company made some bold moves and promises last year, which gamers loved. This year, all it did was remind them that they were being kept. This was both a good and bad thing, as it meant that nothing original or too exciting really happened. But hey, Keanu Reeves showed up, and that in itself is kind of a reward.

There were no real banging surprises as far as the game reveals go. Everything we got out of the conference was what we expected. Ori And The Will Of The Wisp release date? Check. Cyberpunk 2077 release date? Check. New Forza? Che…. Ok wait what is Lego DLC doing in Forza. Oh yes, a new game from the developers of Minecraft that uses the same (box)pixel art style but plays like an isometric RPG; a game reveal that got a deserved silent treatment. Halo: Infinite? We didn’t even get a gameplay reveal.

Ninja Theory’s new game, Bleeding Edge, (Which was already leaked) was ‘revealed’. Now, they don’t really have an excellent track record with divisive releases like Enslaved: An Odyssey To The West, Heavenly Sword, and the DmC reboot. Hellblade was decently received, but we aren’t holding our breaths for a studio rooted in Single Player suddenly making their way to multiplayer games right after coming under Microsoft’s wing. That aside, even the trailer looks crummy that is trying ‘too hard’. Saying that the game’s combat is being designed by the same person who designed DmC’s combat doesn’t exactly instill confidence.

Yes, the event had tons of indie games. A lot of them looked good. Some were a bit..weird. It’s hard to say much about them, because right now they seem more proof of concept and less product. Still, the announcements regarding the Xbox game pass will keep fans happy, and to be honest, provide a lot of genuine value to the players. Especially it being cross platform with PC. All in all, people can play a lot of good games without spending too much and that’s great.

Elden Ring, Tales Of Arise, Dragonball RPG all looked good–showing great signs of single player gaming being well and alive. Though I have gotten tired of the ‘Souls’ formula, I’m still curious about Elden Ring. As for Dragonball RPG–we’ll see. The franchise has a history of mediocre games, and while the trailer looked good–it just lacked the sheer impact of the beautiful, painstakingly calibrated visuals of Arc Systemworks’ Dragonball Fighter Z. This one looked much less alive, in my opinion. Tales of Arise on the other hand, looks fantastic. The anime style looks eye-poppingly good in the new engine, and the game transitioning to an Action RPG is par with current trends. Still, the tales games are usually great, and this looks to be another excellent one.

Gears 5 had a weird showcasing. I have no idea why they started with that trailer of the main character wriggling around in one position. The Billie Eilish song choice made it even weirder. The Coalition has promised us that this one will be much more ambitious–so we’ll see. The multiplayer beta is supposed to go up in September (?). I’m wondering if it’ll just be ‘Gears Battle Royale’. As someone who liked the first three games, but thinks that the series has said all it had to say–I’m neither excited not skeptical about this one. If it’s fun, I’ll play it. Hey, it looks great, at least.

The new Battletoads looked…a bit off to me. The art style (just like the forthcoming Streets of Rage 4) looks outsourced and generic. This is a massive departure from the amazingly expressive visuals and detailed sprite work of the old SNES game. While I’m happy classic beat ups are coming back–these games deserve a lot more TLC than what I feel they’re being given. The newer developers need to understand the core appeal of these games. As a fan of the original, I’m still excited to play it, but I’m keeping my expectations tempered.

And who could not mention the beginning of the end of the generation? Microsoft announced their next Xbox as Project Scarlet. The name might just be a placeholder, but they sure as hell didn’t make it impressive. What Microsoft used to end the biggest conference of the year, Sony did in a simple interview. Technical jargon like 8k resolution and a dreamy 120 fps aside, we heard the guys at Xbox say the same things Sony said earlier this year- small loading times, the most powerful console they ever made yadda yadda. Following that reveal, they released yet another cinematic trailer for Halo Infinite which doesn’t help their case. Gives us some gameplay already. The new Halo trailer, if that was in-engine footage (Which it looked like), doesn’t really seem like something next-gen. Not to mention, why should a reasonably sane person be excited for…Halo of all things after a decade of ‘non-excitement’. The series has become like your distant uncle who keeps showing up for your birthday parties, despite never being invited to.

Not trying to be all be negative here, Cyberpunk 2077’s release date was a surprise more likely due to Keanu Reeves than the actual release date. There were rumors already floating around that Cyberpunk 2077 would have a Q2 2020 release date and with Keanu being his usual self, the excitement around the game just intensified manifold(More on that in an upcoming article). The reveal of the release date of Ori And The Will Of The Wisp and Dying Light 2 just made it clear that our wallets are going to be dead by Q1/Q2.

All in all, Microsoft’s conference felt tedious, slow and uninspired to say the least; in spite of having acquired all those studios last year. It could be that many projects are in development for Scarlet seeing that games aren’t easy to make, but with what I would like to call(And everyone else will agree to this), a pretty mediocre generation, it is hard to envision Microsoft having mind-blowing E3 conferences.