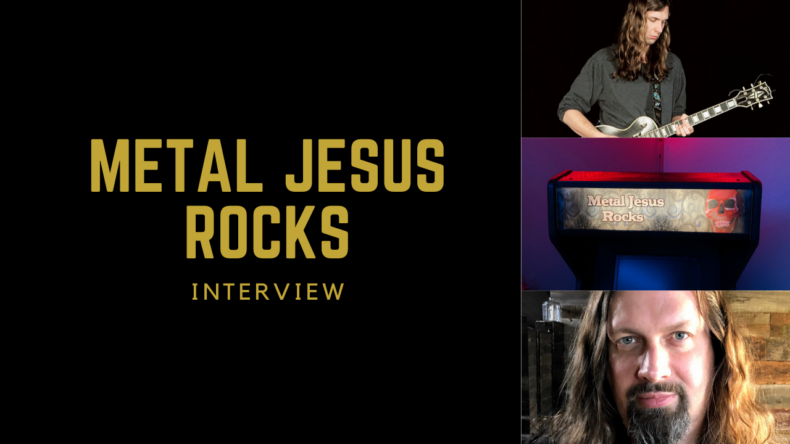 There are some content creators who have made huge waves within the retro gaming community, and there is no doubt that Metal Jesus Rocks is one of them. An ex-Sierra On-Line employee with a background in the industry, it’s no surprise that he has amassed well enough 700 thousand subscribers through his videos on hidden gems, console buying guides and his genuine enthusiasm for all things gaming. He and his MJR Crew have managed to form somewhat of an empire on YouTube and are showing no signs of slowing down. I’d like to thank MJR for taking the time out of his busy schedule to talk with me.

What’s your earliest gaming memory?
I really loved playing the Atari 2600 with my cousin back in the early 80’s. His bedroom had wood panelling and he had a ton of classic AC/DC vinyl records. We would pop Atari cartridges in all day and rock out pretending we were rock stars. Those were great times!

What made you decide to start creating content on YouTube?
I have been a lover of shooting and editing video since I was a kid, and now I can fulfil that dream on YouTube. Getting to talk about video games and music is AMAZING.

How do you manage to balance your gaming and content creation with day-to-day responsibilities?
I do both at the same time. I capture 99% of the footage used in my videos, so I’m always playing games for fun and work.

What would you consider to be your go-to genre?
I do love arcade racing games!

Are there any genres you actively dislike?
I don’t play a lot of professional sports games. I don’t dislike that genre, but it doesn’t interest me in the slightest.

You’ve got two hours to yourself to game, which console do you switch on?
Probably right now it would be the Xbox One X to play some Control by Remedy, or the Switch for some Enter the Gungeon.

If you had to convince someone to start collecting for your favourite console what would you say?
Don’t collect what *I* like, but instead collect what you are passionate about. There is no point in acquiring a stack of games you have no interest in playing. Instead, go for what interests you. That said, I recommend you start with the PS2 – so many great games and genres.

What’s the rarest game/system in your collection?
Probably the Nintendo64 DD USA prototype add-on. As far as I know, there is only one of them in the world. Nintendo was throwing it out when they moved corporate HQ here in the Seattle area, and the person I got it from rescued it from the garbage.

What’s the weirdest game/system in your collection?
See the answer above! I mean, a floppy disk drive for the N64!? But it runs in English instead of Japanese…however because of copyright protection, it will only run US region games…of which…NONE came out! LOL

Another answer would be my one-off Atari 2600 Walkman prototype. It’s an FPGA-based Atari in the shape of a Sony Walkman made by a gentleman on AtariAge. Absolutely BRILLIANT and works flawlessly.

How did you meet the Metal Jesus Crew?
This would take paragraphs because each story is different… but I would summarize and say that all of them are active members of the awesome Seattle area retro gaming scene.
Some I met at expos, some at retro gaming stores and some through friends of friends. It’s a very fun community and most people are active on Facebook/Twitter.

What’s the craziest fan experience you’ve had?
I get recognized a lot when out and about the town, in restaurants, grocery stores etc. It’s primarily because I’m so tall, the long hair, the rock t-shirts and I tend to stand out so if they watch my videos, people will often say Hi.
The craziest fan experience was this girl who emailed me asking if she could come live with me and that I could potentially adopt her. I’m pretty sure she was serious. I was flattered, but no. My wife and I are happy living with our two dogs and two cats.

If you had to pick just one, which lesser-known game would you recommend, and why?
Britney Spears Dance Beat for the PS2. DUH!
No… probably I would say either Splashdown: Rides Gone Wild or Kim Possible: What’s the Switch on PS2. The first is an excellent arcade racing game, and Kim Possible is a fantastic 2.5D platforming game køb viagra. Check ‘em out!

Craving some more content like this or just want to read about something interesting? You can click HERE to go to ObscuReviews Archives and delve deep into games you didn’t know existed.