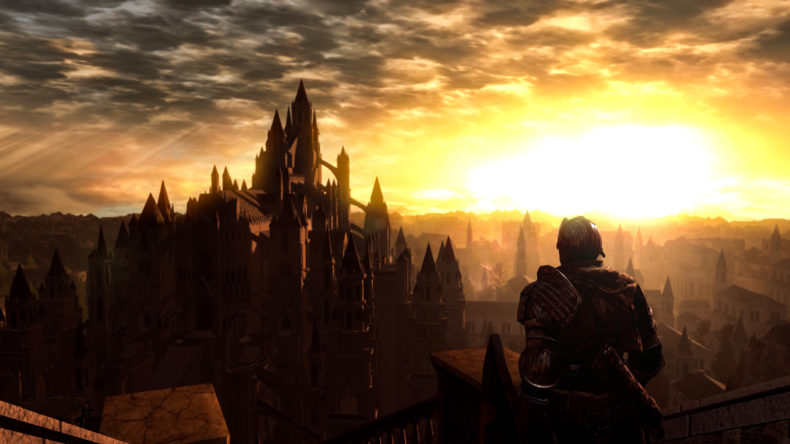 If there’s one title that’s been the most iconic over the last 10 years — and the subject of the most analysis, debate and speculation — it’s From Software’s DARK SOULS. It’s as singular minded a game ever made in the last 10 years, and that is the reason why it inspires obsessive compulsive devotion in a way, that only a few games ever do. It’s many things — a mettle-tetsing challenge, a thoughtful and introspective journey, an interactive dark fantasy world and an enigmatic, mysterious puzzle that both ignites the imagination, and haunts the inquisitive essence of adventurous gamers everywhere.

Most of all though, it’s an amazing game– featuring one of the most amazing gameworlds ever concieved– and filled with amazing moments from top to bottom. Narrowing it down was really hard, but in celebration of DARK SOULS: REMASTERED for current gen, we decided to do it anyway. Without further ado:

If you’re anything like us, you probably started the game with the master key. And before you went around going about your merry way –you probably managed to fool around here for a bit –and got murdered by ghosts repeatedly. Still, the real fun begins in the latter half of the game, where you fully explore the place, get murdered by ghosts repeatedly again, and then finally crack the code by flooding the place. It’s really cathartic, and makes you conquer a place that seemed bafflingly uncrackable before. Plus, fighting the gone-hollow version of the ‘Crestfallen Warrior’ here is nice too. So is meeting the mysterious healer in the middle of the area.

This area is pretty much par for the course for Souls fans. Darkroot Garden is large and interconnected to many areas. It’s also the most concentrated areas in the entire game. It houses multiple memorable bosses like Sif and the Moonlit Butterfly, a giant hydra, a strange petrified blacksmith, a surprisingly large amount of enemy types, princess Dusk of Oolacile and Havel the Rock himself. It is also a great place to farm souls, and Poison Moss. In short, you’ll be in Darkroot Garden a lot. Which is great because it’s one of the best areas in the entire game. It’s fun to explore in general, but it’s also fun to just come back here time to time, to take a break and explore it’s various nooks and crannies that yield some cool pickups. Also, it’s just atmospheric as hell and a blast to get lost into.

The early portions of Dark Souls can be really rough, especially for those that jumped straight in, and didn’t play Demons’ Souls. The whole trek from the Undead Burg to the Undead Parish is filled with a variety of tough-as-nails challenges. It’s a stressful, hectic ride to reach that bonfire. After which though, you’re made to undergo to fight your way towards the church rooftop, where two Gargoyle statues come to life to kick your ass over and over again. This is the first major hurdle in the game, and to be quite honest –the point where people either get over the learning curve, or quit altogether. The feeling of achieving victory is momentous , and so is the  calm, vertigo-inducing climb to ring the bell afterwards. It only gets harder from there.

Dark Souls has some of the best NPC’s in any game ever. Solaire’s popularity is well-established – but Siegmeyer of Catarina is just about as memorable. Also memorable are Laurtec, The Princes of Oolacile, Patches(returning from Demons Souls), Logan and well to be honest…almost everybody. These never feel like just programs of code– they feel like living, breathing, dynamic personalities that have their own inner lives and motivations (which to be frank they do). One of the best parts of the game is when you often meet them on and off during your back-and-forth journey through the game’s hub– The Firelink Shrine. They often also have the habit of appearing and disappearing — giving the impression that they themselves are also on their own futile, isolated treks through Lordran.

One of the reasons why Dark Souls has such an enigmatic reputation – is that some of its best, and most jaw-dropping areas are completely optional, and sometimes hidden. This sort of thing is not what any AAA developer would dare even try these days, but then again From Software is no ordinary developer. You can visit this mysterious, enigmatic lake, that houses increasingly bizarre enemies, another giant hydra and at the far corner, a giant goddamn dragon (weren’t they supposed to be dead? Oh well…). It’s a place unlike any other we’ve seen in games – like the Mariana Trench of Lordran. Later on in the game, you can see that it catch a glimpse of it on the far end of the Horizon, whilst traversing through the Tomb of the Giants. Making your jaw drop once again.

This is perhaps the pinnacle of Dark Souls’ atmosphere. The entire Duke’s archives is an incredibly atmospheric  and mysterious area. But it’s clear that all the crystals encased surroundings, and ominous atmosphere is building to something. There clearly is something amiss. As it turns out, that feeling is correct. It is the layer of Seath the Scaleless (Hence all the crystals surrounding the area). This is flat-out one of the most wondrous, jaw-dropping areas you’ll ever set foot on, with crystal golems, invisible pathways, multiple moonlit butterflies (as if only one in the darkroot garden wasn’t amazing enough) and much more. I’ve always equated this sequence as Dark Souls’ version of Ripley finding the Alien Queen’s layer in ALIENS — that is going somewhere no sane person who loves his/her life is ever supposed to go.

No need to say much here. The first 30 times you die here, will make you wonder whether this is a joke, or whether you will ever be able to complete the game. After the next 20 deaths, when you finally defeat these two bastards, it feels like you’ve achieved a major milestone in your life. It’s one of the most dramatic moments in video games period. And while I’ve always thought that From Soft took it a little bit too far here (Were those annoying giant knights before the boss area really necessary?), there no denying the power of this moment. When both of these assholes are down, and you get to bask in the majestic silence of the boss room–it genuinely feels like you’ve turned a major corner — and that’s because you have.

3. Falling into the Abyss:

Lordran consistently surprises you with its scope and scale. Just when you think you’ve seen all it has to offer, it throws another curve-ball at you. While almost all areas in the game have had some semblance to being an actual physical place, this one, well –we’re not really sure what exactly it is. Is is the edge of time? of space? somewhere in between? Regardless, the Four Kings boss fight here is great, and the way you access this place– by equipping the ring from Sif– and falling down the seemingly endless void to finally reach the bottom makes for an awesome moment. Not to mention this bizarre, seemingly disconnected place further adds to the enigmatic nature of Dark Souls.

You first laying eyes on Gwynewere after beating Smough+ Ornstein is a surreal sight, but later on in the game you may come across the ‘Darkmoon Seance Ring’– which tells another strange tale– and one that’s polar opposite to what you just saw. Once you figure it out and shoot an arrow into her illusion- the real truth (and enemy) reveals itself. Needless to say, the entire majestic golden outgrounds, corridors and majestic vistas go dark– and before you get out you have to fight the NPC’s who have turned hostile. The fight against Dark Sun Gwyndolin (aka the true manipulator of the events) is insane. What’s even more insane is that it’s completely optional. One of the biggest secrets of the game is hidden in plain sight, and the developers don’t even care if you find it or not. Things like this are why this game managed to achieve the legendary status it did.

1. Kiln of the First Flame:

Your final steps towards bringing your Dark Souls journey to an end, are also its most memorable. Most games tend to offer something extremely dramatic (sometimes overdramatic) to give players the impression of completing something monumental. Dark Souls does quite the opposite. It offers the calm after the storm. It’s just a long, lonely trek with the few remaining Black Knights that guard Gwyn. There’s nothing much stopping you from killing him and either ‘linking the fire’ or ‘bringing about the age of the dark’. And even though the fight is challenging, there’s a strong sense of melancholy both before and during it. With the lonely trek and the downbeat music. It’s a bold choice to end a bold game, and regardless of whatever ending you choose, perfectly drives home the central message of Dark Souls — everything eventually ends, and you’re all alone for the most part.

What are some of your favourite moments from this outstanding game? Let us know in the comments below.

by Juste Rayge on June 1, 2020
Hack and slash games used to pop up frequently on the PS2. One game tried to defy another with its mechanics, story and the combo system. It was surely a generation teeming with so many titles. There was quite a variety of games to pick from Devil May [...]
comments
Leave a reply