by Karan Negi on December 18, 2019
125
0
previous article
The Legacy of Bushido Blade - Square's One-Hit Kill Fighter
next article
The Live Action Condemned Prequel You Had No Idea Existed 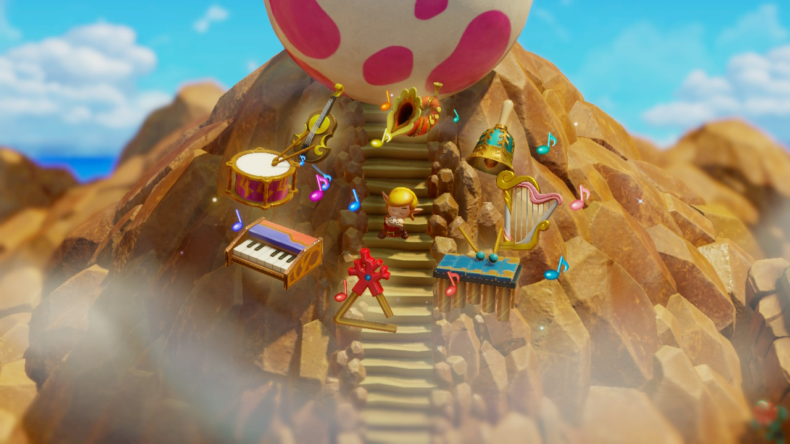 As someone who jumped on the Zelda bandwagon with the original OCARINA OF TIME, I’ve only been familiar with the series in all its incarnations in the third dimension. I’ve played and loved everything from WIND WAKER to BOTW, but titles like A LINK TO THE PAST, LINK BETWEEN WORLDS, SPIRIT TRACKS etc etc. meant nothing to me. Not that I didn’t hear an extraordinary amount of praise for them, it’s just I couldn’t be bothered. My usual narrow-mindedness prevented me from seeing what exactly a 2D version of this particular formula would have to offer–especially if it had been done so well in all third dimensions.

The remake of the fan-favorite LINK’S AWAKENING for the Nintendo Switch forced me to finally break my resistance and take my first forays into the 2D Zeldas, in order to see what the fuss was all about. Not to mention, satisfy my curiosity about its ‘cult status’ among the fanbase. Needless to say, I wasn’t disappointed–as the game lived up to its very high pedigree and then some.

While it’s easy to dismiss Zelda ‘stories’ as something not as worthy of discussion as the rest of the elements of the series, LINK’S AWAKENING has a few tricks up its sleeve to differentiate it from the pack. It isn’t based in Hyrule and does not possess the usual three-way dynamic of Link-Zelda-Ganon that the series is known for. In fact, the game goes the other way around completely–by being inspired by David Lynch’s TWIN PEAKS (just like so many other games). The way in which it emulates some of that show’s off-beat tone and idiosyncratic characters are a sight to behold. Just like that show, the game manages to switch tones effortlessly. It goes from weird, to funny, to mysterious and eventually… (yes)… kind of emotional. Not to mention, there is a lot of stuff regarding…owls. I had always heard about the David Lynch-esque nature of the game’s plot, but it was a delight to not only see it in action but also being pulled off so well (minus all the sex, nudity and violence, which here is replaced by the usual Nintendo charm). People looking for a more ‘traditional’ Zelda might be taken aback, but those looking for something different are going to adore it. The story also has a few big reveals near the end, that helps set it apart from almost every other Zelda game–before or after. In short, it’s easy to see why the title has always stood apart in a series which already has so many unique titles.

This is no-frills, classic, 2D Zelda. I never played the original game (as mentioned before), but it’s common knowledge that the game has more or less kept almost the entire structure intact. This means that players will be subject to responsive controls, exquisite level design, superbly laid-out progression, logical puzzles and consistently entertaining locations and exploration. Things that most players aren’t usually subjected to these days, in modern games. I’m not sure whether I’m praising game design-thinking, or ripping hard on the lack of quality in modern times. In fact, I’m probably doing both. Either way, LINK’S AWAKENING acts as an expert example of how much fun games truly can be, when they don’t share any ‘cinematic’ ambitions or try and pretend to be things they aren’t. LINK’S AWAKENING is as ‘gamey’ as they come (with a capital ‘G’), and this is something that feels like a lost art these days. As someone who is often jaded and bored by games these days, I was flabbergasted that I was actually managing to enjoy playing a game for extended periods of time. 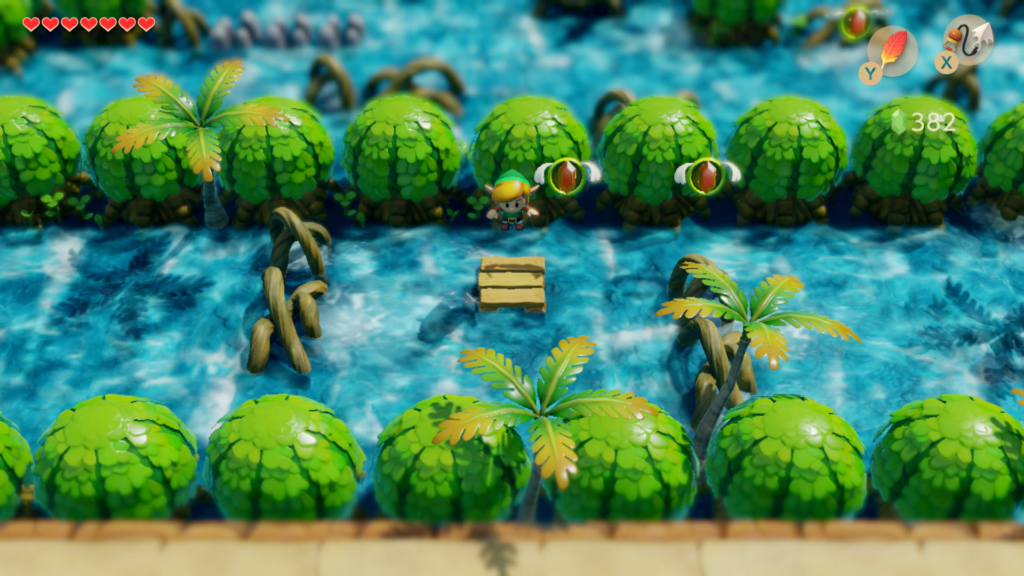 The game also differentiated itself gameplay-wise from 3D Zeldas, by having dedicated jumping and dashing abilities (that you can acquire). While ideally it’s easy to imagine both these abilities being a nuisance and backward-design, they are anything but that. The way the game forces you to make clever usage of them to do everything from unlock shortcuts, cross large gaps and do all sorts of acrobatic maneuver will bring a smile to jaded modern gamers. The fact that someone could think of all this stuff almost 20 years ago is definitively a very charming reminder. It is also a wake-up call for lazy, modern designers to buck their game up. Since, it is making them look behind the times in comparison. 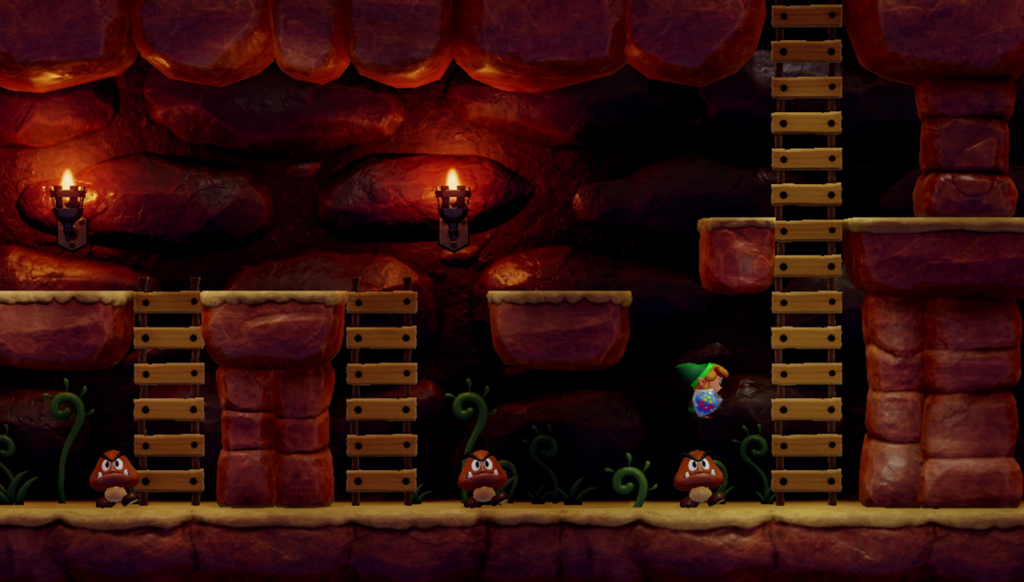 You got a bit of Mario in my Zelda (Image Credits: Zelda Wiki)

The game is chock filled with boss encounters. While some of them are a bit on the annoying side, almost all of them are otherwise great. They are also often weird, contorted and have really twisted character design–fitting in right with the off-beat tone of the rest of the game. One of the more amusing things also is seeing REAL LIFE assets from Mario games in the mix. Link will (no joke) take on goombas, piranha plants, shy-guys, chain chomp and boos (among others). While this was probably done to save costs back in the day (coupled with the the GBA’s limited power), nowadays it manages to acquire its own weird charm that adds to the tone of the game. 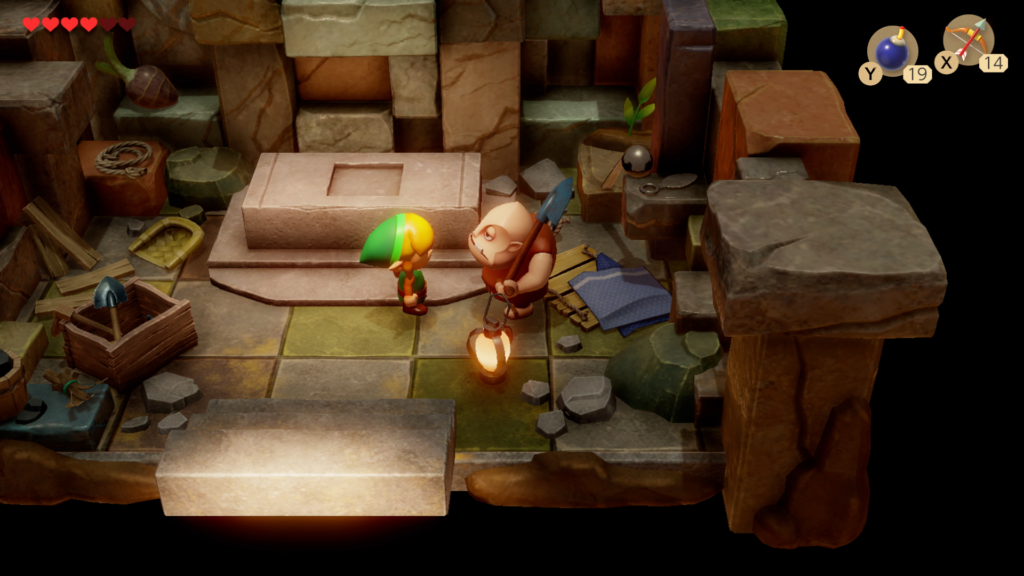 The world design is excellent. Aside from the main quest, there is plenty to discover for those who are inclined so. Loads of hidden pathways, NPCs, heart pieces and upgrades lie in wait. The more new abilities you discover, the more the world opens up to you. And it’s this addictive loop that gets inside the mind of the player and tempts him/her to just leave things behind for a while and explore the strange, twisted island–aka the star of the show. It’s expertly-constructed, has tons of variety (and weirdness) and opens up to you gradually throughout the game in a way that brings back the joy of exploration/ game design magic as only a true-blue old-school game can. Fans who enjoyed the lack of hand-holding in exploration in say, the FROMSOFT games are sure to relish this one. As the game leaves a LOT for the player to figure out for him/her self–by using in-game hints, common sense, memory and pure exploration–on where to go next in the main path.

While design-wise, the game is usually A++, there are a few chinks that occasionally mar the experience. Some elements simply HAVEN’T aged that well. Youll come across an occasional annoying boss, a confounding puzzle with broken logic (yes, there are those) and really obscure pathway that you’ll swear was impossible to discover without a guide or YouTube. While this keeps the “old-schoolness” intact for old-school fans, it is bound to be jarring for newcomers. It’s not a big deal, as these things are minor–but people should be aware.

If there’s an area where the game manages to break your heart, it’s this one. Technically, Link’s Awakening is a really-good looking update of a 20-year-old. However, it’s performance (both docked and handheld) is many times, completely abysmal. There’s no way to sugarcoat it, or spins words around it– the game runs like total garbage. Both in docked and handheld, framerate dips are more frequent than you’d expect. The game in general runs for the most part between 30-60 fps. All of that would be fine, if the inconsistent performance wouldn’t be SO obvious. You don’t need an fps counter on the top left of the screen to tell how poorly and inconsistently the game runs. Not to mention there is significant lag every time you switch between an indoor/outdoor area. Considering that the Switch has proven itself to be a far more capable piece of hardware than initially thought (It runs DOOM and THE WITCHER 3 FFS), and ran BREATH OF THE WILD, a far more technically demanding Zelda game than this one, we can’t help but put the blame for this directly on Nintendo’s shoulder. There is no reason why a remake of a 20-year old game should run this poorly. While the game is very playable, it still feels sloppy and rushed. 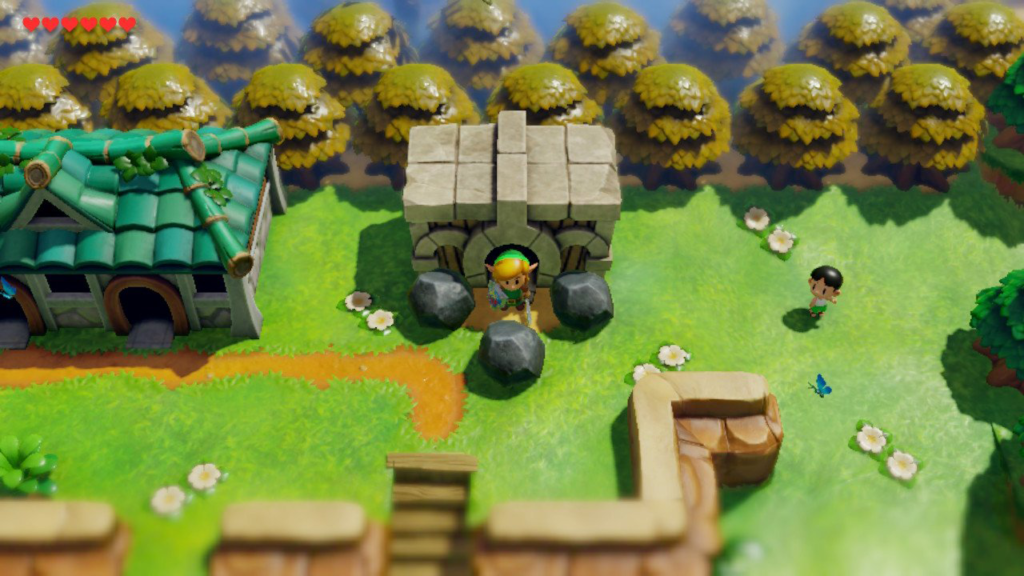 LINK’S AWAKENING offers a great, faithful and absolutely charming remake of one of the best Gameboy games of its era, offering old-school gamers a most pleasant nostalgia trip, and more modern ones a reminder on why old games were so great. And for die-hard Zelda fans, it is an absolute no-brainer.

Playing games as a child became a lifelong obsession for Karan that somehow he’s managed to sustain to his adulthood. Enjoys Adult, ‘grown man’ responsibilities as much as the next person, but enjoys play old PC shooters, immersive sims and JRPG’s more.
You might also like
Reviews