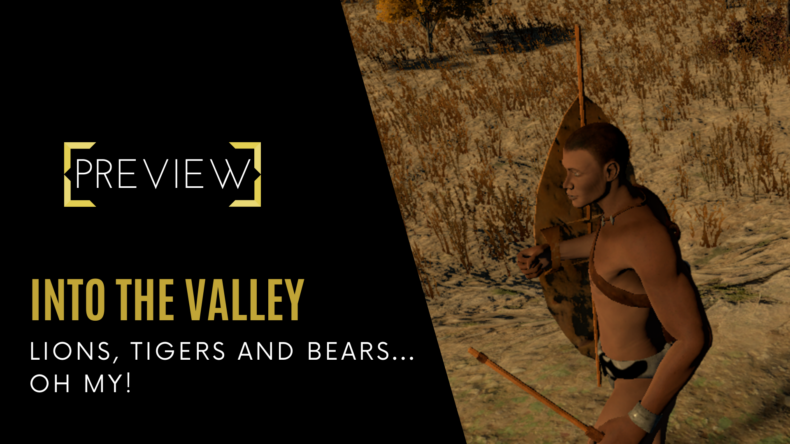 We don’t really see a lot of games play into the detective genre that much outside of the Hidden Object market. This is mostly due to the steady decline of point and click and text adventures, and the fact that non-established IP’s tend to fare not-so-well in the current market. Sure, we’ve seen a few investigative games here and there, L.A. Noire, The Council, Oblivion’s Canvas the Castle questline, but as a whole these are few and far between. Irish one-man studio One Little Serf have been carefully crafting a brand-new experience in an attempt to creep into this corner of the market, and I was given the opportunity to play it ahead of its full release in early March.

Into the Valley has been in development for the past five years, with One Little Serf’s sole developer, Helgard de Barros, having learnt the ropes of Unity just two years prior. Having originally worked in film animation and modelling, de Barros had to re-evaluate what to do with his life after the 2008 crash, and thus began to learn how to create video games. Inspired by his early life in South Africa, and after seeing a gap in the market for titles set in the continent, Helgard set out to make a traditional survival RPG set in 3000BC, just before the creation of the pyramids. After witnessing the survival RPG genre explode in popularity, it was obvious that a change was needed in order to stand out from the pack, and de Barros chose to mould detective elements into the project due to this. It was conceived as a Deus Ex set in BC, but Into the Valley shifted quite a bit from this concept throughout its development cycle.

The game opens with you at your home, encased in the aftermath of the kidnapping of your daughter by slave traders. Your family need you to bring her home, they are relying on you to rescue her. You pick up some supplies, and begin your journey through the valleys. You’ll encounter many friendly NPC’s along your quest, and they tend to be nice enough to offer your character assistance, directions or supplies.

You’ll also encounter various enemy types during your travels, that mostly take the form of animals. There’s nothing quite like trying to run through a large canyon and being gored by a rhinoceros, or swimming through a stream only to be nibbled to death by a shark or crushed in between the jaws of a nasty hippopotamus. Human enemies are also present in Into the Valley, with mercenaries and tribesmen armed to the teeth with swords, spears and bows. Some of the more protected areas in the game are incredibly difficult to access early on due to their high level of security, but once you learn the ropes of the combat, it becomes a fair bit easier.

Weaponry is quite interesting in One Little Serf’s title, with a true standout being the throwing spears. As an enemy unit approaches you, you can throw spears at them to wound them before striking them down with a close-quarters weapon once they get within range. Outside of Far Cry Primal, this is not something I see a lot, and it’s very well implemented here in Into the Valley. The spears also come in handy when gathering resources, as you’ll need to hit animals with them in order to slow them when hunting.

In addition to hunting animals for their meat, you’ll also need to keep an eye on your hydration levels, vegetable intake and happiness. Whilst some are quite self-explanatory, happiness is slightly different. In order to stay happy, you’ll need to chat with friendly NPC’s, and not steal or kill from innocents. If any of these meters drop below a certain point, it’s your curtain call. You’ll struggle with this at points, as sometimes stealing can be your only means of survival. If you’re starving for food and can’t travel too far before dying of starvation, the slab of cooked meat on a friendly strangers table might be your golden ticket to continuing, and some characters have great items on displayed in their homes that you just can’t help but pinch. This happened early on when I found a strong spear, and I then had to kill the owner with it for good measure.

The real draw to Into the Valley, at least for me, were the beautiful environments. Watching the sun rise over a canyon, shimmering against the current of a stream is amazing. I stood there often watching my resource meters drain as the sun rose, and I found the cover of sunset to be a fantastic asset as I tried to search fortresses for my daughter. Graphically, the game looks fantastic for a one-man project, and it’s absolutely worth picking the game up for this reason alone.

Being from a one-man studio however, leaves the game in somewhat of a difficult position, as the game is not perfect. There is a steep learning curve when you begin the game, and combat can feel a little clunky at times. One Little Serf have exhibited a lot of ideas however, and the talent is absolutely there for future projects to turn out stronger and with more polish. I know I will be keeping my eye on the studio to see what comes next.

Into the Valley is worth picking up for fans of survival games, but it’s not the sort of game I can recommend for everyone. It’s got some very interesting ideas and some beautiful landscapes, but the lack of polish might be off-putting to some. If you’re looking for an experience with a unique setting and some very uncommon enemy types, One Little Serf’s debut project will be right up your valley.

Into the Valley is available for purchase on March 2nd, be sure to pick up a copy on Steam.

What's your reaction?
LOL
0%
Cheers
0%
What!?
0%
Meh...
0%
Sad
0%
RAGE!
0%
Editorials, Indie Exploration
Into The ValleyPC
Into The Valley, PC
About the Author
Zach Murphy