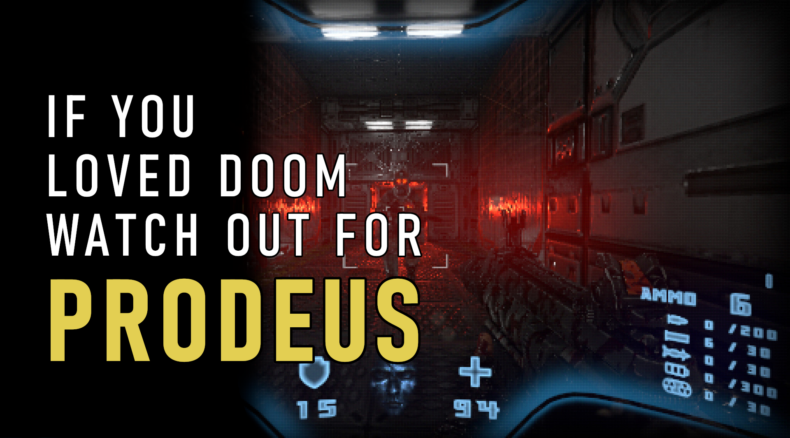 Old school shooter fans have been spoilt for choice this past couple of years. Since the reboot of Doom about 4 years ago, we have seen quite a few FPS titles in the indie space harkening back to the design philosophy of a bygone era. Notable names that get thrown around often include Dusk, Amid Evil, Maximum Action, Ion Fury etc, and each of these succeeds in making their ancestors proud. Joining their ranks is the new kid on the block: Prodeus – developed by Bounding Box Software and published by Humble Bundle.

In what essentially looks like indie Doom, Prodeus does little to stray away from the core formula that these “boomer shooters” have established. The players still move at the speed of a runaway truck, and in a good way. They still use the shotgun almost like a melee weapon against foes, with that familiar “in your face” mantra old-school shooters were known for. There are even hunts for keys hidden around a level. But most of all, the player still feels like an unstoppable juggernaut reveling in violence.

Now, that’s not a mark against it given the fact that I and many others derive unfeigned joy from the raw blood-fueled nature of such games. It is exactly the kind of game where cracking of the knuckles meets the gnashing of the teeth as you focus on spilling the guts of everything that moves.

Prodeus doesn’t shy away from the fact that it is clearly inspired by Doom. Heck, even the ‘D’ in the logo of “Prodeus”  somewhat borrows from the font in Doom’s logo. In all seriousness though, the 12-minute trailer that was released last year shows off the developers’ take on Doom’s enemies like the Cacodemon, Imps and a few others whilst also emphasizing the testosterokinetic carnage, maintaining the excessive gore, fast-paced movement and punchy guns.

It also takes to heart the map design of modern Doom, featuring a fully 3D map that can be zoomed in considerably and displays even more details like health and ammo pick-ups besides the more unnecessary splashes of crimson red claret that the players leave in their wake. Prodeus also implements some modern mechanics that are quite contrasting to the intended design motives such as the reload and iron sights but thankfully, from the trailers at least, they don’t seem to ruin the pacing of the game.

Based on the latest videos on the developer’s YouTube channel, there are some really unique weapons in the works. The Plexus and Arch Rail definitely stand out in that regard. Whilst the Plexus feels like a mix between the Plasma Rifle and Ballista’s Destroyer Blade mod, the Arch rail feels like something straight out of Terminator, shooting electricity bolts that bounce off of enemies to nearby enemies whilst staggering them. Essentially it can be used as a method to control the crowd as well as the pacing of the game.

And if you think we are going to forget that the composer of this game is Andrew Hushult, the person behind the hauntingly atmospheric of Dusk, you are so wrong.

How it turns out, in the end, will be decided primarily on the basis of the level and enemy design because the base is solid and the groundwork has been laid. Now it is all about execution. Prodeus is planned for release in the summer of 2020. You can find more information on Steam or its official page here.

IndiExploration is a series of regular articles where we look at upcoming indie games that interest the team here at Gaming Purists.