How The Devil May Cry Games Pulled Me In 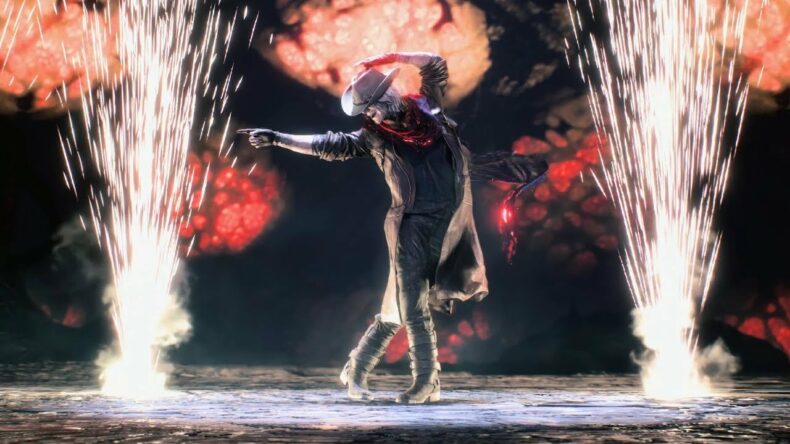 The lukewarm year of 2019 has almost come to a close, with more than a handful of hit or miss gaming experiences that either blew away gamers or were pretty hard flops… Yet the only one that I keep going back to is none other than Capcom‘s modernized-yet-old-skool, Devil May Cry 5.

According to fans, the wait for the latest DMC installment was torturous; 11 years without a sequel to a game that not only defined a genre but even after all this time, stands atop every other game that it inspired or was inspired by. DMC5’s trailer sent every person who loved video games into a frenzy. More than a decade later, an icon of gaming was returning after being dragged through the mud *cough* DmC *cough*.

DMC5’s reveal trailer brought with it all the cheesiness that was popular in the early 2000s and felt gamey for all the right reasons. Add to that, the persistence of my colleagues that the DMC games (and Ninja Gaiden) were must play action titles and their sarcastic jabs at me for having only played the (shitty) reboot; I relented. Before the release of DMC5, I went back and completed DMC3 and 4, only missing out on DMC1 because it kept crashing on my system (and 2 because that was in a, uhhh “league” of its own).

I started with DMC4 because it was supposedly the more noob-friendly  entry in the franchise which became clear as soon as I got to control Dante mid-way through the game. Nero, the first protagonist of the game, while being quite a bit similar to Dante in terms of his basic moveset, was clearly made keeping in mind the modern audience as well as newcomers to the franchise. With the overpowering buster arm and contextual attacks, Nero felt like a middle ground of all the switchable styles at Dante’s disposal. No trickster? Nero had buster grab to close down those distances. No gunslinger? Nero’s gun could be charged up for massive damage. No swordmaster? Nero had a sword that could be revved up like a motorcycle (Why? Because DMC) to increase damage output. Nero was easy enough to act as a crutch for beginners but had enough systems for people who were hungry for depth. Juggling Ex-Act, Max Act, DT Invulnerability, Shuffle Cancel etc together ain’t a cakewalk (Yes YouTube really showed how far behind I was).

The game encouraged experimentation through small indirect nudges. The buster arm was multidimensional and could be used for attack, defense or even counter-attacks. Those flying swords that could be grabbed using the buster arm during Agnus’ first boss fight just paved the way for Credo’s lance attack in a later boss fight. DMC4 also rewarded the player for finding openings in enemies. The buster arm could not be spammed on bosses; either the enemy had an opening or the player needed to create one. This point was only emphasized by the decreasing number of openings that the bosses allowed the player as the game progressed.

The second half of the game couldn’t be more polarizing. Getting to terms with Dante’s combat after getting accustomed to Nero was a bit of a climb, but the sheer breadth and depth of his moveset made that uphill battle worth it. With his diverse weaponry and style switching, the moves became harder to keep a track of. Rebellion was the easy one, but once Dante was fully decked with the Gilgamesh, Lucifer, Yamato, AND PANDORA, Dante’s capabilities felt like an industrial washing machine.

If there were any complaints that I had with the game, it had to be the obviously unfinished second half and lack of enemy design. The stink of rushing an incomplete game to market was strong when I realized that I had to basically replay the first half of the game in reverse as Dante. What a shame really. DMC4 had and probably still has the most comprehensive combat system in any action game to date.

DMC3 was truly where I fell for the series and boy did I crash!! Dante being introduced from the start was in itself a plus point, but the whole game was just something else- the story, structure, pacing, characters, enemy design, boss design, music, level design, everything formed such a beautiful cohesive whole that by the time I came face to face with Vergil for the first time, I was completely engrossed in the game. Not having played DMC2 (Only having heard of its legendary status), I could tell that the developers wanted to prove a point, wanted to make a good game, wanted to throw everything out there. The lack of such motivation was made apparent with DMC4 since the start. When did Dante pole dance in DMC4? When did he ride enemies as if they were skateboards? Where were the genuinely evolving boss fights? I mean Cerberus, Chariot/Geryon, Agni & Rudra, Nevan, Doppelganger, Arkham/Jester AND OBVIOUSLY Vergil, I remember almost every boss fight from DMC3, even their order.

The narrative and mechanical implications that went along with these bosses stay a benchmark for video game storytelling to this day. Seeing Vergil defeat Hell Vanguard after having struggled against him and then repeat the same with Beowolf were perfect examples of how to integrate storytelling into gameplay. Acquiring new weapons from each boss battle was also a huge bonus that kept me wanting to push on. The last third of the game was un-droppable. At that point, I was having too much fun experimenting with the combat and the levels got weirder. Remember chapter 18? The chessboard?

Having played DMC4 before 3, the style system felt a tad bit restrictive because the game didn’t allow the change of styles or weapons on the fly, but hey, there were two extra styles to play around with- Quicksilver and Doppelganger, both very different from the rest in their applicability and utility. DMC3 was only shackled by the chains of its time of release. Back in 2005, the style/weapon switching was probably not possible due to the hardware limitations of the PS2 or maybe it was that the bevy of enemy design that would be needed to accommodate switching of styles would require much more horsepower than the PS2 could handle.

I can’t fully state how much I enjoyed these games that released more than a decade ago. It’s easy to get lost while playing DMC- initially, I was lost in how little I could do without committing to all the mechanics; once I got the hang of things, I got lost in the number of combo possibilities. The amount of gameplay depth that both DMC3 and 4 offer are unparalleled (Apart from maybe the Ninja Gaiden franchise) and are what I would call, evergreen games, especially DMC4 SE (And of course DMC5) on the PC with the addition of Legendary Dark Knight difficulty and mods. It has been appropriately nicknamed- Anime action choreography simulator by people. Any combat scenario can be as creative as the player wants it to be; an aspect of the game I simply couldn’t let go of.

by Juste Rayge on June 6, 2020
Looking back, the Dreamcast’s ambition was nothing short of impressive for its time. It was the only console that strived strongly to port some of the best PC games back then to its dearest fans. Some of these games will forever remain obscure to [...]

by Zach Murphy on June 4, 2020
A run, jump and slash adventure from the brilliant minds that brought you Etrom: The Astral Essence.  Usually when a game is cancelled, that’s it for the project. Sure, sometimes canned titles are snatched up and finished by other developers or leaked [...]
Comments
Leave a reply