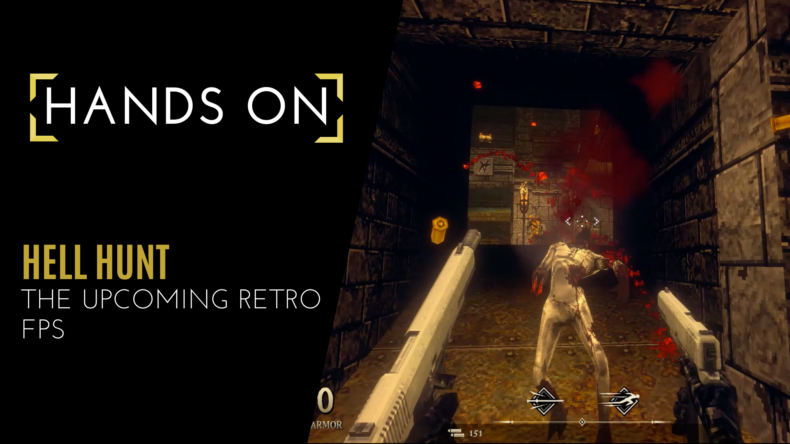 Of all the settings currently running amok in the new wave of retro-style shooters, Hell is one hell of a popular choice. Hell Hunt takes the demonic theme and runs with it, tossing a myriad of miscellaneous body parts along the player’s path, and popping in some mood lighting. The developer at T19 Games was nice enough to let me try the game out before the demo goes live on Itch at the end of the week (May 15th), and I loved every balls-to-the-wall minute of it.

Inspired by genre giants such as Duke Nukem 3D and the first two Quake games, Hell Hunt is the debut project from T19 Games. The solo developer behind the project wants you to feel unstoppable, and to bask in the charm of the retro stylings of the FPS. Whilst we have seen plenty of titles that have claimed to be classic era shooters, Hell Hunt really runs with the concept, ushering in tropes like secret areas, no health regeneration and key cards.

Dipping their toes deeper into the pool of nostalgia, T19 Games have also enlisted the iconic super shotgun into their arsenal of baddie-blasting goodness. In the demo, the player has access to five different weapons, dual katanas, dual pistols, a pump-action shotgun, a double-barreled “super” shotgun and a revolver.  Each weapon is an absolute joy to use, and the dual katanas can also be thrown at enemies, on a cool-down meter – expect lots of crudely-sliced limbs and impaled body parts with these babies. The dual pistols also play brilliantly, as they are often not implemented very well in other games due to wishes of realism and the sacrifice of fun, the pistols aim as one, and can take down even the stronger enemies with enough bullets. Even when all your ammo is spent and you only have your katana at hand, no enemy takes too long to kill – Hell Hunt is a game that wants you to be constantly moving and progressing – and if you’re not having fun, you’re just not playing it right! 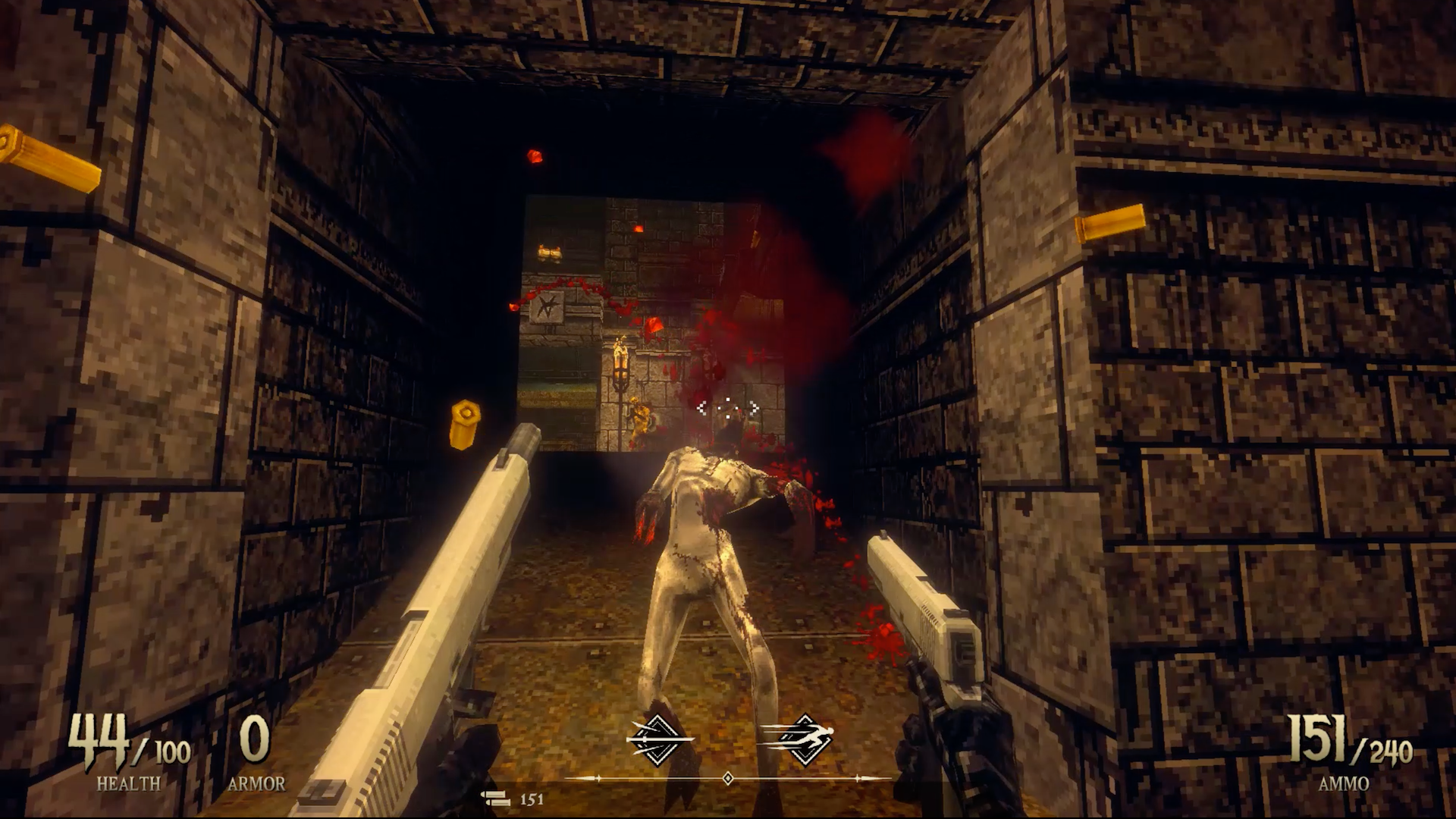 Another strong emphasis of the project is gore. Blood, gibs and more body parts get smeared across the hellscape as you madly blast more and more chunks out of your foes. By the time you finish clearing a room, you won’t be able to tread anywhere without getting blood on your new shoes. As you blast the heads off of the hellish demons, Hell Hunt enters a bullet time mode that allows you to crush your enemies with pinpoint accuracy whilst feeling like a total badass, there’s a lot to love here.

Hell Hunt has an old-school, low-poly art style that’ll immediately draw in fans of the original Quake, and a setting that will appeal to Hexen players everywhere. You’ll come across dingy, medieval-esque environments with prison cells and various puzzles to keep you busy. This is blended together with elevator shafts and demonic scenery to make locations teem with identity. For a game that wears its inspirations on its sleeve, it still feels very much its own, which is very uncommon in today’s market. Hidden in its levels are ammunition, room keys and health packs – and you’ll no doubt enjoy purposefully heading the wrong way at a T-Junction just to make sure you find all the best stuff, it’s just like going into a cave in the Elder Scrolls – the best stuff is always off the beaten path. 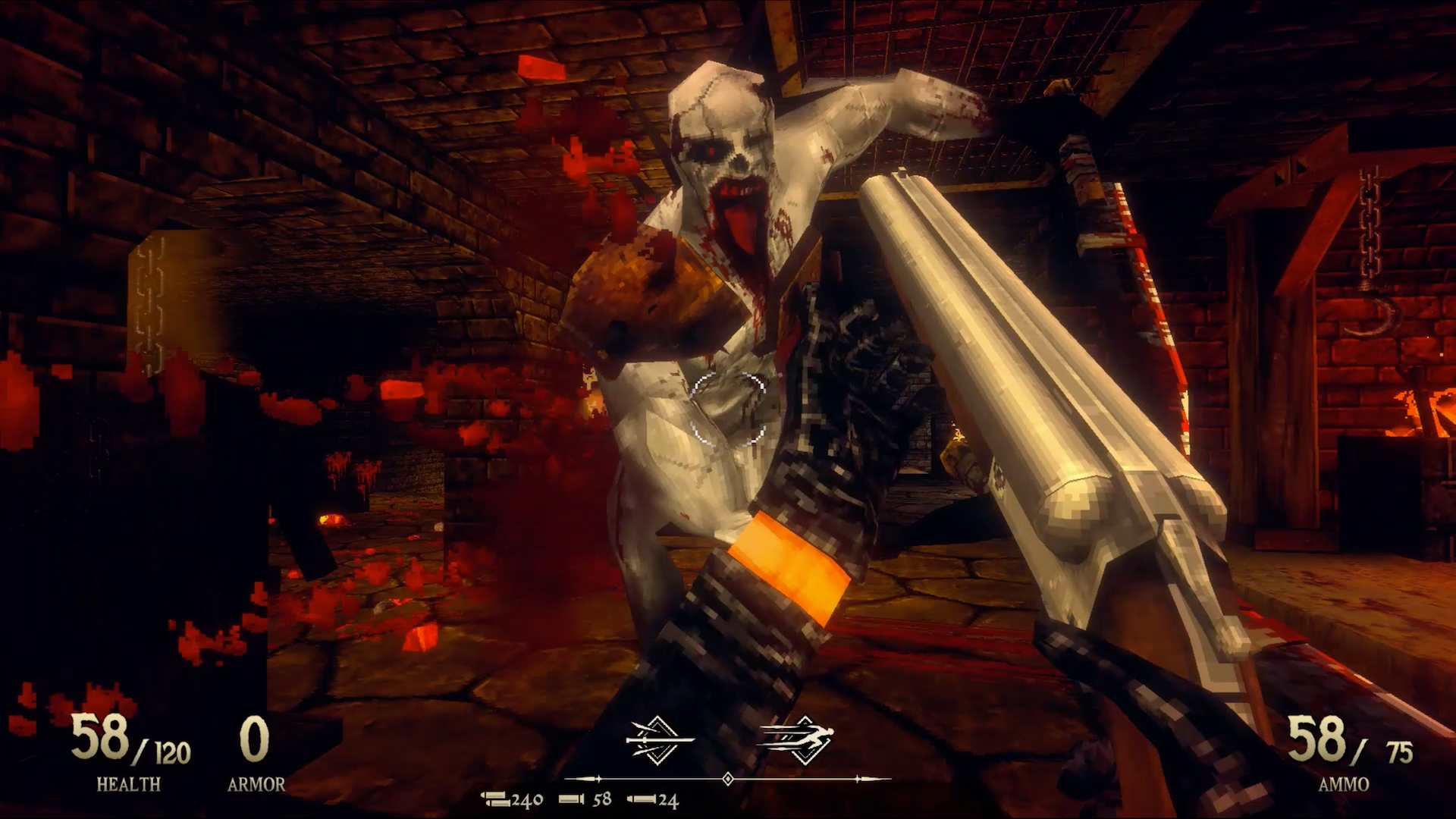 The demo will last you a fair chunk of time, as its set across two levels. The second level is a maze of tunnels, dungeons and teleports that really takes a good orienteer to make it through. The amount of content on offer here is fantastic for the admission price of nothing, and I’m excited to see whether the future levels will be of a similar length, giving the game a good weight. There have been a couple of instances of promising projects not being long enough in recent memory, and I really hope that Hell Hunt doesn’t fall into that trap.

T19 Games’ game is a real blast from the past, and if we can expect to see more projects like this in the future, we are in for one hell of a ride. With innovative retro titles like Hellver, Shrine II and Diluvian on the horizon, there is no telling when this nostalgia train is slowing down – I hope it’s never. There’s currently no firm release date on the full project yet, but make sure to follow the T19 Studios on Twitter to stay updated.