by Karan Negi on January 12, 2021
34
0
previous article
Games Of The Year 2020: Hades - To Hell And Back
next article
Monster Hunter Rise: Demo Impressions 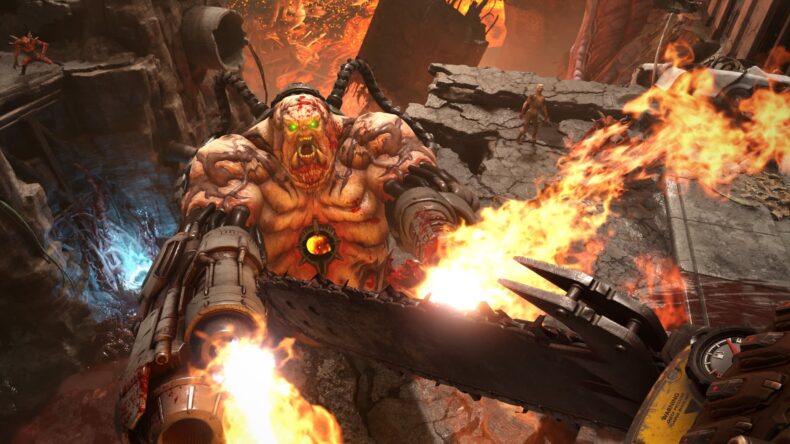 Back in 2016, ID Software’s reboot of their flagship series offered a tetanus shot to the increasing malaise of the FPS genre–and to its own franchise. Coming out of nowhere, the game managed to ‘glory-kill’ (see what I did?) the shambling, softened walking corpse that was the modern FPS blueprint in one giant swoop. Eliminating almost every negative, backward traits it had picked up in the last two decades or so, and recalling the elements of the past to take the genre forward.

Flashforward to the sequel in 2020, and it didn’t quite manage the same feat. But that’s only because it didn’t need to. You can’t solve the same problem twice. The goal this time was to fulfill the last bits of potential in the franchise and deliver an overall value package that not only shames the competition but takes the super shotgun to their face and blows it into bloody chunks.

And yet, DOOM Eternal went even beyond that.

It cranked the gameplay, level design, variety, and pacing up to 11. It delivered one of the best, most varied, most satisfying shooter campaigns in recent memory. It provided about three times the content on disk on launch day, that most AAA games provide after a year worth of updates. It provided a stunning technical showcase with silky smooth 60fps gameplay across all platforms, top notch-optimization, fantastic visuals and art direction. It paid off more than 20 years of fanservice in ways both subtle and unsubtle. It successfully built on the lore and canon of the franchise. It provided some of the most cathartic gaming moments of the entire year–and some of its most demanding challenges. It forced players to ‘git gud’ all the while having an insane amount of fun. To top it all, it featured one of the best soundtracks of the year–and easily one of the best switch ports in history. And then it did even more things.

I could go on and on, but there’s no need to. DOOM: Eternal has lodged itself as the undisputed king of the modern FPS in the AAA space (only Half Life: Alyx can possibly hope to compete, but we haven’t played that one yet). It is easily also one of the best overall shooters around, and an urgent reminder to the rest of the AAA industry that if they don’t constantly raise their game–they’ll be as obsolete as the many hellspawn that the Doomslayer murders on a regular basis.