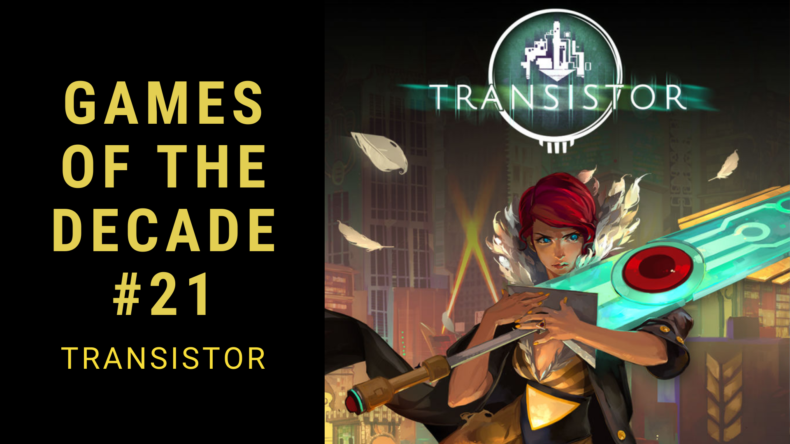 It’s a widely accepted consensus that video game opinions are subjective…. Which is true for the most part. However, one such claim I feel safe putting forward as an objective truth is this: indie developer Supergiant Games are one of the finest studios in the industry, boasting true talent with not even one mediocre title in their portfolio. Credit where it’s due.

All of their titles are very clearly passion projects, with a knack for quality presentation, tight gameplay, masterful audio, pristine polish, and an overall consumer-friendly stance- mighty impressive for an indie studio consisting of just two dozen people.

While I have gushed about Transistor before on this site, here’s a second opportunity to talk about it, more specifically about why it’s a generation-defining title for me. Leaving the intricacies of the game itself to the aforementioned article, I’ll just be brief: as a video game, it’s TRULY unique, and this isn’t you can say about many games out there. What’s amazing is the staggering amount of effort put into making the virtual and desolate world of Cloudbank feel ALIVE and its handful of citizens, HUMAN… The world-building is simply impeccable; whatever it throws at you is so meticulously crafted, that it’s hard not to be engrossed by it. It hooks the player in, from start to finish, presenting a superbly acted and written plot, wonderful characters and a stellar turn-based/real-time hybrid combat – all at once, another successful highlight that’s a rarity these days. That’s what makes this indie gem rise above it’s AAA, big-budget peers. An unforgettable experience without a shred of doubt.

Transistor is a love letter to gaming, and to gamers. And I understand that certain elements of the game might feel underwhelming or even off-putting to people accustomed to the fat pocketed AAA titles… Well that’s art for you. And to quote Rainbow Rowell: “Art wasn’t supposed to look nice; it was supposed to make you feel something” – although to be obvious,  the art does look very nice too.