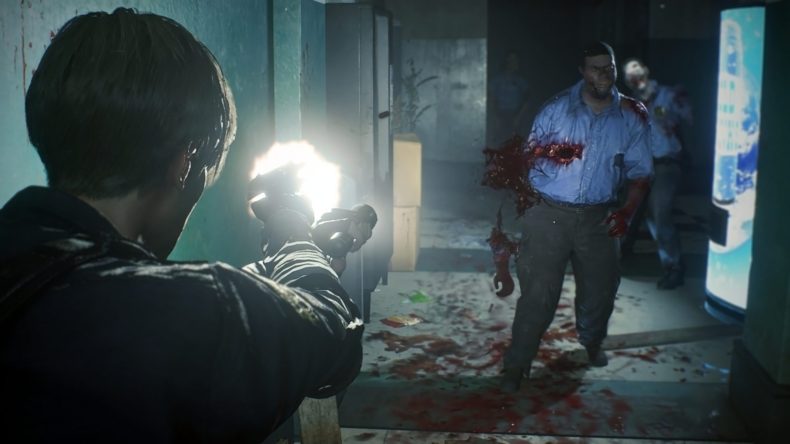 We're all familiar with this Leon pose by now (Image credit: Capcom)
Contents

Capcom has experienced a phoenix-esque resurgence, and just in a matter of years—has gone from one of the most maligned developers to one of the most respected once again. It is all set to claim 2019 as its own, with two of the most anticipated releases of the year—DEVIL MAY CRY 5 and RESIDENT EVIL 2. While we’ve talked about both games a lot, and will continue to do so—let’s put a spotlight on the one that’s closest to release.

After more than a decade of fan requests and anticipation, the much-vaunted survival horror classic has been reborn for the current generation. All signs point towards it rocking the world once again, 20 years after it did it the first time. Let’s take a look at how and why the RESIDENT EVIL 2 remake is setting out to be something really, really special:

As it’s been observed, the game has retained the ‘over the shoulder’ perspective of its direct sequel, RESIDENT EVIL 4 . This one, however, has not gone off the deep end like RESIDENT EVIL 5 and RESIDENT EVIL 6 and has kept the action close quarters, intense, visceral and with a major focus on resource conservation and weapon switching. It has also gained back a lot of its incredibly gratifying gunplay that made RESIDENT EVIL 4 so amazing. The impact is felt through each and every bullet fired and seen through the brilliant, horrible flesh wounds and decapitations you seem to leave on the undead. There never has been quite a game with this level of visible enemy damage and dismemberment. Dead Space used to be the gold standard. Now it seems to be this.

RESIDENT EVIL 4 captured a whole new vibe of visceral, addictive combat that was often imitated but never duplicated ( even including its sequels and spinoffs). Here, it seems to make a return. Even watching Leon shotgun a zombie on its face, or a hideous sewer creature on its glowing weak spot takes us back to the days we used to marathon multiple RESIDENT EVIL 4 playthroughs. Can’t wait to do it again with this one.

Resident Evil 2 was a technical marvel back in the day. Aside from being the best looking game around at the time, it also managed to fit FMV sequences on a cartridge on its N64 port—a task that was previously thought impossible. Capcom spared no expense back in the day of pushing themselves to their absolute limit and that’s what they seem to have done here as well.

Capcom has managed to amaze yet again with its visuals. The RE engine may have gone for a test run in RESIDENT EVIL 7, but here it seems to have finally gotten its first real job. The characters and environments look frighteningly detailed. The lighting, mood, atmosphere, and sound look like the best in the industry. More importantly, the staggering amount of accuracy, precision, and attention to detail that has gone in recreating each and every aspect of the raccoon city police station is borderline OCD level, and demonstrates a true devotion towards the 1998 classic, by the people who made this game. Everything old does seem like new again, and it’s about damn time.

The Tyrant/ Mr. X was one of the most memorable parts of the original game. This hulking, near-invulnerable behemoth popped up in specific moments in the original game, making for a really fun fight-or-flight scenario (something which was expanded in its sequel). In the remake though, he is a random AI, echoing the innovations made in games like ALIEN: ISOLATION. Here, you never know what is around the corner as this giant asshole may pop in at any point and send you back to the ‘YOU DIED’ game over screen in a manner of seconds.

Great mix of both old and new:

The game seems to have expertly blended the strategic combat-focused approach of landmark RESIDENT EVIL 4, with the more exploratory aspects of the well…landmark RESIDENT EVILS 1, 2, 3 and CODE VERONICA. The result is something that will hopefully have its own unique feel. Sure, RESIDENT EVIL 7 tried something like this, but its lacking variety, dull color scheme, and repetition that was not fun, made it feel somewhat less significant than other RESIDENT EVIL titles(Say whatever you want about 6, but it has no shame in going all out). It felt like the game was playing it too safe, trying to cater to a mainstream horror loving audience. This, however, seems to be catered directly to those who have been begging for a remake for the last 15 years. And that’s a great thing. If it brings even newer players into the fold, then nothing like it.

Resident Evil franchise became known for its many positive attributes—but there’s no denying it had its own unique feel. It’s hard to pinpoint exactly what that is, but its probably a mixture of tongue in cheek camp, great gameplay, exploration, level design, progression and hammy (but still great) storytelling that makes it so special. You know you’re in a Resident Evil game, every time you encounter one of these. The franchise has a long history of memorable moments, quotes and scenarios that are still meme’d and quoted to this day—be it ‘Jill Sandwich’ or ‘Whaddaya Buyin’—it has never lacked instantly iconic moments.  It’s good to see that the remake is so incredibly faithful to the design of the original so far and surely has more tricks up its sleeve. It has ditched the wannabe‘western’ aesthetic of RE7 and has gone back to staying true to itself. Despite the AAA quality production values, it still feels like a really fun, campy, B-movie at heart. And if the fates align—that is everything it will be when it finally hits next month.

What are your thoughts? Are you excited to play this game next months? What is your favourite game in the series in general? Let us know in the comments below