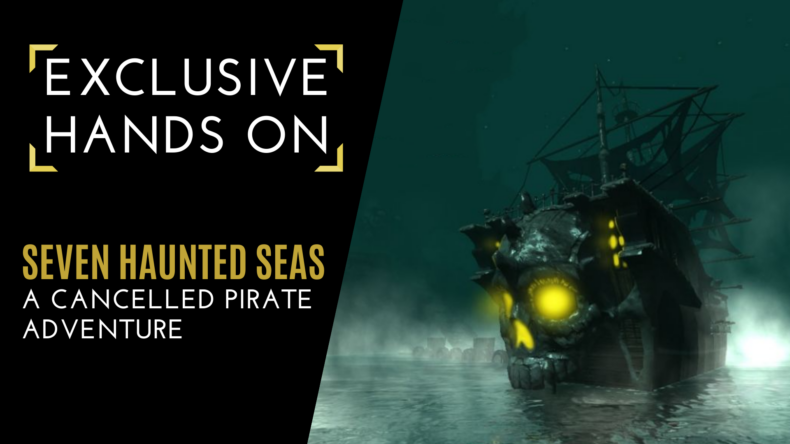 2009 claimed a lot of casualties in the gaming world. Bully 2 was canceled, with Bioware’s Revolver (Jade Empire’s Sequel) and the Polish FPP Supernatural Slasher Hellion: Mystery of the Inquisition also following suit. We lost a lot of fan favourite studios, such as Midway, Pandemic and 3D Realms, though the latter would eventually make a comeback – albeit on a much smaller scale. It was a tough year for the industry, but it’s nice to be able to look back at what could’ve been, and shine a light on some projects that never came to fruition. One such project is Titmouse Games’ Seven Haunted Seas.

An offshoot of Titmouse Animation, the animation studio that brought you Adult Swim’s Metalocalypse, Titmouse Games were originally formed to create a Dethklok mobile game. The team ended up with a pitch for a collection of flash mini-games centered around each character from the show, and it is apparently a lot of fun. Murderface’s game would’ve been centered on either shaving, or dating – whereas Skwisgaar’s game would be a drink-a-thon. This was originally planned to lead on to a number of Adult Swim based mobile games, but unfortunately, Adult Swim found the pitch to be too ambitious, and it never reached a stage beyond this initial pitch.

Titmouse Games included some pretty big talents, with Chris and Shannon Prynoski, owners of the animation studio hiring a small workforce to handle the games. Ex-Neversoft Aaron Habibipour was hired as the Creative Director, and it was already very clear at this stage that creativity was Aaron’s strong suit. Prior to working at Titmouse, he had acted as the Art Producer on the incredibly underappreciated vampire western Darkwatch, as well as Art Director on one of the earliest online Xbox titles, Iron Phoenix – both titles that oozed with style. Also on board was ex-KingIsle Entertainment Character Artist Dasha Bolotina, Animator/Writer Kevin Bertazzon and sole programmer Athanasios Ikonomou, who had worked at Spark Unlimited for almost 3 years before joining Titmouse.

What was to be their debut project, Seven Haunted Seas was conceptualized as a 2D side-scroller, with an over-world map that could take you between islands. It was said to fit somewhere within the Metroidvania subgenre. This idea was pushed to the side early on, in favour of a much-grander scale project heavily inspired by The Legend of Zelda: Wind Waker. This new concept was said to be very ‘edgy’, and would’ve taken a Deadpool-like approach to breaking the fourth wall, and even parodying industry tropes.

The game would cast you in the shoes of Scurvy Pete, a short, fat antihero pirate who had been brought back from the dead to right his wrongs, however unwillingly that may be. He’d need to traipse around an open-world via land and sea and hack and slash his enemies to smithereens. The humour really seeps from the short amount of footage that’s out there, and even the way Pete waddles has been seasoned with a stylistic oomph.

Seven Haunted Seas was set to have a companion cartoon too, presumably on Adult Swim, and would’ve received seasonal story updates, as a way of blending the two mediums. This was a long while before games as a service and sounded a damn sight more ethical than the seasonal lootbox fillings that are injected into games today.

I was lucky enough to learn about what happened to the project, and even experience a hands-on playthrough of one of the game’s prototype builds. Whilst not a complete representation of what the final game was set to become, the prototype still managed to shine light on a lot of areas the team was focusing on at the time, and it showed a lot of promise.

The prototype thrust me onto an island almost immediately, surrounded by beautiful seascapes and a magnificent art style. Tasked with finding my sword, I wandered around the peak of a mountain, acclimating myself to the control scheme, ready to slay. Lunging my cutlass from the nearby grassland, I set off on my way down the spiraling cliffside.

Almost immediately after reclaiming my trusty blade, I encountered both a cultist and the game’s combat system. Scurvy Pete jumps about like Yoda in the Grand Convocation Chamber battle with Emperor Palpatine at the end of Revenge of the Sith, and it’s entertaining to no end. The player would also have access to a minigun arm in the final product, and it’s a shame it wasn’t up and running for this demo as it would’ve added some depth to the one-button combat. Luckily, the one-button combat system was functional and interesting enough to keep me playing.

As I made my way down the mountainside, I encountered a few quest markers. A gravestone issued me with a quest to avenge the death of its occupant, and I had to kill a certain number of cultists to do this, waiting outside their spawn points with my curved blade in my grubby grip. I can see this would’ve been a very interesting way to implement quests in the full game, and I’d have liked making my way across the ocean to complete quests on different islands.

Close to the end of my experience, I was accosted by a much larger foe, a sub-boss adorned with a deep-sea diving helmet – looking somewhat of a mix between the Big Daddy from BioShock 2 and the diver statue that sits at the bottom of your friend’s fish tank. Whilst not a particularly difficult battle, it was cool to see the variety in enemy types, and that your opponents would require different levels of skill, and different strategies to take down.

The last segment of the prototype began when I hopped onboard a ship. Not only could I get behind the wheel and sail to my heart’s content, but I could also walk around the deck and man the ship’s artillery. I had a lot of fun here, and taking on the enemy ship the demo threw at me was riveting. Whilst behind the wheel, I could fire the side cannons – and lining up the shot perfectly took some practice – but was ultimately very worth it. This segment felt rather similar to the PS2 exclusive Deep Water – albeit with a much darker, yet humorous tone than the light-hearted Kraken-battler from the shores of Japan.

Unfortunately, the product would be float away in the industry crash in 2009 as financial difficulties claimed Seven Haunted Seas as one of the years many casualties. Although getting close to a publishing deal several times, publishers felt the project was too risky, and didn’t have enough broad appeal. Various publishers asked for drastic changes to the games tone and character, but the team at Titmouse felt this would be abandoning their original vision, and declined.

A large portion of the game was functioning at the time of cancellation, with the open-world, land and sea combat and arm gadgets all basically ready to go. A system was implemented with massive sea monsters that would roam the dynamic, stormy seas and a number of the islands had dungeons that were working too. The only issue was funding.

The rights to Seven Haunted Seas remain with creative director, so we might just see Scurvy Pete show his chubby, dead little face again at some point in the future, but for now, nothing is on the cards. Would Seven Haunted Seas have been something you’d have played had it released?