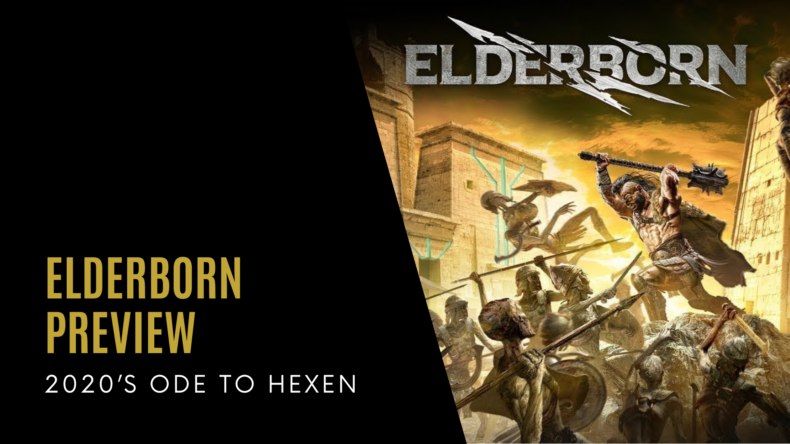 If there are two genres that have gone through stages of pure oversaturation, you’d be hard-pressed to beat out first-person shooters and hack and slash games. We’ve seen plenty of God of War clones and DOOM-likes, but have we really seen them blended that often

Elderborn sets out to do just that, following in the footsteps of Hexen, Arx Fatalis, Warhammer Vermintide, and the canceled Hellion: Mystery of the Inquisition. In fact, Elderborn most closely links itself to Dark Messiah of Might & Magic, a game well renowned for its hilarious kicking physics and brilliantly paced combat. Proudly pinning itself as a Metal AF (Action Fantasy) Slasher with brutal FPP melee combat and souls-like/RPG character progression, and that’s actually a pretty accurate description!

The first project to come out of Polish indie developer Hyperstrange. Forming in 2015, the then two-man team had met at studio Crunching Koalas, who had a hand in titles such as Frostpunk and Oh… Sir! The Insult Simulator. In 2015, Łukasz Jarząb and Przemysław Miliński saw fit that they should create a title based upon two of their strongest loves, metal and video games, forming Hyperstrange. Eventually, the duo would go on to hire a handful of additional staff members to help them with Elderborn, but how did it turn out?

The game doesn’t put a whole lot of eggs into the plotline basket, with a cobbled-together idea about uncovering the secrets of an ancient city carrying the gameplay along as a reason to visit new environments and levels. A light story works perfectly here, as it does in games like Painkiller and Serious Sam. You’re constantly decapitating hordes of enemies in Elderborn, and you don’t really want to be weighed down with otherworldly responsibilities whilst doing so.

I have no doubt that the combat is the element that’ll draw you to the project, and it doesn’t disappoint once you’re in either. Light and Heavy attacks have always ruled the genre, and it is no different here in Elderborn. You’ll also carry over that ridiculously fun kick from Dark Messiah, and it’s just as fun here, especially when there are slopes or spikes involved. A heavy attack carries with it the chance to lop off the heads of your foes, and sending the skull of a feral creature flying across the screen doesn’t really get old.

Don’t worry if your weapon starts to feel a little stale though, as Elderborn equips you with a weapon for every situation imaginable in close quarters. Spears, Swords, and Warhammers make up for a strong basis, with exotic weaponry such as Khopesh and a big ol’ club with a skull on the end. Though it would be nice to have some ranged options, like a crossbow or perhaps magic abilities, I can see what the developers were going for here, and really appreciate it.

For those of you easily put off by difficulty, the souls-like part of the game is not a reason to turn away. The mention of FromSoftware’s series does not relate to how hard the game is, but more to its essence system. Each kill or smashed barrel will credit the player with essence, that they can use to level up at a fountain (save point). If you’re killed before reaching a fountain, you will drop your essence and will have one shot to reclaim it before it disappears forever. Each level up allows you to put points into three different skills, effectively Strength, Speed, and Health.

There’s a very strong charm to the level design in Elderborn. Kicking off in a dimly lit dungeon and interlocking cave system, the game has a lot of room for secret areas and hidden items to track down – it makes you want to explore, and it makes you want to replay it to find more weaponry, I missed a weapon or two in my first playthrough, but by my second run at it, I was stabbing enemies left and right with my Voldo-esque Katars. The second level is a stark contrast from this, taking place in a wide-open and bright cityscape, with tall scaleable buildings and an awesome centric puzzle. Without a doubt, the level design was a huge priority for Hyperstrange, and it’s really paid off.

I’m not really one for modern gaming, and I have slowly felt myself becoming more and more drawn to the simplistic handheld market of yesteryear recently, yet Elderborn has reminded me that gaming isn’t dead, and never will be. I consider Elderborn a bit of a stand-out, a Rainbow in the Dark – if you will. A strong recommendation from me on this one.

Elderborn leaves Early Access on January 30th, be sure to pick up a copy on Steam.