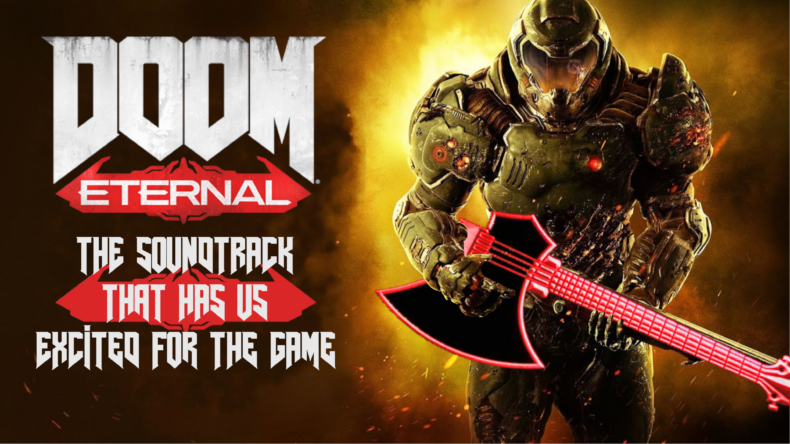 When it comes to games, music has always given an extra layer of context to player actions and locations. Would Super Mario Bros 3 be the same without its overworld theme? Would bosses from the Soulsborne games be the same without the hauntingly orchestral scores? The same is true, especially for first-person shooters. There is Doom, Duke Nukem 3D, Shadow Warrior, Quake, Blood, Half-Life whose soundtracks have become a part of my life like any normal album. On 20th March 2020, DOOM Eternal’s Soundtrack will hopefully join that pantheon and that has got me super hyped. If you’re someone like me, you should be hyped as well because of the following reasons:

DOOM 2016’s music grips you right from the beginning, even before you start playing. Hellwalker, the menu theme, has some “Signs of Evil” from the classic game. It starts with a slow build-up, revs up and hits you in the face with a brick wall. Not very different from how someone would rev up the engine of a Ferrari before shifting gears and going from 0 to 60 MPH in 2.5 seconds. Before you know it, you have spent a good chunk of your [Steam] refund window sitting just tapping your legs to the beats of Hellwalker.

The game proper begins when you take the elevator up to the Mars surface. What a glorious title screen it is. As Dr. Samuel Hayden (voiced by Darin De Paul) tries to justify the horrible events of the past 24 hrs, the slayer clenches his fists in anger while looking at a dead body(product of scientific research), and proceeds to break the communication device. This is the moment when you meet your old friend who is back; more buffed up than ever. YES! “AT DOOM’S GATE” plays, reimagined, reworked and reforged with 9 string guitar(that Mick gifted to Fredrik Thordendal of Meshuggah). What’s great about this dynamic soundtrack is how it becomes a driving force for the player. It’s like you are in sync with your weapons and are dancing to a well-choreographed section of some grandly orchestrated music.

The soundtrack gets a lot of praise for being heavy but Mick also knows when to hold things back a little. The somber and the quiet moments of exploration highlight the bombast of the arena battles even more, making you crave your next big fight. Things start out with fairly hard-hitting riffs like “Rust, Dust and Guts” and by the time you reach the endgame, you get to hear tracks like VEGA Core and SkullHacker which are much more abstract in quality just like the complex arenas in this part of the game. Personally, I am super hyped to see what this genius has accomplished with the talented vocalists of the Heavy Metal Choir(Rest in peace, Nature Ganganbaigal.) I can’t wait to find out all the old soundtracks that have been reworked if there are any in DOOM ETERNAL. I am betting on this soundtrack to be in my top 3 heavy metal album of 2020. Bring it on.

Beneath how the soundtrack makes you “feel,” there are a lot of things going on. Compared to its contemporaries, DOOM’s soundtrack has a really precise and surgical quality. It is not trying to have layers upon layers of harmonies. It is distinct, and most importantly dynamic.  Or in the words of Mick Gordon- “It has a sense of immediacy”. As a guitarist or a gamer, watching Mick Gordon talk about his production techniques has been infinitely interesting.

From the chain of pedals that uses distortion effects, compressors and such to morph simple sin waves and bring out the noise that gives this soundtrack a very industrial tone, to using an old soviet synthesizer called Polivok to play the signature tune in BFG Division.]

This whole out of the box thinking always reminds me of the movie title “Eternal Sunshine of the Spotless Mind”. Anyone who is dedicated enough can implement these techniques and tools to their own work. Not to mention, Mick has used CHAINSAWS to produce music! Yes, you heard that right, DOOM’s HELLWALKER uses the sample of chainsaw sound in it.Add to this the creative energies of the sound designers Ben Carney and Chad Mossholder, it feels like you are the final member of this band. Your weapons and the game’s SFX acting as your own instrument. Every glory kill triggers an endless riser, that lets you refocus before you shred[THE DROP].

This is all by design. Calculated, as they say. The sound designers made sure every sound in the game was on the same scale as the soundtrack itself. On the humorous side of things, Mick managed to sneak in satanic figures in the soundtrack as easter eggs. So, this time around there will be a race to dissect the soundtrack to find more of these funny easter eggs. I can’t wait to see the process that went into DOOM ETERNAL and what new innovations they have added because Doom is not restricted to Hell and Mars anymore.

2020 is going to be an awesome year for video game soundtracks. What makes this so interesting is how any approach to writing a soundtrack can work if done with creativity and ingenuity. Take for example Kelly Bailey of Half-Life series, whose approach is totally different to Mick’s but “it just works.”[Betcha thinking of TODD HOWARD?] Then there are the interdimensional higher power beings like Keiichi Okabe who, using the right combination of notes, can summon ninjas to cut onions around you[Damn you Pascal’s village.]

Video game music has come a long way from chiptunes to where we are now, yet Chiptunes can still be used effectively in a modern video game if done well. There are many more talented composers at work today, some producing music in their bedroom, some traveling to far corners of the Earth to get inspiration and collaborate with similar minds for the projects. A good thing to follow in these times is to not pit soundtracks against each other but to enjoy the variety that exists in the industry. Personally, I am looking forward to Ori and the Will of the Wisps, Half Life: Alyx, Cyberpunk 2077, Ghost of Tsushima, and of course the Animal CrossingxDoom Eternal crossover which will eventually happen! What an exciting time to be a gamer!