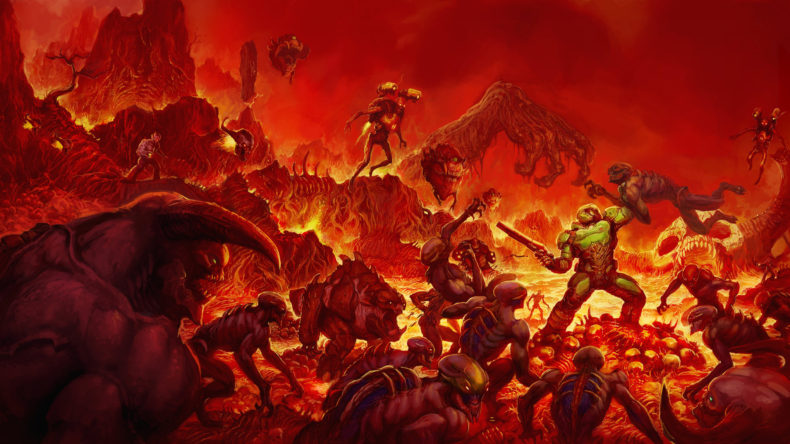 "Hell is no walk in the park"
Contents

ID Software’s seminal FPS franchise has finally completed a quarter of a century. And judging by how incredibly active the community is to this day, and how omnipresent it is still in cultural conversation—it can be said that it has proven to be eternally evergreen (No one saw this pun coming. Hehehe)

There’s no denying the power of DOOM as an industry icon and a pioneer of the FPS genre.  It is the very epitome of 90’s gaming, where player agency and expression were key, and games strove to push the boundaries of what was possible—both in technology and in ideas. If there was a game that epitomizes that particular era, It’s DOOM.

Even now, it’s staggering to see how simple (at the core) its ideas were, and how it managed to execute them to a nigh-perfect degree. The game required just one basic task: shoot demons till they’re dead. Yet it was so perfectly designed , weighed, measured and executed—that it was never really meant to get old. Ever.  It was built to last as long as the player was in the mood to have fun. Be it two weeks, or two decades.

This was in the days of early 3D, and yet the game seemed to pretty much nail whatever was required to be everlasting. The insanely crunchy combat and amazing enemy types were well met with what can surely be called as precognitive level design. While there are some that are lacking (in both DOOM 1&2), most of these laid out the groundwork for how to design maps in 3D and stand tall to this day, as an example of timelessness. Not only do they hold their own against games from 2018, but they surpass most of them in almost every aspect.

On a personal level, DOOM also served as my introduction to pop culture in general. In my country, the information age had just begun to show its potential, times were changing and (then) eager kids like me were just being exposed to all the great things that western peeps had already been taking for granted throughout. As a perpetually restless only child with a hyperactive mind, and a constantly changing peer group (you know how school is), there were many moments that I would find myself alone in confusion and a dazed state of mind. In those moments, DOOM served as a cathartic release. As a kid with a limited understanding of the world, I could sometimes not make sense of it. In those moments though, I could always plug in my DOOM floppy disk and forget about the world for a while.

DOOM is also very noticeable for its satanic/ heavy metal aesthetic. The key difference here is that it is not forced or posing in any way. It makes great use of all the tropes one associate with that particular culture and filters it through a focused, tongue in cheek and badass vision. Aside from the gameplay, DOOM’s presentation has also stood the test of time. It isn’t try hard or forced, It’s just awesome.

DOOM has been reclusive over the year. It resurfaced as a (great) survival horror shooter with DOOM 3 in 2004, and then again in the (amazing) 2016 reboot for the newer generation. It plays its cards close to the chest, but somehow it always finds its way to the top. Not to mention, its legendary modding community, which still remains as active and as passionate as it was back in the day. If there’s any game that has been blessed with life eternal, It’s DOOM.

It’s gaming as pure expression. Filtering the need for creative expression in the form of cathartic violence as the player plows through the minions of hell in his/her own dance of death—in which the Doomslayer and he/she are one—and everything is ripped apart and torn until it’s done.