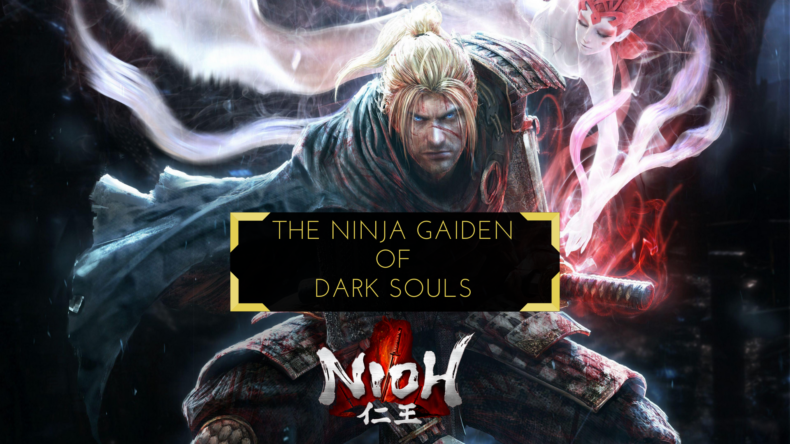 “This game is like Dark Souls“, a phrase that has been overused to the point of becoming a meme whenever someone uses it. Here on Gaming Purists, we consider using it as a taboo because we know that “Rolly polly≠ soulsy” or that a game being “hard” does not mean we attach Dark Souls behind its name to gain them clicks. Team Ninja, however, forced our hand the other way. It can’t be a coincidence that Ninja Gaiden Black was released (re-released?) after the sensational reception of Devil May Cry (no, not the second one) and that Nioh was released right after Dark Souls 3. Team Ninja seems to target these audiences of hard, niche action games and they usually succeed. Hence the 3 million sales on the 3rd anniversary is a great time to talk about it. Not to mention the impending release of the sequel as well.

In the most reductive, modernly journalistic way, if I had to describe Nioh this is roughly how it’ll be:

A faster, more complex Dark Souls’ combat focusing on combos with less emphasis on blocking and more on dodging. Chopping up the Metroidvania-esque world design of Dark Souls into smaller (sort of) mazey levels, a looter mechanic with color-coding quite similar to Borderlands and tons of number-based systems.

Disclaimer: I am aware that players can make a blocking build with dual swords. I partially did this with an armor set (Warrior of the West) that let me tank 50% of incoming hits without any loss to Ki, the stamina equivalent of Nioh.

At first, Nioh can seem overwhelming to new players, even Dark Souls players. Nioh’s focus on combat is what separates it from Dark Souls. It is more fast-paced and brutal. The obvious initial changes lie in the stances and stamina management. There are 3 stances, each with a weak and strong attack accompanied by a stamina management system that allows the player to regain Ki by pressing R1 at the right time. Then there is Ninjutsu and Omnyo as well. Mastering all these systems will take hundreds of hours. If all of that wasn’t enough, William also has a Devil Trigger-esque powerup called Living Weapon that increases attack power and makes the player invulnerable as long as it is active. Do keep in mind that the Living Weapon meter depletes much faster upon taking damage.

In fact, with enough dedication and time in the game I would say, Nioh can be converted from a Souls like to (almost) a character action game. There are 7 types of weapons ranging in conventionality from swords to spears to kusarigamas to tonfas. Each weapon has its own skill tree that allows players to interweave combos within stances. The skills start off being common for some weapons, but become different as the player specializes in one skill tree. For example, a very basic combo is starting off with fast attacks in a low stance and pressing the strong attack button to finish off in a high stance without needing to change stances manually; a common combo for most weapons. There is another ability that replenishes Ki if the player dodges instead of pressing R1 at the right moment.

I had rough beginnings with Nioh. After 3 restarts and 20 hours into the game, I finally started to “get” it. Coming from Dark Souls 3 where the shield could tank hits from bosses, Nioh’s emphasis on dodging rather than blocking was clear from the very start with the third boss, Hino-Enma. Ruthlessly paralyzing and practically one shot-ing the player was her specialty. As many have pointed out, she is probably one of the toughest bosses in the game considering how early the player faces her. Unlike the rest of the bosses in the game, her fight isn’t even preceded by any similar type of enemy.

The game does smoothen out after the first few areas. The player either progressively gets to grips with the combo system assisted with a proper build and understanding enemy attack patterns or inevitably figures out that the Dark Souls strategy of sticking a weapon up someone’s butt is the best method to beat almost anyone. The bosses are extremely fun with the exception of Umi Bozu. It is one of those despicable minion summoning bosses. I absolutely despise minion spawning bosses and despise it, even more, when the level demands me to complete arduous tasks to remove the minion threat.

Oh and bless those numbers. This game is ABSOLUTELY FILLED with numbers. The usual (and obvious) weapon levels, weapon stats, living weapon characteristics, character level, skill points, inventory management are already present. Nioh adds in familiarity with weapons/armor,  ‘REPUTATION POINTS’ which is basically the game rewarding you by micro-tracking everything you do in the game, glory which allows you to purchase character skins and emotes and is farmed through fighting revenants or I am guessing PvP (I wouldn’t know because the PvP is practically dead) etc. All of this makes the game feel like a huge mathematics problem. 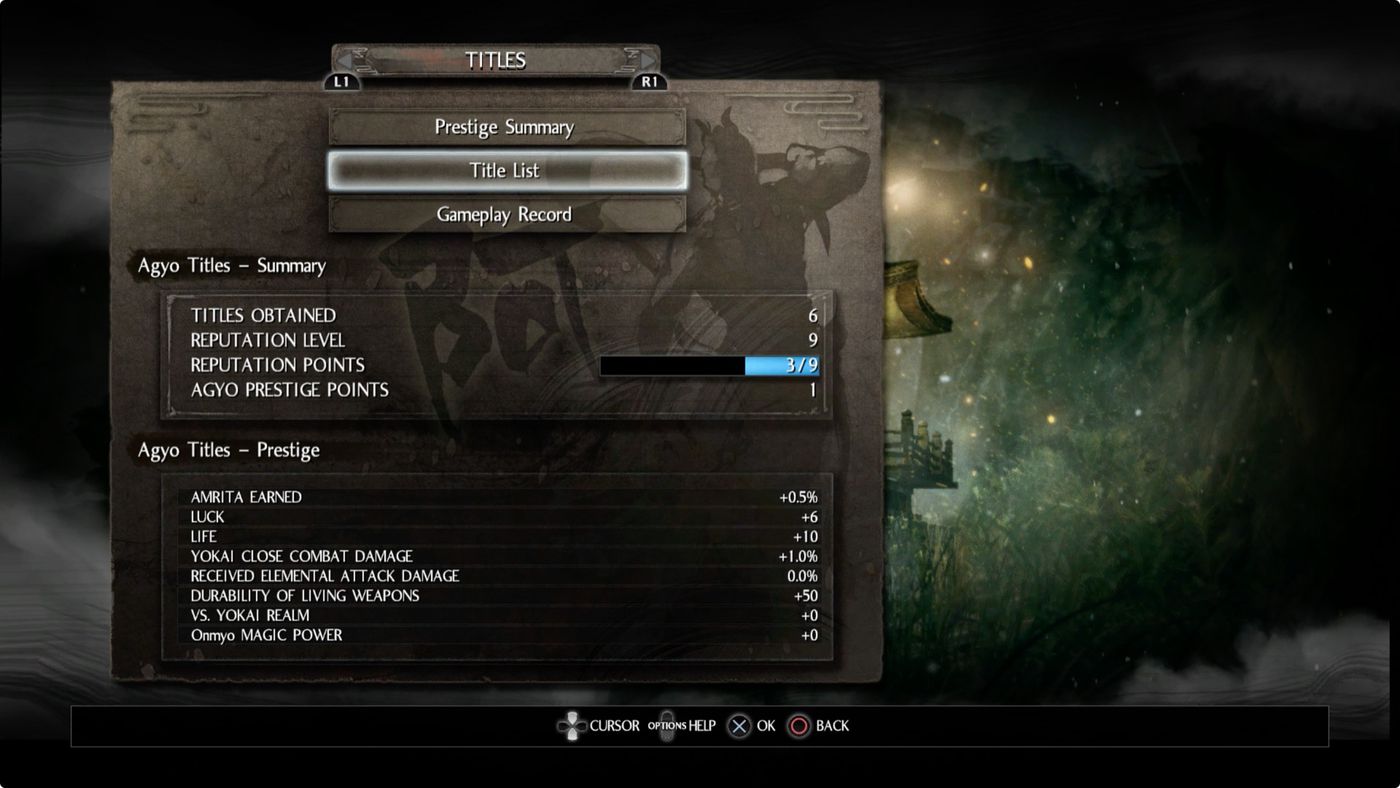 My main gripe with the game is its RPG mechanics. As is the case with most other RPGs of the ilk, grind is required. This results in repetitive enemies, countless weapon/armor changes and same missions. I wonder why Team Ninja decided to go this way. The RPG mechanics come in the way of one aspect I severely detested in the game- You can’t master all weapons in a single playthrough. And I don’t get this honestly. This could have been one of the best character action games to come out this gen or rather decade if the player was allowed to master all weapons in a single playthrough through one common currency.

It still is a game of the gen/decade competitor, but it feels like a missed opportunity. Having the ability to interchange between weapons and combining various weapons would have been fun. Not to mention, the roots of a character action game are easily evident with the game’s implementation of ideas. Its RPG mechanics feel as tacked on as open world mechanics do for modern mainstream games.

Who is this game for?

Having played Sekiro: Shadows Die Twice, Dark Souls 3 and Devil May Cry 5, Nioh feels like it falls in the middle tending more towards Souls than DMC. People love the souls games for the immense world building, interconnected maze-like levels, atmosphere, and deep storytelling. People who love DMC play it for the intricate combos, the over the top action with well-designed segmented levels and a good story(Talking about 3 here). So when you think about it, Nioh fills in spaces left by both franchises. Does it appeal to either of the communities? That’s uncertain. It is a divisive name in the Souls community while I have not even seen it mentioned often in the DMC fanbase at all.

Personally, I had an extremely fun time with Nioh once I started to ‘get it’. It has great enemy design & bosses, deep combat and decent customization options. The missed opportunity of making it purely an action game aside, if you are looking for a game that has a tons of combat centric systems while also being challenging, this game is for you.