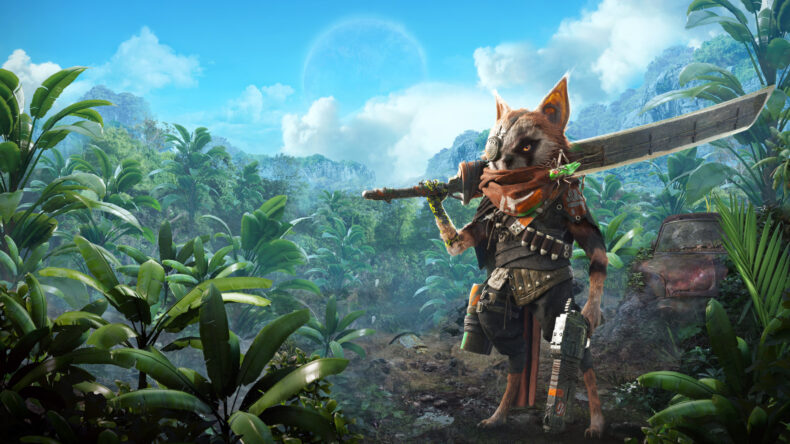 Back in 2017, THQ Nordic showcased this CGI teaser about a new project called Biomutant. Pretty vague, but intriguing nonetheless, featuring a furry being on the run from baddies. Soon after, we got our first look at what we now know is a whacky RPG debut from Swedish studio Experiment 101. Set in a post-apocalyptic fantasy land, it is described as a unique adventure with a heavy focus on gameplay customization and decision making. The plot has you, a customizable furry protagonist save the World Tree from a sickness that has overtaken it and threatens to destroy it via five World Eaters at each of its root.

One of the devs on the project confirmed the East Asian aesthetics of the game pick up a leaf from classics like Journey To The West and Kung Fu Panda. On the other hand it is heavily inspired from the likes of DMC, Batman Arkham, Metroid and Zelda as far as the gameplay and world design is concerned. The open world is a modest 8×8 km (backed by the studios’ past experience with Avalanche’s Just Cause games), including underground and underwater areas. The inhabitants of this post-apocalyptic land are both friendly and foe, like the talented Masters who aid the hero on their journey or the varied dangers which might actively hinder progress like opposing factions/tribes. Last but not least, the game also boasts a variety of traversal options: gliders, jet skis, jetpacks, mechs, submersibles you name it.

The Darksiders-like combat looks fluid and quite synergetic, especially when you consider the emphasis on crafting – including weapons, firearms, and literally anything in between, all thanks to items you find scattered throughout the land. But this is an RPG, and Biomutant prides itself on being one; this is reflected in almost every gameplay aspect, like the character creator – eg. the physical appearance determines stats, alongside specialization. The mutations system also grants the player new abilities by coming in contact with certain environmental hazards, like the “Psy” abilities that are the game’s equivalent of magic or the physical vairants which an alter physical properties.

Then there’s also the Aura karma system, which will affect the player’s relationship with NPCs and particularly the six factions – do you aid in uniting them? Or join one and destroy everyone else? Such decisions will also affect the kind of side quests you undertake

The malleable customization is the highlight here – it hasn’t really been done in any RPG before. If you make a buff character, its stats will by default be more geared towards brawling and close range styles. And this aspect can be tweaked further by another layer of welcome complexity bought in by the mutations system. It remains to be seen how effective this idea is in practice but early impressions seem positive.

The studio has been hard at work since the past few years, which explains the slow trickle of info – and that’s a good thing; we do not need another PR trainwreck spewing a lot of hot air *looks over at Cyberpunk 2077*. Regardless, Biomutant is a very ambitious game, especially for a studio of around ~20 people. Fingers crossed it hits the mark.

Here’s the latest trailer out right now to give you a gist of everything to expect:

by Karan Negi on January 14, 2021
Capcom finally released the demo for their upcoming Monster Hunter sequel, Rise, on the Switch–and after spending a decent amount of time with it, we’re happy to report that things are looking really solid. As not-hardcore fans of the series, [...]
Comments
Leave a reply