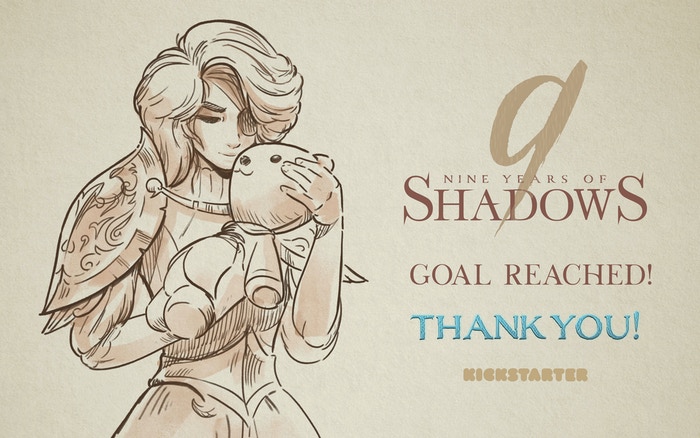 Developed by Halberd Studios, 9 Years of Shadows is a Metroidvania game influenced by genre stalwart Castlevania SOTN, that went under our radar when its Kickstarter launched on 25th of March, 2020. Unsurprisingly, the game reached its funding goal within 4 days of launch.

In the latest update that was posted today, the developers have reached their fifth stretch goal. Going off of their campaign page, this means that the game will feature more tracks from the composers: Michiru Yamane of Metal Gear Solid and Castlevania fame and Manami Matsumae renowned for being the composer of the original MegaMan – exactly why it caught our attention apart from the gorgeous pixel art-style and the obvious Castelvania aesthetic, so before you go “oh another indie sidescroller Kickstarter”, that’s something to ponder about.

Their previous update stated that they had also onboarded. His previous works include Zone of The Enders, Metal Gear Solid, Bayonetta, The Wonderful 101 etc. With all that being said, it seems this game is planning on being a musical powerhouse.

But what about the game itself? It’s about a warrior on her journey to lift a curse that has sucked all color from the world. As such, she must enter the mysterious Talos Castle equipped with a halberd (see what they did there?) and battle the darkness residing within to restore harmony to her world. The gameplay is just as you’d expect from the classics – so not much to add there. Music is something the developers are focusing on

9 Years of Shadows has a planned release date of December 2021 for the PC & Nintendo Switch. Here’s the Kickstarter page if you’re interested in checking it out. Are you excited for a new adventure harkening back to the roots of the genre? Sound off in the comments below.

Ever since his first gaming experience with Wolfenstein 3D at 6 years old, Siddharth has fallen in love with games across many genres. He's especially fond of RPGs, puzzlers and platformers and you'll never see him NOT gush about his Top 3 favorite games: The World Ends With You, Borderlands 2 and Okami.
You might also like
Indie ExplorationNews