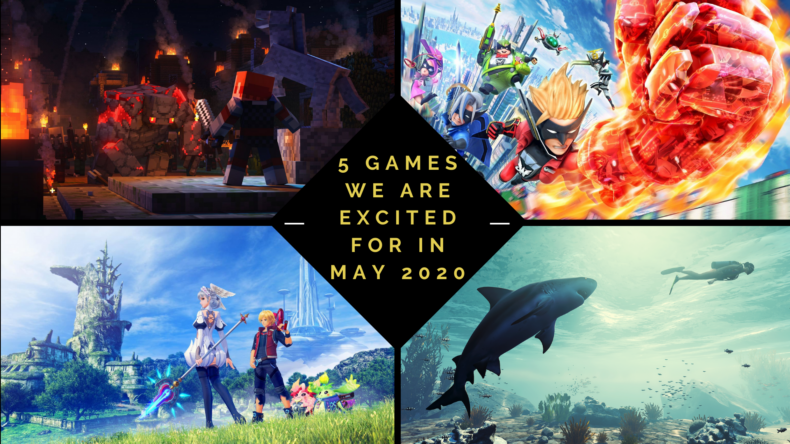 Each month brings in new games and experiences, and while the summers don’t really have many big hitters, there are still some upcoming games in May that we are excited for.

Not many games out there that let gamers unleash havoc as a wild animal. However, Tripwire Interactive’s upcoming action RPG aims to fix that as it puts players in the shoes – or uhh, fins? – of a bulky bull shark. Out seeking revenge for the death of it’s mother, our razor-toothed aquatic protagonist must explore the vast oceanic open world replete with objectives and collectibles. Battle humans and other creatures alike on the journey to become the biggest, baddest monster the underwater world has ever seen – and since it’s an RPG, expect progression mechanics as well.

Considering that the devs have a fairly good track record, what with titles like Killing Floor 2 and Rising Storm 2: Vietnam, this might just turn out to be a brutally awesome experience. It’s out on May 7, 2020 for PC (Steam) PS4, XB1 with a Switch version later in 2020.

Certainly the most unknown game on this list, but it’s interesting enough to warrant a spot here. Arboria tells the tale of a Yotun warrior who must venture into the mysterious depths of the Hole to save his tribe from the wrath of the gods.

It’s nothing groundbreaking – a third person action RPG with procedurally generated dungeons, loot to find, enemies to kill and get stronger. Yet it’s the humor and artstyle that grabbed our attention. Arboria launches on PC via Steam on May 7, 2020.

Mojang’s Minecraft continues to be one of the most beloved games in existence even after a decade of its initial release date and it’s hard to disagree with that sentiment given how versatile and enjoyable the core survival & open-world gameplay is. In fact, it’s popularity has boomed enough to spawn other video game spinoffs like Minecraft Story Mode by Telltale.

Now publisher Xbox Game Studios has yet another spinoff in the works: Minecraft Dungeons. In simple words, it’s a roguelike dungeon crawler RPG set in the Minecraft universe – featuring upto 4 player co-op. The initial reveal kind of underwhelmed at first, but it grew on us soon after. Here’s hoping for a Steam release  It’s out on May 22, 2020 – for PC (Windows Store), PS4, XB1 & Switch.

Ask any JRPG fan to name some of the best titles from the genre, and Xenoblade Chronicles is a name you might hear more than a few times. This cult classic RPG blew minds when it came to the scene almost a decade ago. And now, it’s upcoming 2020 remake titled Xenoblade Chronicles: Definitive Edition looks to do the same.

Publisher Nintendo and developer MonolithSoft amazed everyone with how much they accomplished technically despite the Wii’s limitations – a large, seamless open world teeming with alien wildlife? Check. An emotion-rich rollercoaster of a plot? It’s there. Well written and acted cast of characters? Present. Robust and deep combat? Accounted for. Xenoblade DE drops on May 29, 2020 exclusively for the Nintendo Switch. We hope it delivers.

With the exception of Bayonetta 2 and NieR: Automata this gen, Japanese developer Platinum Games and their offerings have been heavily slept on by the mainstream. Hopefully that changes, with their upcoming remaster of The Wonderful 101. Never heard of this game before, you say? We’re not surprised.

It was a 2013 Wii U exclusive that allowed the player to control dozens of tiny superheroes at once, who can shapeshift into “weapons” to beat the living daylights out of the game’s baddies. Very over the top action as is expected from Platinum, supplemented by a healthy dose of a Saturday morning cartoon artstyle and humor. Of course, it didn’t sell well given how unpopular Nintendo’s previous console was so this remaster aims to rectify that mistake and deliver one of Platinum’s most unique experiences to a wider audience. We’re getting our hands on this one for sure. PC, PS4 & Switch owners will need to wait til May 19 (NA)/May 22 (EU) 2020 for the game’s release. Unfortunately, it looks like XB1 fans will be sitting out this one.