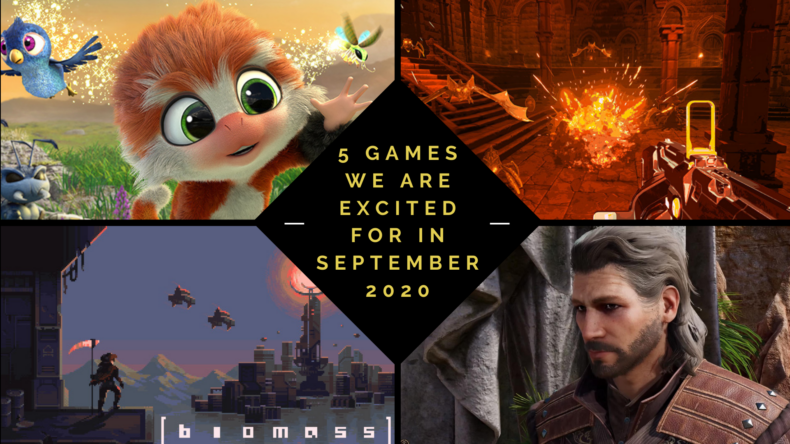 As we enter the holiday season, game releases will start ramping up, with September acting as the transition month into what I like to call “Wallet Looter” months, literally and figuratively. Massively budgeted ‘products’ aside, there are many overlooked gems that will likely drown in the sea of game releases, vying for your attention, and perhaps failing. As such, here are a few of them that just might be worth your time and money.

A game that has been delayed a few too many times yet keeps our interest is Biomass. Set in a grim world where lightsabers exist in the same technological realm as conventional modern guns, Biomass is essentially a 2D-post-apocalyptic-Souls like with some gorgeous pixel-art. You can expect a ton of bosses, many character builds & weapons, some eccentric personalities, unexpected alliances, a reactive world and much more. A demo is available here on Itch.io for those willing to try out an earlier version of Biomass.

Tamarin is the kind of game that you can show to anyone and receive an “Awwwww” reaction in return. A platformer that looks as cute as it is trying to bring back the goodness of a bygone era, Tamarin follows the adventure of this fluffy little Tamarin on a quest to save his family. With Rare Studios veterans at the helm of the project, we have high hopes from a game that seems to have an excellent pedigree going in.

Honestly, I think no one expected a sequel to Baldur’s Gate 2: Shadows of Amn, one of the most influential CRPGs of all time. Yet here we are, with Baldur’s Gate 3 early access not just launching late next month but also being made by a developer that couldn’t be a better fit for the job: Larian Studios, responsible for the stellar 2017 RPG, Divinity: Original Sin 2. To cut to the chase, these guys know what they’re doing and are quite pro-consumer too: hell, if the studio’s CEO playing an alpha build of the game in front of an audience isn’t proof enough of their clarity, I don’t know what is.

While Baldur’s Gate 3 might seem like Divinity: Original Sin 3 to many, particularly with it’s shift to a turn based combat system, it will rest assured most certainly be a very good RPG, if not at least half as good as it’s prequel.

After a decade long wait, Croteam is bringing back their flagship franchise to the current gen market. Old school shooters have had some pretty small footprints this gen, minus efforts from indie devs what with old-school throwbacks such as Amid Evil, Dusk and Wrath: Aeon Of Ruin. But it’s about time the AA budget kings make their comeback, and there couldn’t be a better choice than SS4.

Do you like Doom? Do you like raging to the tune of some good old rock music? If your answer to both questions is an astounding yes, then this game might be for you. BPM feels like a sensory catharsis. It satisfies the internal need to sync action with music. Essentially, it is a rhythm-action FPS rogue-like where you must shoot, jump and dodge to the beat of an epic rock soundtrack. Now I am not one who looks for rogue-lite experiences, but the core gameplay seems too tasty for me to dismiss this based on a (possible) triviality.