5 Games That Might Go Under Your Radar in May 2020 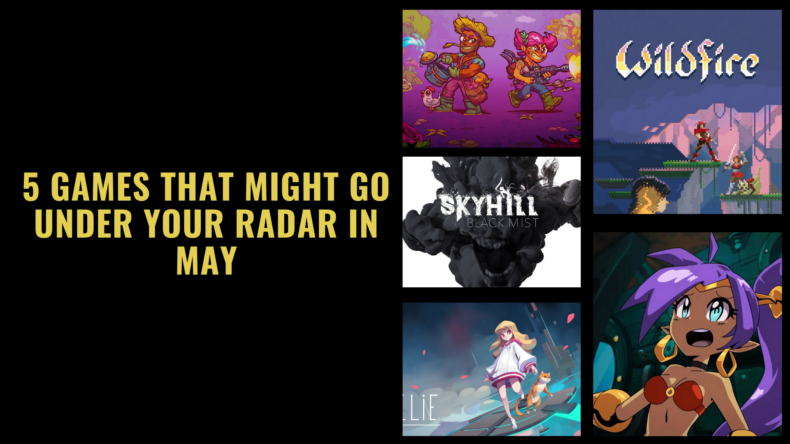 We’ve already talked about some of our most anticipated games of May 2020. Despite a fairly lukewarm month, these include a few games by big names that are likely to grab everyone’s attention. Yet, the steady influx of indie games even in this COVID-19-reigned period of time continue to deliver interesting experiences that are bound to go unnoticed. So here are a few games that caught our attention and we want you to take a look as well as they might go under your radar –

Timelie is a stealth puzzle game featuring a young girl and a cat who must sneak past robotic enemies inorder to escape their prison – a surreal world teeming with danger. Their aid comes in the form of time itself, as the game allows the player to rewind and move forward time to undo mistakes and watch the future respectively. The game just has this air of isolation and danger and the simple celshaded artstyle reflects that too. It will also allow controlling both characters simultaneously for strategic and satisfying challenge. Will the girl and her feline uncover the secrets behind the mysterious dimension they are trapped in? Only TIME will tell *wink wink*

Another stealth title on this list, Wildfire is also a 2D platformer putting the player in the shoes of a supposed “witch” whose hometown has been taken over by the nefarious forces of the Arch Duchess. Like something out of Avatar: The Last Airbender, you must call on the powers of the elements – of fire, water and earth – to save your fellow villagers from captivity. In addition to genre-default stealth systems, you can set environments ablaze, freeze foes and grow vines across the obstacle ladden landscapes that beg to be traversed. All of this sounds like it will be a very organic, immersive experience. Here’s hoping its good.

One very odd game here but we aren’t complaining. In something that can only be described as Stardew Valley x Plants VS Zombies with a sprinkling of Binding of Isaac, Atomicrops is a farming sim/roguelite set in a post apocalyptic world where plants have mutated into living creatures – right out of a whacky cartoon show. Grow mutated harvest, fend off violent beasts that seek to devour your crops, upgrade your farming gear and recruit new animal allies to aid your quest to become the best farmer in the wastelands.

You wake up in a luxurious apartment only to discover your daughter’s missing and the building is overrun with an unnatural black mist and dark creatures out to kill – that’s the basic premise of SKYHILL: Black Mist described in one sentence. Now uncovering the mystery to this phenomenon and tracking down your family is up to you. The trailer reveals survival and roguelike elements as well as a “play how you want” approach to gameplay as you can either get right down to business by cracking some skulls and take the silent way out via stealth – plus there are various locales to explore, items to find and craft and secrets to uncover. Are you ready to find out the truth?

Ever since its inception on the Gameboy Color back in 2002, the Shantae games have had a cult following. Developer WayForward will be bringing the newest entry, titled Shantae And The Seven Sirens to consoles and PC soon. This time around, the purple haired dancer Shantae’s visit to a tropical island turns sour when she discovers a sprawling labyrinth (hint: it’s a Metroidvania) underneath. Her robust platforming, exploration and transformation arsenal will be put to the test as she faces the Seven Sirens in battle. Each biome looks noticeably unique with exclusive types of enemies, puzzles, environments and bosses. Fans of the genre would do well to check it out.